Lower the Temperature With the Best Window Fan

As the temperature continues to rise in most parts of the world, keeping your house cool and managing your utility bills are important. A window fan provides both these functionalities and is the best pick for these summers. You can easily mount these devices to the window frame, and air circulation will bring in the cold breeze. The best thing about a window fan is that it consumes way less energy than an air conditioner.

Although window fans are mainly bought for rooms, they are perfect for your kitchen as well. It will not be wrong if we say that a window fan is a primary and vital asset for the kitchen.

There are not many high-tech features in a window fan, but to buy the top window fan in 2022, you need to look at some specs before buying. 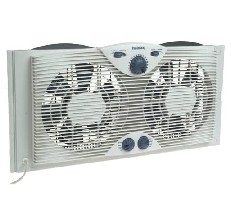 If you are looking for a window fan that fits into a slider window, then Holmes dual is your option. It has an adjustable screen and an extender panel as well. Thus, it helps to secure the fan even in large windows. It is a reversible fan so that you can use it for intake as well as exhaust. You can plug the power cord into a 120 AC outlet.

The best thing about this window fan is that it has a thermostat that works perfectly and helps you maintain a comfortable environment. Furthermore, it has a dual blade operation and three speeds setting as well. Some other additional features like water resistance and a three-year warranty persuaded us to put this window on our list. 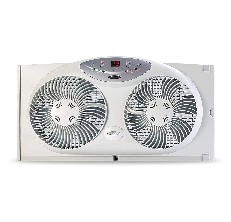 Our next window fan is from Bionaire that has proved its excellence with the twin 8.5-inch reversible blades. The reversible blades allow you to enjoy a cool temperature in humid and dry weather. It can perfectly pull in cold air and draw out hot air. The best thing about this fan is the LED display that allows you to control the settings more efficiently and quickly. To provide more ease of use, it comes with remote control and three speeds setting as well.

You can perfectly fit the window fan in a vertical slider and double-hung. The extenders allow you to customize the fitting of the fan by providing 13-inches high overall and 8.5-inch with the fans. The only disappointing feature of Bionaire is the thermostat. The programmable thermostat is supposed to turn on and off to maintain a comfortable temperature level, but it does not function properly. 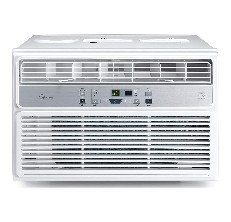 As you have already read, MIDEA provides 3 in 1 functionality because it combines an air conditioner, dehumidifier, and fan. It is a 6000 BTU model that means it can cool down the room instantly and effectively. If you are using it on fan mode, you can have a three-speed setting just like the window mentioned above.

MIDEA has considered the ease of use for the customers as it provides an LED display, and the unit itself is easy to install. Furthermore, in case of a power loss, the AC automatically restarts with the last set temperature setting. 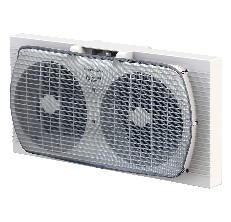 After all the three speeds setting window fans, here is a window fan by comfort zone that provides twin speeds setting; low and high. The twin window fan has auto-locking accordion expanders for a perfect fit. The thing that is most attractive about this fan is its versatile design. You can use the fan anywhere in your house as it has a 2 feet tabletop and a handle to carry it anywhere.

Just like the other window fans in our list, the comfort zone fan also has reversible functionality. However, unlike others, it has a manual reverse option. As discussed later as well, manual reverse comes in with a lot of complications. Although the functionality will be the same, i.e., draw in cold air or pump out hot air, the process of manually reversing the fan will be hectic. 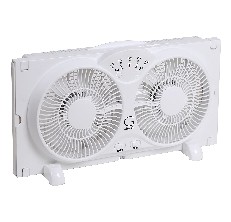 Here is another twin window fan that comes with three speeds setting for the perfect comfort level. It has a properly functioning thermostat that ranges from 60 to 80 degrees. To provide you with more ease of use, it also has LED lights so you can manage the temperature settings more visibly. The dual motors are made with durable copper so that you can use them conveniently in all weathers.

Yet again, it is also a reversible window fan that you can use in both dry and humid weather. The expandable side panels ensure a snug fit as you get an extra 6.5 inches on either side.

Before you hop on to buying a window fan, you must understand some of its key features.

Why Do You Need a Window Fan?

Let’s look beyond the scope of cooling down your room; why do you need a window fan other than that? A window fan is similar to an exhaust fan when it comes to expelling odours. Yes, you read it correctly; a window fan also helps remove the room’s odour and bring in the cold breeze. The exhaust fans mostly found in damp and humid areas pull out the odours and fill the area with fresh air. Similarly, a window fan can also remove the smoke smells, and pet stinks from your room.

The fresh and cold air provided by a window fan will not cost you a fortune. We do see our electricity meters go bonkers when we turn on the AC. However, this is not the case with a window fan.

Lastly, not only can you use a window fan in your rooms, but you can also cool down your kitchen, garage, laundry room, and workshops with it.

What Are the Different Types of Window Fans?

Those who have previously purchased a window fan will agree that there is not much difference in the looks of different types of window fans. Mostly, these fans have 1-3 blades, and people prefer to buy the one with the giant blades or the most number of fans. However, it is a mistake. No matter how tempting the large blades look, they will be of no use if the fan is underpowered. Thus, you will need to look at more features than just the appearance of blades. Primarily, there are two types of window fans:

If you were previously going for more blades, you would now realize why it’s wrong. Most of the whole house window fans have only one large blade. The fans who fall in this category are taller in size than the single or multiple rooms, as the former is more powerful. After all, you cannot expect a small box to cater to more than 2000 CFMs.

Depending on how you want to use a window fan, reversible fans can be of great help. Apart from the kitchen, you can also use these fans for the bathroom to remove odour or showers.

The price of a window fan varies a lot, but it is best if you stay away from cheap reversible fans. It can be a great headache because there is a significant flaw in the cheap quality fans. The cheap reversible fans need to be flipped manually around the window, and it is not as easy as it seems. While most of the units are light and easy to carry, some can be as heavy as 20 pounds or more. To further make the process complex, sometimes, there is a ridge on the outside. Thus, it becomes a strenuous job to flip the fan. Lastly, there might be controls on each side, and it again does not suit everyone.

Important Features of a Window Fan

The most crucial point to look for in a window fan is its thermostat. You can mostly find this feature in premium or mid-range fans. Quality is critical for this feature because a bit of difference in price range can reduce or increase the quality of a thermostat sharply. A poor quality thermostat is of no use as the sensor will barely work.

It is hard to find the CFM ratings on window fans, but speed and power are essential to check before buying. If you can’t find the CFM rating on the fan and not a single large blade, don’t expect much power. There are typically three standards of a widow fan; low, medium, and high. Mostly, it doesn’t matter if you are in exhaust mode or fan mode; you usually get the same speed.

If you live in a country where it is intensely humid and the foul weather concerns you, buy a window fan with the additional louvres feature. It helps seal the humidity, and you can close the window without removing the fan. Not only does this feature help you in coping with the humid environment, but it also overcomes security concerns.

A: Yes, window fans work perfectly to cool down the temperature of your room. You can also cut out the humidity, increase the airflow, and remove odor from your room with a window fan.

Q: Is it better to set your window fan to blow in or out?

A: It depends on the atmosphere of your room. Thus, a reversible fan is an ideal option to go with. So that you can set the blower in or out as per your need, if it is incredibly humid inside the room, it is better to pull out the hot air from the air. On the other hand, if the dry heat is raising the temperature of your room, you can blow in some cold air for circulation.

Q: Can you use a window fan without a window?

A: Windows are a means of natural ventilation and provide airflow. It will not be feasible to use a window fan without a window because the ventilation process is hindered. 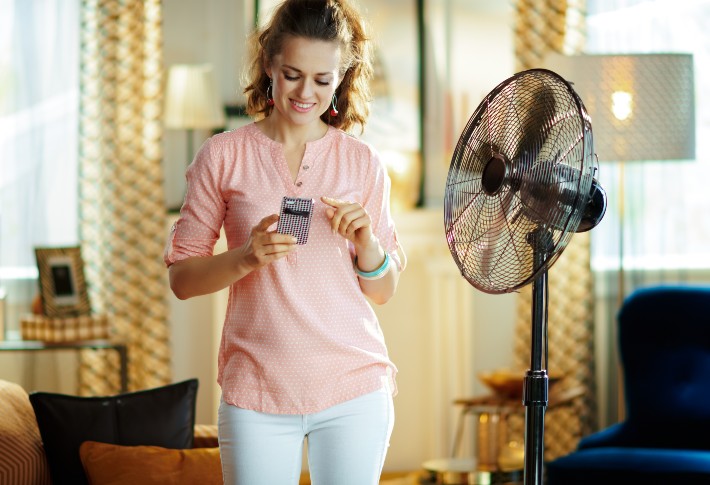 Upgrade Your Life With the Best Smart Fans 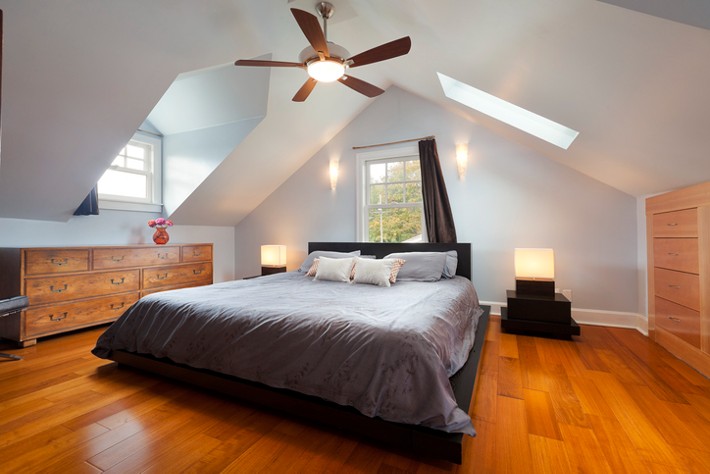 Keep Your Cool With the Best Bedroom Ceiling Fans of 2022 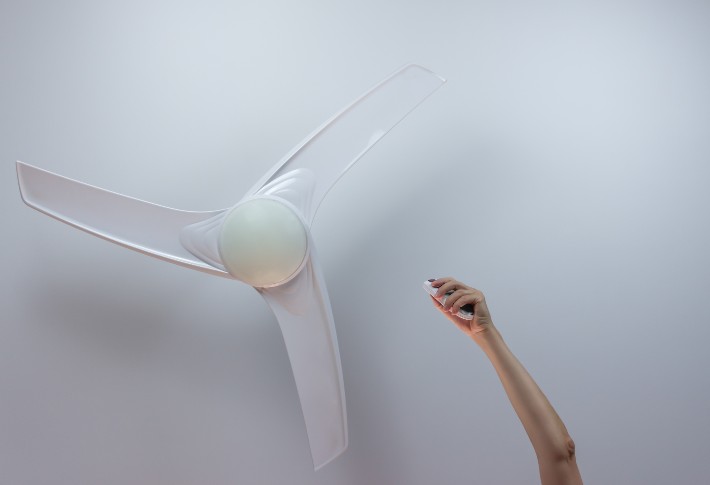