Even from a distance, the mass of flowerpots stacked on bleachers in front of a little Saltbox house got my attention. And I was clipping along at 45 mph, here in the Litchfield Hills of northwest Connecticut. Doing a double-take, I pulled off the road. It was a scene out of Currier & Ives, even more so inside the pottery studio. Hand-thrown pots were, of course, everywhere. But these weren’t the typical clay pots you bump into at the local garden center. This was terra cotta with strength, character, individuality.

Walk in and chances are good you’ll find artisan Guy Wolff at the wheel, his hands dancing over a lump of clay to make something that Jefferson might have recognized from Monticello. Or, if he’s taking a break, Guy will be picking away at his banjo. Either way, you know you’ve stepped back in time.

Guy Wolff works in red and white clays. On display in the studio are some one-of-a-kind, Asian-inspired pieces. He can tell you the history behind each and every flowerpot on the shelves. Although he occasionally throws a massive pot large enough to serve as a focal point in someone’s garden, the windowsill-size pots are his bread-and-butter. Clay always upstages plastic, but Guy is dedicated to keeping the art of clay alive. 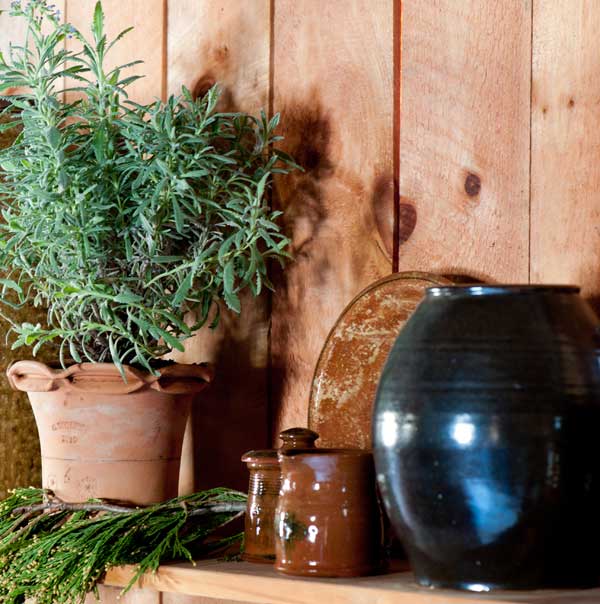 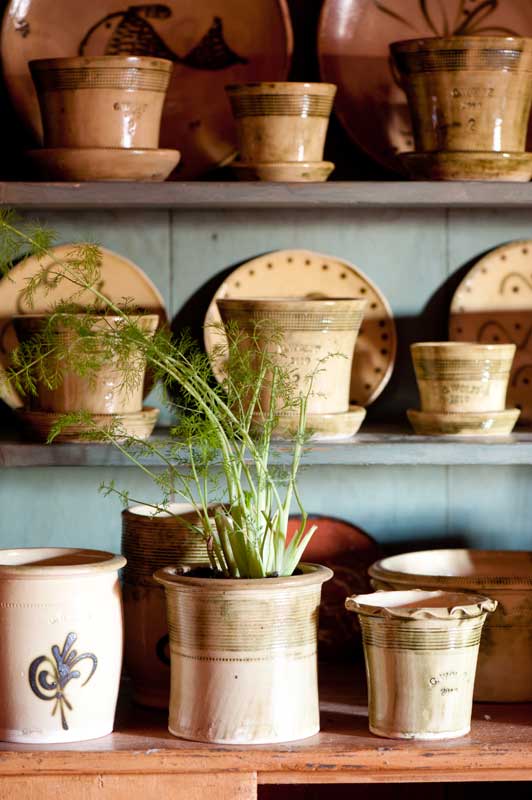 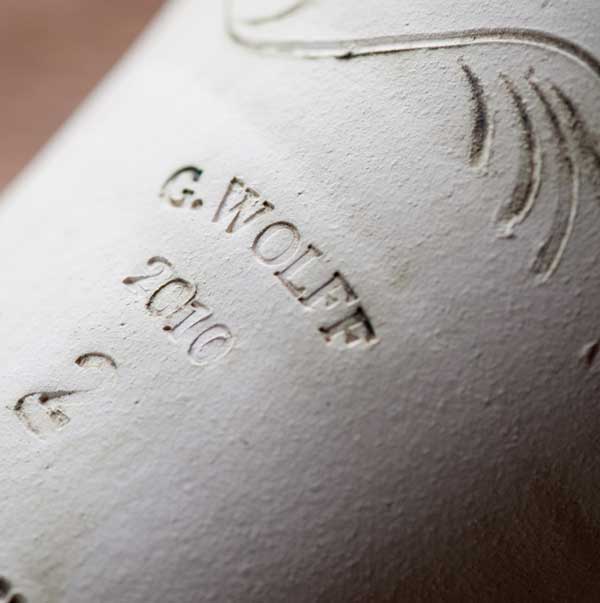 He’s been at it since 1971, making functional art. Guy is the son of Robert Jay Wolff, an abstract expressionist artist who was among the founders the Chicago Institute of Design, the American revival of the Bauhaus school. Though his craft may seem separate from his father’s occupations, Guy learned that art and beauty should be part of everyday life.

Artful pots are compatible with old-house gardens, but Guy will argue that his clay pots are better for the plants, too. The clays he uses are breathable to allow roots to thrive; pots are thick-walled to endure knocks. If you’ve wanted to grow house plants but weren’t sure about their suitability, Guy Wolff will tell you that it’s all in the presentation.

Guy Wolff says he’s spent his career looking backward. He meticulously researches pot styles, and to play the sleuth, he’s gained access to collections at historic houses. “I go to Mount Vernon and Monticello, and I look at shards,” he laughs. He also delves into the records of historical societies, peruses old advertising broadsheets, and studies paintings. A favorite is Rembrandt Peale’s famous 1801 portrait of his brother, Rubens Peale, holding a potted geranium; the image gave him a good lead for a pot design. Purchase a Guy Wolff pot, and you might have something inspired by one thrown in 1870 by Virginia potter Anthony Baecher. Or the handles may be similar to those turned out by Page & Company (1870–1930) of Peabody, Massachusetts.

Wolff’s techniques are also retrospective. The containers are made with time-tested combinations of clays, firing temperatures, and throwing methods. Wolff practices skills employed for generations—before machines demanded a particular clay, and mass production forced potteries to create products that stack efficiently in the kiln. His containers have the strong silhouettes, the wonderful imperfections of historic flowerpots. They are decorated with sgraffito, slip trailing, cross-hatching, and other ornamentation techniques.

Decorating the Garden with Antiques