Although it had promise, the property essentially was a blank slate—a garden designer’s dream. The Arts & Crafts cottage on the southern Maine coast was just what Thomas Lovejoy wanted as a new homebuyer in 1992, precisely because the surrounding landscape carried no baggage. “That first summer,” he recalls, “I was so excited about laying out the grounds.” The blank canvas was for him a gift.

In admiration of a house nearby, a wealthy Boston family hired the same builders to construct an identical vacation house on this one-acre property. This house and the original model have the same well-designed floor plan (which provides a maid’s room and butler’s pantry), and even the same wide Dutch door. Excellent craftsmanship and original details are evident throughout the interior, though that savvy didn’t extend to the landscape design. When Lovejoy bought the house, the property had little more than a rhododendron, an ornamental cherry, climbing euonymus, and mature scrub pines—which lend character and underline connection with the surrounding coastal landscape.

Some things needed immediate remedy. Most notably, the driveway ran alongside the house, delivering cars to a very visible parking area. “The screened porches featured a perfect view of the cars,” Lovejoy says. Some people might not find that offensive, but Lovejoy wanted to do better. He built a fence to contain parking and keep cars from marring the view. That fence invited a few courageous design moves. Pickets now shoulder climbing clematis and roses, the gateposts are topped with finials, and two massive, clipped spiral topiaries are sentinels wading in the perennial bed. Broad gestures like these repeat throughout.

Before, the house had been painted solid battleship grey. Lovejoy not only found the color “tedious,” but he also wanted more definition to accents its design features. “None of the details stood out,” he says; the trim was virtually invisible. On a trip, Lovejoy saw a cottage painted the nature-green color he’d been dreaming about, and he matched it, choosing a soft yellow for trim, all as a fitting backdrop for the garden he was planning.

Lovejoy began with the garden that hugs the foundation of the house. Rather than using more typical straight lines, he went for the rhythm of curved beds with an undulating gravel path alongside. Lovejoy distills his style in one unapologetic word: “Opulent—because I like that sort of look.” The garden is dense and dramatic, yet not self-conscious, featuring soothing colors that work with the house.

“When you have a cottage garden,” he says, “you can get away with just about anything.” Nevertheless, he has limited his palette to pastels with a few pops of color from exotics, repeating colors and plants to create rhythm and movement. The result is similar to a flower arrangement—but without the vase.

The curvaceous path leads to a tool shed, a design chapter that began with an old Lord & Burnham greenhouse Lovejoy had acquired. It needed a building attached. The new shed is hardly nondescript: Lovejoy designed it as a reduced version of the house. Then came a pergola and lean-to for storing wood, followed by a gravel garden, where potted tropical plants live in summer (over-wintering in greenhouse and shed). Shaded by the pergola, the gravel garden is furnished for lounging and entertaining.

The property slopes to a lower area now planted as a circular garden, inspired by a favorite Olmsted landscape. Surrounded by primarily white flowering shrubs and espaliered apple trees, this garden encourages moss rather than lawn grass. “When I come home from work,” Lovejoy says, “I take off my shoes and socks and walk on it, it’s soothing.” An antique sundial sits in the center.

Is the garden high maintenance? Lovejoy’s response as a devoted gardener is that he finds upkeep a pleasure rather than a chore. “I love moonlighting in my own yard.” 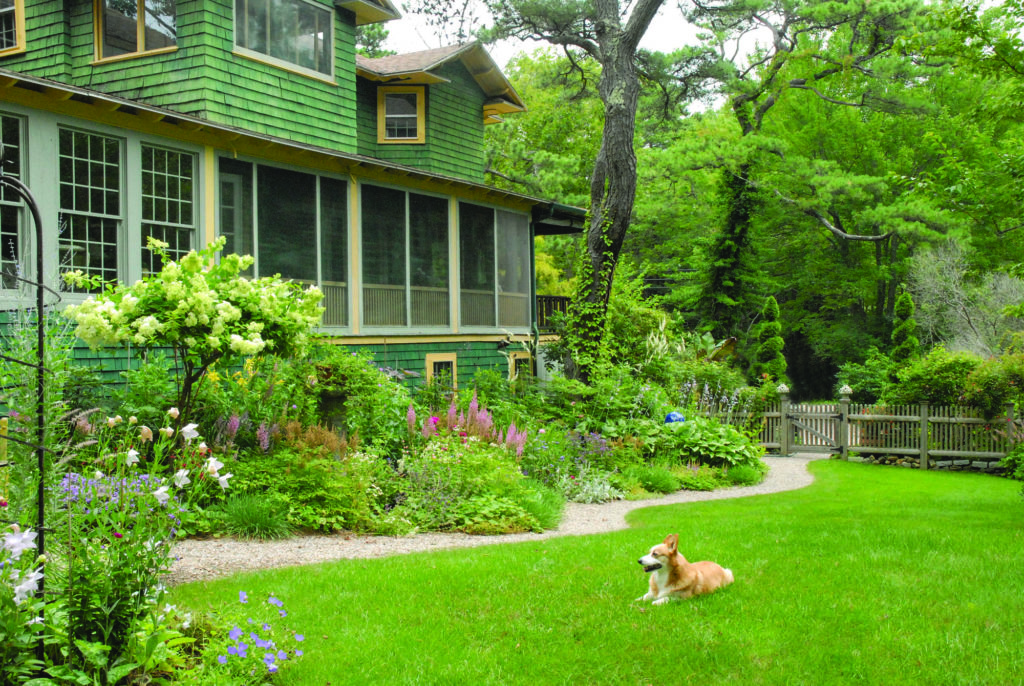 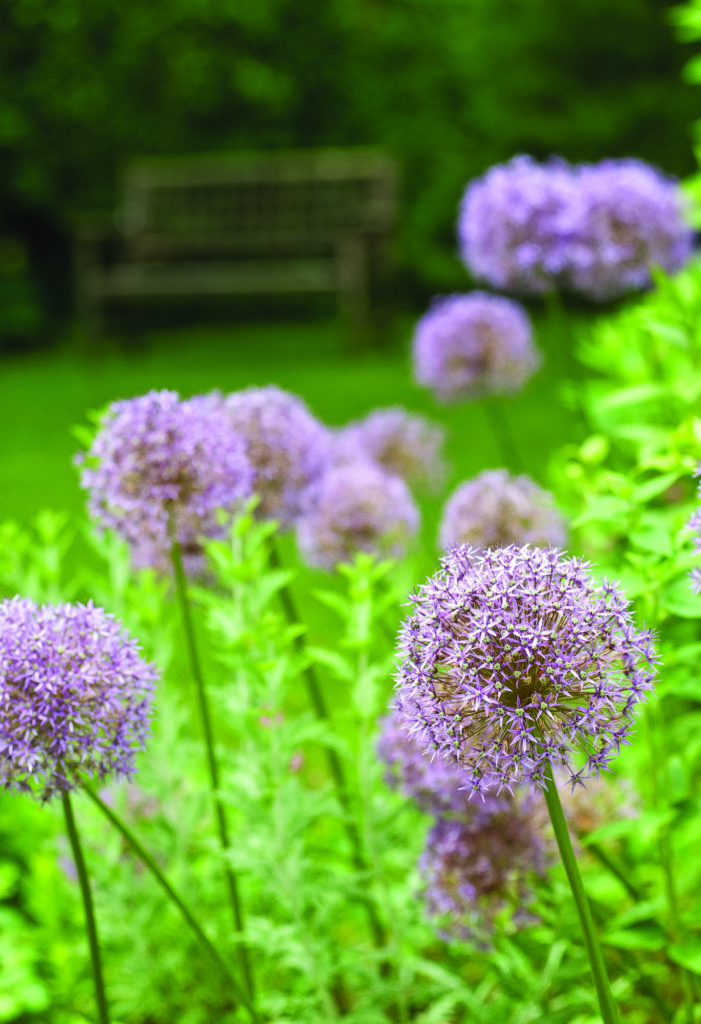 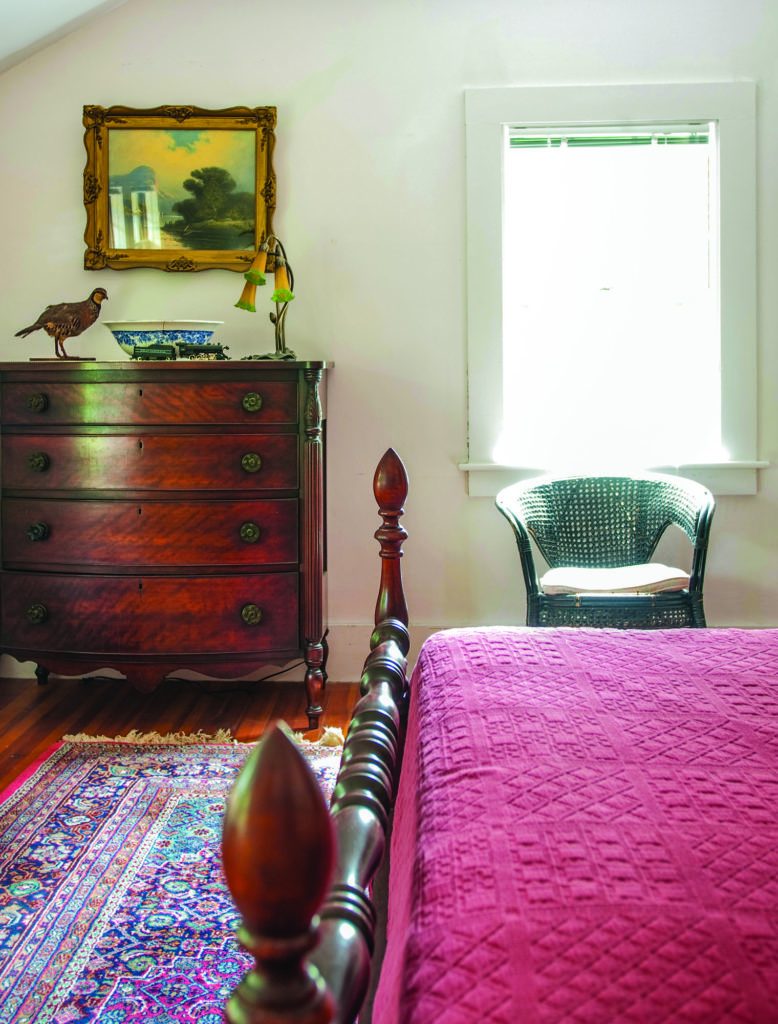 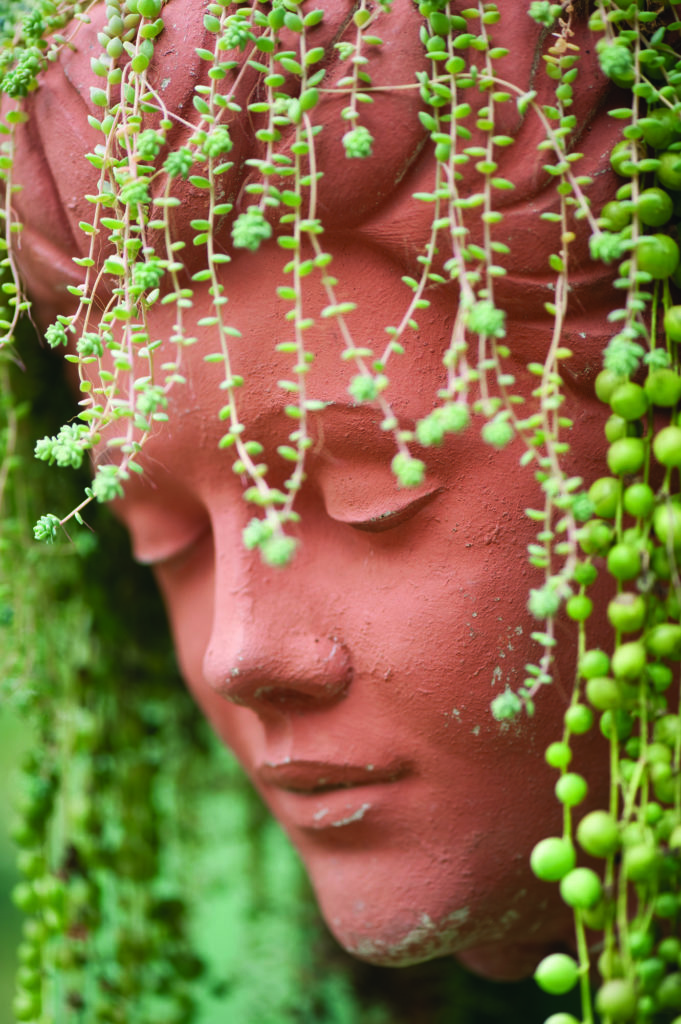 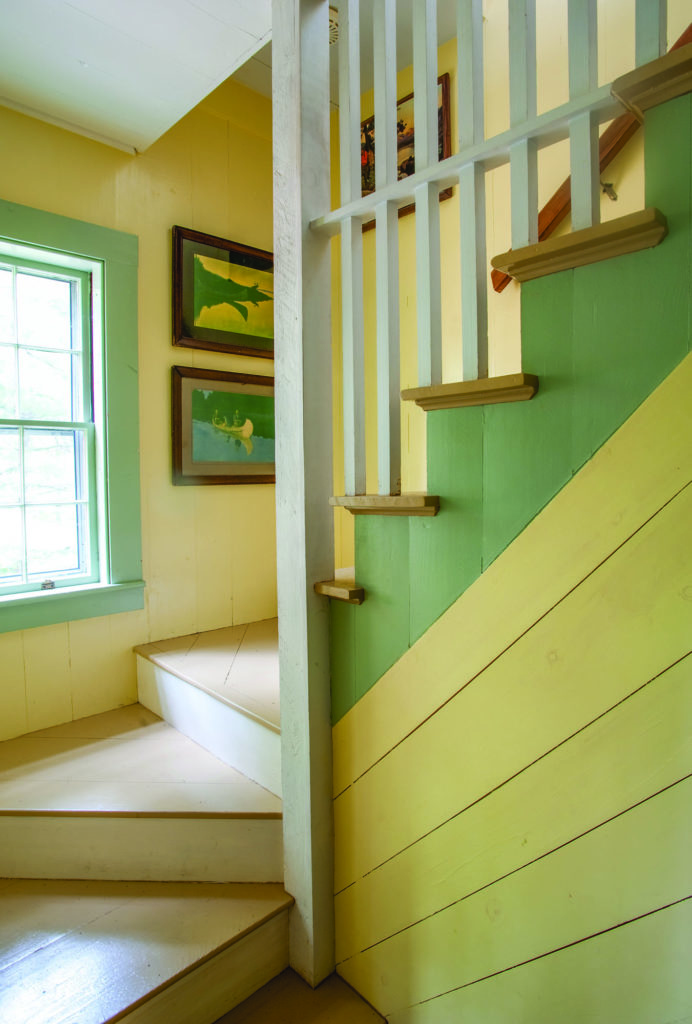 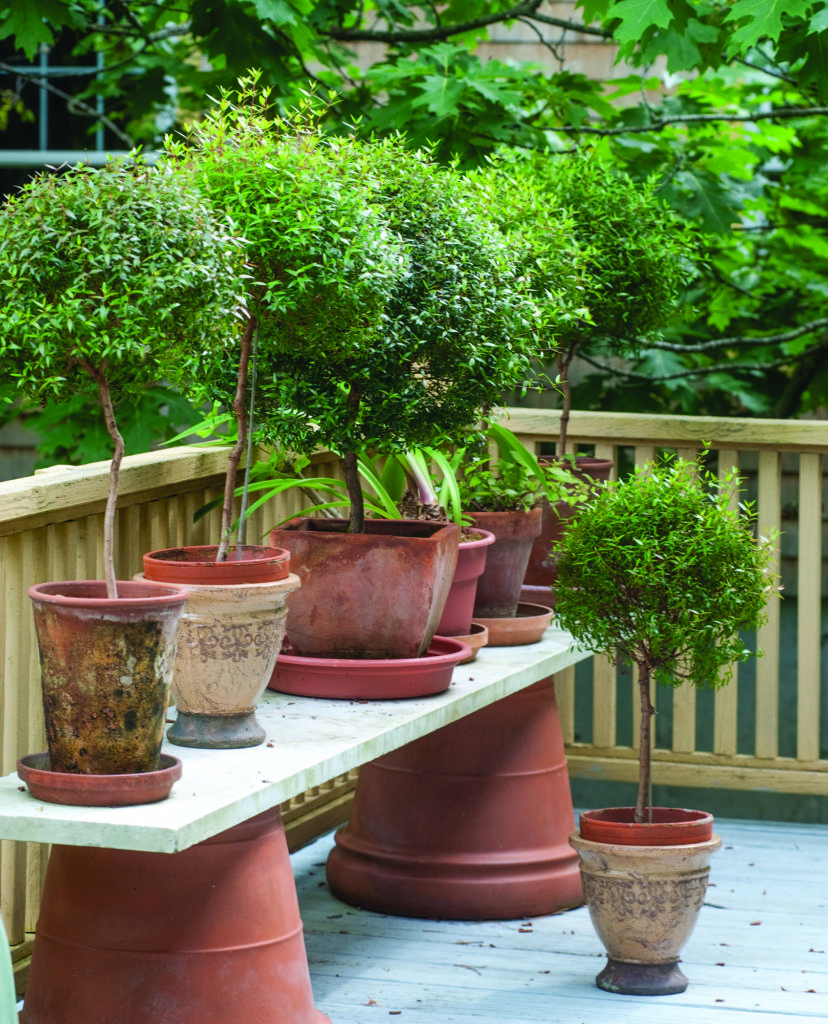 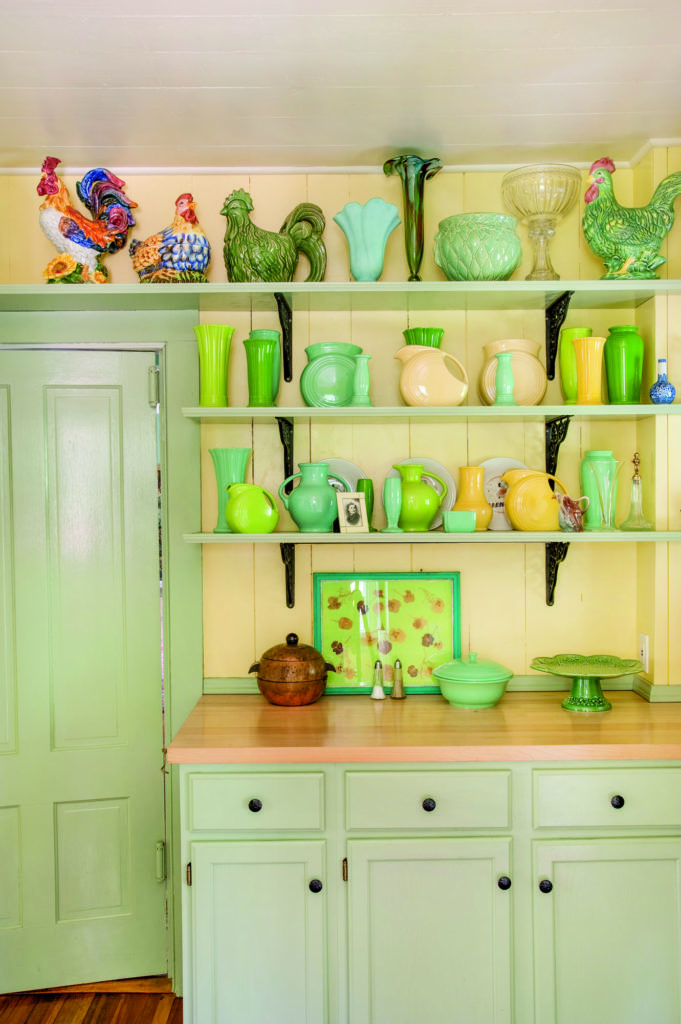 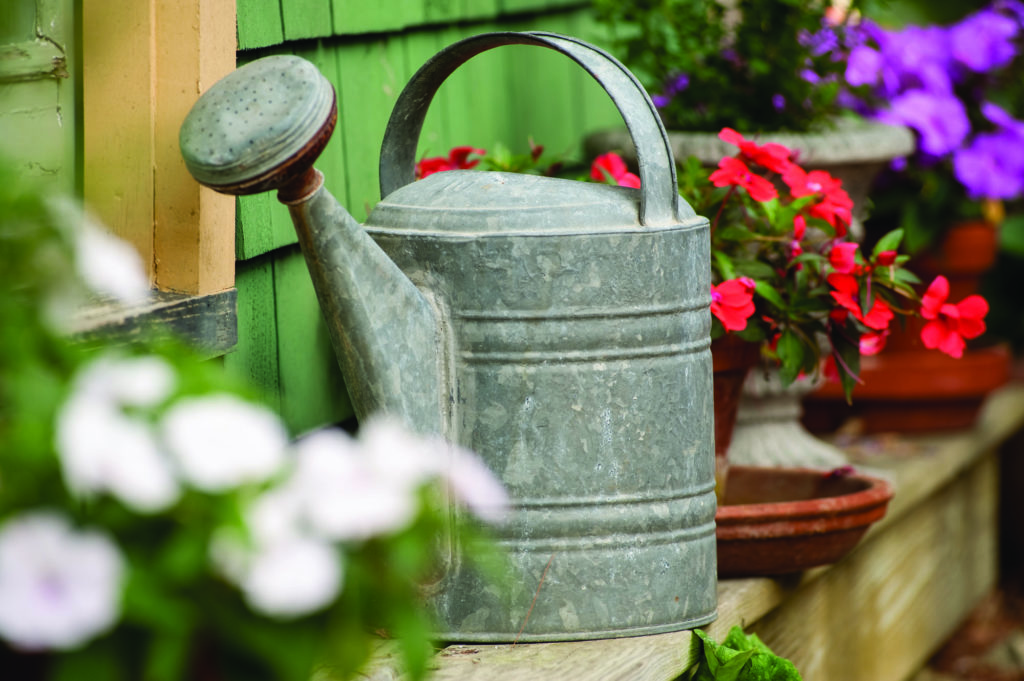 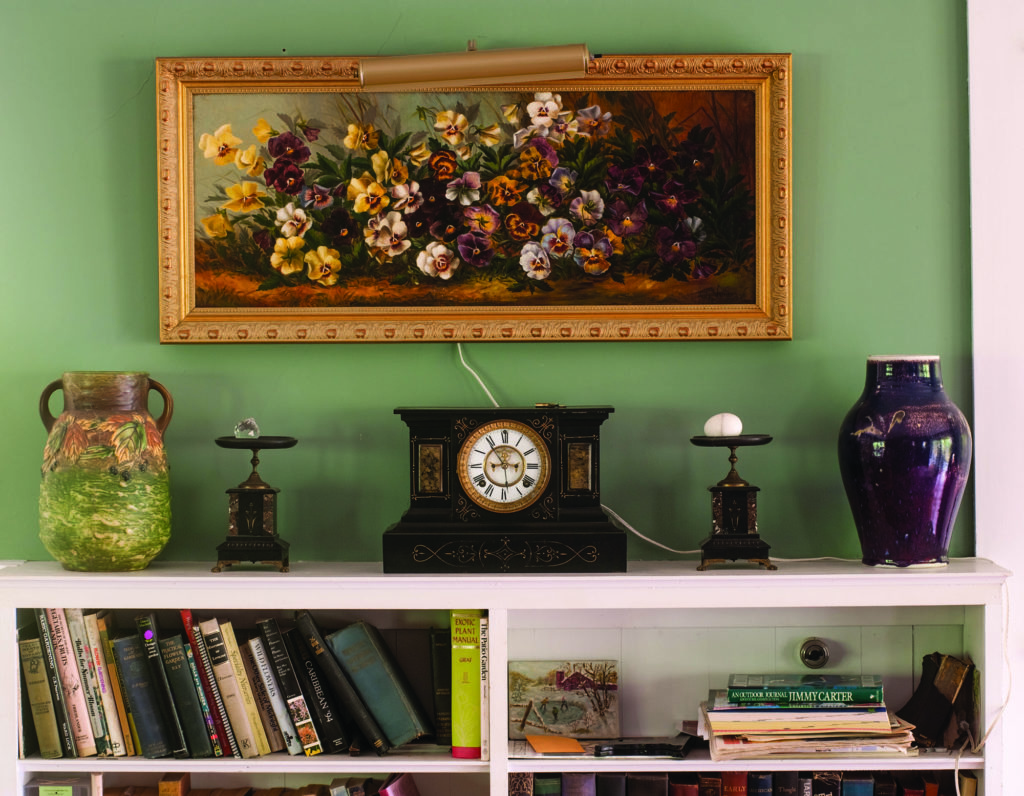 Throughout the growing season, the garden is a vivacious blend of perennial lilies, astilbe, pulmonaria, lamb’s ears, iris, lady’s mantle, and salvias. Lovejoy leaves space for favorite annuals that include the castor bean, zinnias, dinner-plate dahlias, and ageratum. Near the house, a white hydrangea adds some height; lilies, goat’s beard (aruncus), cimicifuga, and hollyhocks stretch to the windows. Out front, the screened porch is cushioned in a more restful bed planted with shade-tolerant perennials with an emphasis on hostas.