New York City has hot, humid summers, which were all the more insufferable in the days of corsets and before air-conditioning. People of means escaped to summer homes, many of them built in the mountains of New York state. The first colony of summer homes in the Catskills was at Onteora, organized by Tiffany collaborator Candace Wheeler in 1887. She brought along her friends Samuel Clemens (Mark Twain), Mary Maples Dodge, and Elizabeth Custer, the widow of General Custer.

The rustic homes were complemented by native wildflowers and species plantings. Some gardens were captured in hand-tinted, glass-plate slides—used for “magic lantern” shows—by the famous photographer Edward Van Altena at the turn of the century.

Today, historian and Onteora resident Jane Curley has organized a collection of the historic images. I toured the area with her to see how those gardens had fared in the century since the images were recorded. Some are recognizable but less lush, others flourishing and still lovingly maintained. Some, reclaimed by forest bracken, are long forgotten.

Convery Farmhouse is the oldest building at Onteora. The current owner added a driveway and low, dry-laid stone walls. The old house has settled gracefully as greenery grows taller each season. Summer brings surprises, such as “volunteer” foxglove and lupine that seed themselves in this hospitable environment. Bee balm, Russian sage, black-eyed Susans, and blue globe thistles flourish here in August, and blueberry bushes provide a rich crop for pie-making. 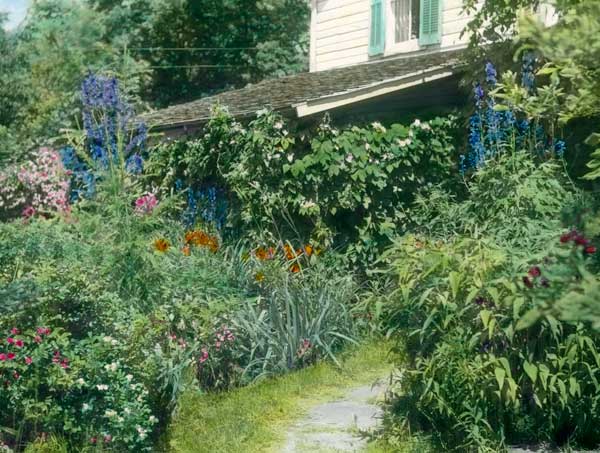 Elizabeth L. Roberts Studio was designed by architect George Reid ca. 1902 for this well-known painter of the period. The rustic building was once surrounded by lush shade gardens, and winding paths led into the surrounding woodland. Nature has reclaimed the gardens, but the studio stands, silent in the midst of ferns and bramble. 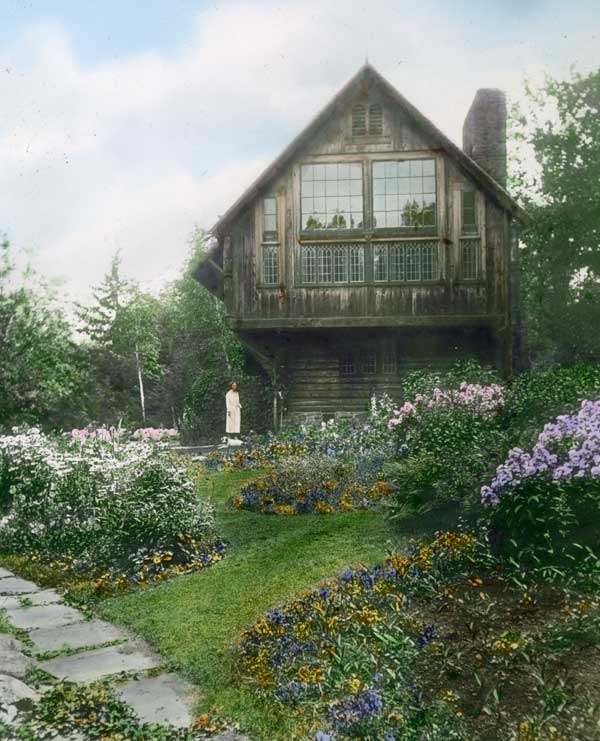 Wildmuir has spectacular gardens to this day, the accomplished work of Harold Caparn, who designed much of the Brooklyn Botanic Gardens. Mrs. Ben Ali Haggin, who owned the cottage in the 1920s, hired Caparn to renovate the property. He added the walled garden.Today’s owners have restored the lawns and their specimen rhododendrons, laurels, and spruce and fir trees. They also recast the upper part of the walled garden as an outdoor dining room.