Before they bought this house, in the late 1970s, Carol and David Delaney were not gardeners. Neither was their new yard much of an inspiration. “It was nothing,” Carol says. “Just a house with a small yard around it . . . a lawn, a few bushes, that was it.”

The pretty Victorian is a two-story Second Empire cottage with a bell-shaped roof and a delightful wraparound porch with fancy sawn balusters. It was built around 1890 just a stone’s throw from the sea in Rockport, Massachusetts, the Cape Ann town once famous for its granite quarries. The lot includes a barn that predates the house; local lore has it that lumber once was milled here for the neighborhood. The rectangular lot, which also has two sheds, is sandwiched between a narrow village street and a small lane. The Delaneys are the third owners of the house, which had been slightly enlarged with a kitchen addition sometime before Carol and David moved here. 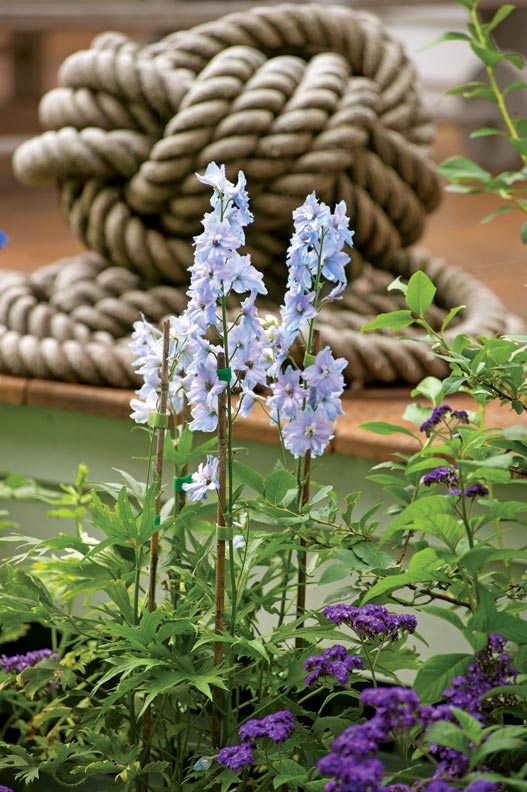 It was sailing that brought them to this ocean town on Boston’s North Shore. “We moved from Cambridge so that we would be able to sail our boat on summer evenings after work, instead of just on the weekends,” David explains. The two were attracted to Rockport’s village center, with its collection of tightly clustered 18th- and 19th-century frame houses. They bought this charmer on impulse, and for years they tended to their children and their careers. Increasingly at home in the quiet neighborhood, the couple began to see possibilities for their smallish lot.

First, they added a large, curving deck overlooking the backyard and accessible from the kitchen. So “one of our first projects was to level the backyard,” David says. “The work was all new to us—as was the discovery of vast numbers of rocks unearthed as we dug.”

In the time-honored tradition of New England farmers and gardeners, David used the rocks to build stone walls, which define the various garden areas. “It was absolutely therapeutic,” says the retired hydrologist. “First, I spread out all the rocks; then, it was like a puzzle.”

“I’ve always loved pictures of Cotswold cottage gardens, which conjure up the perfect place to sit, relax, and be with nature,” Carol says. As their ambitions became serious, the couple consulted local master gardener Mary Mintz. She told them the first order of business was to identify their yard’s various microclimates. “Before Mary, we didn’t even know such a thing existed!” they laugh. Carol says that Mary also came back to guide them in the second year.

Diverse gardens now surround the house with lively color and texture, in the cottage garden tradition. In spring, summer, and fall, passersby comment on the flowering profusion. When the property was featured on a Rockport garden tour in 2012, Carol and David received more than their share of gushing compliments. Garden tourists were especially taken by David’s use of local materials, including stones, rope, and fishing nets, to create trellises, edging, and plant supports.

“David and I love working on these projects together,” Carol says. Her husband agrees: “It’s been a wonderful, ongoing project. Carol does the gardening, while I dig the holes.” His wife laughs and explains the importance of putting the right plant in the right place. Despite Mary’s excellent advice, getting the plants right “is more like a science experiment,” Carol says. The Delaneys say that a dedication to chemical-free cultivation has guided their choices.

For example, Carol says, “powdery mildew can be a real problem with our proximity to the water—so we grow indestructible, old-fashioned plants like black-eyed Susans and daisies. I’ve also learned that garden hygiene is important. To successfully grow delphiniums, which I love, I make sure to pick up any blackened stuff and keep it away from the soil.”

Several years ago David installed a series of granite posts along the edge of the street. “They define each entrance into the garden,” he says. “It’s nice to use Rockport granite.” As decorative design elements find their way into the garden, the couple takes care to assure their subtlety and appropriateness. “At this point, it’s nice to add pieces that add interest and become a part of the design,” says Carol. “But it’s so easily overdone; it’s a balancing act.”

In the mature garden, the Delaneys dig up and divide perennials, donating many to the Rockport Garden Club’s annual plant sale. Both of them profess to love the hard work. “Maybe down the road we’ll want less labor-intensive plants,” Carol says. “But this work is so satisfying. I call the garden ‘my happy place’.”