On a thousand acres of uncommonly beautiful but topographically challenging Georgia countryside, a group of far-sighted and racially diverse entrepreneurs built, in the mid-1950s, one of our most prestigious African-American communities. More than 50 small subdivisions were developed over 30 years. The community’s 1,750 buildings include well-groomed residences, many in the hands of the original owners. Nearly every mid-century house style can be found here, especially postwar ranches and split-levels. Collier Heights retains its unique place in the history of suburbia and in the hearts of its residents. 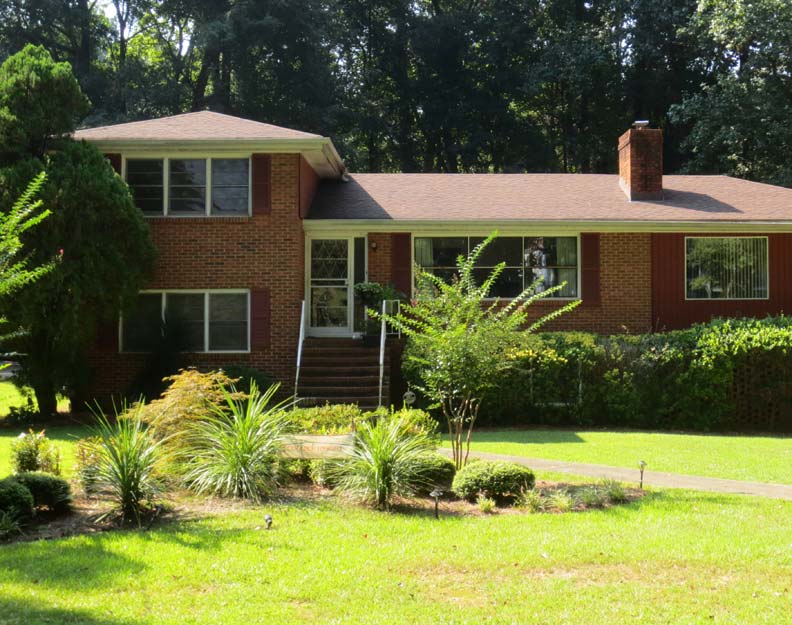 Located in an early Collier Heights neighborhood, Juanita and Harold Morton’s house is a hip-roofed, red brick split-level with a large picture window. The compatible extension is also in red brick, the most common building material here.  ">A Chinese-style rancher? Yep! It was designed by the prominent African-American architect J.W. Robinson. The roof and clerestory with upturned corners suggest a pagoda. The “moon door” is enriched by an extraordinary example of the community’s signature grille gates. ">A good example of a later ranch, this symmetrical house is distinguished by a classical pedimented entry porch and floor-length windows. It marks a return to more traditional styles, but within the framework of the postwar ranch.  ">Only a handful of circular houses were ever built, though the idea dates to the mid-19th century, and Frank Lloyd Wright dabbled in the form. This one was designed by Atlanta architect J.W. Robinson.  ">The postwar “American Small House” (or Minimal Traditional, as it is also known) is probably the most common home of the 1940s and ’50s. A simplified Cape Cod, it’s just big enough to meet Federal Housing Administration standards. Such homes could be built quickly and cheaply to satisfy unprecedented demand fueled by returning war veterans and their families.  ">Typical of the area in the 1950s is this “American Small House,” a relatively new style designation. The pyramidal roof and picture window are common in the postwar era. Narrow, non-functional shutters are ubiquitous decorative features of the period. ">
Gallery6 Images

“Preservation united the community. Someone honks and you wave. It’s just a connection we all have. We try our best to look after each other . . . and we really appreciate our elders.” -Juanita and Harold Morton

Along with the Collier Heights Community Association and Georgia State students, the Mortons were a driving force behind the decade-long effort to gain local and National Register recognition.

James C. Massey and Shirley Maxwell are the authors of House Styles in America : The Old-House Journal Guide to the Architecture of American Homes, Arts & Crafts and Gothic Revival.