As soon as Janice Parker stepped into the Ridgefield, Connecticut, garden, she felt herself instantly transported to the past.

The Roaring Twenties relics—the dark-marble dolphin fountain, the Classical pavilion and the colossal circular bench—planted there by Ellen Biddle Shipman, one of America’s first female landscape architects, caught her eye and stole her heart.

Parker, a landscape architect based in Greenwich, Connecticut, felt an immediate connection not only to the serene green space but also to Shipman, who was one of the more prominent players in the early 20th century, when landscape architecture was a fledgling field.

“That was the hook for me,” she says, adding that it was a once-in-a-lifetime opportunity to preserve such a significant garden.

Between 1914 and 1946, Shipman designed over 650 gardens, but this one, which Parker christened Historical Preservation, is believed to be her only one in Ridgefield.

Over the decades, the four-acre garden that dates to 1920 had been badly carved up into two sections when the property was subdivided.

When the current owners built a new three-story, Shingle-style house, designed by architect Sean O’Kane Jr., they left the garden alone until they got the chance to buy the adjoining lot below, which contained a recently built smaller house.

They wanted to keep the second house as a guesthouse, but they also were keen on preserving Shipman’s garden, which they had researched, so they commissioned Parker to create a cohesive plan that seamlessly would tie the two spaces together.

“The second house was almost on top of the dolphin fountain,” Parker says. “We discussed moving the fountain, but it was so old that that wasn’t feasible, so we decided to work the garden around the house and the other Shipman features.”

Parker created a romantic and classic garden that accentuates the signature timepieces and yet fuses them with contemporary design.

“I was invited to explore the meaning, mystery, drama and excitement of the location,” she says. “I asked myself, What kind of garden would Shipman have designed if she were working today? What would she have done if she had had access to all the contemporary plants and even elements like outdoor lighting?”

The answer she came up with features bold sculptural plantings of 22-foot-high red fastigiate beeches as well as smaller columnar hornbeams, flowering magnolias, crabapples and dogwoods that play off modern under plantings of chartreuse Hakonechloa grass and ‘Limelight’ hydrangeas.

“Shipman would have put in lots of purples and whites, so we did, too,” Parker says. “And she would have used massed perennial borders of ferns, hollyhocks, delphiniums, and foxgloves for color. We couldn’t have too many traditional perennials because of the maintenance. And the deer would eat them, so we used more deer-resistant flowering shrubs and roses that keep the garden in bloom all summer long.”

Under Parker’s plan, Shipman’s signature elements become focal points, and paths and steps seamlessly link the upper and lower portions of the property.

The dolphin fountain and its surrounding balustrades, the pavilion and the circular bench were restored.

“It was quite an undertaking to get the fountain to work again,” she says. “The builder had to restore a tiny crawl space and then work in it to do the job.”

The bench, which reminds Parker of one at the historic Washington, D.C., estate Dumbarton Oaks, was accented with a necklace of hornbeams, under-planted with lacelike Deutzia gracilis ‘Chardonnay Pearls’, to screen it from a neighboring house.

The concrete pavers in front of it were replaced with a pebble mosaic compass rose bordered by bluestone.

Some of Parker’s stunning solutions were rooted in practicality. The swimming pool on the upper property, for instance, is ringed by a fence hidden by a double border of high arborvitae.

“It keeps the deer out,” she says.

Speaking of deer, there is a limestone stag wearing a crown of iron horns that guards one end of the circular bench. Lying regally upon its pedestal, it surveys its surroundings, keeping a watchful eye on all the two- and four-legged creatures who enter.

“The sculpture, which is new, is in homage to the deer who keep coming on the property,” Parker says. “His horns are metal because he’s a stallion.”

Every time she visits, it reminds her of the legacy of Shipman and the role she has had in keeping it alive.

One of Parker’s favorite spots is the columned pavilion, whose lawn panel is a splendid place to reflect on the surrounding beauty of the past as well as the present.

“When I stand there, the red fastigiate beeches, whose leaves turn ruby red in the spring, make me feel like Alice in Wonderland,” she says. “It’s magical.” 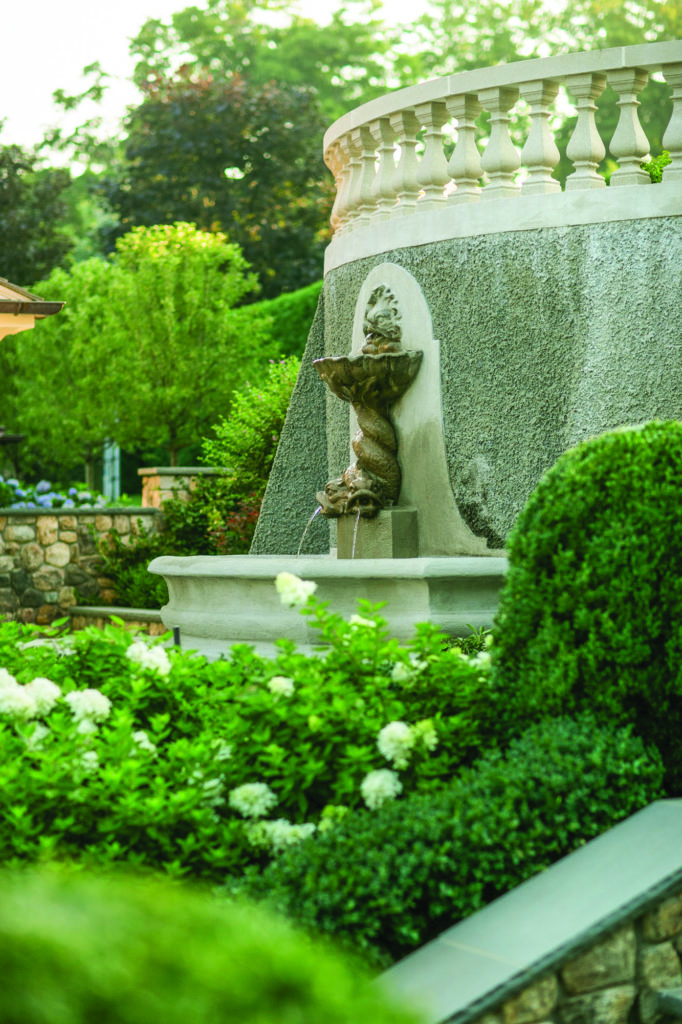 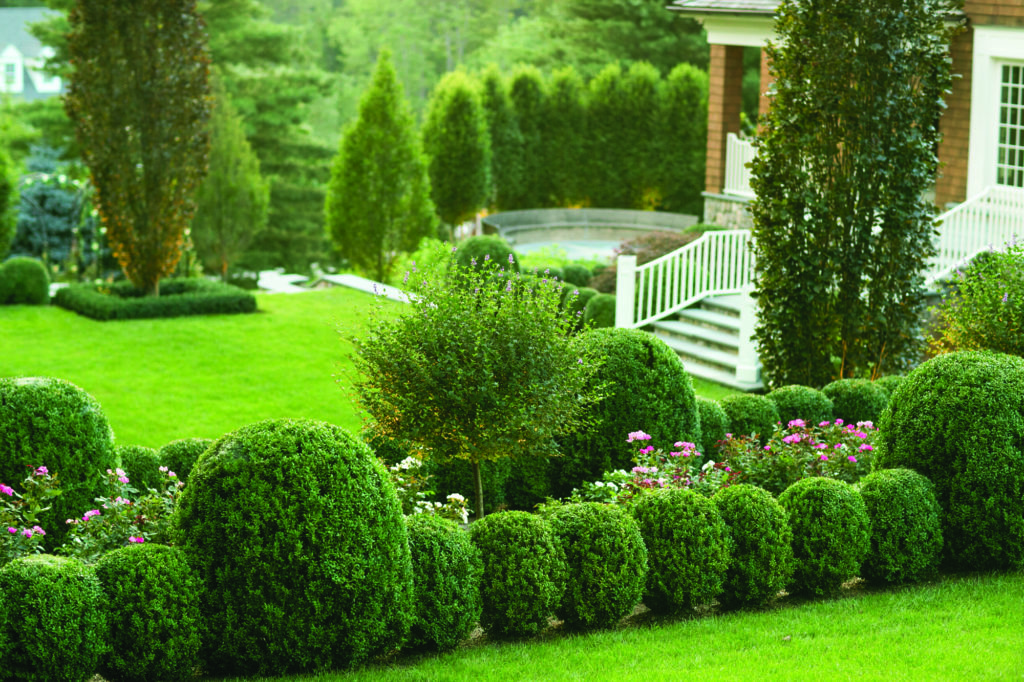 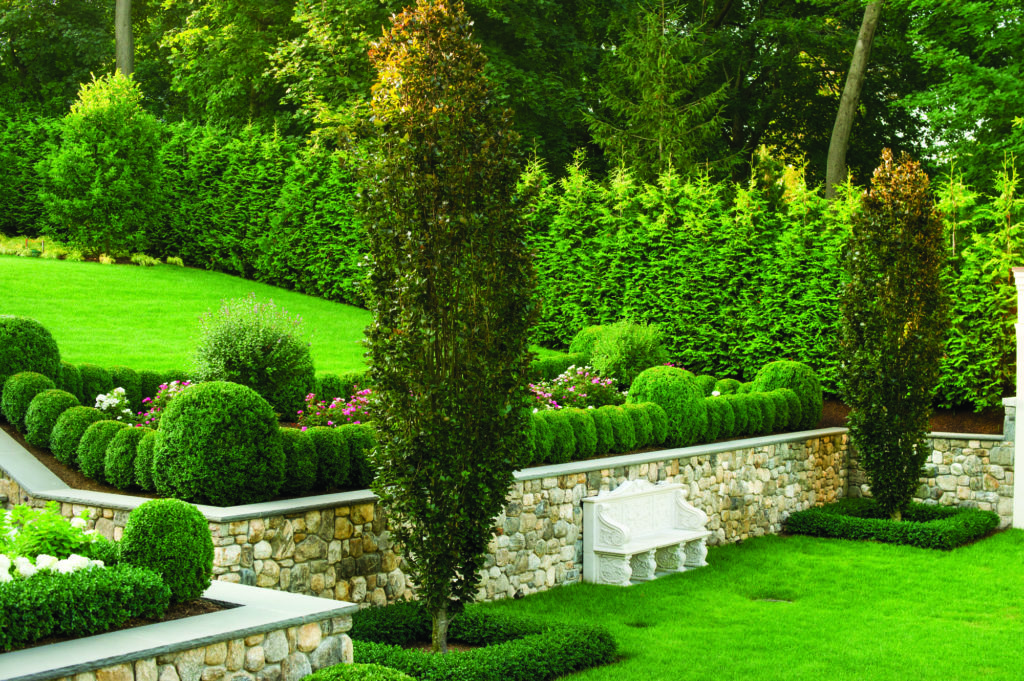 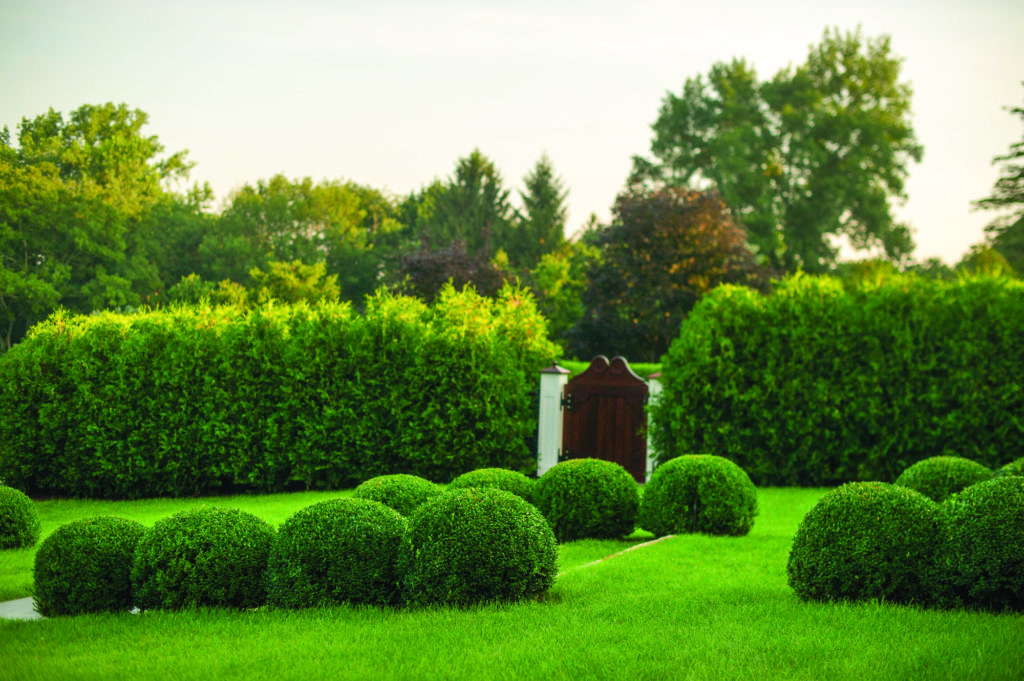 To create the timeless design of the Historical Preservation garden, Janice Parker grafted classical and contemporary patterns and plantings. Here are some of the things she did to nudge and fudge the timeline.

> Restored and played up the original Ellen Biddle Shipman features, including the marble dolphin fountain and two-room columned pavilion, and wrapped the new garden rooms around them.

> Repeated elements in key spots. The original circular bench, for example, features bluestone in its mosaic paving, as do the treads of the new staircases and the British flag-inspired, grass-jointed path that connects the bench to the rest of the garden.

> Added new elements, including a fountain and a stag sculpture that bridge the design gap between past and present.