When landscape designer Scott Shrader saw his friend’s just-purchased 1930s home, located in the coveted flats of Santa Monica, California, the juxtaposition of its dilapidated condition and pristine lines was dizzying.

“The property was in terrible shape,” says Shrader, the principal of Shrader Design in West Hollywood. “This house really needed some love, especially the garden.” The house, with a traditional design in the spirit of the 20th-century architect Paul Revere Williams, still had beautiful bones beneath its distressed exterior. But the garden was a complete mess. “The only thing we kept was the outline of the pool,” Shrader says. “Everything else was removed, and we started from scratch.”

Homeowner Alex Vorbeck, a friend of Shrader’s, whom he describes as a “serial house remodeler,” have worked together many times since, but this was their first team effort. They happily jumped into the project, with Vorbeck restyling the house and Shrader creating several gardens that transform the look and ambience of the entire property.

First came a hurdle: neighborhood restrictions. The style of plantings was mandated for the front yard, a small area with a wall and a sidewalk near the street. Hedges that block the view of the house from the sidewalk are forbidden. But the rules became an opportunity. “The restrictions inspired us to think differently about how to establish a sense of privacy within a unified vision for the entire landscape,” Shrader says. The key, he saw, was choosing very purposeful and specific materials; for this project, the hardscape would guide the vision.

“Every design has to find its own starting point,” says Shrader, who is the author of The Art of Outdoor Living: Gardens for Entertaining Family and Friends (Rizzoli). When he found a reclaimed wall of thin, taupe-gray bricks from China, Shrader knew he had his starting point. He had the bricks—in many shades of gray—cut in half; they eventually were laid in a herringbone pattern throughout the grounds.

The wall inspired not only the gardens’ color palette of coral, gray, green, and white, but also a design scheme that Shrader calls “carpets in the gardens.” A pathway of brickwork starts in front of the house, leading to four luscious backyard gardens defined by brickwork pads. 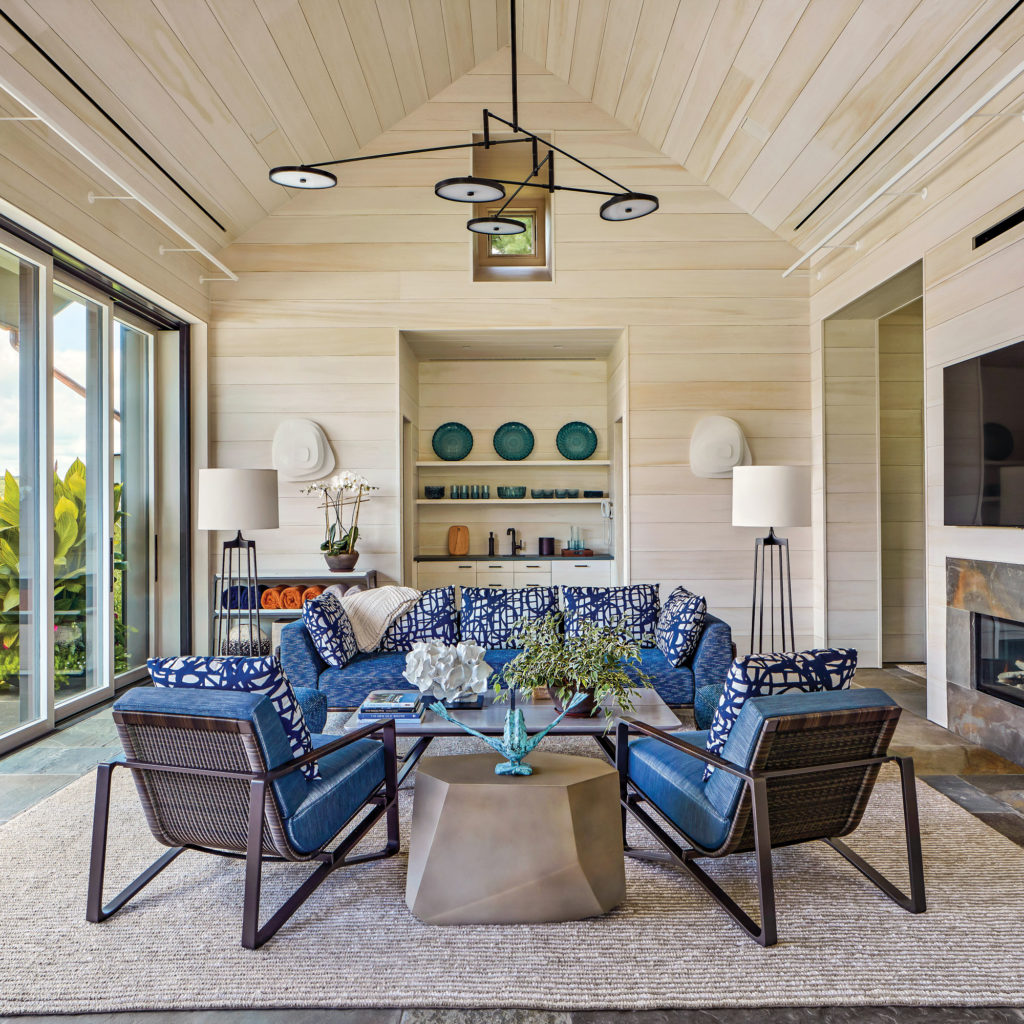 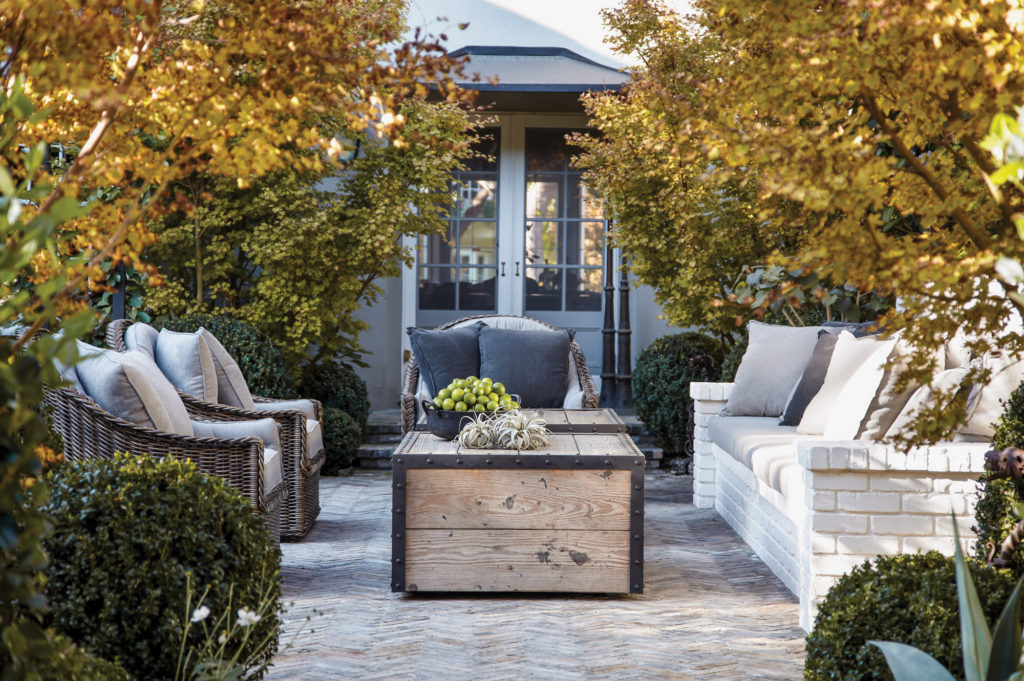 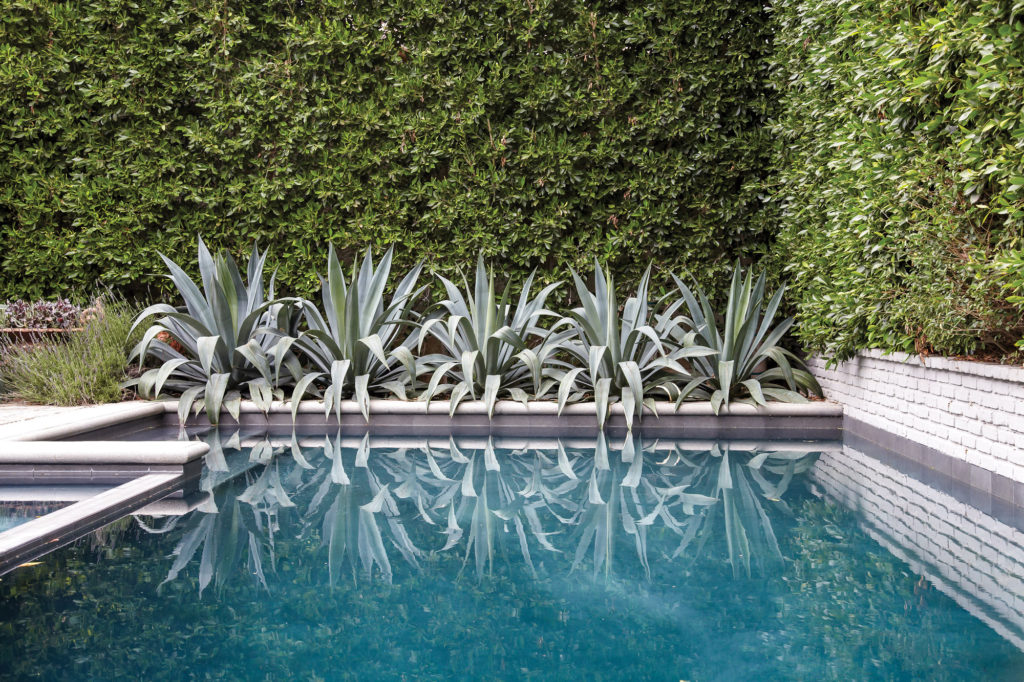 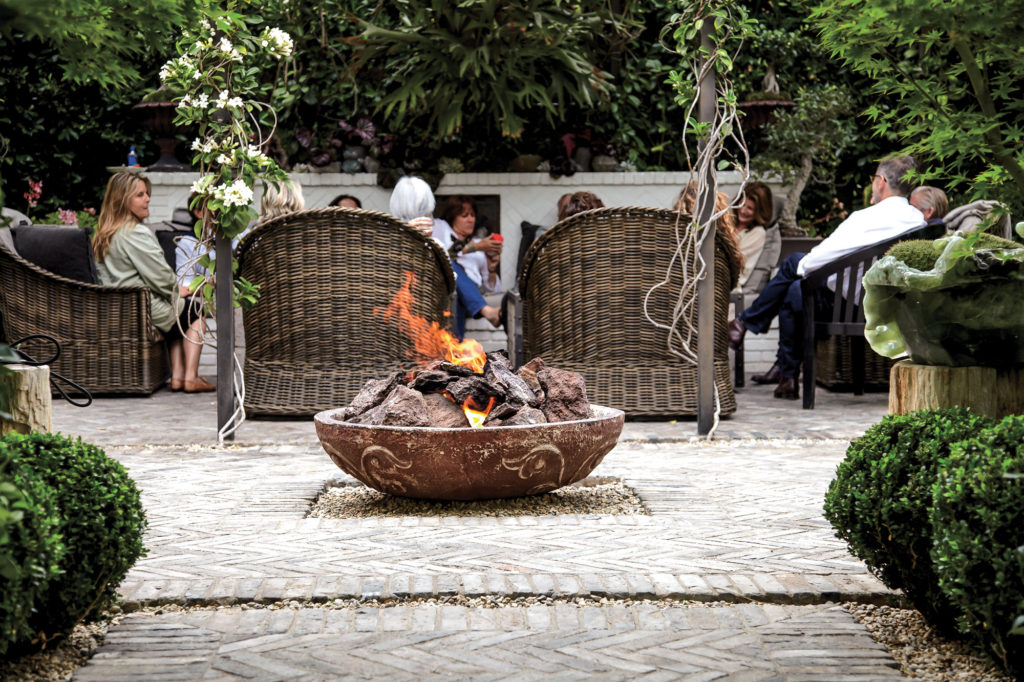 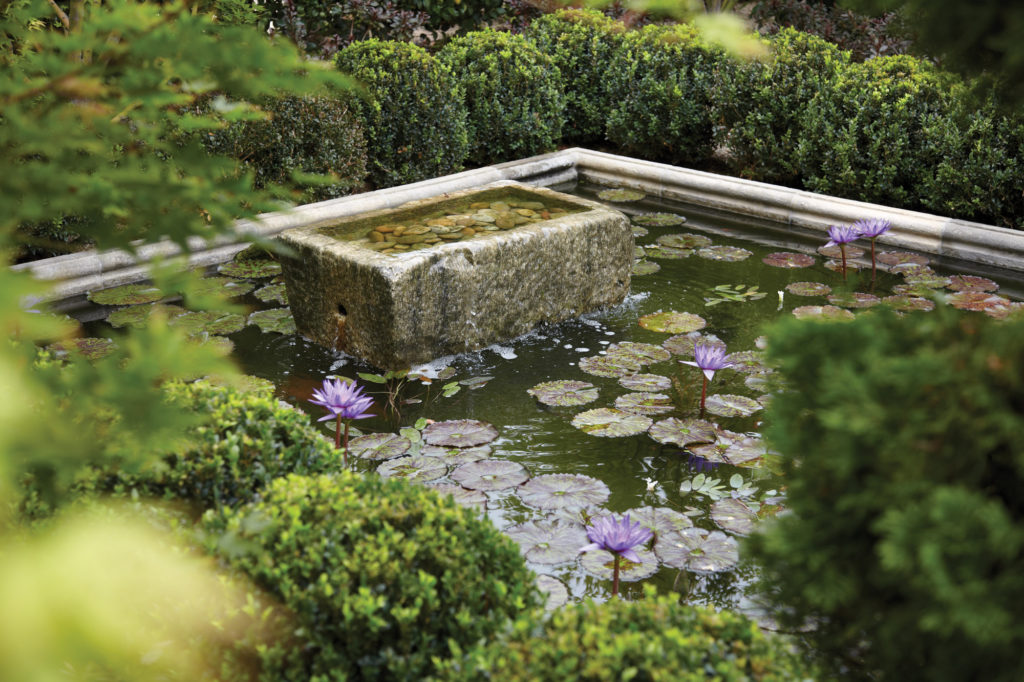 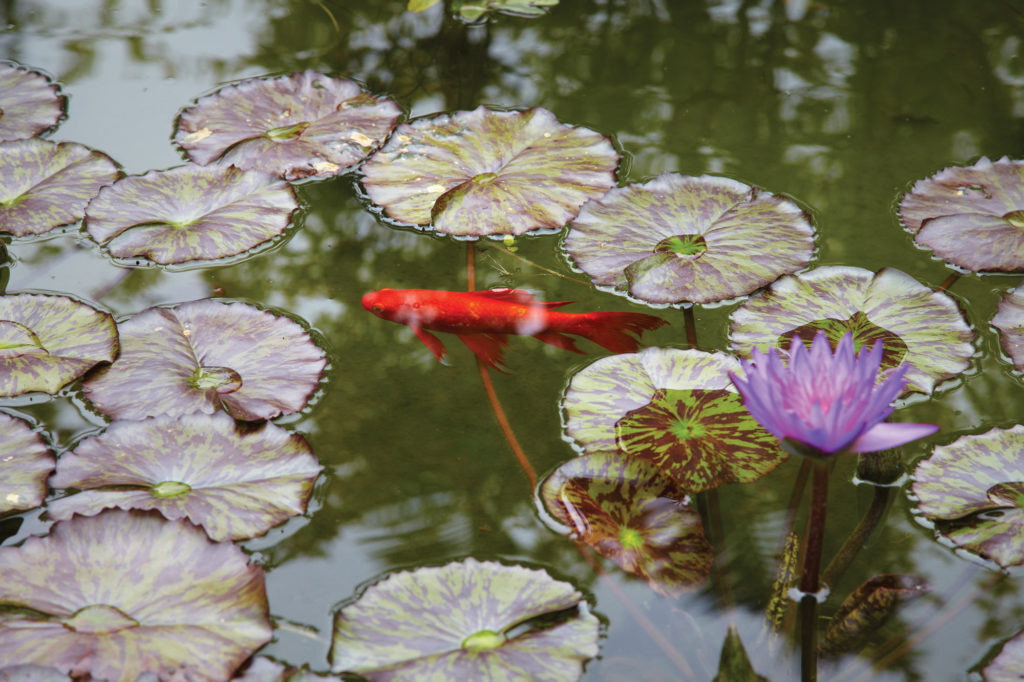 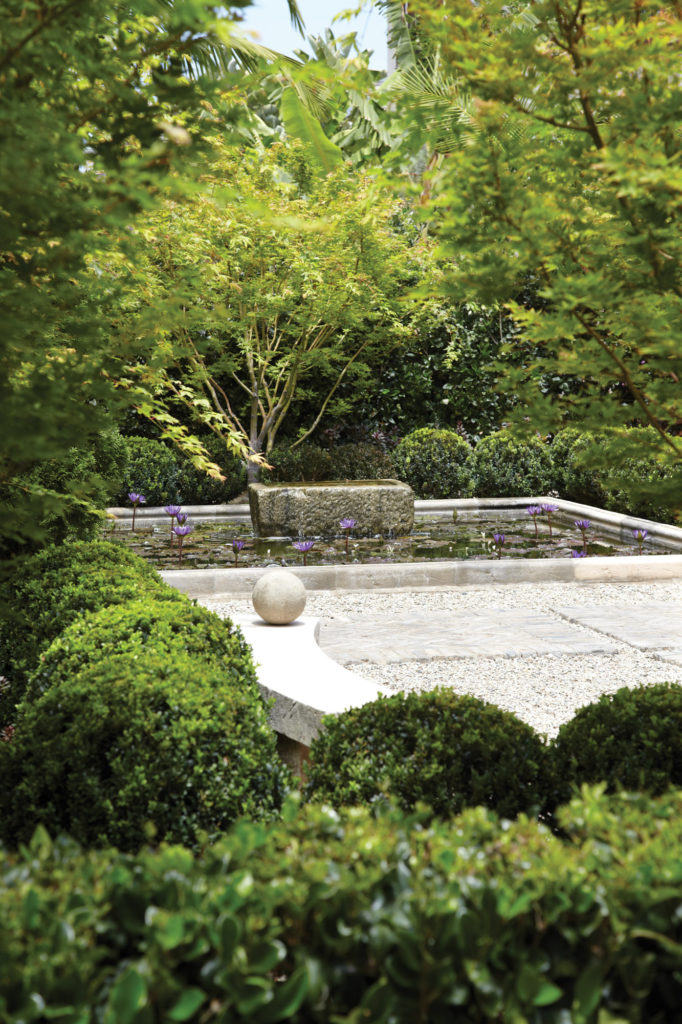 That layout laid the base for Shrader’s creation of a series of gardens as “outdoor rooms” that allow both intimate conversation and large parties. It also recalls Williams’ houses, which often had brick façades. “This set the stage,” Shrader says, “for a simplified planting palette.”

The front area is defined by a 42-inch privet hedge along the front wall, and a surround of Japanese maple trees on three sides for privacy. In back, Shrader created the gardens, flowing from one to the next to inspire different moods, scenes, and uses.

The front garden’s centerpiece is a 10-foot by 10-foot reflecting pool with a 17th-century vessel at its center and floating, purple-tinged water lilies. Tucked near the family room, it provides a true indoor–outdoor experience. The brickwork pathway leads from there to the other gardens, defined by privet hedging, with each space relating to a room in the house, including the kitchen and dining room.

One garden, for lounging and casual dining, is under a steel trellis of lights that acts as an “outdoor ceiling,” beckoning people in the family room to stroll outdoors. Deep seating and casual, custom-made coffee tables provide places to set food or drinks and relax. Outdoor ceilings are a favorite device of Shrader’s. “We can control light, heat, and cold through the use of willow or bamboo, space heaters, and such,” he says. “Here, the ceiling also provides a subtle opportunity for hiding lights, with the space lit against blooming vines such as Stephanotis floribunda, or Madagascar jasmine: intoxicating at night, with the smell of orange blossoms.”

While the gardens are modest in size, they provide occasions for beautiful, and sometimes large, features to dominate, drawing the eye and encouraging guests to give into mesmerizing enchantment. The view across the fire garden, for instance, focuses on a wall-mounted water feature that Shrader and his crew created from a 17th-century feed trough. Finally, a separate garden surrounds the pool at the rear of the property.

Coral-bark Japanese maple trees throughout the property are arresting in shades of coral, their branches artfully set against the gray brick to form a beautiful, natural vignette. There was another, more sentimental reason to include them, Shrader says: “They’re one of Alex’s favorite trees.”