Is it a farmhouse kitchen, a 19th-century butler’s pantry, or a Colonial Revival interpretation? Hard to tell, because the layout, materials, and finishes in this new kitchen are timeless. That makes it a good design model for anyone contemplating a kitchen redo in a house layered with history.

The new kitchen is part of a carriage house built as a model home for a community called The Pinehills in Plymouth, Massachusetts. (A main house was added later.) Referred to as “turn of the century” and “farmhouse” by its designers and builders, the kitchen has an unfussy, transitional style that bridges the end of the Victorian era—particularly its butler’s pantries—and early Colonial Revival design. It’s the kind of kitchen that might have been added to an 18th- or early 19th-century house a hundred years ago, when modern plumbing and electricity became norms. 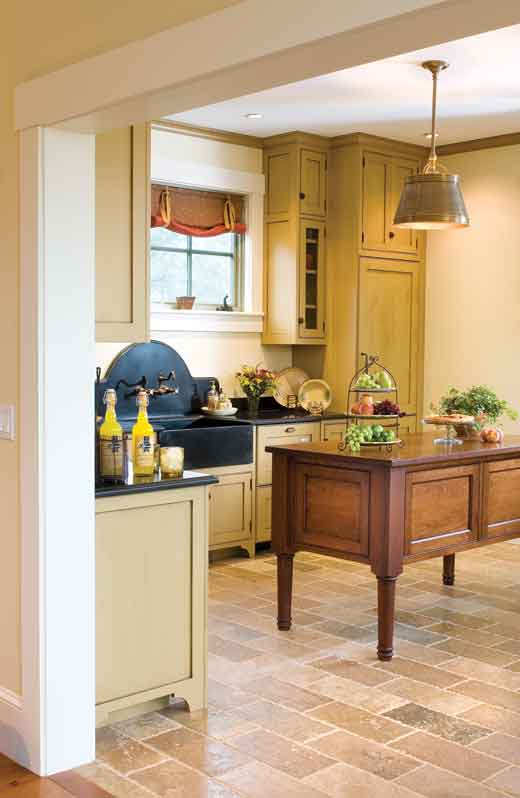 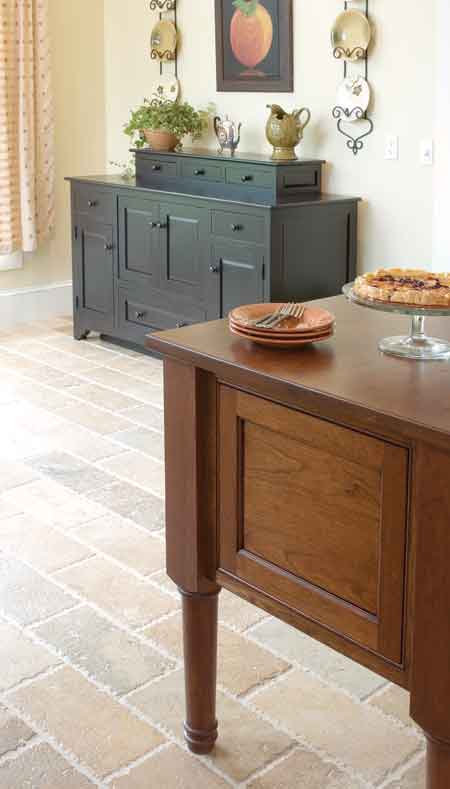 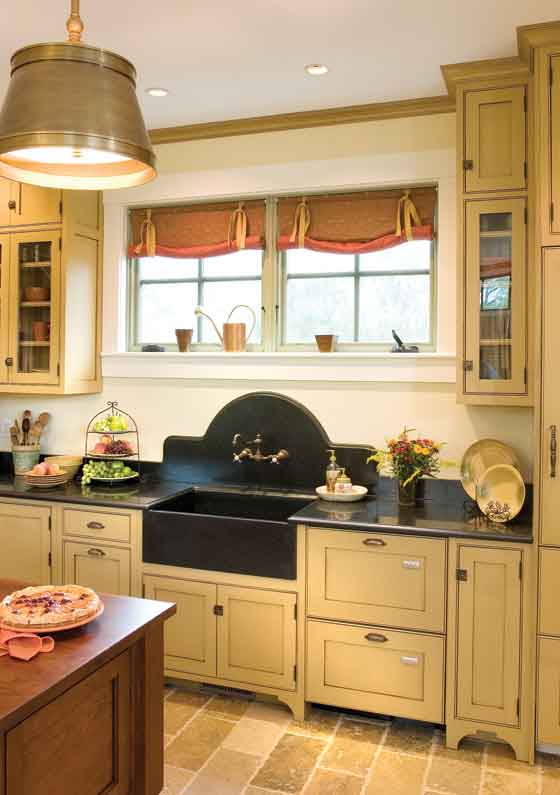 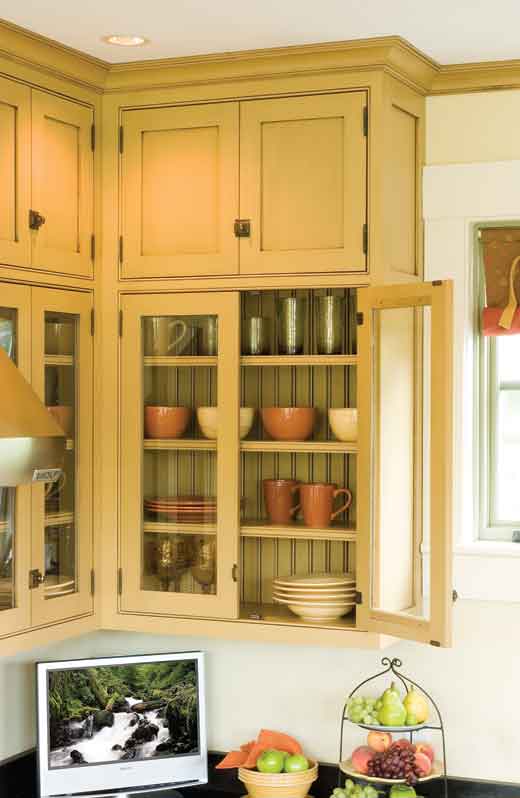 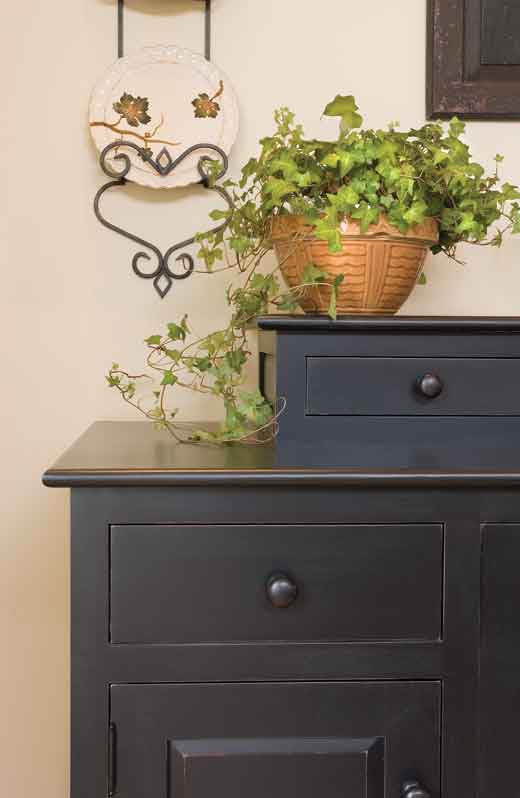 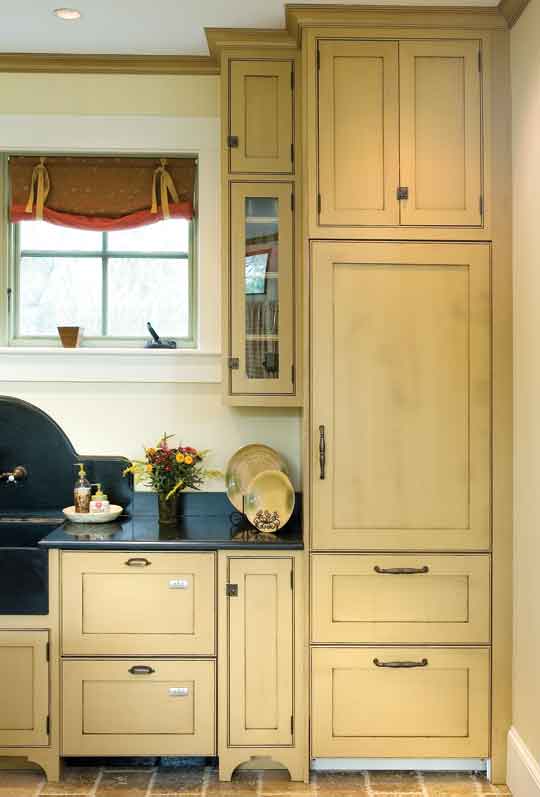 The paint-finished cabinets and the island were built by Crown Point Cabinetry. “We chose the company for the custom craftsmanship, and their ability to create farmhouse-style cabinets with customized paint colors and finish,” says The Pinehills’ Donna Tefft. The island was conceived as an old-fashioned work table. “I wanted it to look like vintage furniture, not a typical modern work island,” says interior designer Lisa Weekes. “The inspiration was a large antique in an old house; Jeff Schneider at Crown Point helped us re-create it in a smaller piece. Jeff was the key to the success of this kitchen.”

Crown Point also built the sideboard in the dining room, which looks like an old piece that might have inspired the kitchen. Actually, it’s new, painted black over barn-red milk paint and burnished to give it a worn appearance. It hides the microwave oven.

Tall, stacked cabinets have the look of period built-ins. They are custom-painted in ‘Buttercream’ with a ‘Mocha’ glaze, which gives the finish depth and patina. Turn-of-the-century-style hardware was provided by Crown Point.

That rounded backsplash behind the sink is a unique focal point. The design started with practicality—keeping water from splashing on the wall under the high window, and providing a generous mounting surface for the old-style faucet. “Other backsplashes we considered seemed too busy,” says Weekes, explaining the decision to use the countertop material. In this case, that’s black granite, honed for a matte finish, its color enhanced by a sealer. The program called for granite, but the designer did not want today’s multi-color, shiny stone. And “I wanted something even blacker than soapstone,” she says.

Check out our article on how to install kitchen cabinets.