“Essentially you’re adapting a portion of an old house to work with the way we presently live in our homes,” says Chris Dallmus, AIA, LEED AP, principal and president of Design Associates in Cambridge, Massachusetts. In the case of a kitchen renovation project he did in Wellesley, it meant opening up a series of tight spaces into a more open floor plan while recreating original interior details using century-old blueprints.

Boston architect Benjamin Proctor designed the Georgian Colonial Revival house in 1918 for Roger W. Babson, founder of Wellesley’s Babson College, with accommodations for a domestic staff. Accordingly, it had a small butler’s pantry and a kitchen of a size suitable only for cooking, along with other small rooms to serve various purposes. The current and prior owners had transformed the spaces to fit their lives, creating a small den, pantry, and breakfast area in addition to the snug kitchen.

They wanted the renovation to provide a larger, more open kitchen, along with a breakfast/dining area, a family area, and a mudroom. Their desired outcome—more space for family to join together and socialize in these areas—reflects the way kitchens have evolved from functional food preparation spaces into hubs of family life.

Kitchens these days, Dallmus says, are usually “prominent spaces within which to live and congregate.” He admits that he originally thought the challenge of creating a modern living space in the old rooms in the residence might be too great.

“We were looking at several fragmented spaces, almost compartmentalized,” he remembers about the first visit to the home. “I initially did not see how we were going to be able to give them a modern kitchen in terms of modern-day lifestyle.”

Dallmus teamed up with a structural engineer and an interior designer to create the perfect solution—a place for 21st-century family life with the details of the original house.

The solution was to take down walls to create a large kitchen with a prominent walnut island with stools for casual eating—a feature that did not exist in 1918. The new kitchen flows into a comfortable family room with a built-in banquette to serve as an open breakfast alcove. Throughout the rooms, the details were designed to match the originals as perfectly as possible.

A lot of the trim—interior window and door frames, moldings, cabinetry, and other elements—are an extension of what exists elsewhere in the house. The kitchen’s marble countertops approximate those that graced the butler’s pantry. The flooring is designed to match the house’s original flooring.

“What you have here is a small addition and a renovation that looks like it might have always been there,” says Dallmus.

However, even with these historically accurate details, modifications are necessary to accommodate modern life. For instance, the new cabinets have toe kicks where none existed in the originals.

“The cabinetry looks and appears as it did in 1918, but it functions like it should in 2016,” Dallmus notes. “The accommodations to the old house are with respect to the architectural detail, but by no means should one expect that you should live in that kitchen as if you were in 1918.”

Along with the island and the toe kicks, some nods to modern life include a pot filler (a retractable faucet over the stove) and a small seating area in the kitchen itself: two slim armchairs and a little table placed on a small carpet. There’s also a built-in bar with a stylishly shaped sink, a simplified, scaled-down version of which might have existed in a butler’s pantry in a home of this era, but certainly not in the kitchen itself.

On either side of the bar are two cushioned window seats. Together with the small seating area, these benches create a kitchen just as suitable for socializing as for cooking, a distinctly modern-day phenomenon. 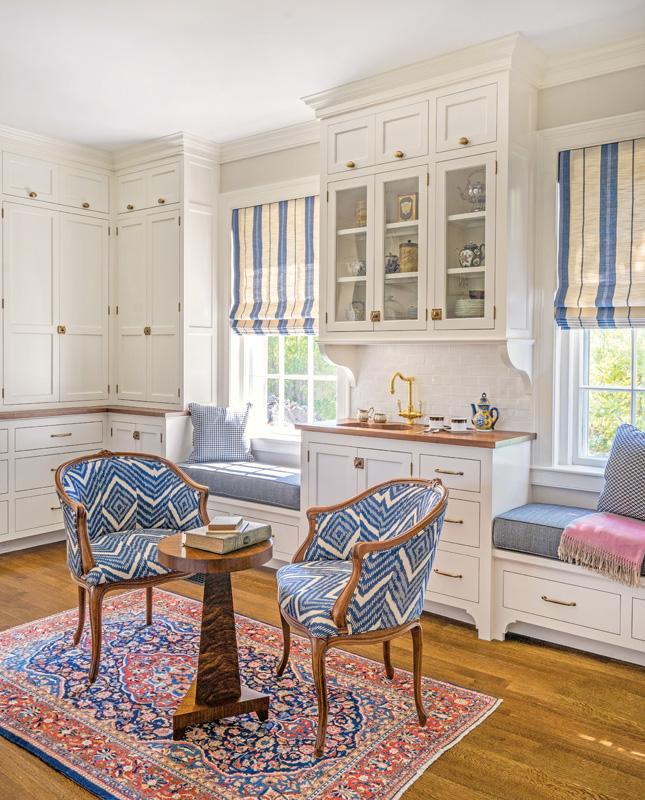 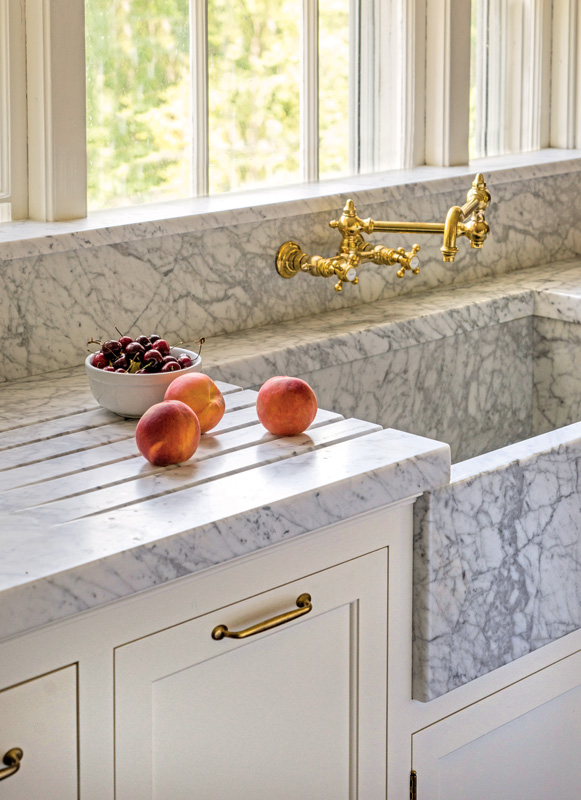 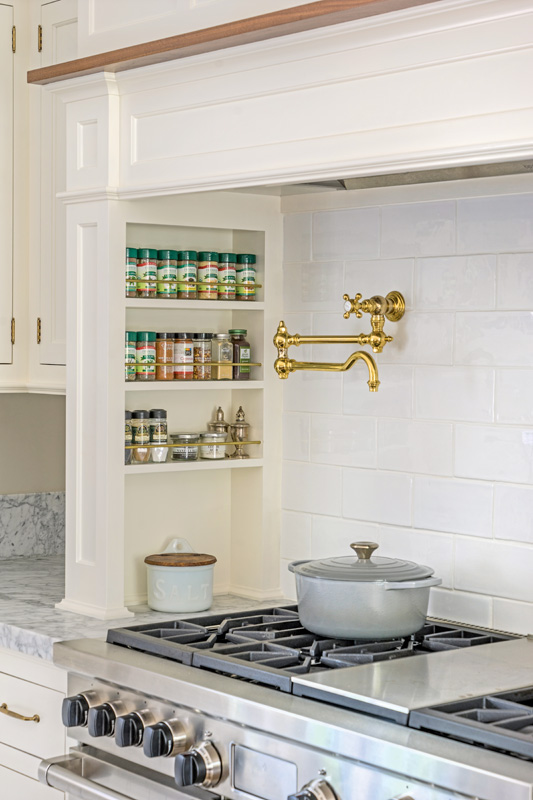 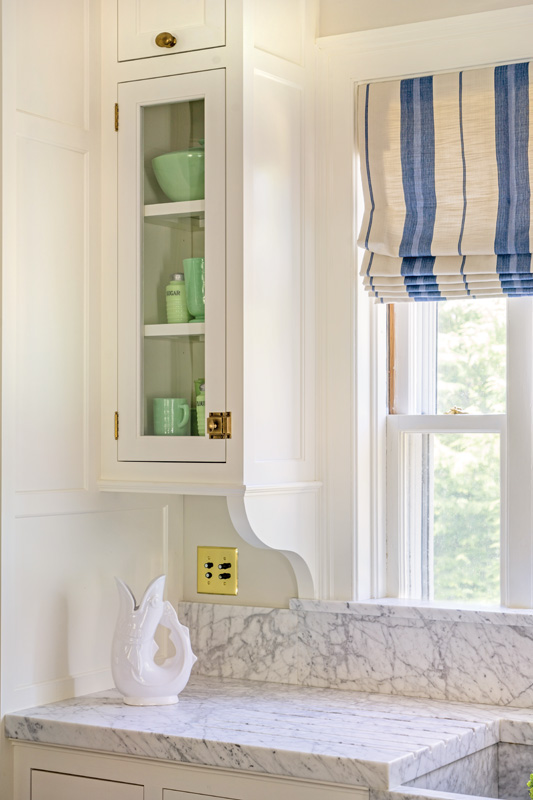 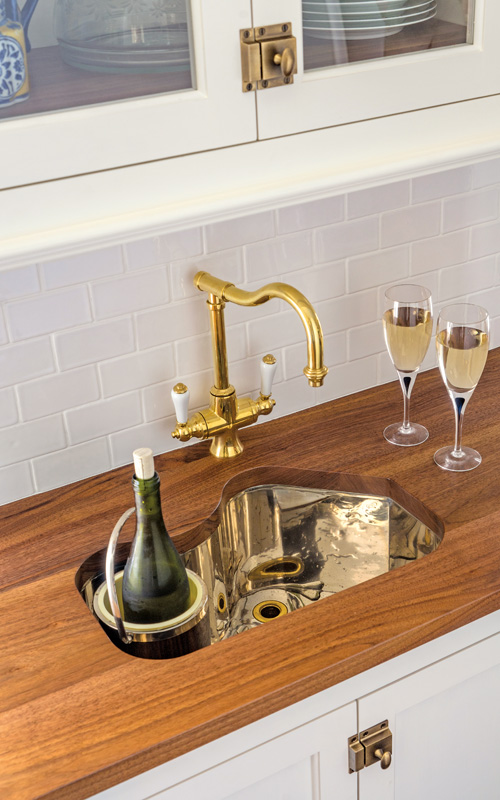 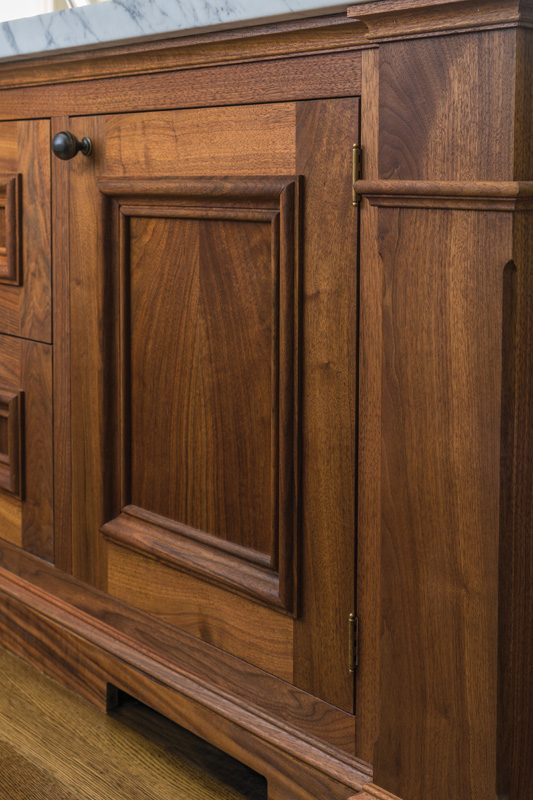 At essence, such a renovation involves creating an updated space “shrouded with the details of the original house,” says Dallmus. The Wellesley project was particularly challenging in this regard, but collaboration with the client and the interior designer allowed his team to create a reworked living space that fit in seamlessly with the rest of the historic home.

Figuring out how to do so, he says, is all part of the creative process. “The thing that we’re bringing to the table is our ability to introduce modern-day lifestyles at the same time being respectful of the architectural detail of the house.”

Ideas for Updating a Traditional Kitchen

Open up the spaces to accommodate the way modern families live—congregating in the kitchen and surrounding areas, with easy flow and clear sightlines among the rooms.

Incorporate various food- and drink-prep areas beyond the kitchen counters, such as a large island or a built-in bar.

Keep architectural details, like trim, flooring, and cabinetry, faithful to the originals, but update functionality, such as by adding toe kicks to cabinets.

Provide seating areas in and around the space, whether by including a few chairs and window seats in the kitchen itself or by building in a breakfast nook in an adjacent room.