When Mickey Berkowitz and his wife, Lynda, bought one of the oldest homes in the picturesque seaside town of Newburyport, Massachusetts, they wanted to do all they could to stay true to the antique home’s First Period pedigree, while also making it as functional as possible for the 21st century. Nowhere did they achieve this more spectacularly than in the home’s kitchen.

The couple enlisted Matthew Lord, principal of Jewett Farms + Co. in Dover, New Hampshire, and Boston to achieve their vision, which Lord describes as “a combination of something that was classic and fitting to the house but at the same time a bit of eclectic, contemporary styling.”

The biggest challenge in the kitchen was its small space, which was filled with odd angles and a very low ceiling. In fact, the ceiling was just over 82″ tall at its highest point, Berkowitz says. To make the kitchen feel more open, the team tore out drywall to expose the centuries-old ceiling beams and sodablasted them, a gentler version of sandblasting that used sodium bicarbonate to clean hundreds of years’ worth of debris off of the beams, resulting in a look that’s soft and clean, but still retains its lovely patina. 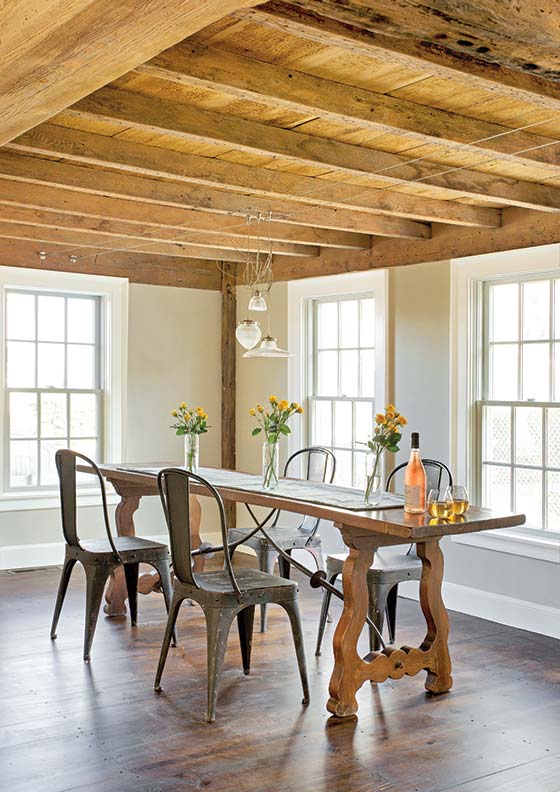 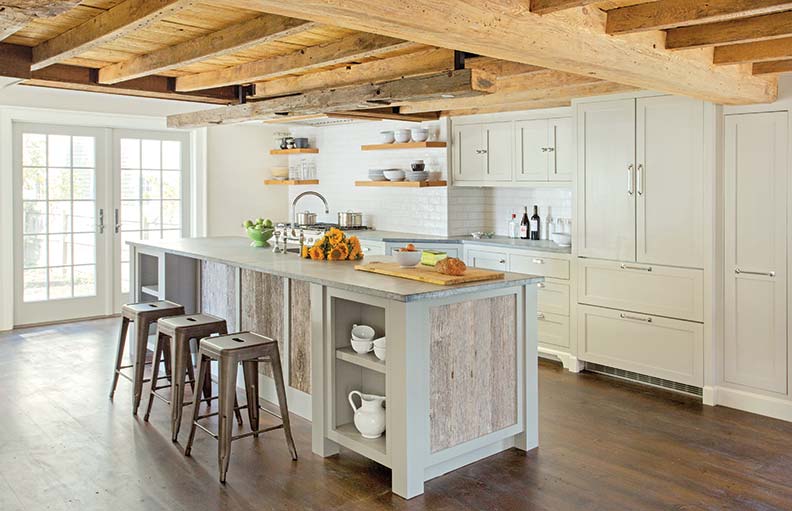 “Once the beams were exposed, a lot of the design, from an aesthetic standpoint, was: How do we work with these exposed beams?” Lord says.

Creative cabinetry was one of the answers. “It required a lot of custom work in creating the angles to make the cabinets fit the walls,” Berkowitz says.

Although they installed the kind of classic inset cabinetry that’s common in traditional New England homes, the design team had to work around the beams and a sharp corner in one of the walls. To do this, the upper cabinets were cut around beams and pipes, and notched to fit the space. Some cabinets also were wrapped around a partial corner to make the kitchen look as seamless as possible. Pull-out cabinetry that was custom-built to fit the kitchen added additional storage to the small space. Floating shelves made out of reclaimed antique oak and outfitted with custom downlighting created a place to store and display plates, bowls, glasses, pitchers, and other pretty kitchen items.

Because of the antique wooden beams on the ceilings and the new wide pine flooring, wood-toned cabinets wouldhave been too much, Lord says. Instead, they opted for hand-painted cabinets in a very light matte sea green, which is “muted enough to be a neutral but still have some color,” Berkowitz says. Although they chose traditional apothecary-style hardware for the draws and cabinets, they opted for a more modern finish of polished chrome to create juxtaposition with the cabinets’ antique look.

The goal was to include hints of modernity “here and there to juxtapose the real classic details in the house,” Lord says. Other touches and details also added to the union of new and old in the kitchen. For instance, although the honed soapstone countertops are very traditional for antique New England homes, the white Carrara marble backsplash is decidedly contemporary. The classic farmhouse sink in the kitchen’s center island is balanced by modern-looking polished chrome fixtures. The La Cornue stove appears to be French vintage but is brand-new, and the vent above it is almost completely hidden by being recessed in a soffit. And the high-end Liebherr refrigerator (which had to be carefully worked into place with just a ¼” clearance under the beams) is completely concealed within the cabinetry.

“Hidden appliances ties in with a 300-year-old house,” Berkowitz says. “The more you can hide them, the better.”

The cabinets weren’t the only elements that were custom-built for the kitchen. The kitchen’s island, where the farmhouse sink is, has the same inset cabinetry as the rest of the kitchen on one side and is open for seating on the other, allowing stools to slide underneath the soapstone countertop. The island also has legs to create more of a furniture type of feel, Lord says. In addition, the end and back panels of the island are made of gray antique barn board that accents the other antique wood in the house.

Because the ceiling was too low for pendant lights, Lord and his team installed recessed lights into a found antique beam and hung the beam over the island from the ceiling, once again hiding a contemporary solution within a traditional-looking item. In addition, natural light floods into the kitchen during the day, thanks to a set of double French doors that open onto the backyard.

In the end, the kitchen remodel reflected and honored the house’s age and history, while still allowing the homeowners to enjoy all of the amenities and conveniences of a contemporary kitchen. “It definitely makes something old out of something new,” Berkowitz says.