No expense was spared for Andrew McNally’s three-story Altadena mansion. The great map maker used his expansive estate as his own personal calling card for those shivering in the Midwest or along the eastern seaboard, beckoning them to the luxe life available only in Southern California. His home embodied the bounty of the San Gabriel Mountains, palm trees and deodar cedars, citrus and olive trees, broad green lawns and sunshine. Even a large aviary for exotic birds to match the colorful arrays of flowers McNally planted throughout the then twelve-acre estate. While there is less land today, the distinctive blue-shingled estate still presides over the valley below, with views out to Catalina Island. 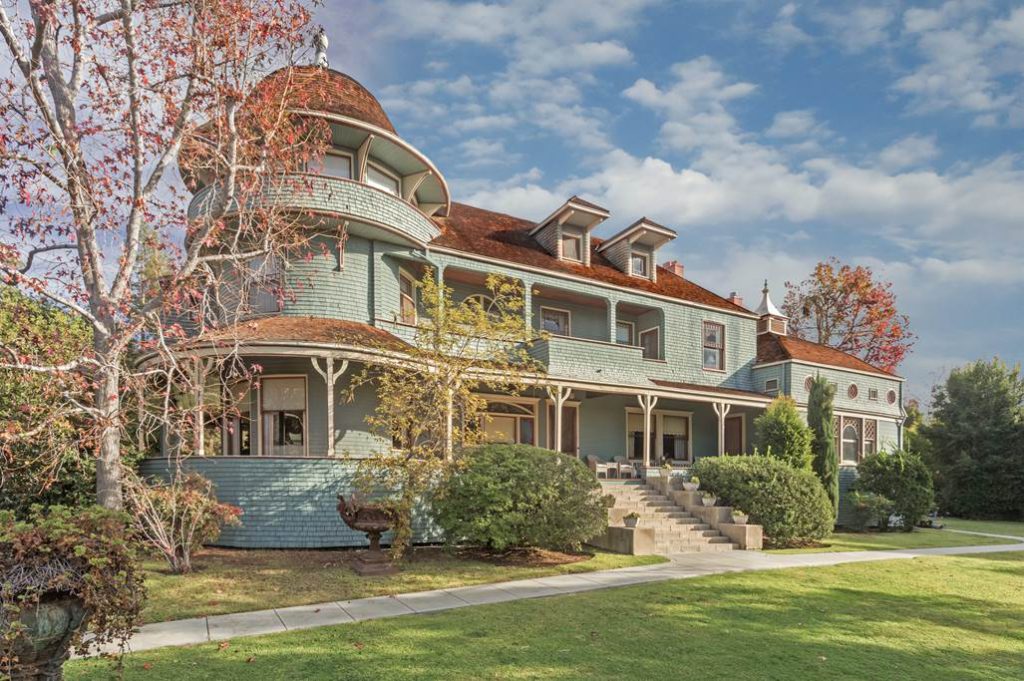 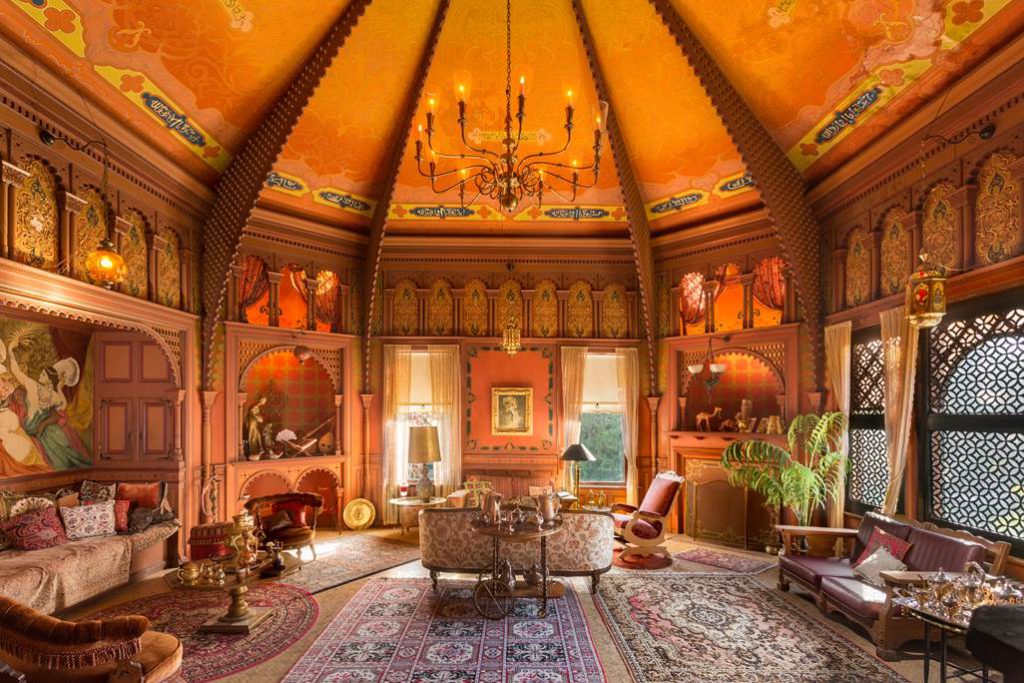 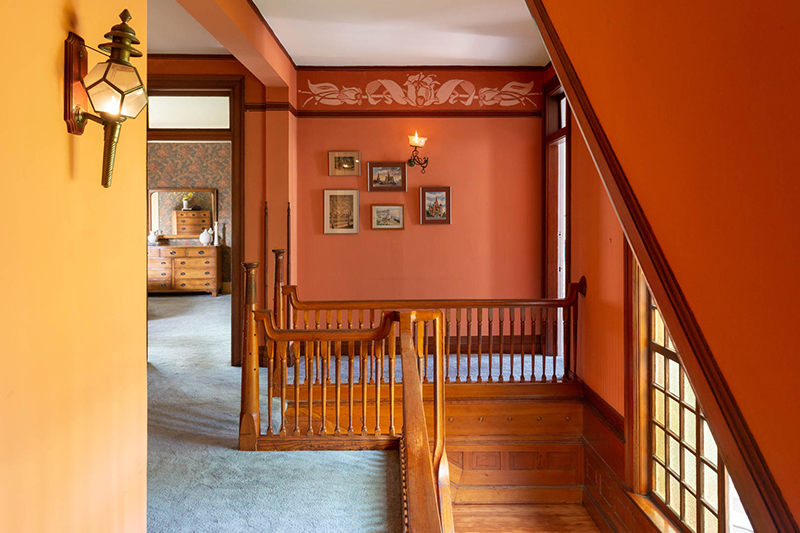 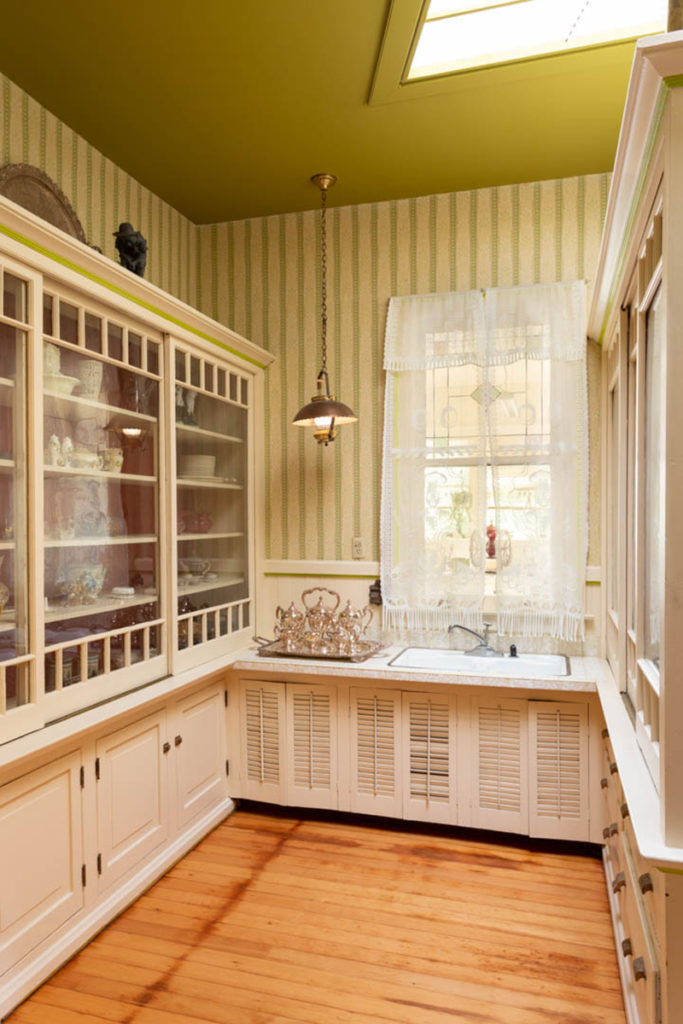 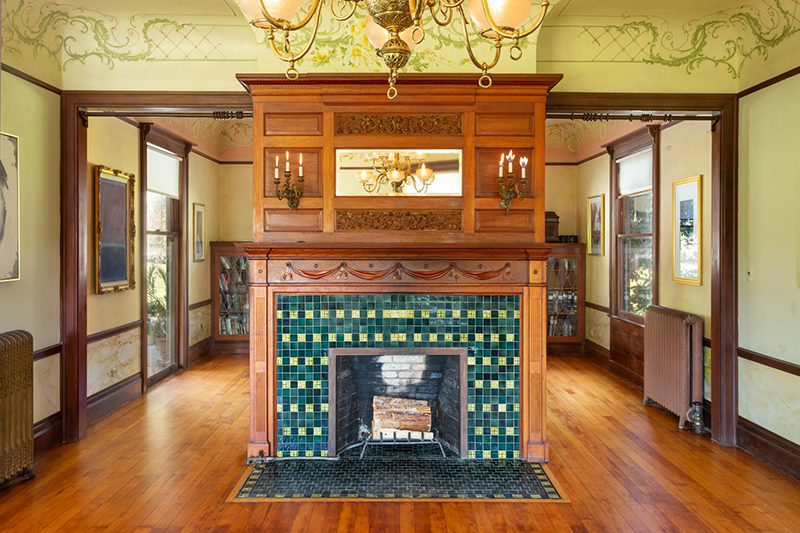 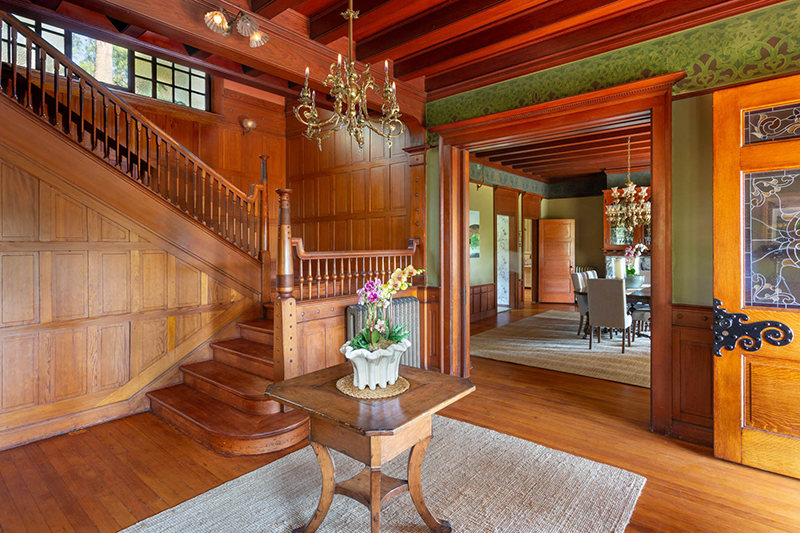 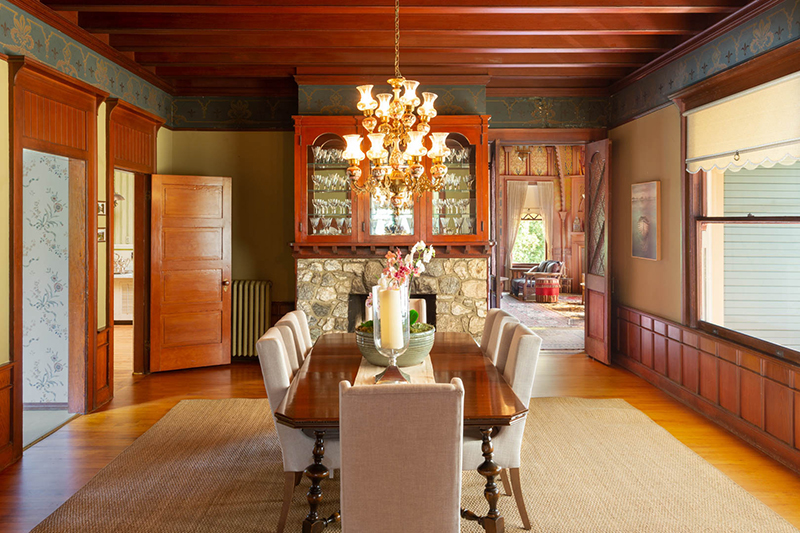 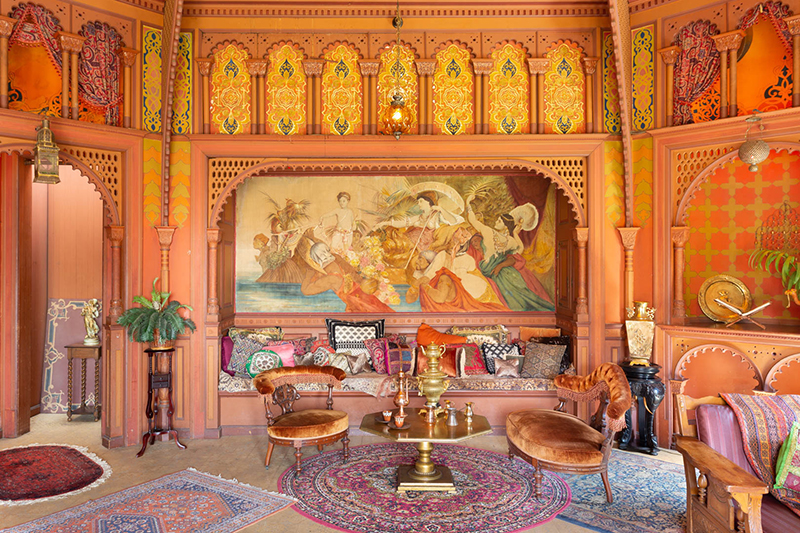 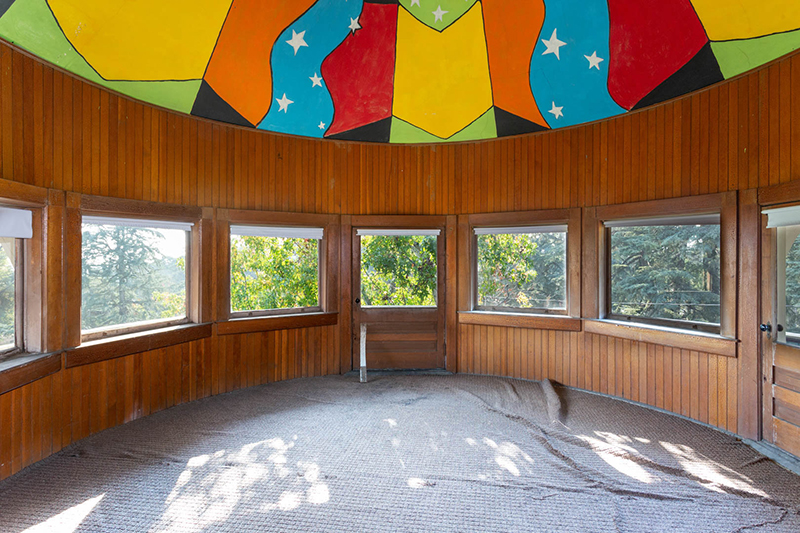 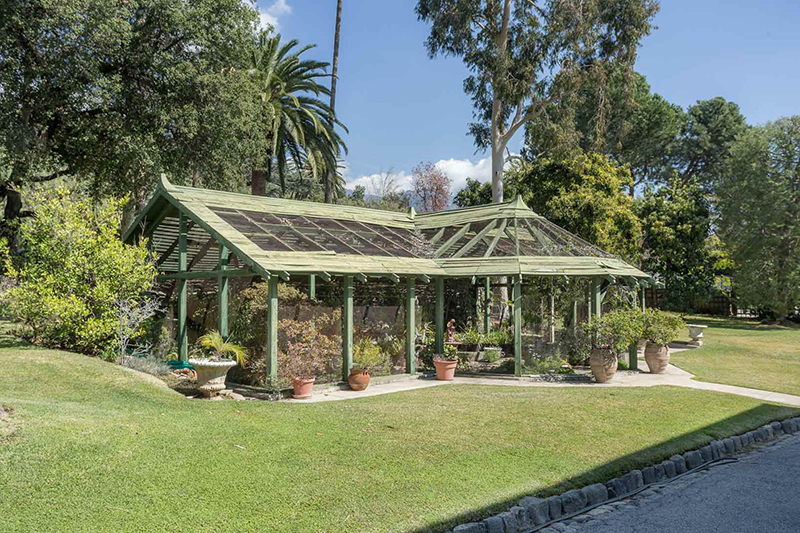 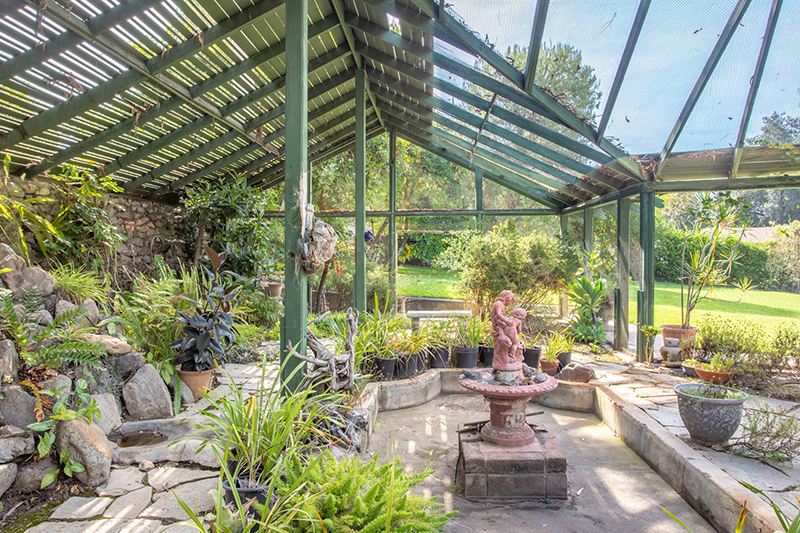 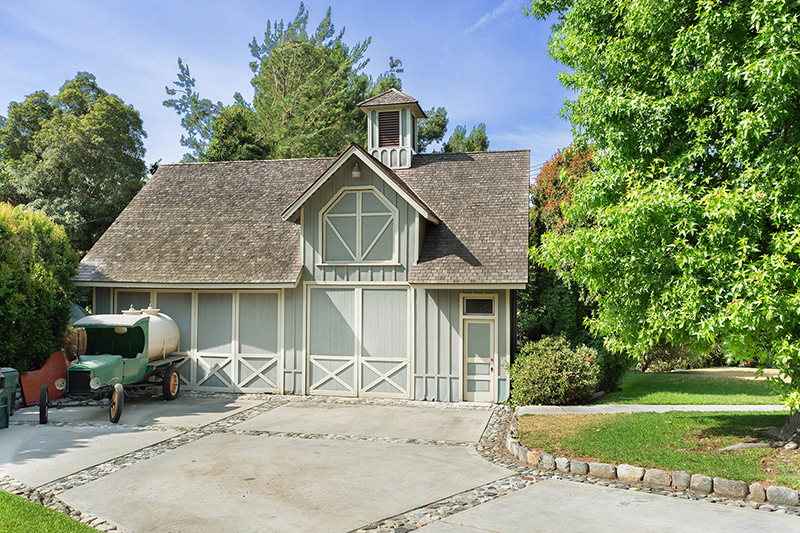 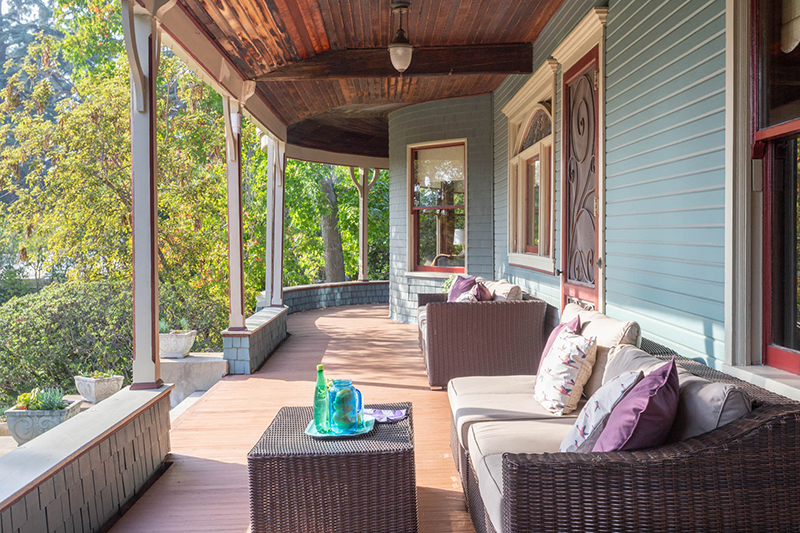 Adjectives to describe McNally’s nearly seven thousand square-foot house are not those we might use for contemporary architecture. Modesty doesn’t work here either. Rather, words such as grand, exotic, eccentric, fit like a glove. Every element of this twenty-two room, nine-bedroom, seven-fireplace, and five-bathroom estate is yet another example of rich original detail. Nearly all of its nineteenth-century features remain intact, from the carved woodwork and paneling of clear heart vertical grain Douglas fir to the jeweled stained glass windows; from the 24 gas lamps—including two chandeliers and several wall sconces—to the ornate steam radiators. (The lamps are still in good working order as are the radiators, these under the calm command of the aristocratic original bronze boiler in the basement.)

The McNally House exemplifies a simplified Queen Anne-style, in which strongly articulated shapes and volumes, such as the tall, round turret anchoring the southwest corner, are integrated with a broader, more relaxed horizontality, so quite different to more vertical Victorians of the day. And unlike its contemporaries that often exhibited fussy ornamented surfaces, a taut “skin” of wood shingles and clapboard unifies the entire house, much like the Shingle-style houses designed by McKim, Mead and White of New York and Newport, Rhode Island fame. Thus, McNally’s home was not the overly pretentious estate that the wealthy so often commissioned in the fin de siècle. In fact, his selection of the young master architect Roehrig was a fait accompli which showed the designer’s artistic prowess while displaying the cartographer’s unprecedented success without the ostentatiousness of their respective peers (at least on the exterior.)

Inside, the home is spacious in a way that is unheard of today. On the ground floor, large public rooms with generous windows in which tall and taller ceilings flow out from the open foyer with its pocket doors of wood-and-leaded glass that lead to the dining room, while a grand wooden staircase (whose startling detailing anticipates the work of Viennese Modernist Otto Wagner) rises to the second floor. A two-sided double fireplace separates the living room from an intimate hideaway of sitting room/library/family room; both rooms feature ornate floral stenciling on the coved ceilings. The dining room is beamed and paneled with its own fireplace capped with an articulated crown of dentil molding and a built-in sideboard. An additional servant’s wing and the legendary Turkish Room were added in 1897. The handsome carriage house/garage east of the house, based on an 1885 illustration, was constructed in 1971 to replace the original that had been destroyed by fire in 1926. The only non-original room is the modernized kitchen, adjacent to two light-filled, intact butler’s pantries that feature beautiful cabinetry and high ceilings.

Listed on the National Register of Historic Places in 2007, the McNally Estate is for sale for the first time in 65 years, and the first time in 100 years that it is publicly on the market. There is nothing else like it in Southern California.

The understated exterior of the McNally House conceals one of the most extraordinary rooms in California, if not the country. The octagonal Turkish Room, also once known as the Smoking Room, is Arabesque opulence at its most exotic. Middle Eastern wood paneling and fabrics of persimmon-colored silks, low sofas and carpets, mix and swirl with wood fluting and carvings that are motifs typical of classical Western and Victoriana architectural detail. Highly stylized Arabic phrases are stenciled onto the upper walls; some say the words are from the Koran, others suggest that the letters are merely a graphic device. Likewise, the room’s geometry is quite remarkable: 24 feet in diameter, it is also 24 feet to the canopied ceiling, as published in a Chicago newspaper in 1898.

McNally entertained his “fumacious” friends here, the “well-known men of Chicago,” including industrialists such as the president of the Santa Fe Railroad; R.T. Crane of the plumbing global conglomerate; or financier J.P. Morgan.

The room’s very presence at the estate is a tantalizing piece of United States history, connecting the ambitious McNally to both the late nineteenth century craze of Moorish Orientalism and to a watershed of American architectural history. The great world’s fair known as the World Columbian Exhibition of 1893 brought examples of each participating country’s culture, design, and industry to what became called “The White City.” Both McNally and his architect Roehrig were bewitched by the “khediva’s room in the Cairo section,” referring to a neighborhood in Egypt – long before Turkey was founded in 1923.

This is where the room’s tangled provenance becomes its own mystery. Some archival documents indicate that when the fair ended in the winter of 1893, McNally bought the room, dismantled it, and had it shipped to Altadena, where it arrived by rail to his private depot at the southern end of his property. Others suggest McNally brought home the interior accessories right out of the khediva room, subsequently commissioning other pieces from Egypt, but then had the rest of the room and its woodwork replicated for the pleasure of his “luxurious smokers.”

Long after the financiers departed with their whiskey and cigars, the room has continued to be a special member of the family. Used for dances, parties, and even housing an irreverent ping pong table for a while, whatever its function it remains intact in every detail.

No one fulfills the role of rags-to-riches Horatio Alger better than Andrew McNally. Born in 1838 to Scottish parents in Armagh, Northern Ireland, as a boy he was indentured to a printer, earning half a crown (50 cents) a month for seven years. (While that may seem brutal, the Great Potato Famine of 1845 to 1849 was underway, killing a million people through starvation. The boy was lucky to have work at all.) At 19, he emigrated to the United States, finding work in Chicago for a printer named William Rand; together they established one of the greatest cartography publishers in the world, Rand, McNally & Co. He became a multi-millionaire. At 42, he made his first trip to California, where a stop in Pasadena changed his life. Impressed with the benevolent climate, fresh air, good soil, and the backdrop of the San Gabriel Mountains, he determined to build a winter home there and become a “gentleman farmer.” He became that farmer when he retired in 1897 at 59. Like many Victorians fascinated by the Industrial Revolution’s far-flung discoveries in science, biology, and genetics, he imported exotic plants and trees as status symbols, planting orange, lemon, and plum trees and populating his aviary with rare Chinese pheasant, a large gamebird with red, orange, yellow and black plumage.

McNally became one of Altadena’s greatest civic boosters, at one time cannily entertaining 12 East Coast newspaper writers to promote articles about the bucolic community. His tireless boosterism worked. Eventually, Chicagoans such as heiress Kate Crane; Col. George Green, developer of the Green Hotel (later the Castle Green); the Scripps and Kellogg publishing families; and even Joseph Medill, editor of the Chicago Tribune, all built homes nearby, establishing an affluent mountain community. Notably, McNally’s daughter married Edwin Neff and bore Wallace Neff, who became a well-known architect in Southern California. Ironically, Andrew McNally died of pneumonia at 66 in 1904, not in wintery Chicago but at his beloved Altadena home.