Either way, it costs money, and having to always spend on a basic need such as water just isn’t right. But with the help of the best tankless reverse osmosis systems, you can make potable water directly from your local tap water.

These systems are tankless, which means that you’ll need to store your water in containers if you want to have plenty of it available at once.

With that being said, here’s what we think are some of the premier reverse osmosis systems available online. (For the sake of brevity, we’ll be using RO instead of “Reverse Osmosis” from here on out.) 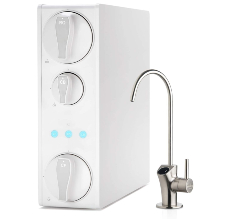 The name of this RO system sounds like it came from the late 2000s. While the use of the “i(Insert product name here)” formula may have fallen out of use over the years, the technology behind this device is anything but dated. And to their credit, it looks like an RO system that Apple would make if they decided to make one themselves. The controls, styles, and minimal features make it feel like a premium RO filtration system.

This RO system features newly updated tech that allows you to fill up your waters and cups faster than ever before. It can distill up to 0.4 gallons per minute, which is a lot for a simple tankless filtration system. The filtration process removes virtually all contaminants, with 99% of them being removed as it passes through the membrane. Finally, the smart faucet lets you know when to change filters and gives you codes for troubleshooting in the event of any problems. 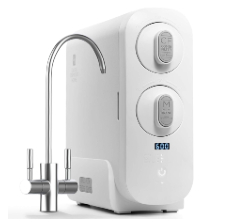 If the steep price point of the iSpring was the main dealbreaker for you, then we’ve got good news – this next RO system is also the cheapest one we’ve reviewed, and it’s got plenty of wonderful features that make it worth every penny. This RO system claims to be far more efficient than traditional models by up to 24% thanks to its low drain rate and high water flow rate. You can have a cup of filtered water ready in just 12 seconds.

The system gets rid of all impurities with an accuracy of 0.0001um. Whether it’s fluoride, metals, or limescale, it’ll all get filtered out during the distillation process. The design of this system means that you don’t need to prepare large amounts of space for a tank beneath or beside your sink. For just under $300, you’re definitely getting your money’s worth, especially if you use the system on a regular basis for your hydration needs. 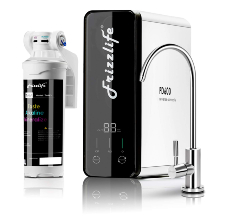 One of the main drawbacks of water distilled from RO systems is that they’re slightly acidic and, even worse, contain little to no minerals whatsoever. After all, the membrane filters out every impurity, and that includes healthy minerals that would have been beneficial to your health. To solve this, the Frizzlife has a remineralization filter that is connected to the main device to make the water slightly alkalinized.

Alkalinized water provides health benefits and is better than what you get out of traditional RO distillation methods. It’s also got a low drain ratio of 1.5:1, and with a no-tank design, you’ll have plenty of room to spare in your kitchen and cabinets below. Arguably the coolest feature, though, is the LED display, as it gives real-time info of your filter and reminds you when you need to change them. 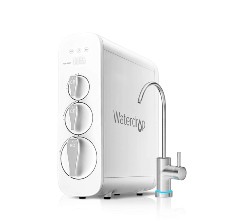 Other than the easy-to-understand indicator, the system also has composite filters that result in up to seven different stages of filtration. One filter is made out of carbon and adds a bit of flavor to the water, too, which is great if you aren’t typically a fan of RO-made water.

You can make your own water in a matter of seconds with a good tankless reverse osmosis system. This brief guide should let you figure out what you need to know about RO systems for your home.

What is a tankless reverse osmosis system?

A tankless reverse osmosis system is a water distillation system that makes use of the process known as reverse osmosis. Reverse osmosis uses a semi-permeable membrane to allow water to pass through while preventing any minerals or larger molecules from joining the water. This results in water that’s void of any impurities. Tankless RO systems don’t have any water tanks connected to them, meaning that water is made as soon as you activate the system.

Why is it important to have tankless reverse osmosis systems?

Clean water is seen as a luxury in many parts of the world, and even in developed cities and neighborhoods, water is often undrinkable due to too many impurities present in it. This forces you to spend more money on gallons upon gallons of distilled water that was processed by a business.

If you just want to have drinkable water available to you anytime you want, then a reverse osmosis or RO system can really help you out.

Distilled water can easily be purchased at a local distilled water store or grocery store. But that can be a chore, especially if you lack the means to transport gallons of distilled water all at once. If you don’t have a car or truck to carry the water with, you’ll have to bring it around by hand, which is both exhausting and impractical.

Instead of spending money and effort on distilled water, all you need to do is turn on your RO system and voila - clean water. No more agonizing trips and cash spent on even more plastic bottles.

It saves space in the kitchen

RO systems sometimes come with tanks to help provide a steady supply of water. These tanks are fairly large, however, and it can be difficult to find space for one in a house that’s already crowded with other items. A tankless version doesn’t have that issue, however. You don’t need to find space for a tank because you won’t be needing one, as the water will simply be filtered on the spot for you to drink instead.

These are a few pointers you should remember when buying a tankless reverse osmosis system.

Flow rate refers to, well, the rate of water that flows out of the system after being filtered. In general, higher flow rates are better, and lower flow rates are, of course, worse. When you take a look at flow rates provided on the store page, it may be confusing, but it’s actually easy to understand once you know what the numbers really mean.

As an example, let’s take a look at this flow rate: “36/45 GPD”. In this case, the 36 GPD refers to the GPD of the system if the water runs at 50 psi, whereas 45 GPD is for conditions where the water runs at 60 psi. The standard in many places is 60 psi, but depending on the environmental conditions, pressure can be much lower, which is why a GPD for 50 psi is also provided as a point of reference.

The design of a tankless RO system may seem secondary, but if you’re going to place it right beside your sink, then you’re going to want to make sure that it looks good in its environment, at the very least. Tankless RO systems these days are made with sleek and minimal contours, making them perfect for minimalist setups. As such, it’s unlikely that you’ll find a tankless RO system that looks great in, say, a rustic home. Still, it never hurts to pick a system that has a great standalone design, as you’ll probably end up admiring its beauty sooner or later.

Tankless reverse osmosis systems aren’t cheap - this is, for the most part, somewhat common knowledge. But there’s also quite a big difference in price between RO systems, with some costing only $300 while others will have you spend well over $500. And that’s not even mentioning the additional filters that you have to buy from the seller after your old filters become unusable. You’ll be spending quite a bit of money on reverse osmosis systems, which is why many people still opt to buy distilled water from external sources.

Q: Is water distilled from RO systems safe to drink?

A: Water distilled using reverse osmosis is perfectly safe to drink, but that doesn’t mean it’s healthy, either. In fact, water distilled from RO systems often contains no minerals whatsoever.

Q: Do I need a tankless RO system at home?

A: If buying water from other sources is proving to be too much of a hassle, then having a tankless RO system can be much easier for you in the long run.

A: Tankless RO systems can be used indefinitely, though you’ll need to replace the filter on a regular basis if you want properly purified water. 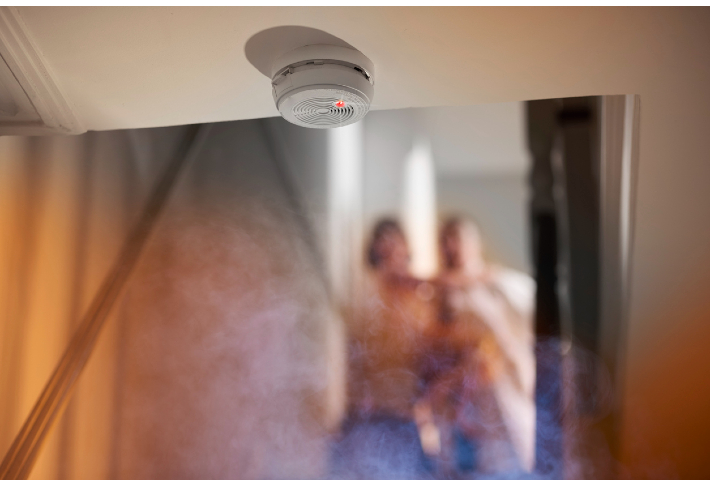 The Best Smoke Detectors For A Safe Home 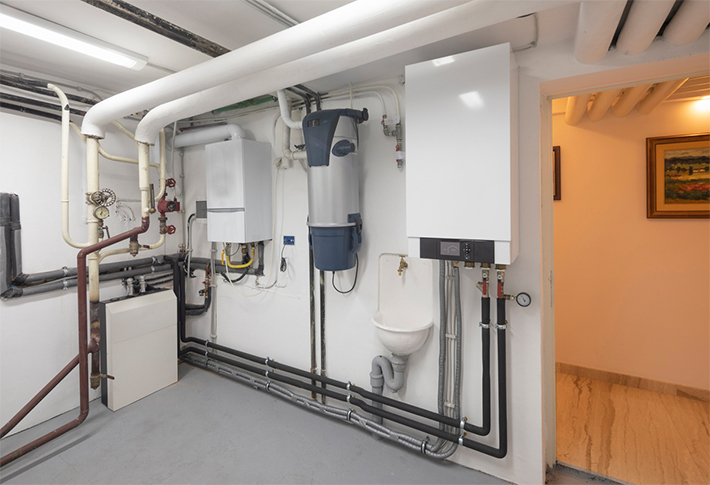 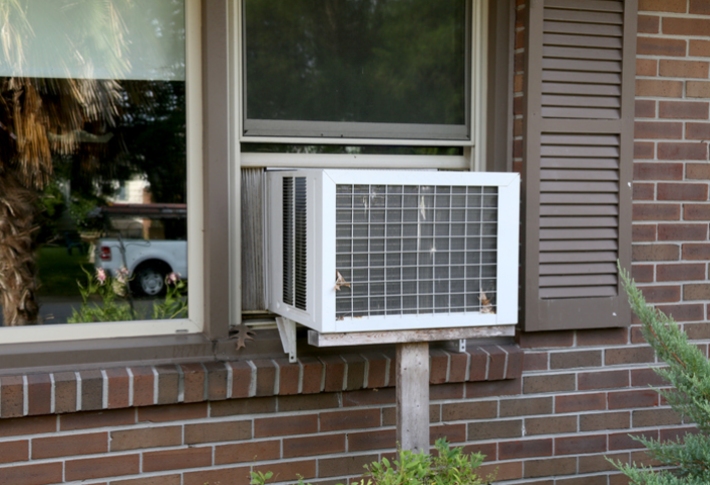 Keep It Cool With the Leading Window Air Conditioners