Having outgrown their garden, these avid preservationists were ready for something more ambitious. They wanted a view; they wanted to see for miles. They would settle for nothing less than a panorama.

By 2001, Mark Prezorski and Owen Davidson had “used up the space for gardening” in the acre and a half around their previous home and went hunting for a “viewshed” in New York’s Hudson River Valley. They’d already visited Olana State Historic Site, where a stunning landscape (both natural and artfully improved) surrounds the Persian Revival mansion of Hudson River School painter Frederic Church (1826–1900). “We never got those breathtaking views out of our heads,” Owen recalls.

At first, five acres was what they had in mind for themselves. This farmhouse near Livingston, however, came with 150 acres and a working orchard. Unable to negotiate for less than the entire property, the two contracted with a farmer to keep the orchard productive. This was too good to pass up: Not only was the view like Olana’s view, but they could even see Olana itself! And, looking back from the crest of the hill at Olana, they could see their new property, which they named River School Farm, on Blue Hill. Their big idea started to take shape. 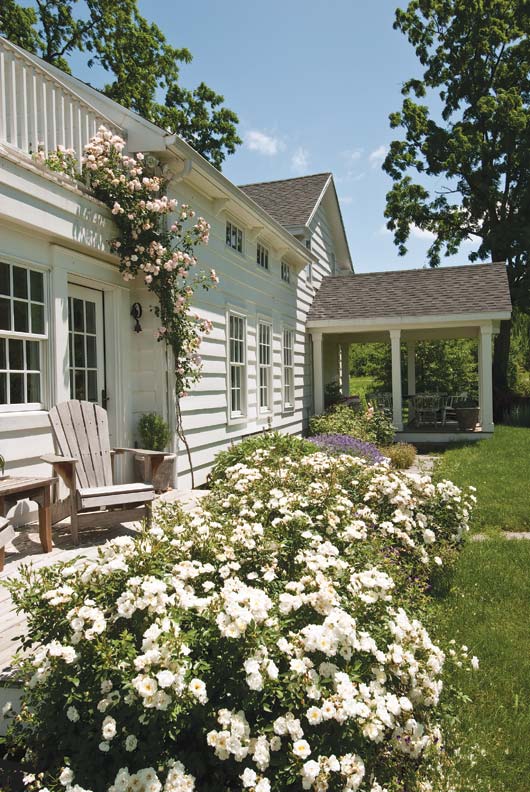 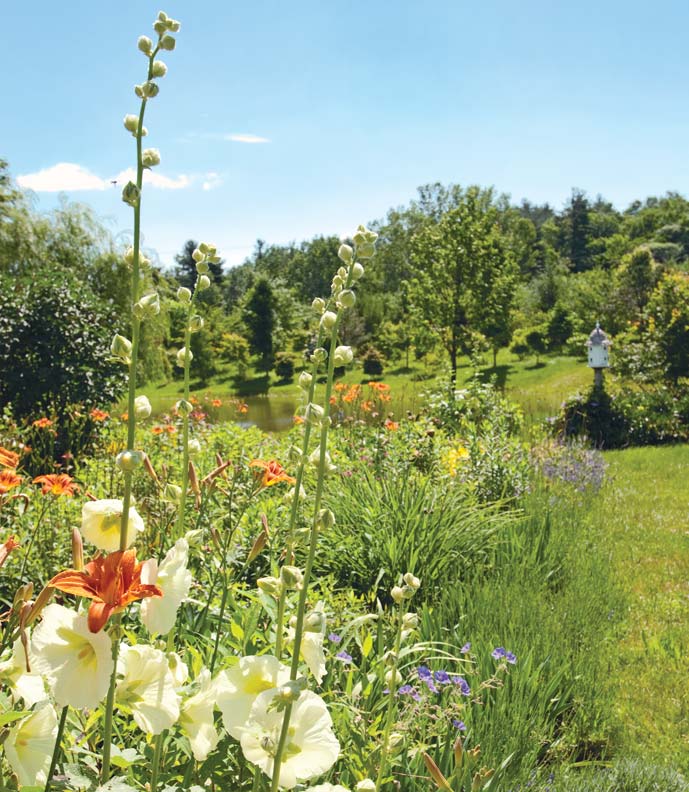 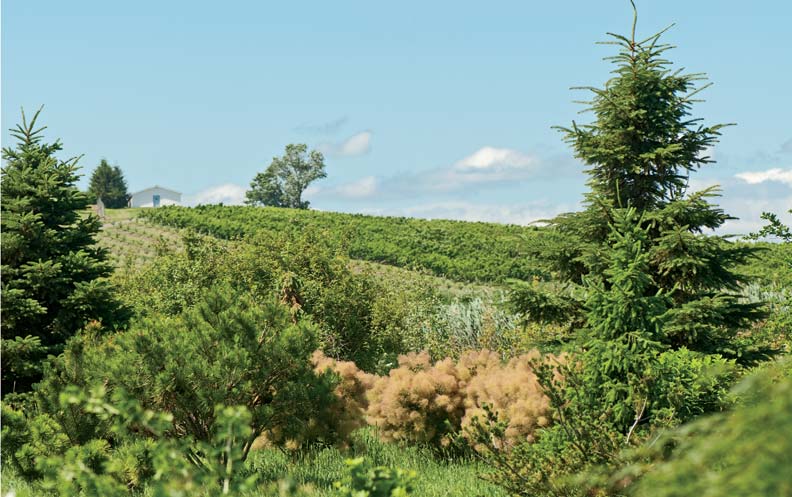 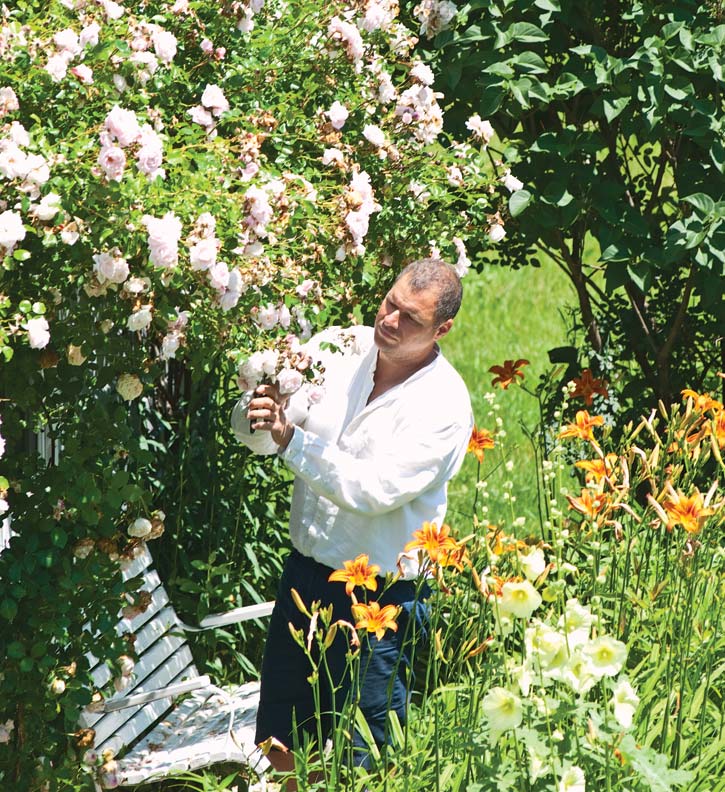 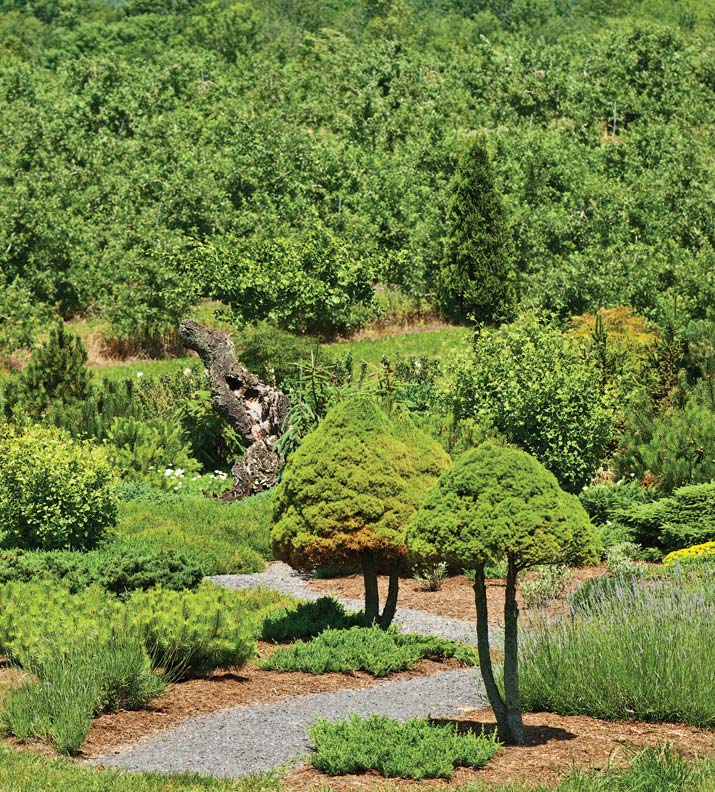 Owen and Mark were sensitive to the reciprocal sight lines from Olana’s perspective. And from their site, they decided that open space was necessary to frame the vista toward Olana. So, while the typical new owner of a run-down 1830 house would swing right into its restoration, these two started by burying the power lines that marred their outlook. Then they went to work with chainsaws, clearing sumac, grapevines, pine trees, and scrub that had grown up around the house. Eventually eight acres around the house had been prepared as cultivated landscape. They include substantial naturalized gardens, flowers, and two ponds (one new, another dug previous to their ownership).

The two men say they are “stewarding an exchange vision,” and that means thinking big. Granted, they did some of the usual gardening all homeowners enjoy: They installed a rock garden, planted perennials around the foundation, and put a flowering border in front of the tool shed. But they concentrated on installing shrubs and trees, planted in groves. Results were not ravishing overnight—but these fellows are in it for the long haul.

The house didn’t have a defined driveway, so creating an entry presentation was an early task. Much to Owen’s delight, a regional rosarian was selling species and heirloom roses that year. “You can never have enough roses,” says Owen, who hails from New Zealand. The inauspicious mailing tube that held dozens of rose whips actually fit in their mailbox, and their hearts sank as they imagined how many years it would take for the rose hedge to mature. Nevertheless, the shrubs have grown to form a substantial hedge on both sides of the drive. The excellent soil had been dredged from the lake when Olana was restored.

It may yet take a lifetime to make the statement Mark and Owen envision—which is fine with them. In the meanwhile, Mark Prezorski now has the position of landscape curator at Olana. The concept of viewsheds is something he champions at every opportunity. Mark suggests that, if more people would consider what their landscapes look like from a distance, this beautiful countryside would be even more majestic.