One of four attached Greek Revival town houses, this property was built in 1853 for a Miss Mary Perry. In 2009, the basement level and carriage house at the rear became separate apartments, leaving the top two floors as a main residence with 1,200 square feet. What character remained in the old house was, unfortunately, stripped away during the conversion to condominiums, and the interior was left bland. At the time, nothing was done to the dusty private yard, save for the addition of a pressure-treated deck and stair for egress.

But this particular house has just one shared wall, so light streams in from three sides. The new owner of the main unit worked with the architect Michael Franck to bring back, and even upgrade, the property. Upstairs, they added a multi-light glass door off the master bedroom, allowing access to the upper terrace. Now it was time to work on the garden view.

The mid-19th-century Greek Revival townhouse had a promising interior layout and wonderful light. Hardwood floors remained, and the kitchen was nicely appointed with marble countertops and slate tile flooring. But “otherwise it was choking in builder-grade updates,” says Will Miller, an Internet developer, who bought the main portion of the house in 2012. 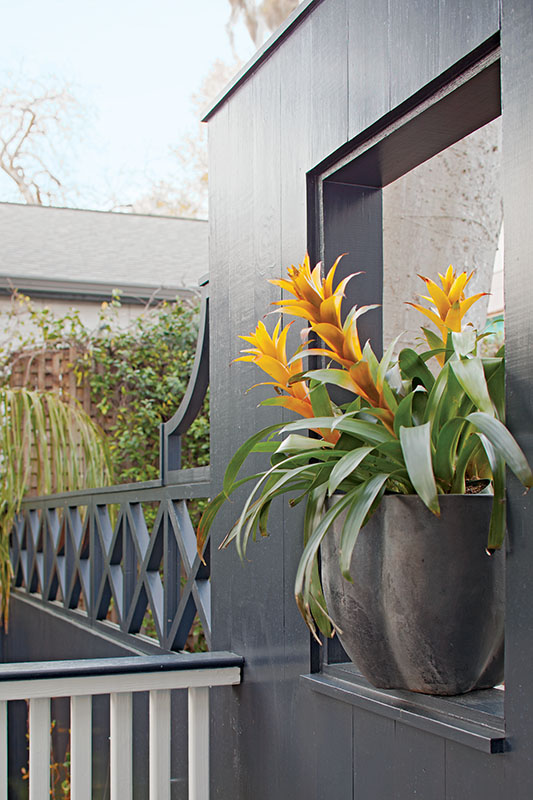 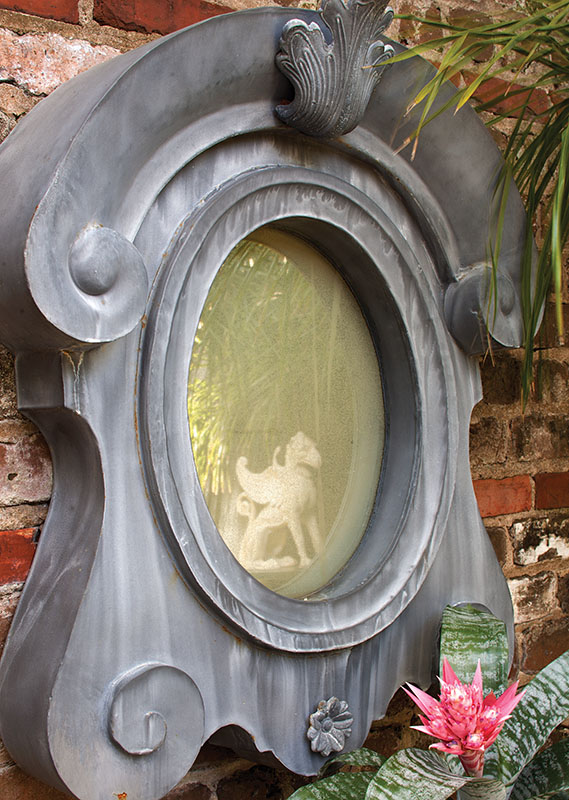 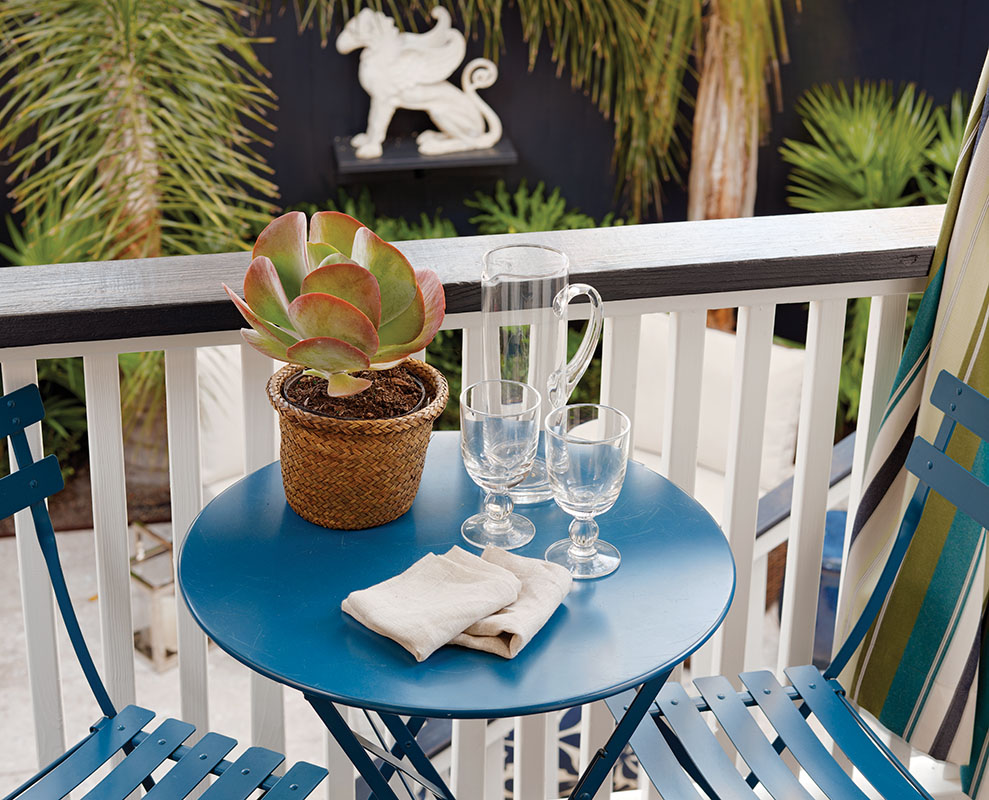 Will grew up in Greensboro, North Carolina, but had been living in Washington, D.C., for several years. When he grew tired of cold winters, he decided to get closer to his roots by settling in Savannah, Georgia, where he looked for a temporary place. “I anticipated a long search for ‘the right property’,” he says. Then he came upon the Greek Revival condo.

“For me it was perfect—it needed enough work that I could make it mine, but it wasn’t a gut renovation.” Will began working on restoration of the two floors, collaborating with architect Michael Franck, of Franck & Lohsen Architects in Washington, D.C.

Inside, hollow-core doors and off-the-shelf details were replaced with period-inspired millwork and antique brass hard-ware. The biggest change was adding a classical colonnade with tall fluted columns between main rooms, which instantly modified the condo-box feel of the place. New mantelpieces are in Greek Revival style. Some of the renovations admittedly were upgrades for this working-class house, the architect says. But all are in keeping with 1850s Greek Revival and also with the scale of the spaces. The house is now furnished with the owners’ collections. 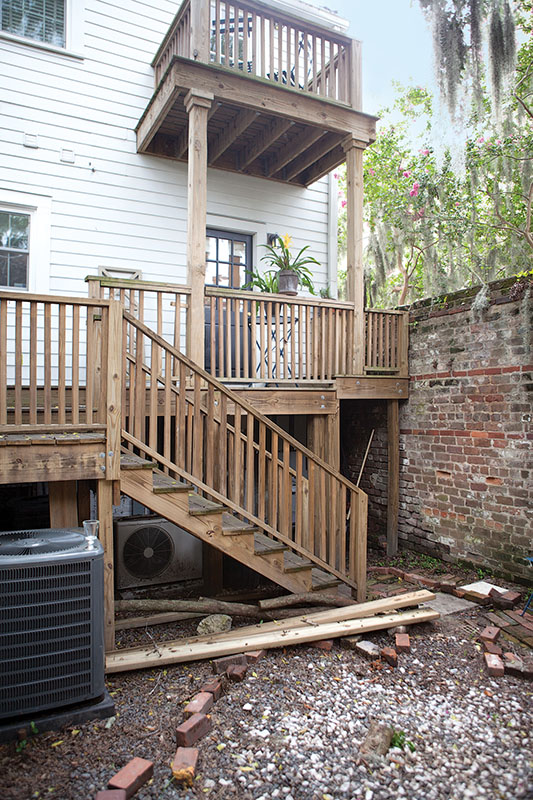 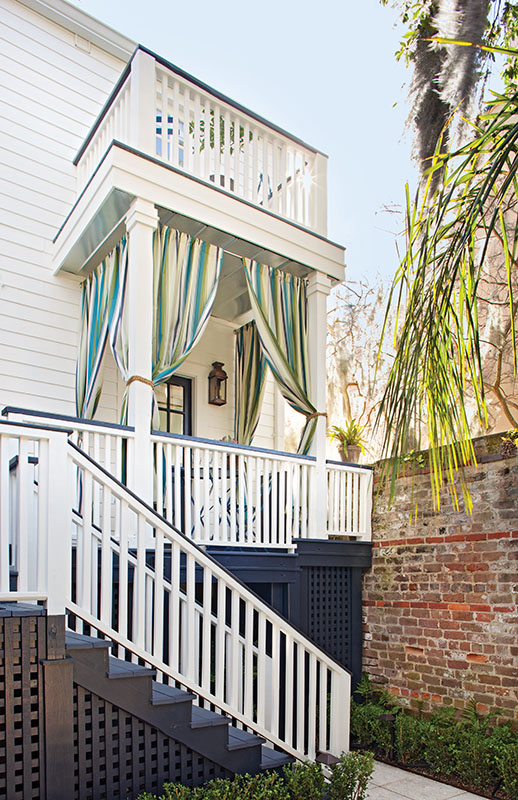 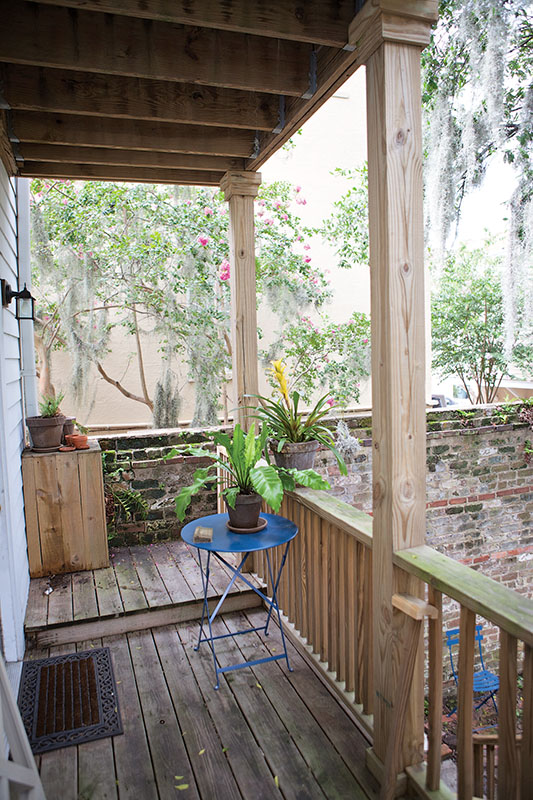 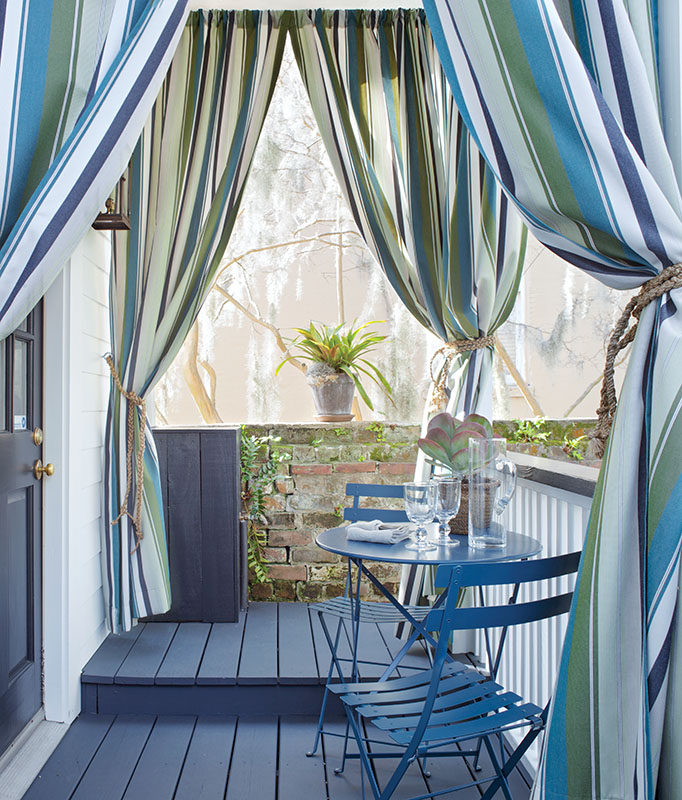 “When you decide to live in a smaller house,” counsels architect Michael Franck, “it doesn’t mean you can’t have grand rooms or a grand garden. Be big and bold in your treatments! You don’t have smaller spaces per se, but rather fewer spaces…

“The renovation is sophisticated, but not overly academic,” Franck says. “My firm works in a classical tradition, but we respect modern sensibilities. The colors used here, for example, befit the Greek Revival house, but the look is calm, fresh, and contemporary.”

MAKE A PLAN
The rear garden had limitations. It started out as a 200-square-foot courtyard littered with broken bricks, an old pale fence, and no plants. An HVAC compressor was exposed and in the way; the near-square yard seemed bland; bricks and wood fence were mismatched.

The new plan, designed by architect Michael Franck in consultation with independent landscape designer Carole Beason, called for tucking the compressor under the stair, then playing up the courtyard’s proportions. On one side there remained a historic brick wall, full of texture, patina, and mellow colors of brown, grey, and green. It was treated as a focal point, bordered but not hidden by low boxwood hedges that continue as a frame for a paved center area. The frame has a narrow, living border for lush plantings of autumn ferns, Chinese fan palms, split-leaf philodendrons, and a pair of queen palms to hide the fence. Opposite the brick wall, espaliered jasmine, trained in a diamond pattern, fills the intimate courtyard with fragrance, its green leaves creating height.

Existing exterior staircases that offered terrace areas were painted in two colors, a clever way to add architectural interest and depth to a plain construction. Waterproofing the upper deck created a dry terrace off the kitchen. 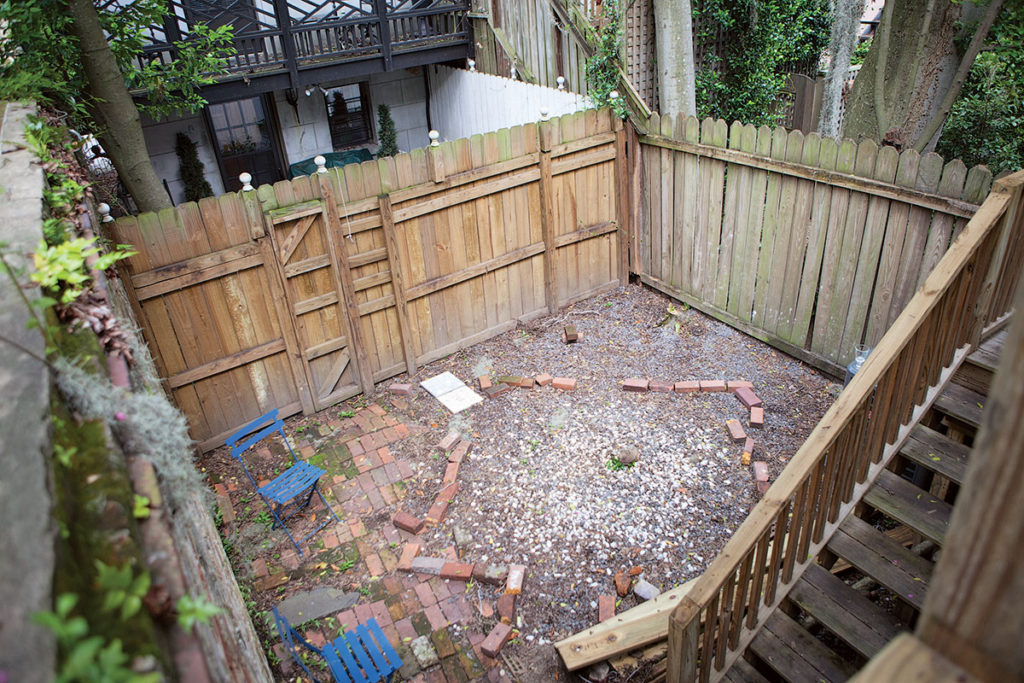 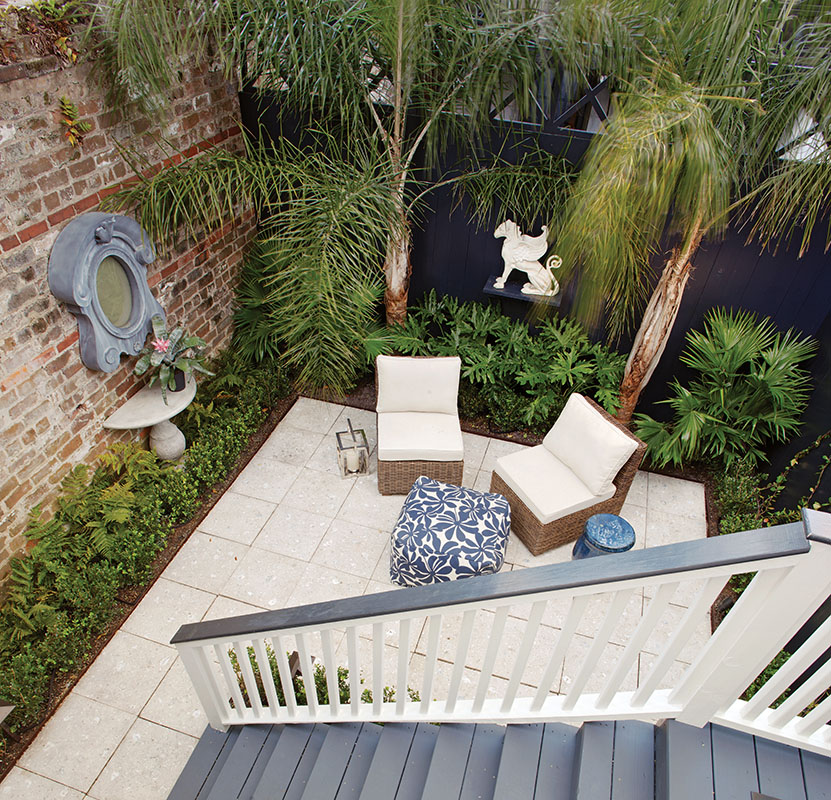 PLAY TO STRENGTHS
The historic brick wall, left alone, suggested a color scheme. The footprint of the courtyard became an asset when it was emphasized with square custom pavers—made of concrete impregnated with oyster shells, and set in sand to percolate. Repetition created cohesion in the roughly square garden.

FURNISH AS ROOMS
The garden area is small, but with each component treated as a room, it provides space for different functions in all weather. The upper terrace has become a sitting room connected to the master bedroom through a new French door. Just below, the landing off the kitchen is treated as a breakfast room. Drapery made of weather-resistant fabric lends not only finish and color, but also protection and a sense of enclosure, adding to the room effect. In the yard itself, pavers, like a carpet, define the area for furnishings that include a pair of well proportioned chairs, an ottoman for extra seating, a blue-glazed garden stool, and a chrome hurricane to protect the candle flame. Even the old brick was treated as you would an interior wall: against it hangs an eye-catching framed mirror over a narrow side table. The garden is lit with simple LED lamps from Home Depot, making it usable at night.