Diane Stoner demands a lot from her Connecticut garden. First of all, she tolerates no slackers in her beds. There’s plenty happening from earliest spring through late autumn on her five-acre property, and that’s no accident. Although not all the perennials, shrubs, and trees are continually flowering, they prove their worth in other ways. Berries might be part of the plant’s agenda, or perhaps the foliage is its strong suit, maybe it’s the silhouette in winter. All this explains why roses are no longer the mainstay.

Diane thought she wanted a rose garden—which seemed so suitable for her 1850 home. And she’s always dreamed of having one: billowing bushes smothered with intoxicatingly fragrant flowers! She dreamed of heirloom roses—the old-fashioned types with names like ‘Maiden’s Blush’ and ‘Königon von Dänemark.’ But, it turns out, these blossom only briefly. After she created her first garden, Diane got an extravaganza of bloom for a few brief weeks. And wall-to-wall work with scant reward for the rest of the season. 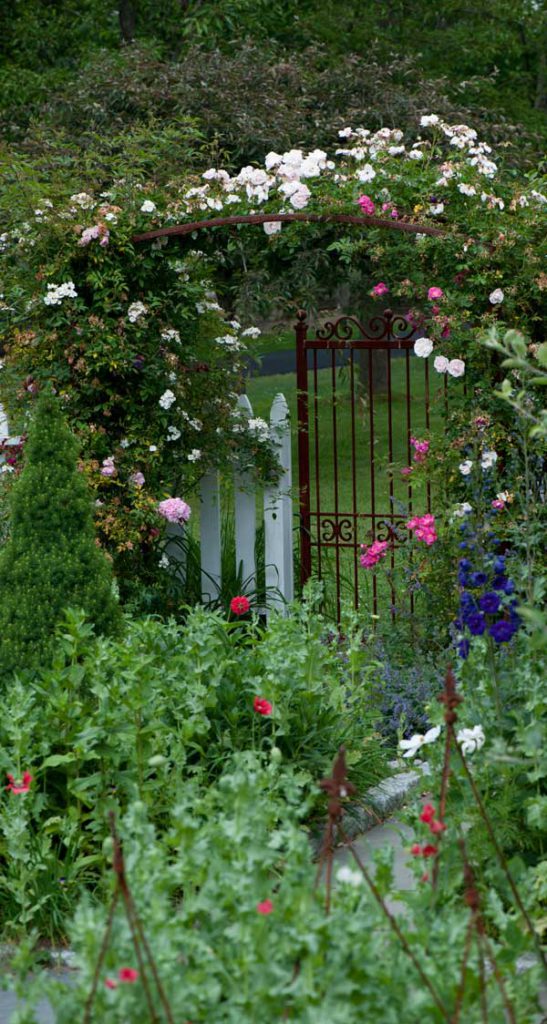 Anything would have been an improvement when Diane and David Stoner moved into the small farmhouse in 1986. The modest residence had been connected to a dairy farm of a couple hundred acres. Back in 1900, the house was moved, and the majority of its property was parceled out until, by the time the Stoners came, the house sat on a manageable five acres. It was heaven on earth for a gardener: “No standing water, 18″-deep loamy soil with great drainage and full sun,” Stoner boasts. There were rocks, or course (Stoner says they’re “Connecticut potatoes”), but “we made stone walls with them.”

Diane spent her formative years living beside the family’s apricot orchard in California, and that has everything to do with this recent labor of love. “They say that, as an adult, you try to re-create your childhood home,” she notes. She valued the majestic old maple and apple trees that came with the property. But the “miserable little hostas” and “deer-macerated yews” were less to her liking.

Diane set priorities. First she built a hedgerow to block out the cars-on-blocks eyesore next door; with that view screened, they could move on. Years later, when the car-graveyard neighbors sold their property and the scene next door turned lovely, the Stoners celebrated by removing their hedge and opening up the view to the pond. Today there is a seamless segue between the two properties.

Diane began by planting trees and shrubs. “I didn’t plan it out,” she explains, “I just started digging holes.” That said, she had an ultimatum for the plants she hired. “They couldn’t just block out the neighbors; every plant had to pull its own weight.” Her requirements included interest beyond a spring flower display. She expected her shrubs to display comely foliage after flowering and show off a striking silhouette while naked in winter. If berries were part of their résumé, all the better.
Her first garden was an herb garden, and it was sedate but uneventful. “I wanted my heart to beat faster,” she likes to say. That’s where the rose garden came in. Meanwhile, the house had been expanded, inviting her to attach gardens as wings to the additions. The day finally came when Diane put in a double allée of roses perpendicular to the borders running along the house. And thus began her servitude.

For the sake of fragrance, she’d gone the old rose route, with a heavy emphasis on Albas and Damasks. Some died, right off the bat. Several lingered but didn’t flourish. “It is the world’s windiest hill—what was I thinking?” she says in hindsight. Heirloom roses underwhelmed her. “It was a three-week love affair—then I was their slave.”

The rest of the property was going well. She put in a formal garden (she calls it her “cutting garden”) on the side of the house, centered on a dwarf ‘Golden Russet’ cider apple (its rough skin deters apple maggots). In the geometric beds around the ap ple, she planted heirloom flowers that echo the retrospective mood. Armenian poppies with raging orange flowers parade around the ankles of espaliered ‘Bartlett’ pears beside the barn.

Diane’s husband, David, got into the act. David has always marshaled the vegetable garden. At first he grew crops that weren’t at the supermarket—parsnips, Brussels sprouts, sorrel. With the rise of farmers’ markets, his produce might not be novel, but he still grows varieties he finds tastiest.

“He’s an engineer,” Diane says, rolling her eyes. “”The whole vegetable garden is on Excel spreadsheets.” David has the growing calendar down to a science, starting seeds in a greenhouse attached to the garage (he’s an outspoken fan of Johnny’s Selected Seeds). The eating garden nurtures blueberries, raspberries, and blackberries protected from the birds by berry cages.

Still, the garden was too much for two to maintain. When the Stoners added a new bedroom wing, they decided to streamline, putting the addition in what had been the rose garden. The formal “cutting garden” is intact, but now bluestone paths with an edging of Belgian brick reduces the amount of time spent weeding the old gravel paths.