Gloucester, Massachusetts, is famous for its fishing history. The books Captains Courageous by Rudyard Kipling and The Perfect Storm by Sebastian Junger were written about Gloucester’s fishermen. Hollywood made blockbuster movies from both, adding another layer of myth.

Even before Gloucester became “Fishtown,” it was a seafaring place, thanks to a deep and wide natural harbor. Local son Elias Davis saw great successes as a privateer during the Revolutionary War; soon after, he became known as Captain Elias Davis, one of Cape Ann’s most successful shipping merchants. By the turn of the 19th century, he owned a number of vessels, including the ship Cadmus and the brig Augusta.

Between 1799 and 1804, Davis commissioned housewright Jacob Smith to build a home for his family in the center of town. Smith, who also built the country’s first Universalist Church a few blocks away, designed and erected a three-storey Federal house with corner quoins and a fanlight over the front door. Captain Davis and his wife, Lucy, raised nine children in this house.

The Davis family sold the house in the middle of the 19th century; by 1860, it had become a two-family home. In 1923, the Cape Ann Scientific and Literary Association bought the building. Founded in 1873, the organization that was devoted to improving the minds of citizens had been without a permanent site. The Davis house had great appeal as a headquarters: It was one of the rare early Gloucester houses with an identifiable builder, and the history of the Davis family was knitted into that of the community. It was across the street from an imposing city hall erected during the Victorian era. Informally called the “Scientific,” the organization became the Cape Ann Historical Association and eventually the Cape Ann Museum, which holds a superb collection of American sculpture, fishing-industry artifacts, and works by the myriad artists who have come to visit or live on Cape Ann. Theirs is the country’s foremost collection of works by the mid-19th-century luminist painter Fitz Henry Lane, a Gloucester native.

The collections did not, of course, fit into the Davis House. By the middle of the 20th century, the Museum had outgrown existing space. Expansions have resulted in a thoroughly modern museum. Yet the Davis House remains a centerpiece of the collections.

Today it is furnished with primarily Colonial- and Federal-era pieces donated in the 1920s, including objects from the Davis family. The Museum is fortunate to own a portrait of Captain Elias Davis, which was painted in Antwerp in the 1790s; a sampler stitched by his daughter Mary in 1818, which lists all the family members; a pencil drawing of the house done in 1830 by Elias Davis’s son Solomon Haskell Davis; and passports for two family vessels, signed by James Madison and John Adams, respectively.

Recently the Cape Ann Museum installed well-chosen period wallpapers in the four main rooms downstairs. Wood block-printed by Adelphi Paper Hangings of Sharon Springs, New York, the period-accurate papers decorate the dining room, the central hall and stairway, the front parlor, and the back parlor. These beautifully proportioned rooms have come alive with pattern and color, a truer representation of the tastes of the times. We can’t help but believe that Elias Davis would love the way his house looks now.

The four rooms recently wallpapered are those open to the public. Block-printed by Adelphi, the papers are reproductions of late 18th- and early 19th-century patterns.

Faux stone-block patterns were fashionable in stairhalls in the early 19th century, so the hall is an ideal place for ‘Fancy Ashlar’. The paper also references the house’s quoins, wooden exterior corner trim meant to appear like stone blocks. The sunny dining room is papered with ‘Moses Grant Stripe’, named after the prominent early 19th-century Boston paper-hanger who first printed the pattern. In the front parlor, ‘Adena Pin Ring’ is named after the Adena Mansion in Chillicothe, Ohio, where this paper was installed in 1808. It most likely originated in France. The paper is embellished with a border known as ‘Rose and Sprig’. Dating to ca. 1795–1810, it was found in an abandoned tavern in Maine. The rear parlor is papered with ‘Coffered Rosette’, a strongly graphic, architectural pattern of unknown origin.

When Adelphi prints these reproduction wallpapers, it does so with engraved wooden blocks with faces made of Swiss pear wood, just as they were over 200 years ago. This results in a unique look.

“The appearance is distinct from all other printing methods,” says Steve Larson, who, along with Chris Ohrstrom, founded Adelphi in 1999. “It is not flat . . . you can see the paint thickness on the paper.”

The restrained, almost severe New England Federal exterior of the Captain Elias Davis House belies the wealth of exquisite woodwork inside. Jacob Smith, the housewright who built the stylish house, clearly knew that nothing conveyed wealth and sophistication like fancy millwork. Rooms have embellished chair rails, classical Georgian over-mantel treatments, crown mouldings, and carving. A Federal reeded frieze decorates wainscoting, the staircase, and the fireplace wall in the front parlor, where the cornice has deeply incised dentils. The back parlor is more restrained, yet boasts a built-in corner cabinet with a carved shell motif. The millwork is especially impressive when we consider that each piece was made by hand; power tools were still a long time off. 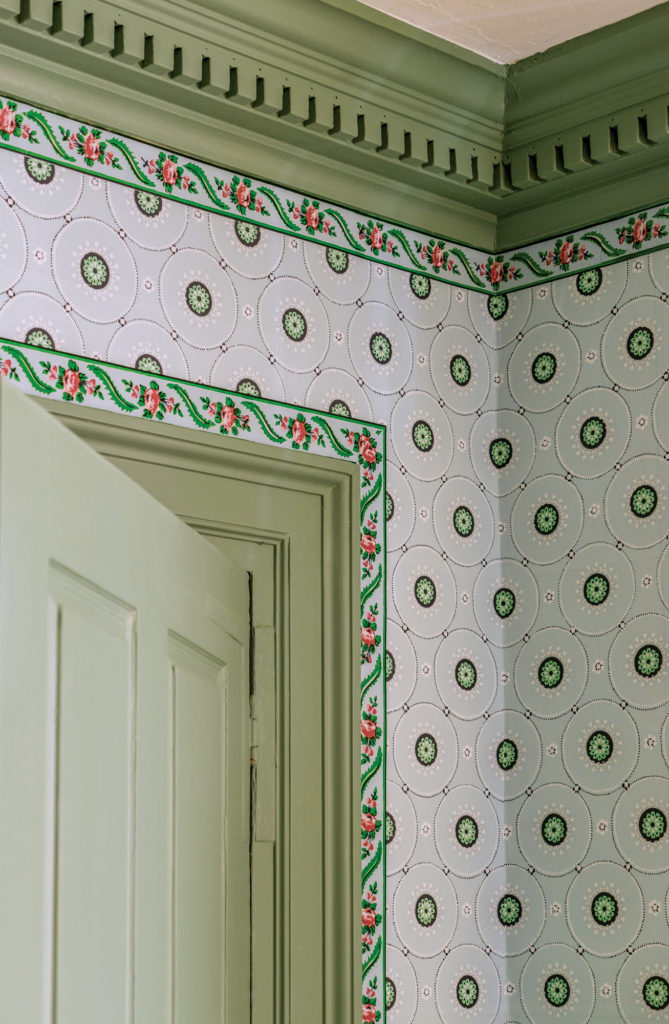