Having lived in a city apartment, “we wanted a house with personality,” say Julie Longabardi, a magazine art director. “We wanted a period house with a sense of place.” She and her husband, Erik, had been living in the Williamsburg section of Brooklyn when, in 2014, they bought a historic house in Roslyn, New York. The town on Long Island’s North Shore is known for a historic center where homes date from the early-18th to the late-19th century. Its geographically advantageous location is only 20 minutes from the city, but surrounded by natural beauty.

“Roslyn was founded in the 1630s as a close-in source of produce for people in New York City,” says Erik, who teaches art to autistic children in the City’s public schools. “We both grew up in mid-20th-century houses on Long Island. We were drawn to the historic feel of Roslyn. When we first saw this house, on a street full of old houses, we fell in love with it.”

This house that spoke to them likely was built in the early 1830s, although no records remain. Its rubble foundation is an indicator: historians claim that rubble foundations to the sills were used in Roslyn until about 1835. Originally, the house was a simple three-bay clapboard cottage with one and one-half storeys under a pitched roof. It had six-over-six windows, a large central brick chimney, and a shed-roofed east wing that served as the kitchen. The second owner, Samuel Dugan Jr., bought the house in 1888. A carpenter, Dugan mounted three separate renovation campaigns over 15 years.

“He Victorianized the house, added the gambrel roof, and built the barn-like shop that is now our living room,” explain the Longabardis. In the first renovation, completed in July of 1889, Dugan enlarged the window openings and replaced the six-over-six sash with two-over-two. He replaced the small loft-level windows with a pair of windowed dormers, added a bay to the north side of the house, and built the first iteration of his carpentry shop. In a second, undated, renovation, he moved the front door from the street-facing west side of the house to the south side. In 1902, his third renovation raised the roof and converted it to a gambrel, and the whole house was shingled. Dugan also added a dining room behind the north parlor, complete with glass-front, built-in china cupboards hanging above the rail.

Along the way, Dugan added wainscoting, laid oak strip flooring over original pine floorboards, and poured concrete on the hearths to bring them up the new floor level. He applied ogee mouldings to the new bay windows and old door surrounds, and he covered fireplace mantels.

Subsequent owners found original elements under Samuel Dugan’s accretions; as strip flooring and concrete on the hearths were removed, wide pine boards and brick came back to light. Under newer wainscoting, old sheathing boards still wore their original blue paint. Julie and Erik, who have done no structural 29 work of their own, are the fascinated heirs of a house that has been done, redone, undone—but mostly left alone.

The north parlor exemplifies Dugan’s work. He added an angular, three-window bay and Victorian-era crown moulding. The south parlor, which is located to the left of the entry hall, retains the original vertical sheathing to the ceiling, which had been covered with plaster and a wainscot. When, in the 1980s, previous owners removed those layers, they were delighted to see the old, worn blue paint still on the wood.

“When you come through the door and see the beautiful old painted boards, it’s always gratifying,” Julie says. “Every day, it reminds me that this is what we were looking for when we dramed of owning an old house.”

To the right of the south parlor, the kitchen is in its original location, though the original lean-to was improved over the years. Renovated in the 1990s, this room was another thing that drew Erik and Julie. “The cabinets were made by a Pennsylvania carpenter, and just outside the window is a retaining wall,” Julie says. “Some of the kitchen is below grade; the house was built into the steep hillside. The view is nice.” The working parts of the room are practical and frank: black granite countertops, stainless-steel appliances. 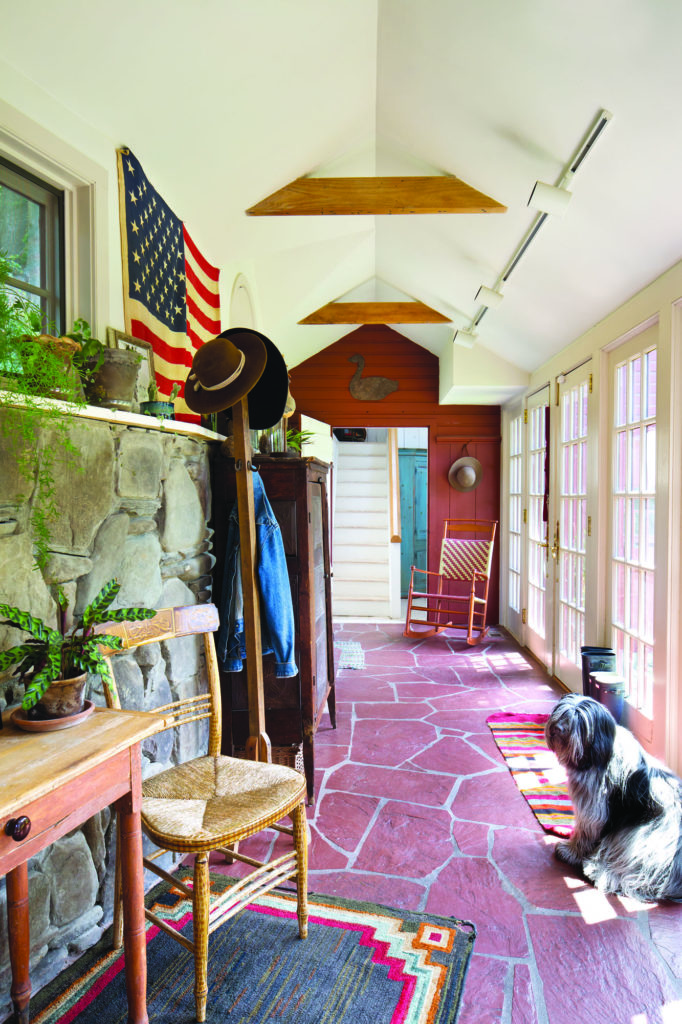 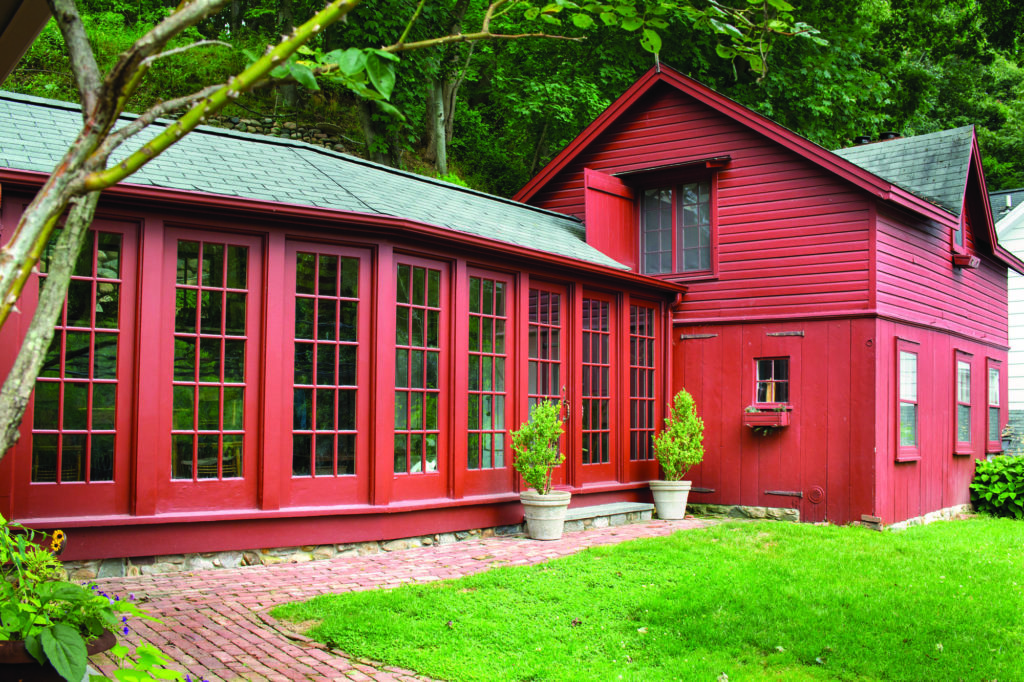 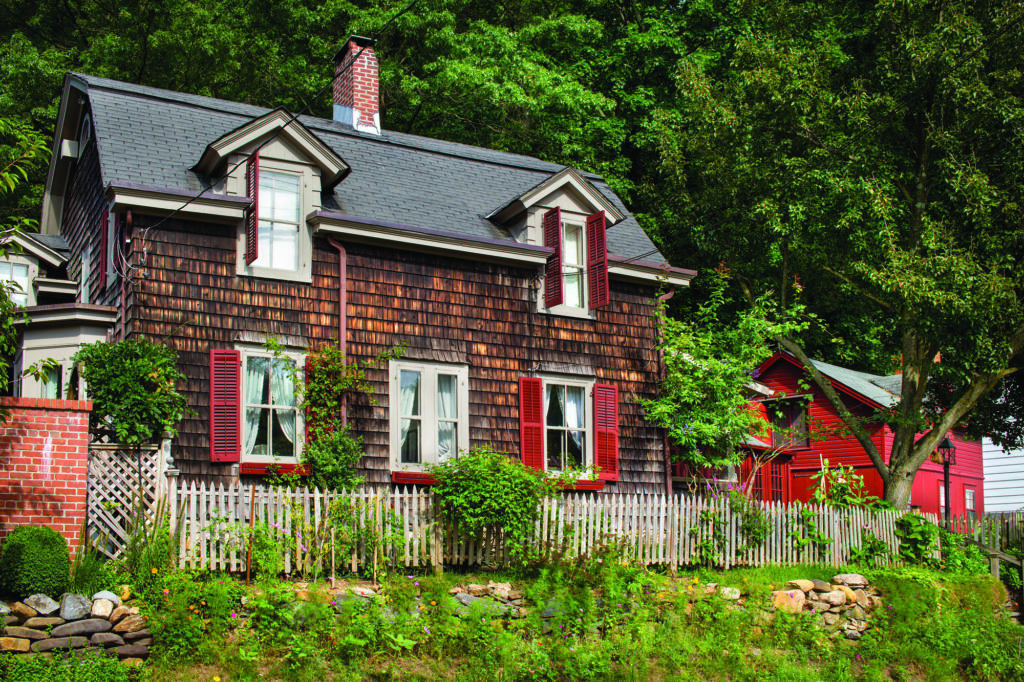 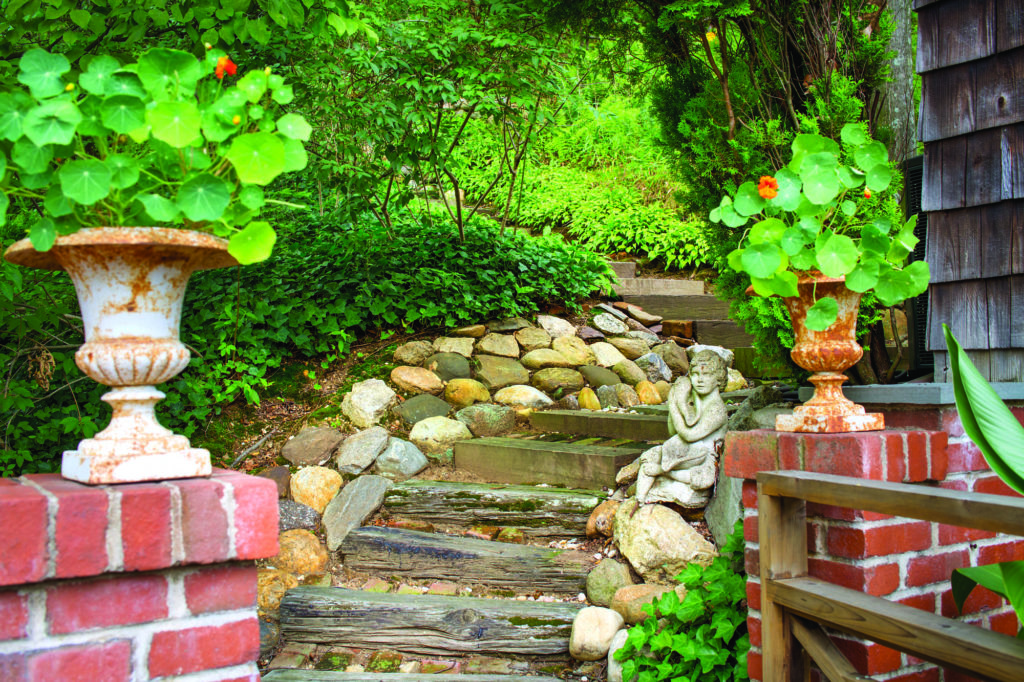 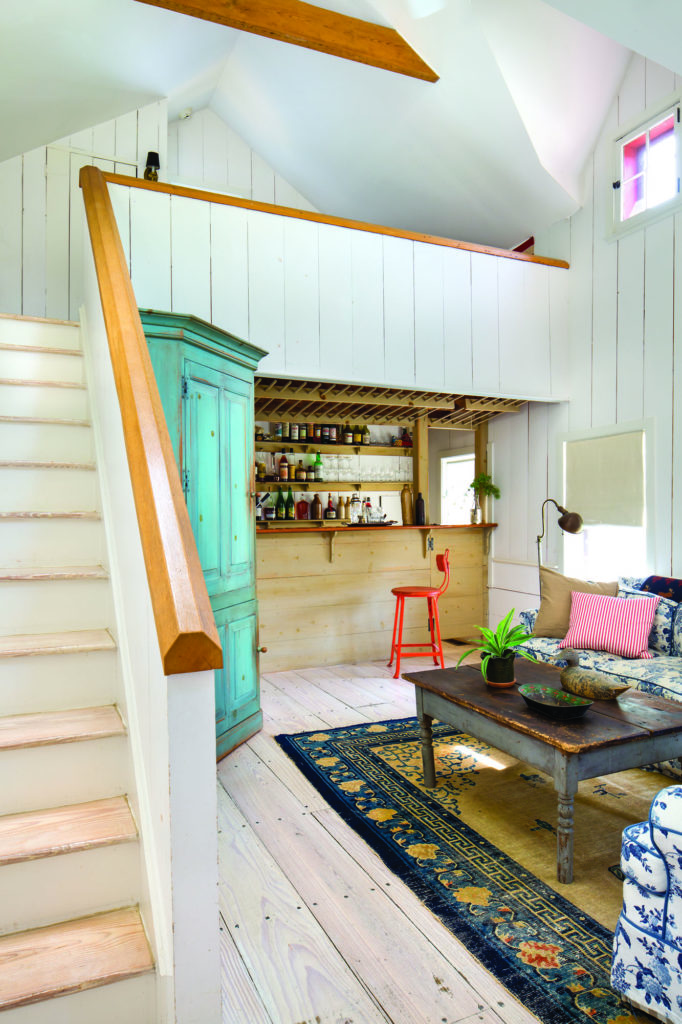 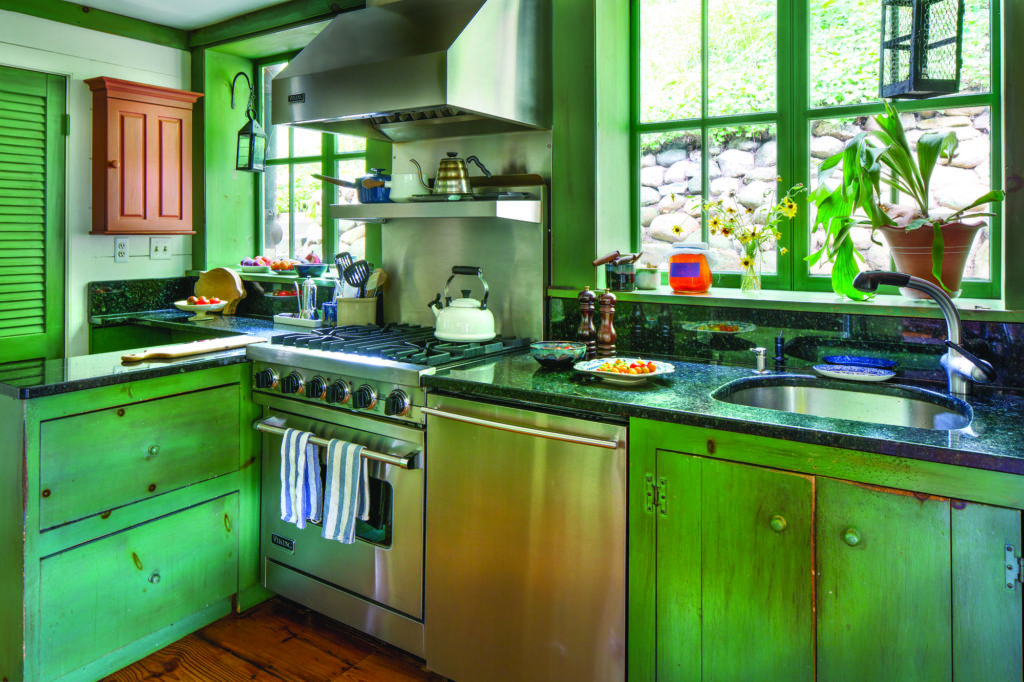 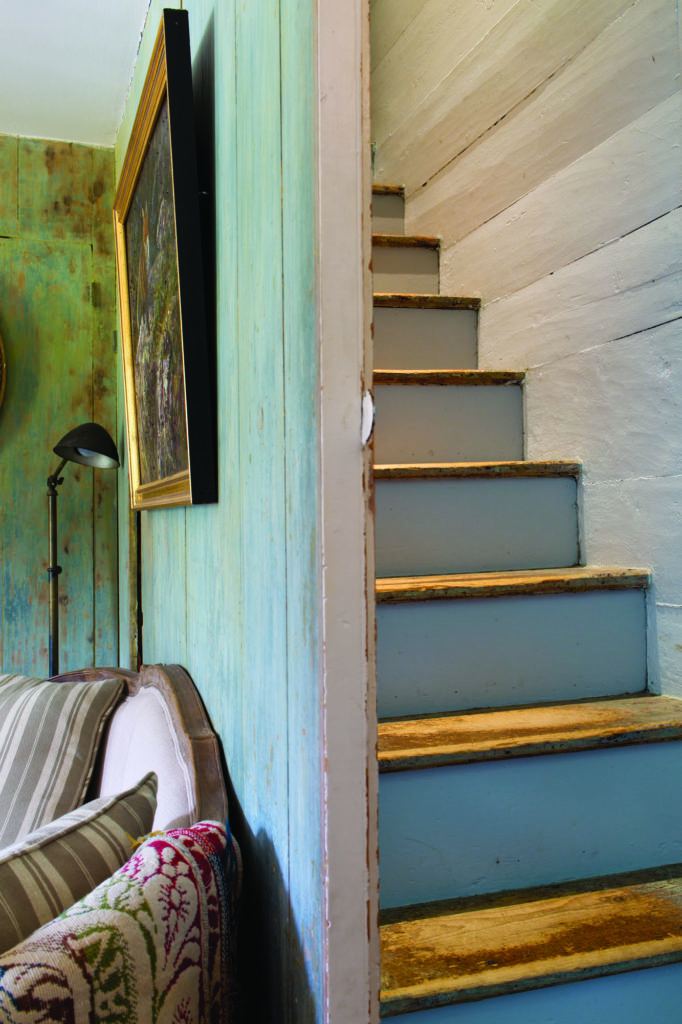 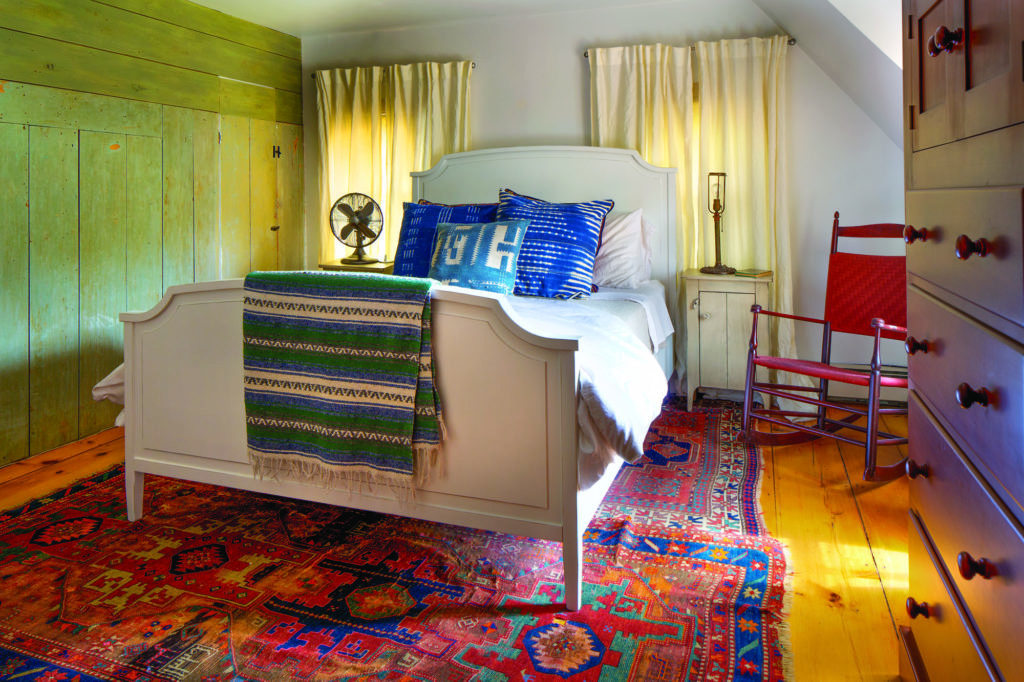 Three bedrooms occupy the second floor. The master bedroom’s board wall wears the same blue paint that remains on the south parlor’s walls downstairs. A previous owner had installed an old dry sink that now acts as a plumbed vanity; it, too, has its old paint, worn but intact.

The Longabardis have furnished the house with early American country furniture found at local garage sales and secondhand shops. “We love to buy locally,” Julie says, “and we look for pieces that have local connections.” Paintings join various furnishings bought on Etsy or at Pottery Barn.

The original carpenter’s shop has been connected to the house via a breezeway; the two-storey shop now serves as the living room. “I love the space,” Julie says.

Cider in the Root Cellar

A trap door in the porch floor opens to a hatch that leads to the original—and surviving— root cellar. Erik Longabardi was very happy to discover it.

“I collect wine and I make cider—the root cellar is the perfect temperature for brewing and storage, in both the summer and winter.”

Erik makes cider from apples he finds in the general neighborhood. “I look for old apple trees by the side of the road, and for old estates that once had orchards. I have a cider press and a grinder, and I let the juice naturally ferment. Sometimes there are crab apples in the mix.

“I’ve made sparkling and still cider. I put the cider in glass demijohns, then bottle and label it all by hand.” Erik is in the process of procuring a New York State license so that he can sell his cider.

The couple also intend to grow their own vegetables, and created a raised bed in the lawn. Elsewhere, greens didn’t do well on a shady hillside, so they’ll look for a new location next season.