Dreaming not of model trains and cowboys, but rather of room dividers and recessed lighting, a boy attracted to his grandparents’ 1959 Modern home, Jerry Morosco grew up to be a Taliesin apprentice, absorbing the tenets of 20th-century design genius Frank Lloyd Wright.

Afterwards he returned to his native Pittsburgh and settled in the South Side, once a thriving neighborhood of small businesses and tidy brick row houses built for Victorian steel workers and their families. After the ’60s the old neighborhood declined, its storefronts boarded up as families relocated to the suburbs. But Jerry was aware of urban renewal and the Back to the City movement, and opened his own architecture practice in the heart of Pittsburgh, in a historic former glassworks.

Soon he noticed the abandoned frame house for sale across the street. Vacant for several years, it was uninhabitable, filled with debris, windows broken, plaster walls and ceilings collapsing, its floors riddled with gaping holes. But the price was right ($5,000) and the location perfect. Jerry’s research revealed that the house was built as a four-room farmhouse in the 1840s, then floated by barge down the Monongahela River to its present site in 1875, after a fire had opened up a lot in this block of narrow brick townhouses.

An open floorplan makes the small house seem larger. Adjoining areas are unified by white-oak woodwork and hand-stained ochre plaster. An important Klismos dining-room ensemle is a centerpiece; the needlepoint rug is by the painter Tim Van Campen, for Michaelian & Kohlberg. 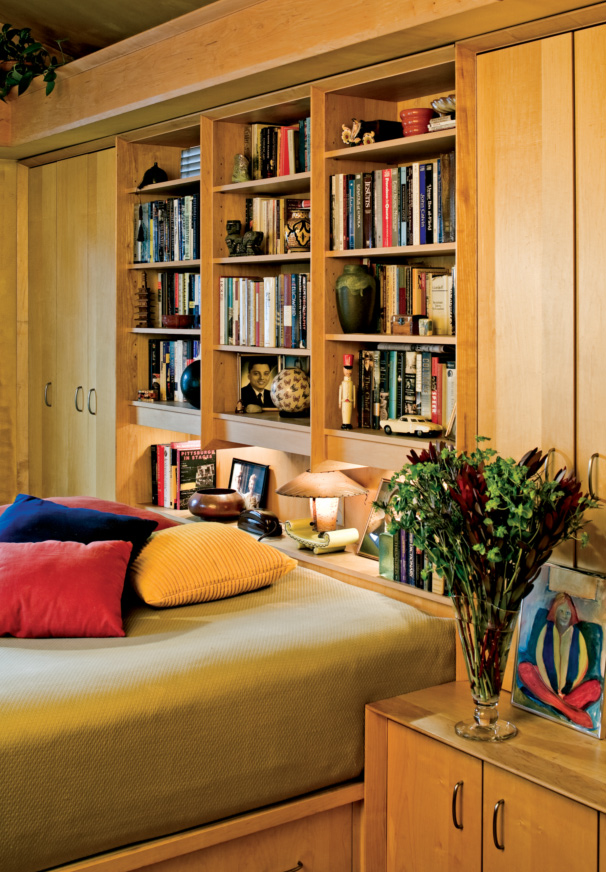 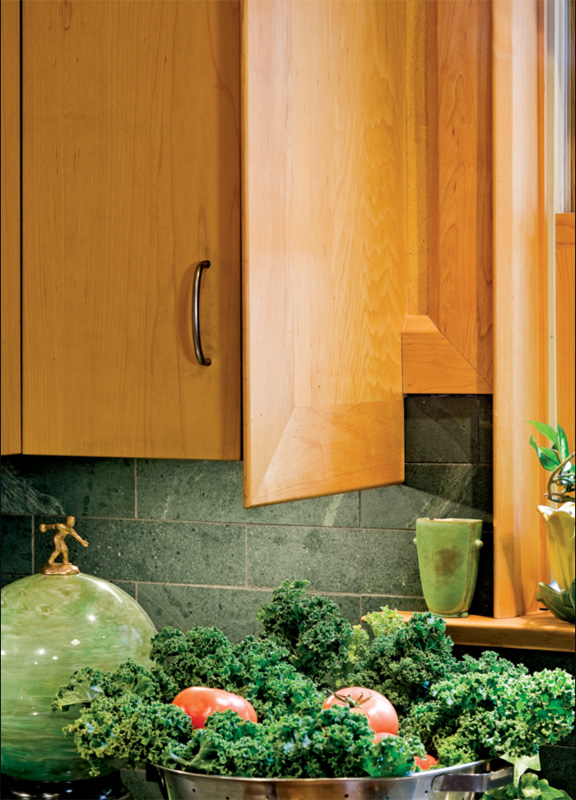 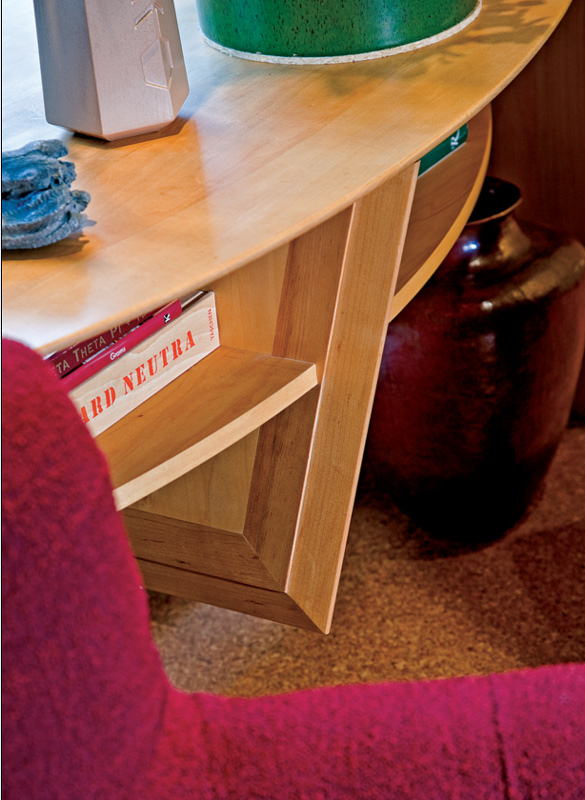 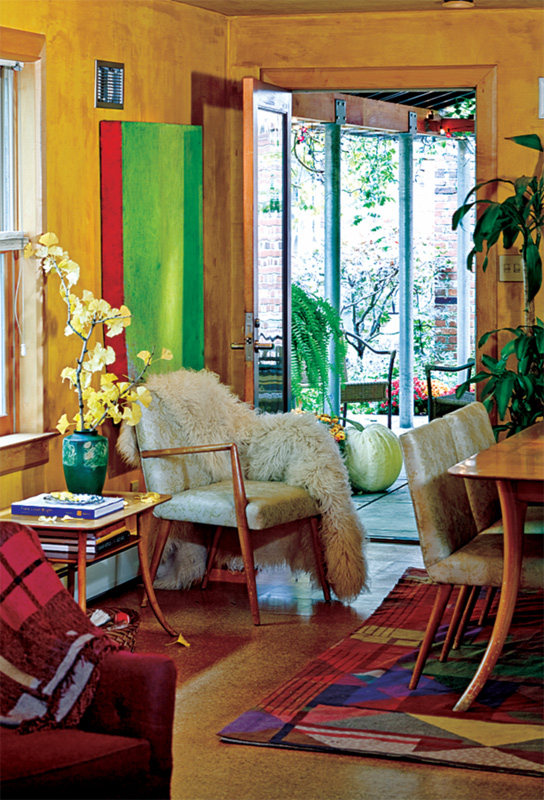 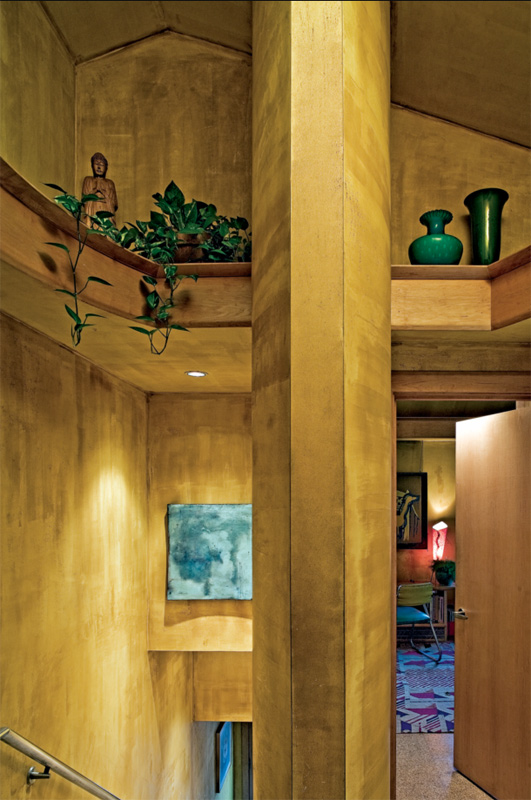 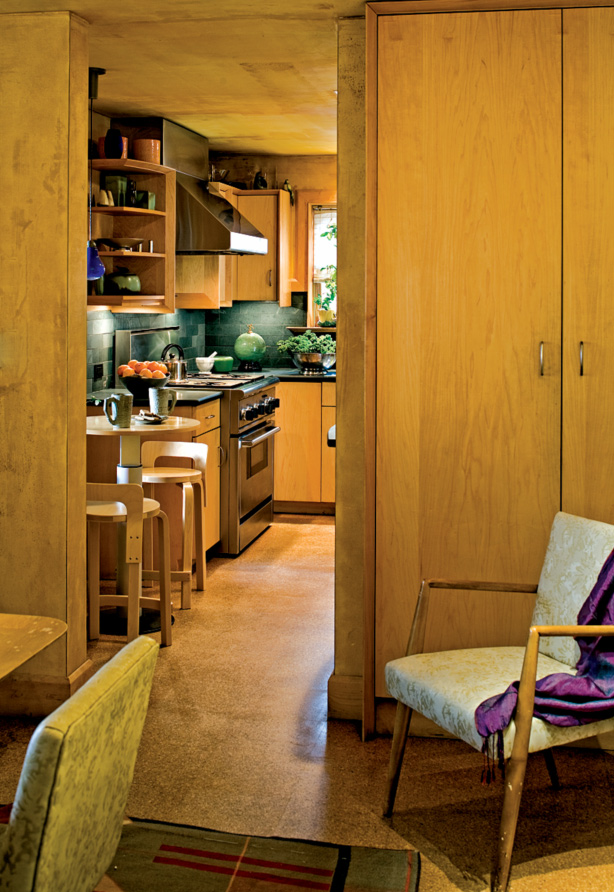 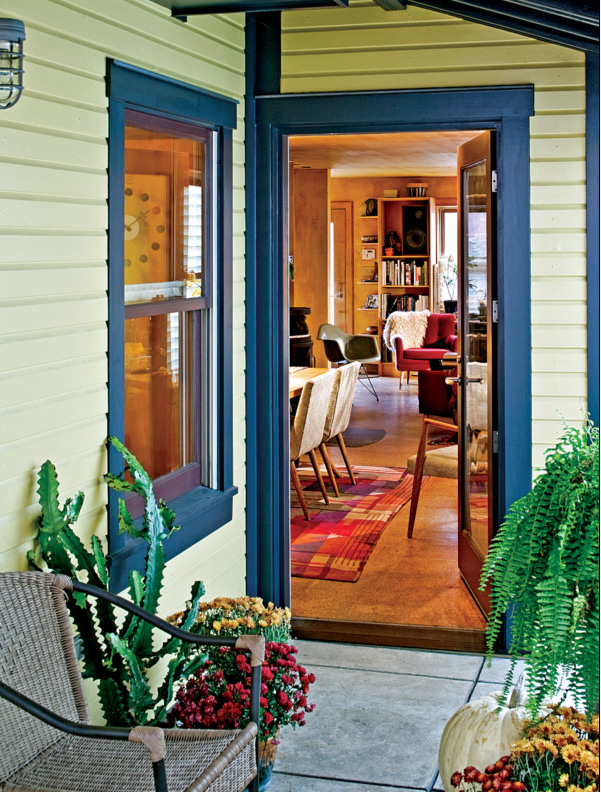 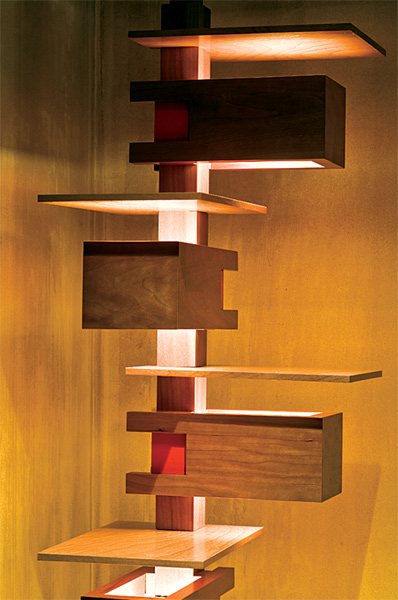 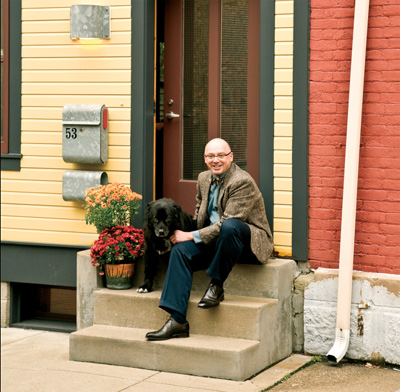 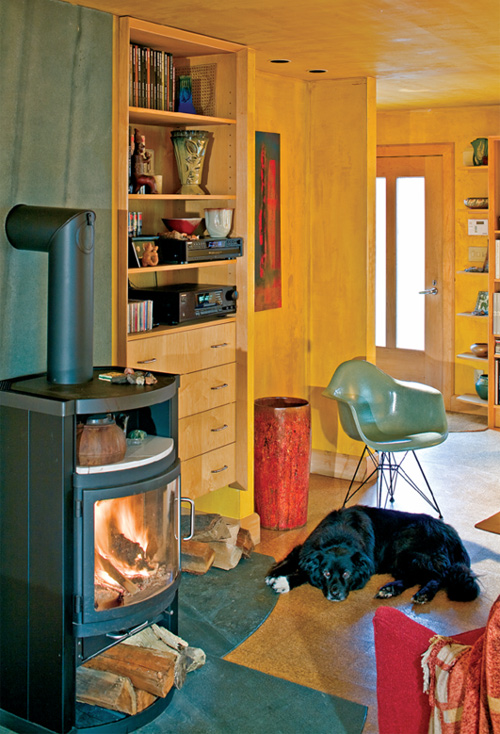 Just 16′ wide and 32′ deep (with a rear “tail” that includes a 14′ kitchen, added in 1875), the house proved to be a challenge. Trained in preservation and restoration, Jerry intended to salvage as much of the original as possible. But structural analysis revealed serious rot conditions and insect infestations throughout, involving even the 1840s timber framing and sills. He experimented with cables and pulleys in an attempt to stabilize the rotting framework, but realized the structure needed replacement. A torrential rain during reframing washed out a large part of the rubble-stone basement walls, nearly collapsing both this house and the neighbor’s, just 36” away. Beyond the footprint, the turned wooden spindle separating the two windows on the front façade was the single salvageable piece.

The main design challenge—one common to narrow row houses—was how to locate the stairs and bathrooms within the constraints of a very small floor plan. (Understand that the “bathroom” was originally a backyard privy.) Jerry took advantage of every square inch of space, creating a chase that runs perpendicular to the stairs from basement to attic, to allow code-compliant space for plumbing pipes, venting, and air-conditioning ducts. It made a compact “Ozzie and Harriet” second-floor bathroom possible, in a room just 6′ 8” square.

Sources of inspiration: Mexican pewter, ginkgo leaves, and the catalog from the Guggenheim on the work of Frank Lloyd Wright.

Having absorbed F.L. Wright’s teaching that the architect is responsible for the entire environment—architecture, landscape, and furnishings—Jerry rethought the interior of his home.

Mid-century Modern furniture by the famous decorator T. H. Robsjohn–Gibbings inspired the design and detailing of woodwork and built-in casework.

The graceful Grecian arc of the legs of a Klismos dining table and chairs inspired Jerry to use their curvilinear vocabulary as a guide for the profile of the baseboard and window and door casings.

Jerry carefully drew out furniture placement for each room, incorporating both inherited pieces, such as a ca. 1940 sofa and chair set upholstered in a nubby chenille from his great-grandmother, and a leather chair from his great-grandfather’s barber shop, along with mid-century Modern masterpieces that include a ca. 1952 drop-front secretary by Suzanne Guiguichon, an important T.H. Robsjohn–Gibbings buffet, and a Klismos dining table and chairs that are the centerpiece of the open dining room.

A ca. 1960 George Nelson wall clock keeps the time above the breakfast table, lit by a prototype “Ben” series Resolute Lighting pendant designed by Douglas Varey. The custom table is set with a pair of two K65 stools by Alvar Aalto.

Following Wright’s philosophy of celebrating the honesty of materials, floors are made of natural cork, finished simply with carnauba wax (they’ve held up well for more than a decade); the custom millwork, trim, and casework are white maple finished with Danish oil and carnauba wax.

Walls and ceilings are finished in a steel-troweled veneer plaster. Jerry decided to stain the plaster with an early recipe Wright used for projects such as his Unity Temple: equal portions of oil, beeswax, turpentine, and pigment. Morosco chose an ochre yellow inspired by ginkgo trees in the yard.

He used honed slabs of Kirkstone, quarried in the Lake District in Cumbria, England, for kitchen and bath countertops and backsplashes; the matte gray-green finish complements the sunny ochre walls and golden-brown cork floors.

An essential quality of Wright’s work was his ability to manipulate space, realizing that it is greater than just the walls and roof. The idea became Jerry’s mantra as well: By using continuous and homogeneous planes and natural materials, he made the narrow house appear much larger, each area opening into the next as if one were unfolding a careful piece of origami. Choice and placement of art and objects were also considered, as if that were the home’s final “seasoning.”

Jerry Morosco strives to remain true to his Taliesin training. He shares his home with appreciative partner Paul Ford and their Border collie-mix, Saverio.

Some people (like Jerry Morosco) know what they want to do from an early age. The Pittsburgh-based architect, who specializes in restoration, had no doubt that he’d be an architect. His grandparents’ 1959 house was the best of the period: open floor plan, blond oak woodwork, shuffleboard linoleum in the rec room. He loved it. With a bachelor’s degree under his belt, Jerry entered an apprenticeship at Taliesin, spending the next five years absorbing the genius of 20th-century architect Frank Lloyd Wright. Then Jerry went back to Pittsburgh to live and work.

“My appreciation for the value of a beautiful environment came to me by way of direct personal experience at Taliesin,” Morosco says. “I lived for five years in an incredibly rich [design] environment, and I learned my profession within the intentional community that is the Taliesin fellowship. It is sustained upon the idea that we should always strive to create beauty if we were to remain true to our profession as architects.”