When its current owners purchased the bungalow in a foreclosure sale in 1981, they got a house that hadn’t seen much alteration. Brick piers supported pyramidal wood porch columns that gave the unassuming street façade a Craftsman flavor. The interior of the 1926 house, with its plastered walls, archways between rooms, and plain but classical moldings, illustrated the historical revivalism of the period. A note of Art Deco sophistication sounded in the living room’s imposing fireplace, where plaster walls sweep to the ceiling. Batchelder tiles surrounded the hearth.

It’s no surprise that the owners chose to furnish the bungalow with period-inspired décor. Larry Kreisman, who has a master’s degree in architecture, made a career in historic preservation, curating museum exhibitions, authoring articles and books, and, for the past seven years, serving as the program director for Historic Seattle. His partner, Wayne Dodge, a family-practice physician, is similarly inclined. But what is unusual is their incorporation of Art Nouveau furnishings. 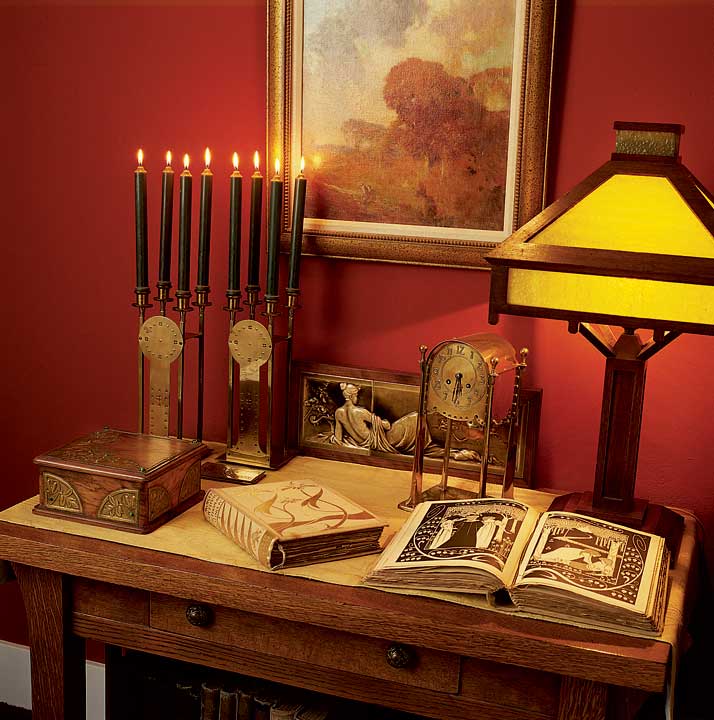 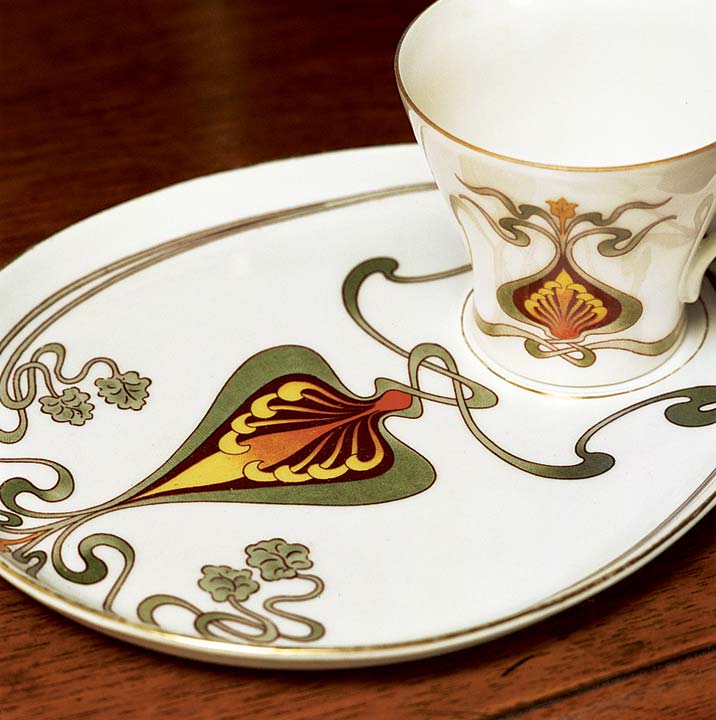 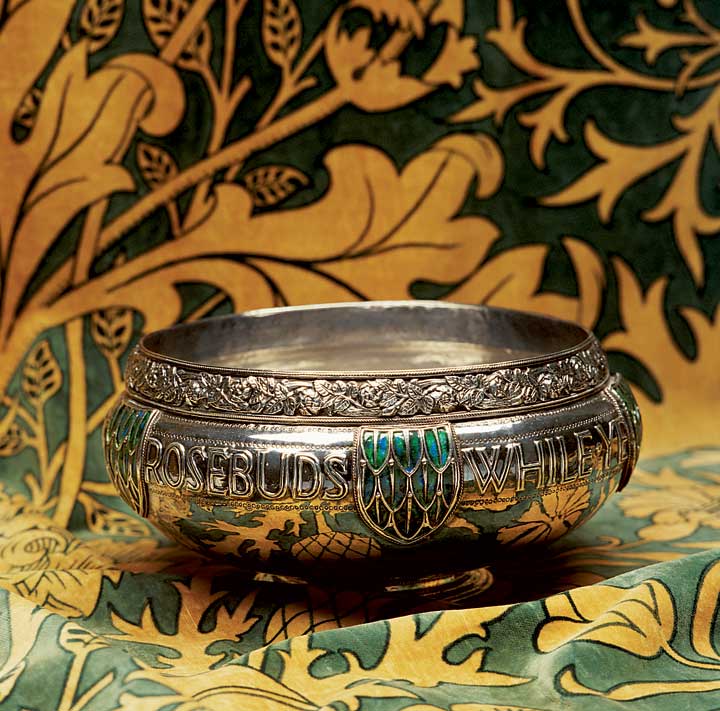 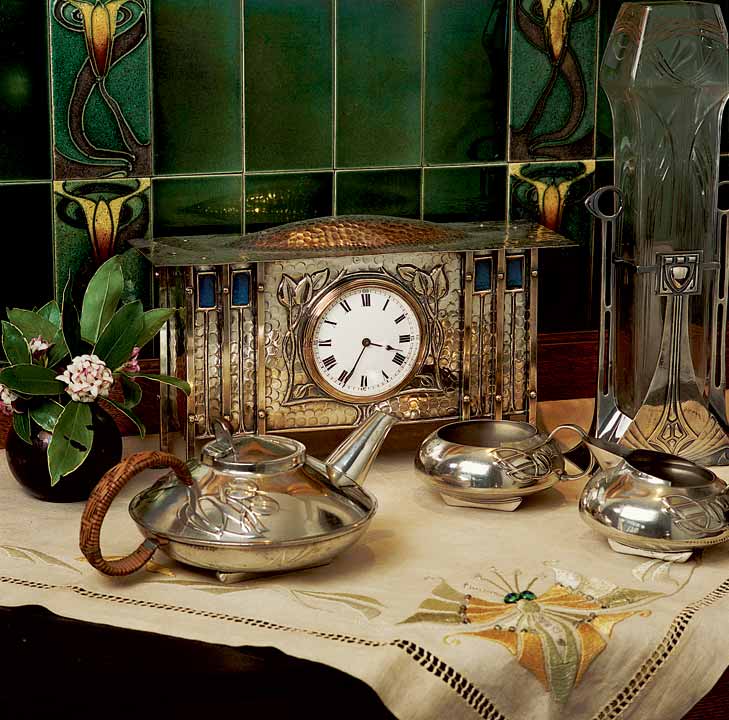 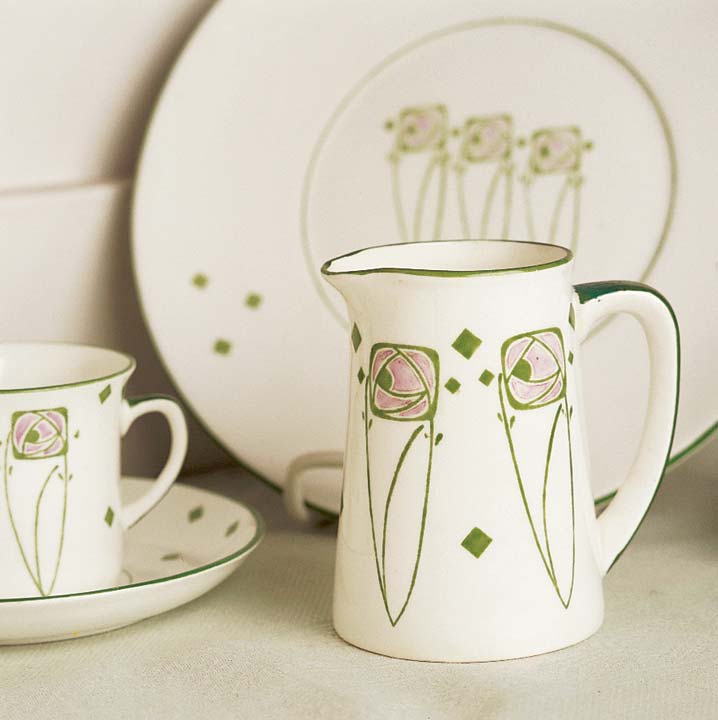 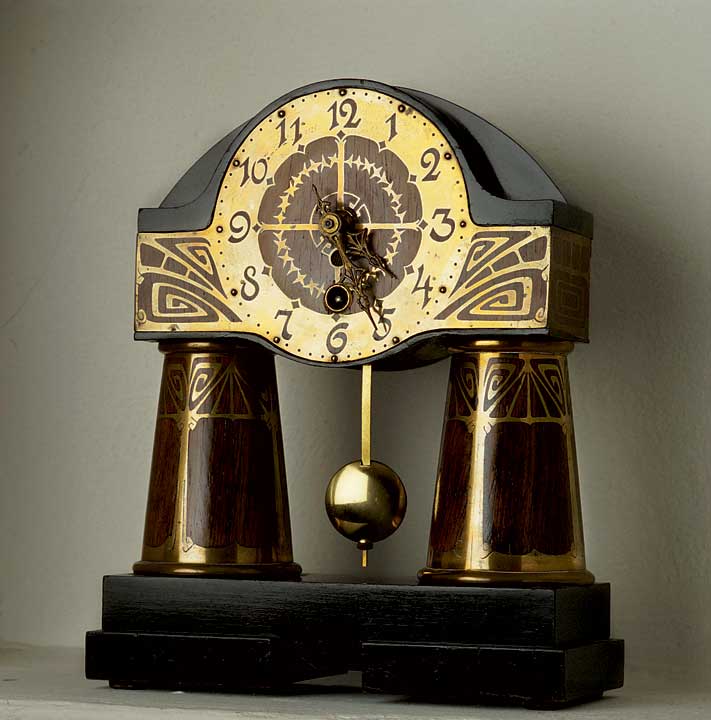 The dining room boasts a graceful, curvilinear walnut sideboard attributed to Majorelle. There is Secessionist silver flatware and vases. Kreisman and Dodge are fascinated by the Art Nouveau Movement, particularly its philosophy of design. They admire the flat, stylized decorations, the organically flowing lines—and the practice of paying the same kind of attention to detail in the design of everyday objects that had been reserved for painting and sculpture. They are attracted to not only the beauty of Art Nouveau objects, but also to the Movement’s progressive thinking.

It wasn’t long before the partners began searching out examples. They bought rare first editions by Aubrey Beardsley, with illustrations that are still shockingly modern. They have found elegant and stylized chinaware decorated with a Glasgow rose motif inspired by Charles Rennie Mackintosh. Their collection includes objects from France, England, Germany, Austria, and the U.S. The exquisite workmanship and sinuous lines of ceramic, metal, and glass objets d’art are showcased against a sturdy and straightforward backdrop of English and American Arts & Crafts furniture.

Years ago, restoration of the house began in the daylight basement,which was turned into a light-filled master suite. A striking set of four ca. 1910 Art Nouveau leaded and stained glass doors, said to be from the social hall of a razed church, was discovered at a local estate sale. That purchase provided the impetus for remodeling the kitchen at the rear of the house; the glass doors opened up the formerly dark, cramped cooking area. The partners painted the living room a warm and earthy terra cotta accented with white trim, and the dining room a soft gray.

Larry Kreisman and Wayne Dodge started to plan trips around antiques shows and museum exhibitions, traveling to London, Paris, Prague, Brussels, and Vienna as they expanded their knowledge of Art Nouveau and related designs. The spoils of their forays began to accumulate. A pewter tea service by Archibald Knox found an appropriate spot in the dining room; on a Jugendstil cloth, their table was set with stylized Secessionist stemware from Austria and Germany. A brass inlaid German mantel clock, ca. 1910, fit perfectly in the niche above the fireplace. Kreisman began collecting china settings as well: his more than 600 pieces of china range from his mother’s 1935 Aynsley wedding set to handpainted Arts & Crafts patterns of the early 20th century. A sinuous brass chandelier with glass-pipe pendants, which was originally in the ballroom of a Seattle mansion that is now the Japanese Consulate, was installed over the dining table.

Even the bedrooms have become repositories for the growing collection. The guest bedroom is furnished with an elegant 1904 Glasgow-style suite by the Luce Furniture Company of Grand Rapids, Michigan. Intricate, stylized floral inlays of brass, copper, ebony, and satinwood suggest designs executed by Harvey Ellis for Gustav Stickley during the same period. Recently Kreisman and Dodge enclosed their garage, transforming it into much-needed library “stacks.” With over 2600 volumes on architecture and the decorative arts, including many rare books and catalogs, they have built a serious reference library that has informed their historical knowledge and expertise.

Collecting with increasingly sophisticated eyes, Larry and Wayne continue to build their collection of “the New Art.” It was a style in vogue only until the outbreak of the First World War, yet one that continues to exert an influence on the decorative arts.