For three years, the 1920 stucco bungalow sat empty, home to only rats and grasshoppers and completely shrouded from view by towering pines. But when newlyweds Tim and Paula Schmitt spotted the “for sale” sign on the Evanston, Illinois, house, located just three blocks from Lake Michigan, they were thrilled. Never mind the decades of neglect; the yellowed, stained walls and ceilings; the brown shag carpeting and flamingo-pink kitchen; and the unmistakable odor of pet urine.

We wanted to find a diamond in the rough, something that needed to be shined up,” Paula says. “When we walked in, right away it felt like there was good integrity to the house. Then it became sort of a fantasy—what could it become?” After house-hunting for a year in the pricey Chicago-area market, the first-time homeowners were relieved to snag a house that cost roughly half of others in the neighborhood. “Our budget wasn’t going to allow anything exorbitant,” Paula says. 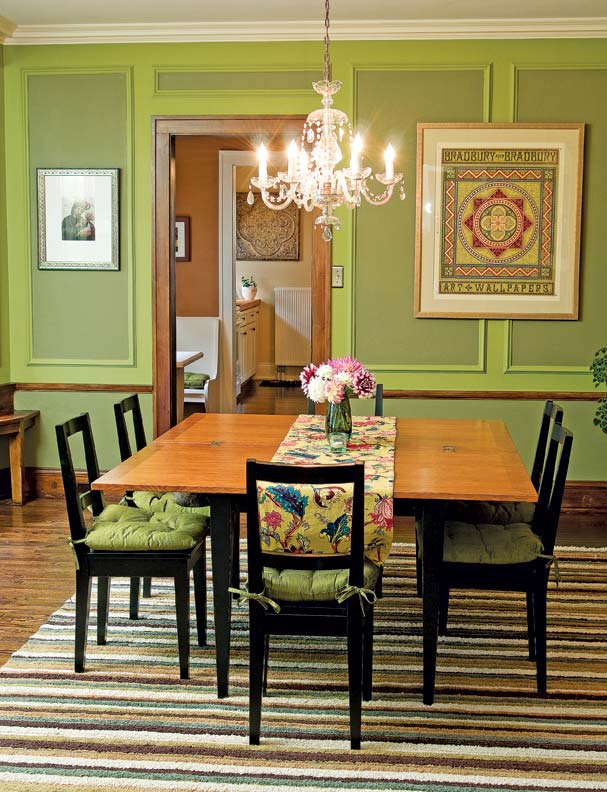 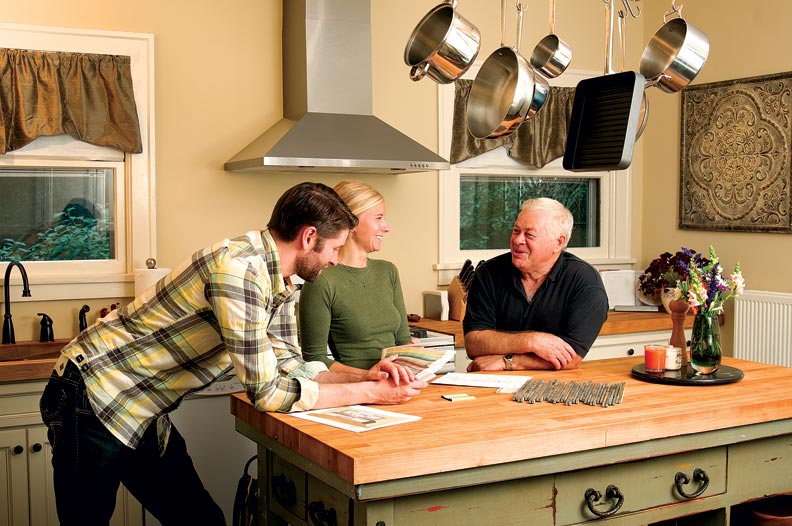 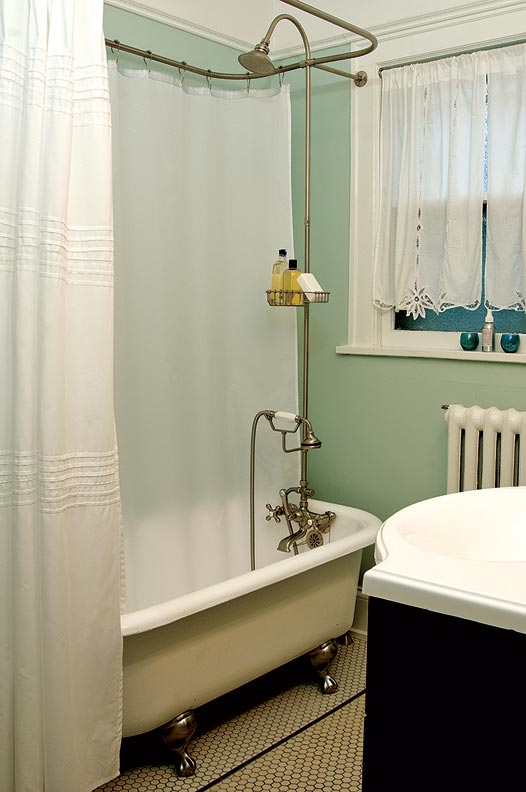 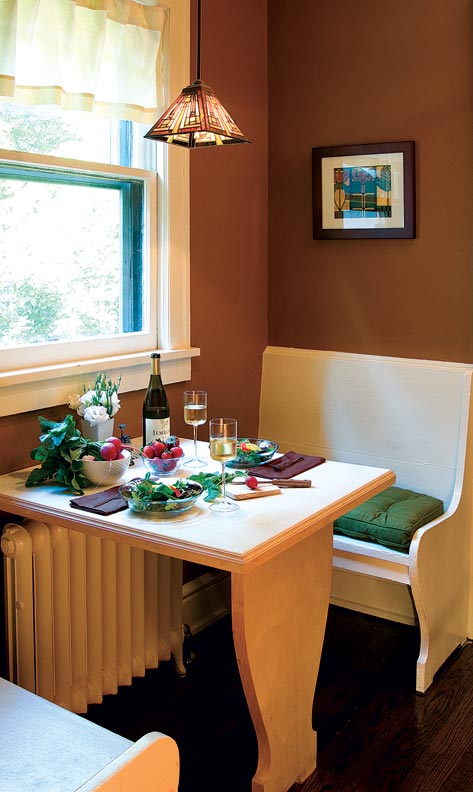 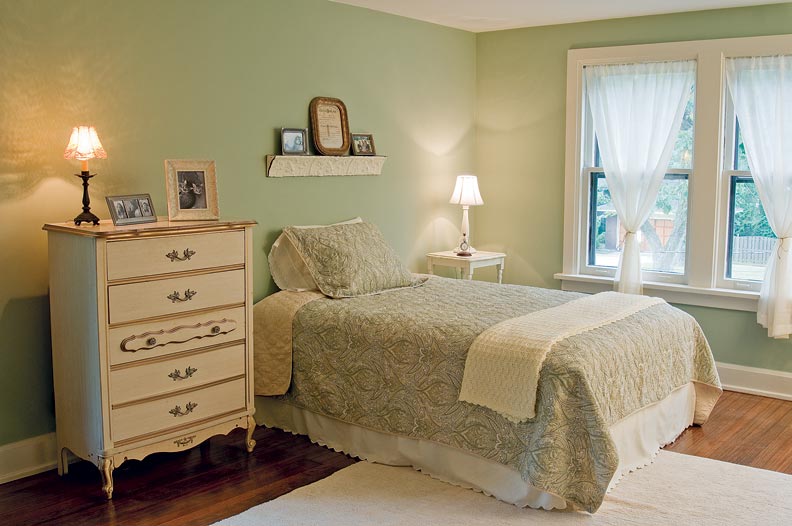 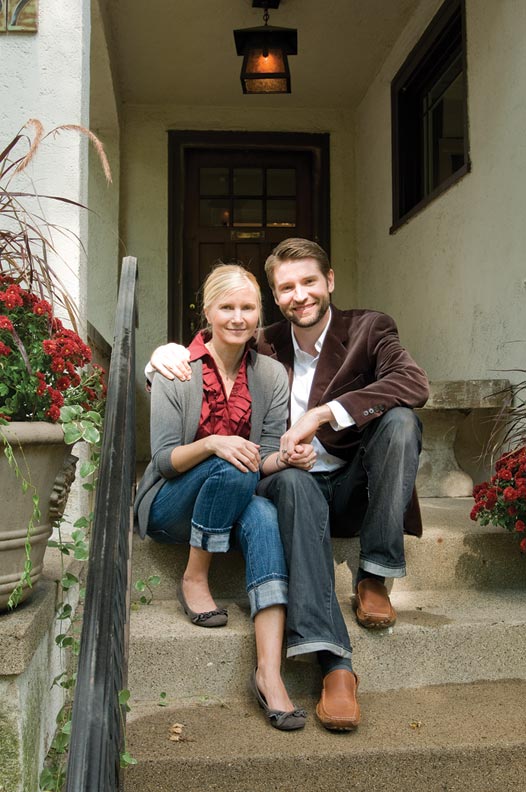 Fortunately, the five-bedroom, two-bathroom house turned out to be a true gem. Soon after purchasing the home in September 2010, Paula and Tim discovered it was an official Evanston landmark. The Evanston History Center files note that “this house is an excellent representative of a bungalow, but its elements taken from the Craftsman and the Prairie styles provide it with a claim to special attention.”

Paula, a graphic designer, and Tim, a fifth-generation bakery owner, quickly learned they had inherited the mysterious house on the block. Neighbors gaped from the sidewalk while four overgrown pines were removed, revealing the home’s exterior for the first time in decades. They also cleared three 80′ pines that had swallowed the small backyard. Paula and Tim hated to cut down the trees, but they weren’t appropriate for the lot. A mess of weedy vines and an ugly chain-link fence also had to go.

Soon, the 2,200-square-foot interior was flooded with light. They also removed an unsightly aluminum screen door and splurged on a new porch light—a handcrafted, amber mica reproduction of a 1905 Arts & Crafts-style lantern. “We wanted the house to look alive again,” Paula says.

Armed with a stack of bungalow books for inspiration and $1,500 in Home Depot gift cards they’d amassed through credit card points, they turned their attention to the inside of the house. They spent more than four months in a mad dash of renovations, trying to get the house into livable shape while they stayed with Tim’s parents. “Once we got into the project and we realized the scale of it, I think we got a little nervous,” Tim says.

Initially, they thought they’d move in by Thanksgiving. But then came Christmas. And then New Year’s. Without a general contractor, “we learned by doing,” Paula says, “and sometimes doing wrong.”

A measuring mishap in the kitchen meant that the sink was 3″ from being perfectly centered under the kitchen window, also throwing off the alignment of the range and range hood. Fixing it cost them nearly $700 and another month’s delay. Another setback came when they discovered too late that their newly refinished floors weren’t as dark as they’d hoped, forcing them to resand and restain the hardwood.

They first called in experts to tackle asbestos on the basement’s pipes and in floor tiles in the basement and back porch, then hired pros to update the electrical and plumbing. Although their tight timeline motivated them to hire help where they could, Paula and Tim tried to cut costs by performing several projects themselves. For example, when they learned that the water heater’s flue would need to be relined—a $2,000 job—their chimney crew suggested rerouting it to the boiler’s flue. Tim was able to do it himself, saving on the expensive repair.

The infrastructure work led to a serendipitous discovery by electrician James Ratajczyk, who was hired to rewire the house. During his initial walk-through, Ratajczyk noticed that the living room’s plaster had several areas that changed slightly in texture. Hidden beneath were five old electrical boxes, which Tim and Paula used to install inexpensive Prairie-style sconces.

The electrical boxes weren’t the only things waiting to be revealed. “There were all these layers,” Tim says. “We tried to get it down to more of a clean slate without destroying the style of the home.”

The hardwood floors, for instance, were covered with a patchwork of brown shag, linoleum, and tile. Tim easily tore up the carpeting, whose padding had long stopped adhering to the floor. Prying up the linoleum and tile took crowbars, a chemical stripper, scrapers, and a lot of elbow grease.

The one room with exposed hardwood presented its own challenge: When they peeled back the dining room rug, they found Chicago newspapers from the 1940s shellacked to the hardwood floor, a relic of the previous owners’ incontinent dog. “It looked like a collage,” Paula says. “If it didn’t smell really rank and awful, it’d be something you’d cut out and save.”

They were forced to replace the dining room floor, but were able to restore the oak and pine hardwood throughout the rest of the house. They chose a dark walnut stain and restained the dining room’s French doors and window seat to match the richer shade of the floors. “I think the dark, continuous hardwood floors make the house look larger and the rooms more grand,” Paula says. “The darker color also helped hide some areas that had been stained over the years in a few of the bedrooms.”

Some projects turned out to be more complicated than expected. In the first-floor bathroom, for instance, they needed to replace the broken toilet and didn’t realize that their 12″ rough-in energy-efficient model wouldn’t fit until an emphatic contractor schooled them. So Paula began a city-wide quest for a 14″ rough-in toilet, which she finally found at a small local plumbing shop.

They also refinished a clawfoot tub that was too big for the second-story bathroom and relocated it to the main bath. “I love bathrooms with a clawfoot tub,” Paula says. They hired a contractor to grind off the tub’s layers of paint and reglaze it, then had an antique hardware store replate the claw feet in brushed nickel.

Under the bathroom’s yellowed linoleum, they discovered the original 1″ hexagonal white mosaic tile, and spent a full day scrubbing away the cement-like goo that had secured the linoleum. But when they ordered hexagonal tiles to fill in an area around the new tub, they learned that today’s 1″ tiles are only 7/8″. “There wasn’t going to be a good way to blend the new tiles with the old,” Paula says. So instead, they outlined the area in black pencil tile to make it look intentional.

The kitchen was another big project. “It was a glow of pink,” Paula says, referring to the hue that covered the walls and cabinets. They spent hours stripping five layers of paint and were able to preserve most of the original built-in cabinetry, though they tweaked the layout to create more counter space and accommodate their appliances.

They also replaced the wall of laminate cabinets added by the previous homeowners with simple, affordable cabinets with recessed front panels to match the built-ins. To help them blend even more, carpenter Mykola Rudyy added trim and repurposed an unused cabinet door as the side panel. “He is really the guy who made this come to life,” Paula says. “He was really good at integrating the new cabinets. He did such a nice job of making them look like they’ve always been there.”

They turned a flea-market find into a cost-effective center island, painting it a mossy green and topping it with butcher block reclaimed from the family bakery. A new copper under-mount sink and antique copper faucet finish the west-facing wall of the kitchen.

In the breakfast nook, Tim and Paula removed a ’50s-style Formica table and had their carpenter fashion a table to match the design of the built-in benches, using a Corian countertop also reclaimed from the family’s bakery. They hope to eventually add Arts & Crafts-style wallpaper to the nook.

The bedrooms were easily transformed with refinished floors and freshly painted walls, though the ceilings were so dingy they took four coats of paint. The couple also repaired decaying plaster on the walls and crown moldings throughout the house.

The windows were in bad shape, too. “We love the original double-hung and casement windows in the house, but they have accounted for hours of work,” Paula says. “The pros fixed broken panes and ropes. Tim pretty much did the rest.” In addition to cleaning years of accumulated filth, he removed and repaired disintegrating screens, scraped peeling paint, and sealed loose panes.

There are still plenty of projects left on Paula and Tim’s to-do list. The upstairs bathroom, which had a rotting floor, remains gutted, though they did find a second clawfoot tub on Craigslist that they plan to refinish.

“We’re a real working couple with a real budget,” Paula says. “We don’t have endlessly deep pockets.” So, they’re pacing themselves. Eventually they hope to improve the insulation, add an upstairs den, replace the garage roof, repaint the exterior trim, and landscape the yard. But at this point, they’re content to enjoy all the progress they’ve already made.

“We’re so happy to be here,” Tim says. “We love to be home, and everything we do is just icing on the cake.”