The town of Essex, New York, is as pretty as a picture. Perched on the shores of Lake Champlain, the Adirondack Mountains its backdrop, Essex is the terminus for the ferry that crosses Lake Champlain from Charlotte, Vermont, to New York. Boasting a beguiling collection of historic houses and quaint shops and cafés, Essex is included, in its entirety, on the National Register of Historic Places, making it a favored destination for history-minded travelers.

The first European settler was an Irishman named William Gilliland, who came here in the spring of 1765. His daughter Elizabeth married Daniel Ross; originally, this settlement was called Elizabeth, after her. In 1822, their descendant William Daniel Ross built a handsome brick house in the center of town. The Ross Mansion eventually got the name Rosslyn.

“There are four original houses in town, and each has a name,” explains Susan who, with husband George, became Rosslyn’s proud new owner in 2006. “Lined up along what we call Merchant’s Row, they are the Dower House, Sunnyside, Greystone, and Rosslyn.”

Like many owners of important old houses, this couple never intended to become stewards of a 2½-storey neoclassical manse that spreads over more than 6,000 square feet. The building was originally just a three-bay, side-hall dwelling, but Rosslyn was expanded between 1835 and 1840 into its symmetrical five-bay configuration. Other buildings on the grounds include several barns and a very adorable, Eastlake-style boathouse added in 1898. The house has a spectacular view of Lake Champlain and of the Green Mountains across in Vermont.

“We lived in New York City, and came up to this area on weekends and vacations,” Susans says. “We’d fantasize about having a place of our own to fix up. Then we saw this house, and fell for it in a big way.” It was too big, and too much work, of course. “We couldn’t figure out how to buy it until we had the aha moment,” Susan recalls. She and George realized they could have Rosslyn only if they made Essex their full-time home.

Susan had just graduated from design school and the couple were newly married. “I really didn’t want to work 12-hour days in the city,” she says. George adds that he’d just gotten involved with working online. He figured his base could be anywhere with an Internet connection. So the two bought Rosslyn—or adopted her—and their plans shifted beyond their imagining.

“Our decision launched a very big project,” George explains. The house still needed a lot of attention, including replication of some of its woodwork, and “the boathouse was just one ice floe away from the grave.” Susan remembers that, at one point, 100 people were involved with restoring the house. The bulk of the project took three and a half years.

A significant rear wing had been added to Rosslyn in the 19th century for domestic services—a kitchen and pantry, etc.—and servants’ quarters. Early in the 20th century, when the house became a hostelry called The Sherwood Inn, that service wing was renovated to accommodate guest lodging, a restaurant, and a tavern. When the inn ceased operation by the early 1960s, most of the rear wing was removed.

George and Susan used its remnant to create a large new family room. For symmetry and better flow, they also added two new wings, one to house a screened porch and one to create circulation between old rooms and new. The boathouse, of course, was a later addition, but its late Victorian style is so charming, they never considered removing it. It has been restored inside and out.

The couple also created two bedrooms in the third-floor attic and removed a later wall in the dining room to restore the original floor plan. All along, they endeavored to preserve good old work throughout the house. “An arch-top built-in in the green parlor was probably not original,” Susan speculates. “But it had become an integral part of the house, so it stayed. We added many traditional built-ins ourselves.”

Susan’s design education stood her in good stead when it came time to decorate. “We did not want a period interior,” she says. “because we did not want the rooms to feel museum-like. Also, we are both tall, so antique furniture is often too small for us.”

She chose classic, uncomplicated pieces that include contemporary upholstered furniture as well as a few antique and reproduction pieces collected on trips abroad. “I did realize that it would be important to have window treatments,” Susan explains. “This is a very public house: you can see in as you drive past.”

The saturated green of the parlor walls was already here. “As we worked, I decided that I like it, it suits the house,” Susan says. For the dining room, she chose a gentle blue color that reminded her husband of a room in Paris (Benjamin Moore ‘Wedgewood Gray’, HC-146). And “we used the same white for the trim throughout,” she says. “There are so many sections of the house, built in so many different eras, that it made sense to use one trim color to tie it all together.”

The front of the house is historic, but the rear had undergone numerous additions and subtractions over the years. George and Susan updated the rear with sensitive additions and a patio surrounded by a stone wall. George rebuilt the old stone walls that surround the property. They built a new fence, basing its design on one found in a Federal pattern book.

George and Susan are eager to praise Rosslyn’s previous owner: “He did 37 years’ worth of research that we relied on.” His drawings became the basis for much of the restoration.

“We were surprised by how many people in the community have opinions about the house,” George says. “Remember, at one time it was an inn. A lot of locals got married here, and they came here to eat and drink. In that spirit, we do a lot of entertaining.” 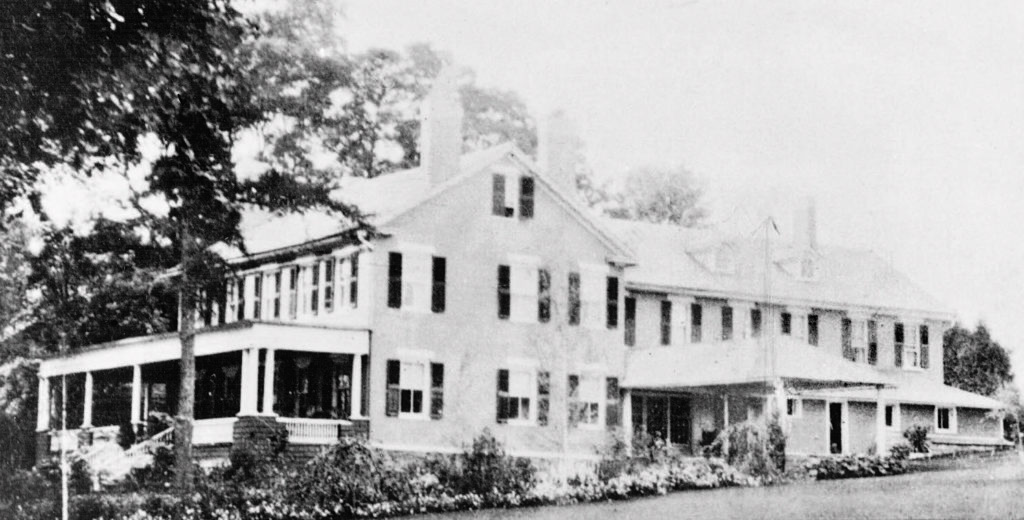 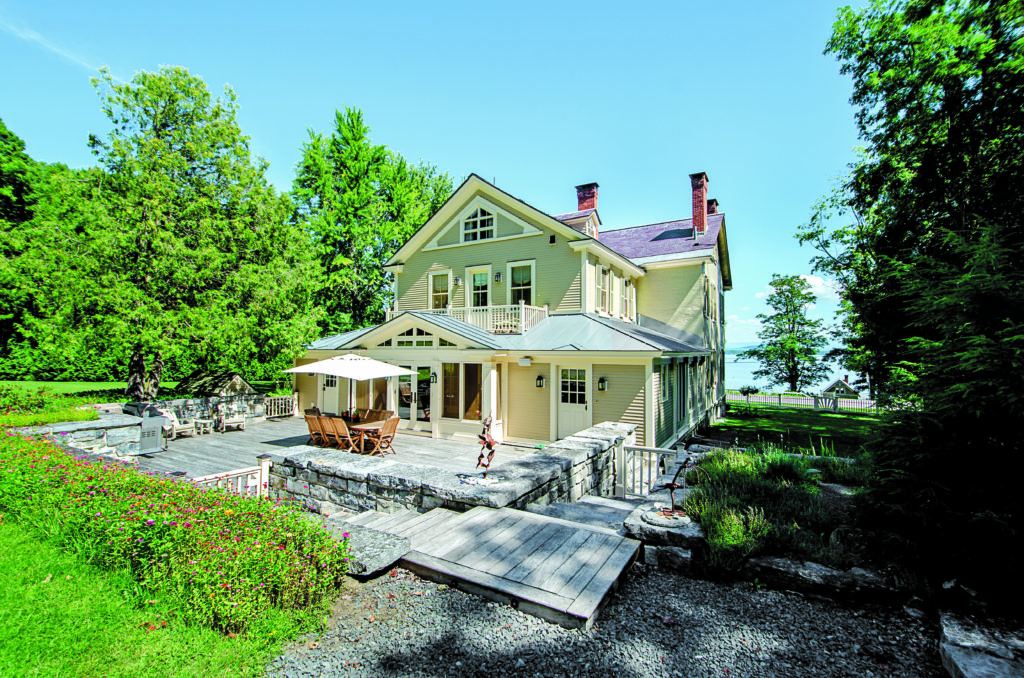 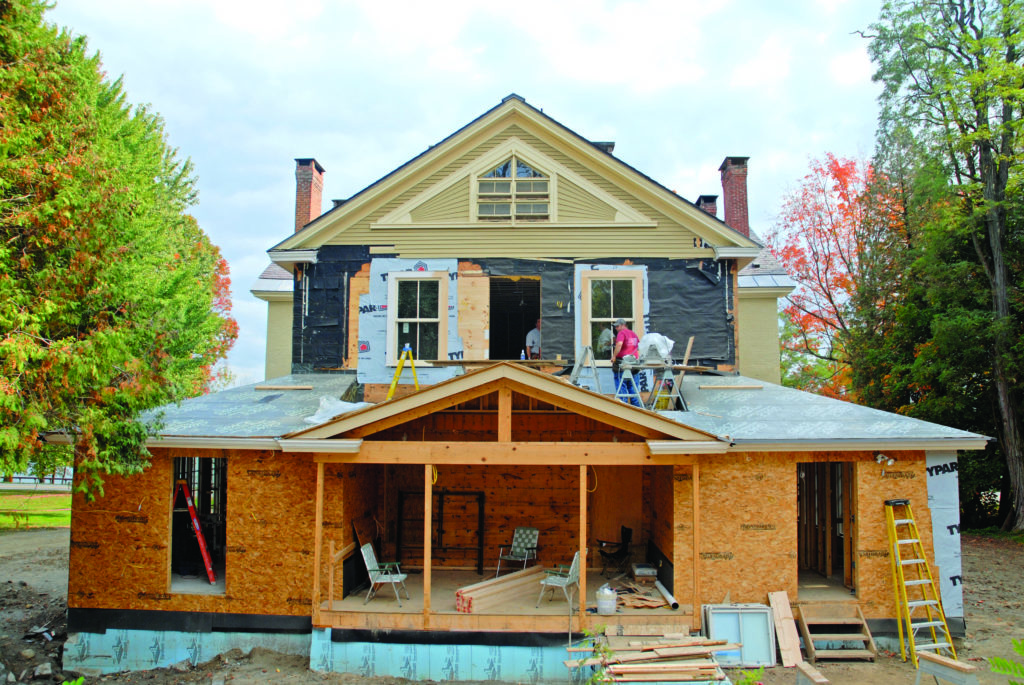 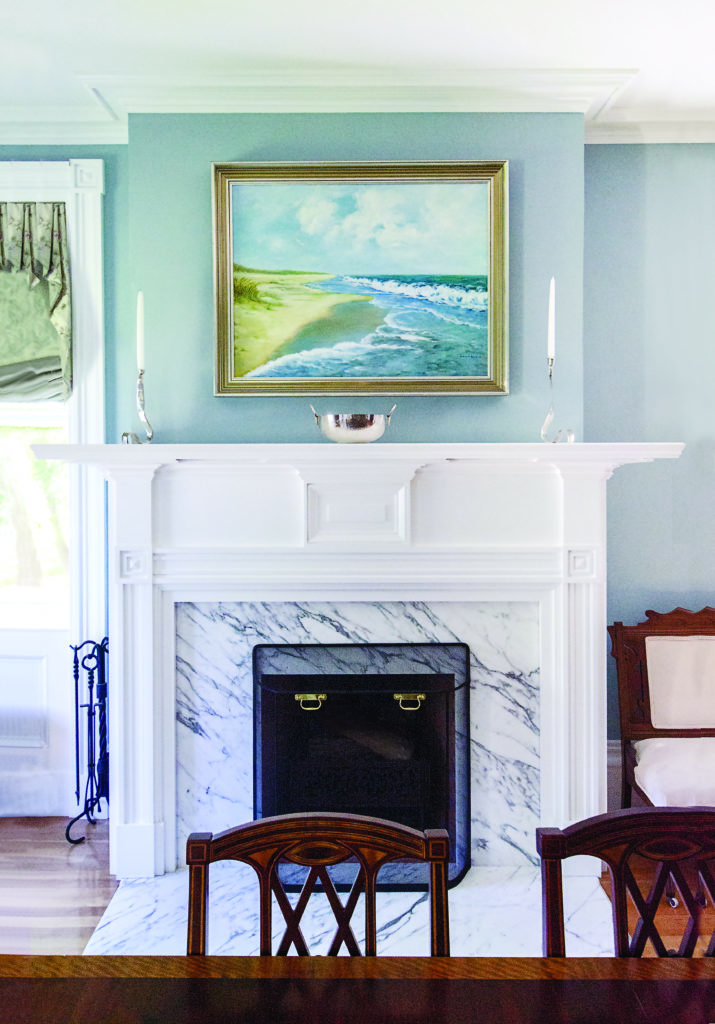 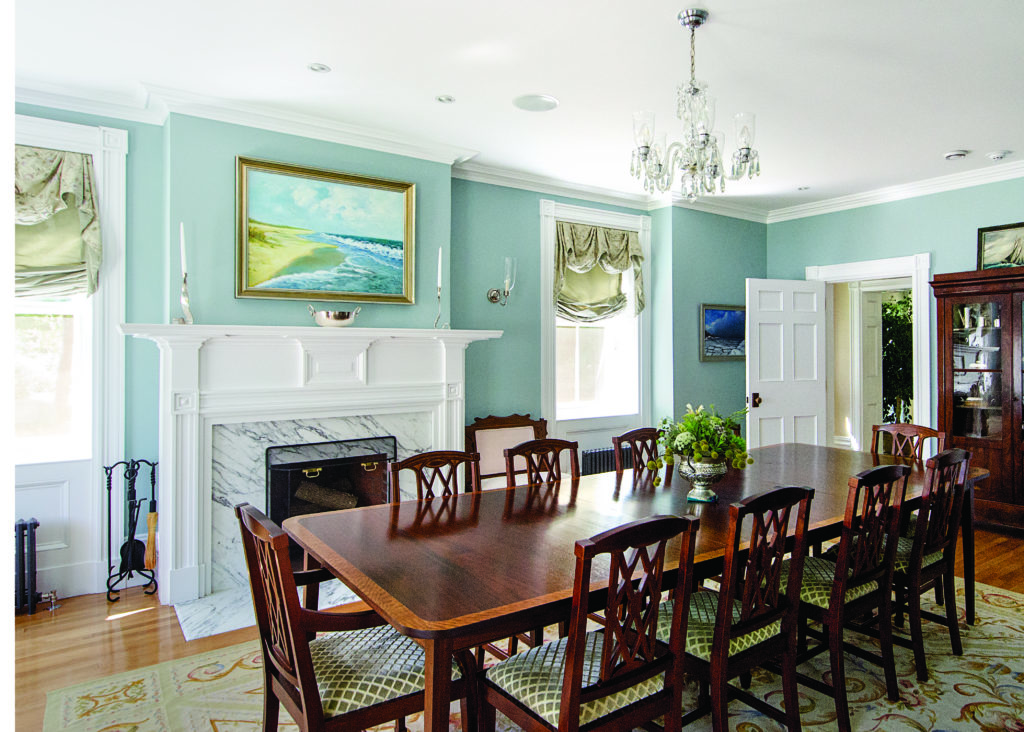 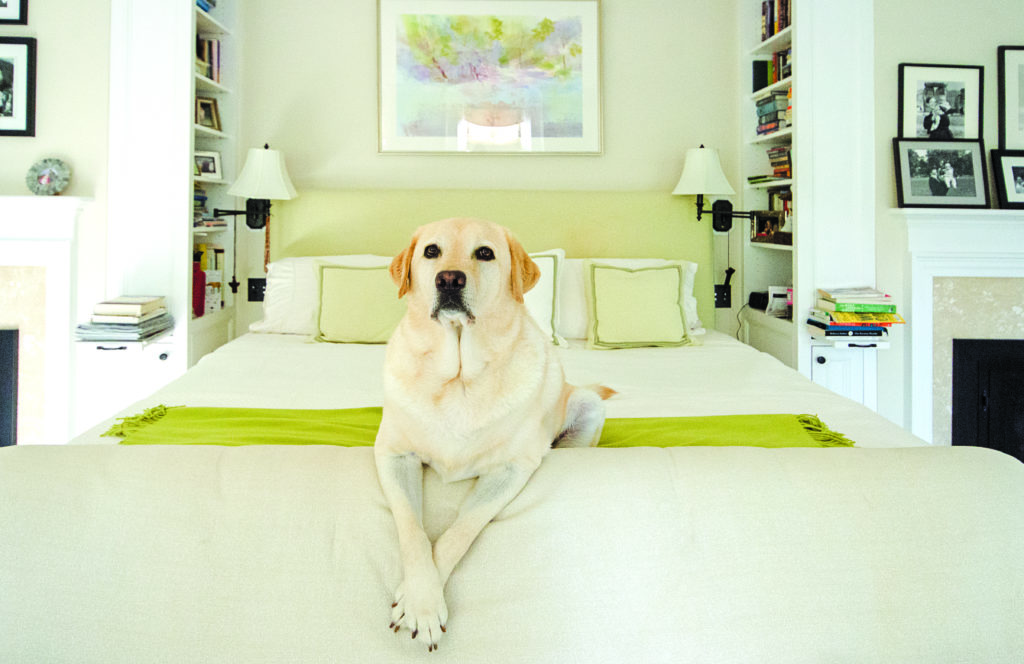 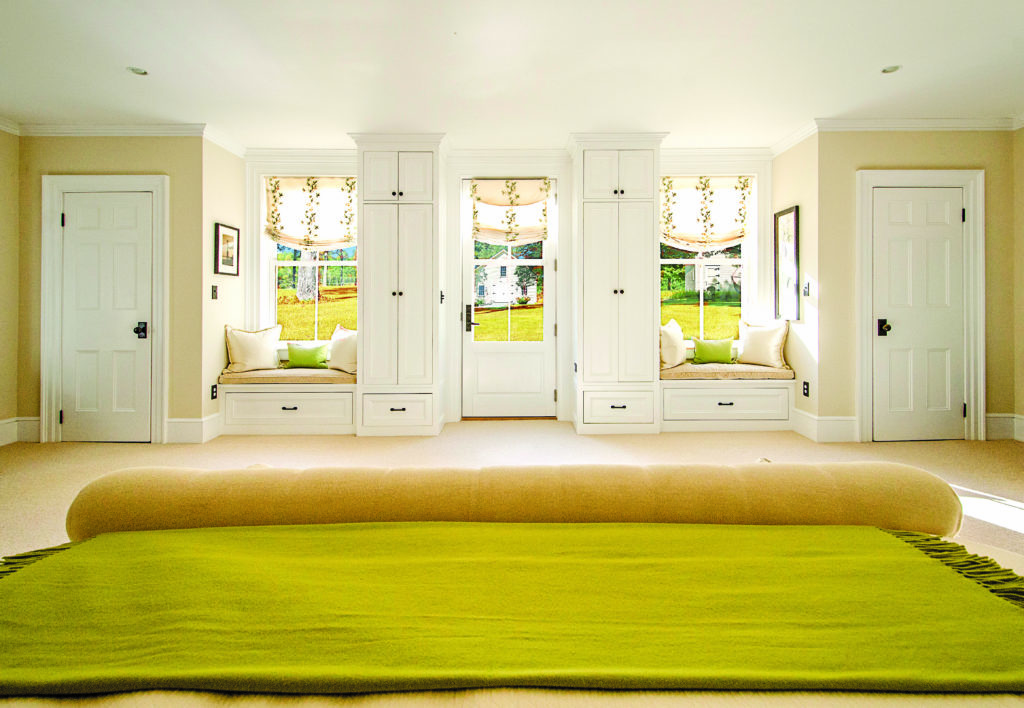 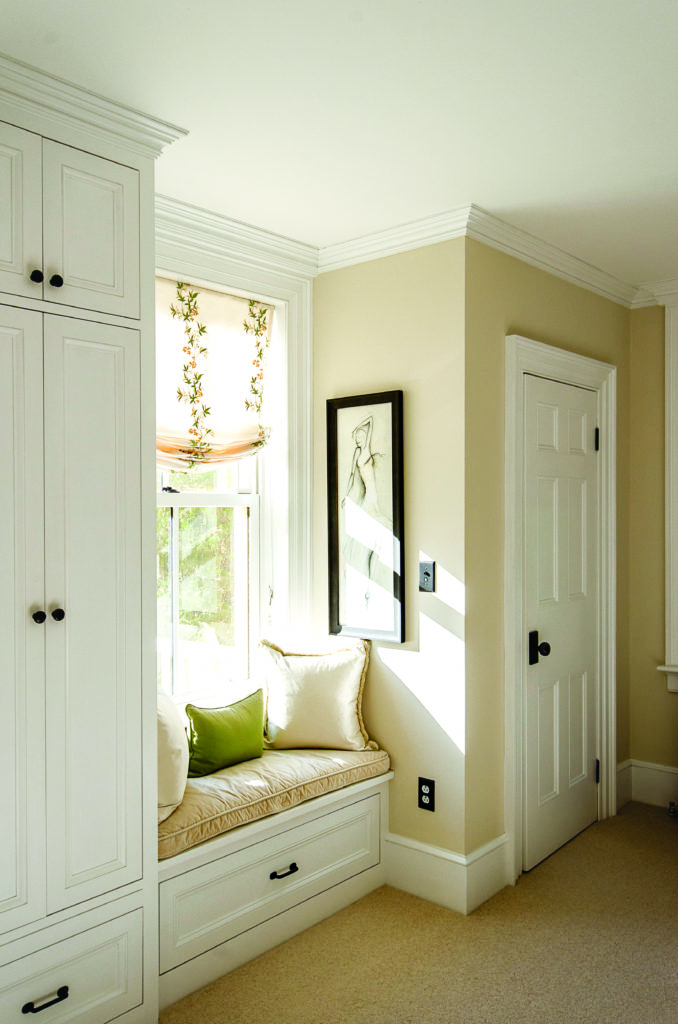 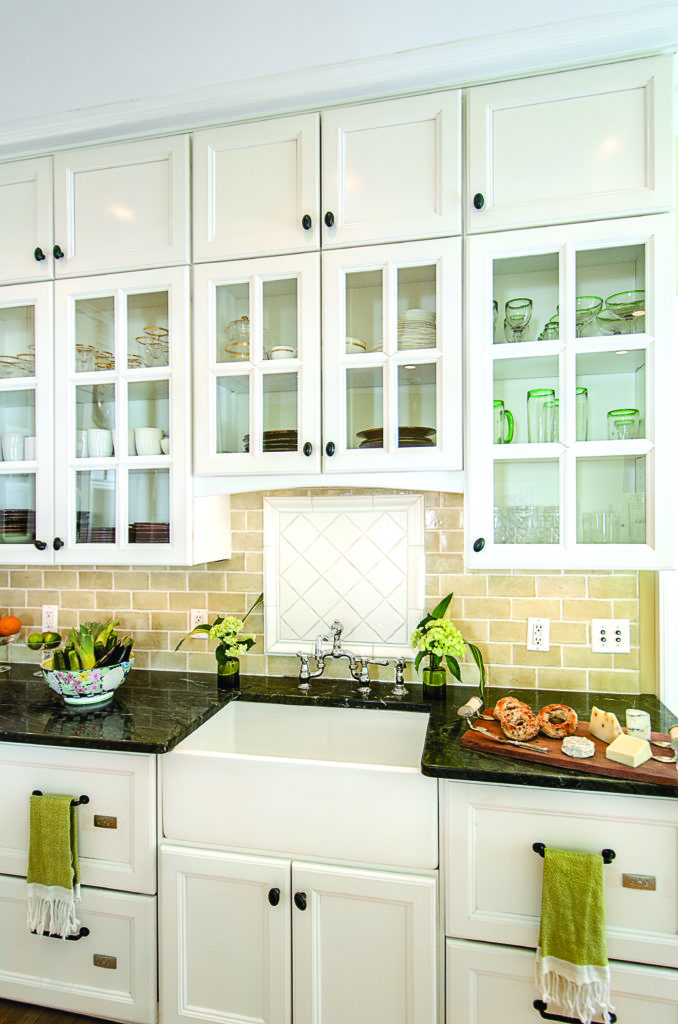 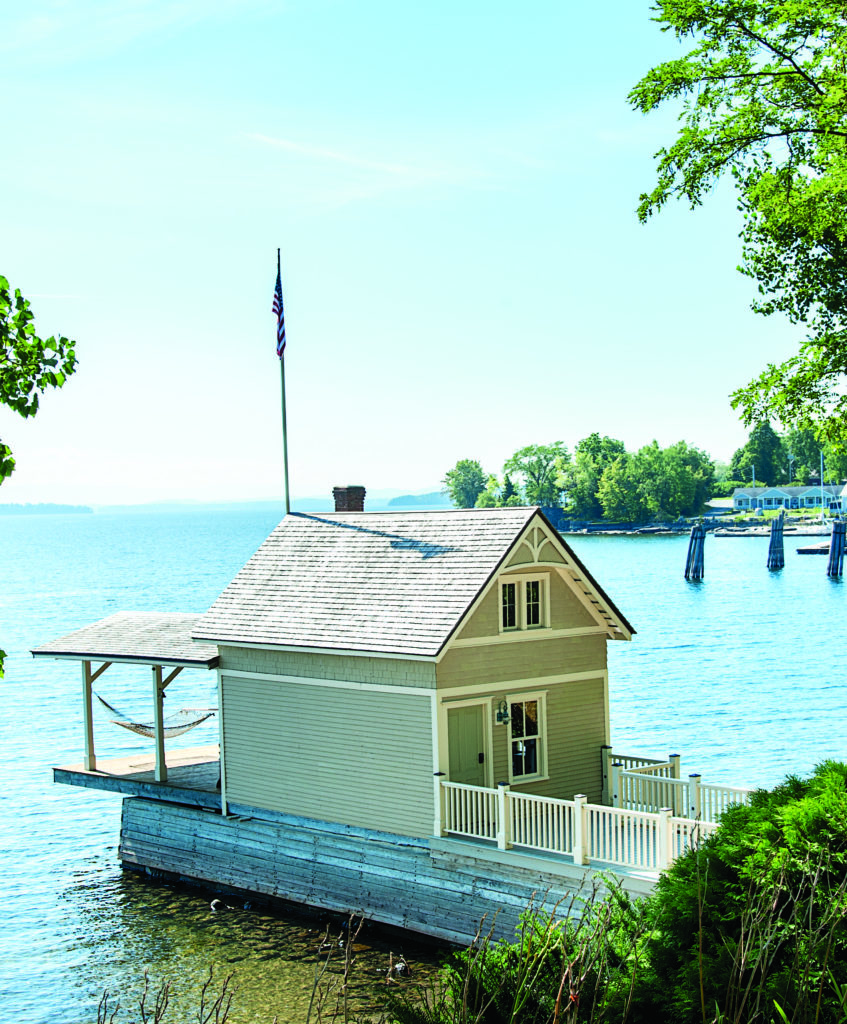 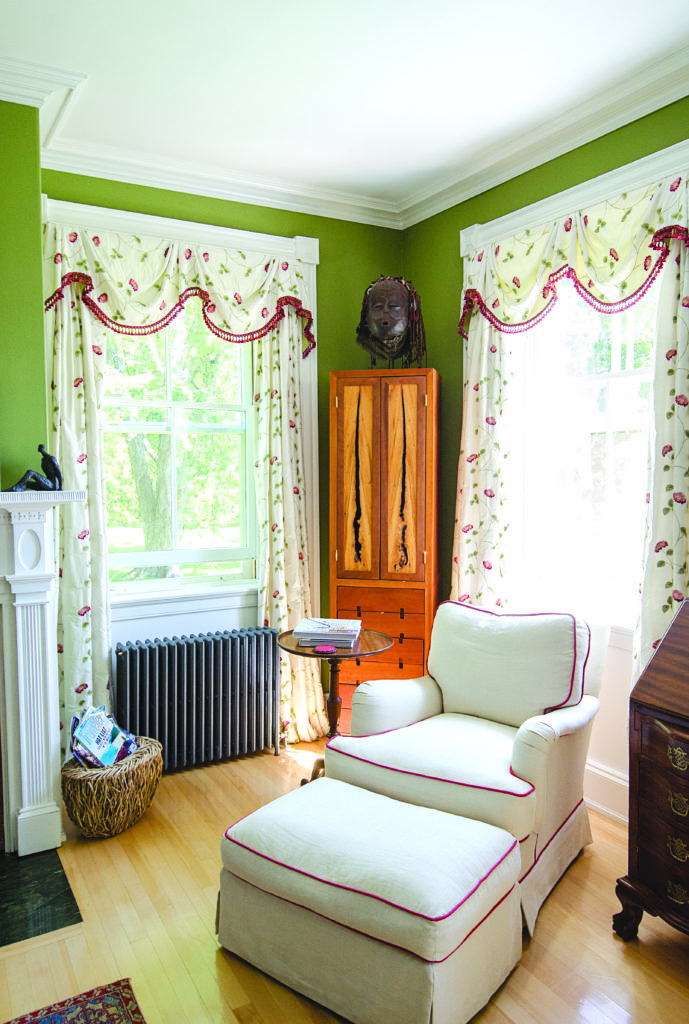 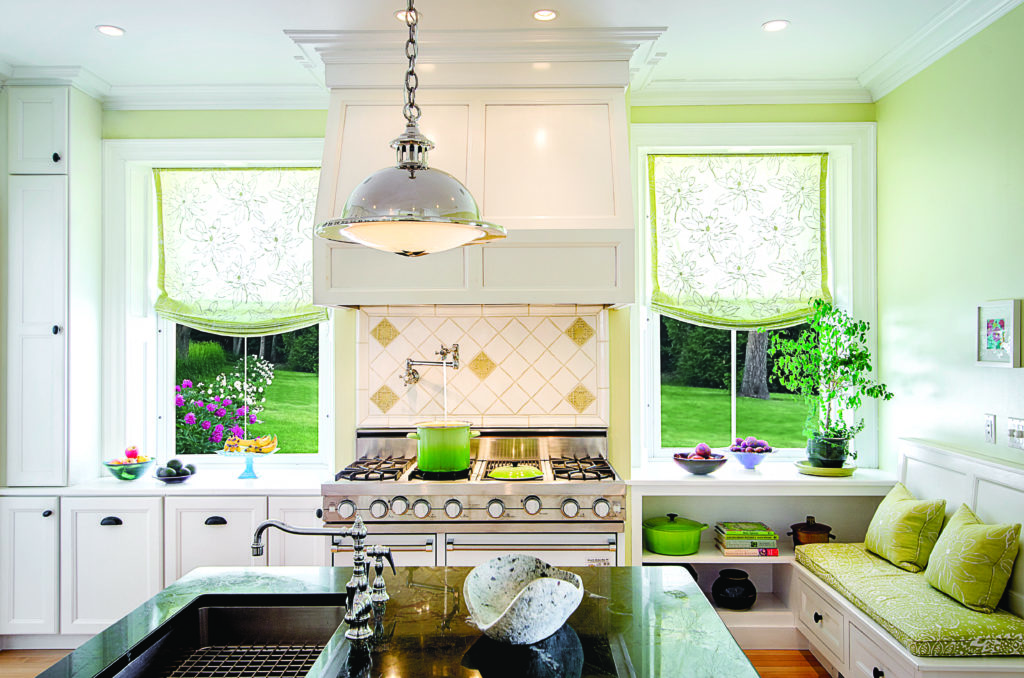