You could say Bridgid Fennell and Anthony Molinaro got lucky. In the months leading up to their wedding, the couple had been searching for the perfect Craftsman bungalow. Their first bid on a house in South Pasadena had been rejected, but while they were on their honeymoon, they got a call about another house that was about to come on the market—one with the exact same floor plan, and a very similar exterior.

“They were both plan-book houses, we think from a company in L.A.,” Bridgid says. The couple snapped up the house before it was even shown to the public, and began settling into their new neighborhood and rectifying remuddles inflicted on the house by previous owners.

Because Anthony had recently begun taking woodworking classes at a local workshop, the couple’s first order of business was to restore the woodwork in the living and dining rooms, which had either been painted or removed entirely. They hired local painter Mary Gandsey to strip and refinish what remained—the dining-room breakfront, molding, window and door casings, and some wainscoting—while Anthony set about re-creating the missing elements. 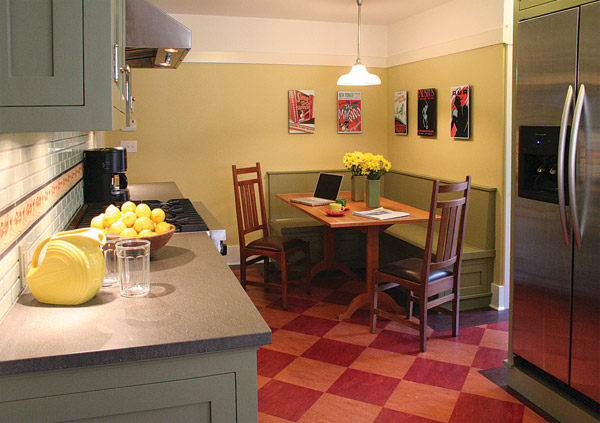 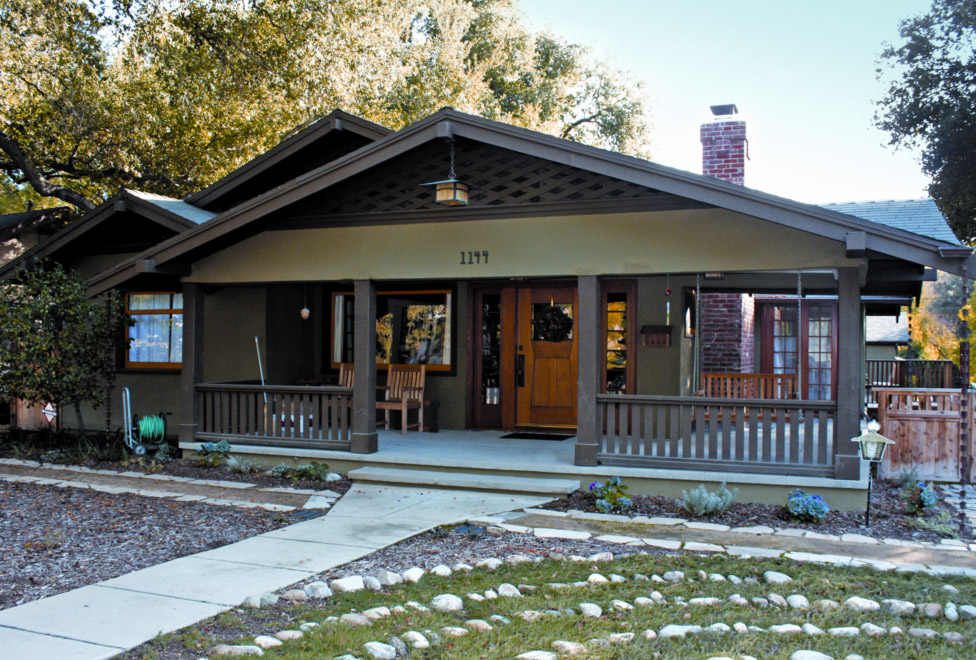 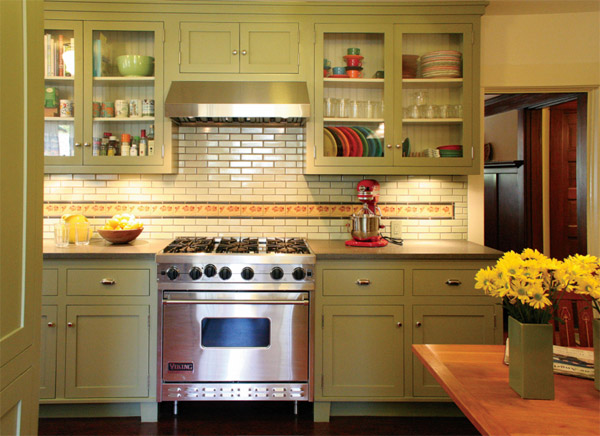 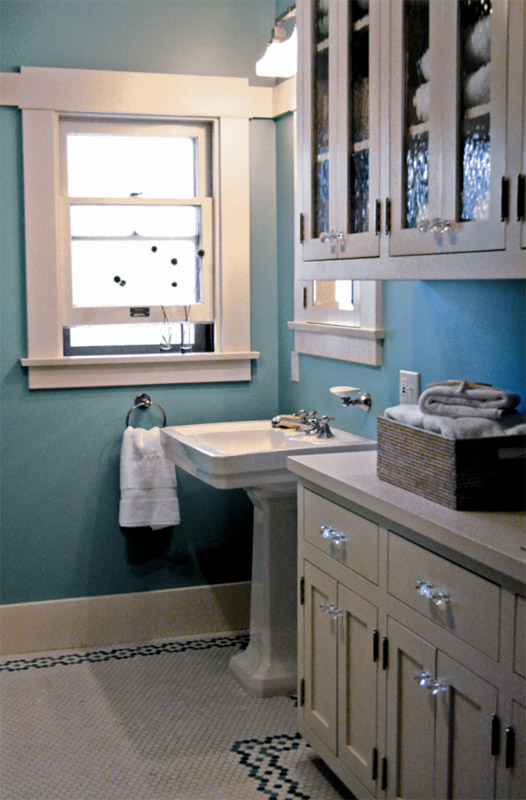 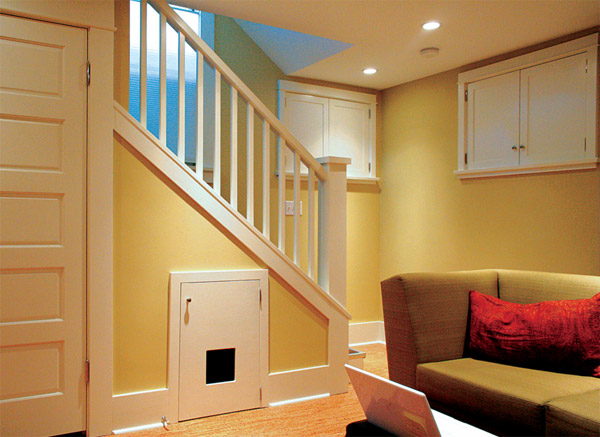 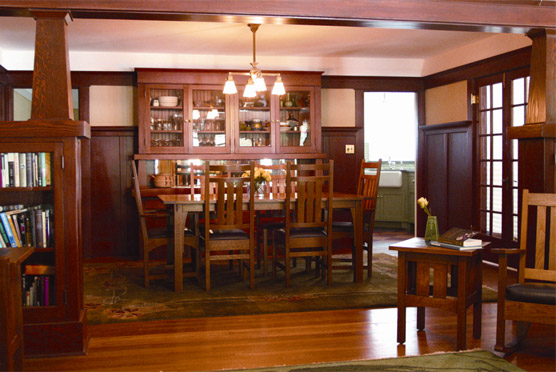 His work was aided by a fortunate discovery: an original door from the long-gone colonnade, which he unearthed while trying to evict a family of feral cats from the attic. “It matched the profile of the breakfront, and looked like a door from a standard colonnade-style bookcase,” Anthony says. “Using the breakfront as a guide, I was able to design a new colonnade based on the profile of that door.”

Anthony also created a new mantelpiece for the reconstructed masonry fireplace in the living room, and a plate rail and wainscoting for the dining room, using Douglas fir paneling salvaged from a nearby bungalow that was being torn down.

After a few years of living in and working on the house, the couple happened upon another lucky break. While volunteering as docents on a neighborhood house tour, they met architect Lisa Henderson, who had recently left her job at a large corporate architecture firm to embrace her passion for historic preservation by starting her own residential firm, Harvest Architecture.

The three hit it off right away, and Bridgid knew Lisa was just the person to help them tackle some of their home’s larger issues—namely, two cramped and period-inappropriate bathrooms and an awkward, closed-off kitchen. “We clicked very well,” Bridgid remembers. “She was the only architect we interviewed.”

Lisa needed no introduction to Bridgid and Anthony, having witnessed their restoration work firsthand while walking her dog around the neighborhood: “There used to be this horrible fence in their front yard. Right after they moved in, it disappeared—they were the heroes of the neighborhood.”

Once she was able to peek inside the house, Lisa had some definite ideas about how to best maximize the space. “It’s such a fun puzzle for me to look at the floor plan and see how I can repurpose the space,” she says.

In this case, she reoriented the kitchen by removing a bank of cabinets and relocating the appliances, creating a corner breakfast nook. The move freed up some extra space, allowing Lisa to shift a wall to create a roomier master bathroom. That, plus the removal of a blue-tiled shower stall, helped transform the bathroom from “dark and clunky” into an airy retreat. “She did a lot of problem-solving,” says Bridgid. “She flipped everything and made it all fit in a limited amount of space.”

The guest bathroom footprint remained unchanged; Lisa merely removed a tiled divider and some poorly placed cabinets to open up the room. “The divider on the end of the tub wall was blocking the whole room,” she says. “It sucked all the air out of the space.”

In the process of rearranging the rooms, however, Lisa and her team stumbled upon a couple of decidedly unlucky obstacles. After gutting the kitchen, they discovered that, in the process of performing electrical work, previous owners had over- and under-cut the floor joists so many times that little more than an inch of support was holding the kitchen up over the small basement beneath it. “I’ve seen some bad stuff,” says Lisa, “but when we discovered that, I literally told everyone to take a step back.”

The process of shoring up the kitchen floor led to another project not part of the initial plan: remodeling the basement, which Bridgid and Anthony had been using as a laundry room. “We weren’t going to touch it,” says general contractor Gilbert Vuagniaux, “but when we found out the floor in the kitchen was so bad, we had to add new ceiling joists and beams anyway.”

So the team went about putting new framing and drywall in the basement, only to run into another obstacle: Upon inspection, they learned that the space—a later addition by previous owners—wasn’t up to code, thanks to a half-inch ceiling height discrepancy on one side of the room. They were given two choices: “Either rip it all out and have it be a typical California basement, or bring it up to code,” says Lisa. Weighing their options, Bridgid and Anthony decided the best choice was to turn the 10′ by 10′ room into additional living space.

Doing so required some heroic measures from Gilbert’s team—including jacking up the corner of the house, removing the basement walls and pouring new ones without the aid of machinery, rebuilding the staircase, and installing window egresses—but once it was finished, the space quickly became one of Bridgid and Anthony’s favorites.

Thanks to its southern exposure, “it gets all this light that the living room doesn’t,” says Bridgid. “It’s one of the nicest rooms in the house.”

Because it wasn’t original to the house, Bridgid and Anthony took a few liberties with the basement décor, trimming the space with white woodwork, recessed lighting, and contemporary furniture. The rest of the house, however, hews strictly to its Craftsman roots.

Following the trend set by the salvaged Douglas fir wainscoting in the dining room, Bridgid and Anthony tried to use salvage items wherever possible throughout the house—the center-fill tub in the master bath, for example, was rescued from a Dumpster in nearby Alhambra—filling in with reproductions where needed. “We tried to keep everything in the original style and spirit of the house,” Bridgid says.

In the kitchen, that original style includes linoleum flooring, custom-made cabinetry and molding, and an art-tile backsplash. Lisa livened up the room by painting the cabinets green, but made sure the colors remained muted.

“I wanted the kitchen to blend with the living room and dining room,” she says. “Instead of being bright and jarring, it’s more subtle, warm, and relaxing.”

On a project where even annoying roadblocks turned into happy accidents, Bridgid considers the team behind the restoration to be its most fortuitous aspect. “We were so lucky to have Lisa and Gilbert,” she says. “We all worked so well together.”

Lisa clearly agrees. “The four of us made an amazing team,” she says. “Even with all the hiccups, it was such a successful project, and one they can appreciate for a long time.”

Clare Martin Alexander is a former Managing Editor of Old-House Journal. Her writing specialties for the magazine are travel and historic houses, makeovers, and tool testing. Clare is raising her family in Colorado.

A Modest Kitchen for a 1747 Survivor

Farmhouse on a Vineyard