Some relationships seem predestined, like that of Gary Brewer, partner in the firm of Robert A. M. Stern Architects in Manhattan, and the Yonkers home with which he was smitten. He caught his first glimpse of the American Foursquare in The New York Times’ Real Estate “Living In” column, profiling the Park Hill neighborhood. Among the highlighted houses for sale was the vintage beauty Brewer now calls home.

After renting an apartment in Manhattan and then a town house apartment in Brooklyn, Brewer was ready for a long-term commitment. At the time, he was working on the Perkins Visitor Center at Wave Hill in Riverdale in the Bronx, another 19th-century Manhattan suburb, when he decided to take a side trip to Park Hill: “I had never been to Yonkers. I drove around Park Hill and then up to the house I had seen in the Times article. The attraction was immediate.” With its stucco façade and terra cotta roof, the home had great curb appeal. After a look inside, Brewer bought it. 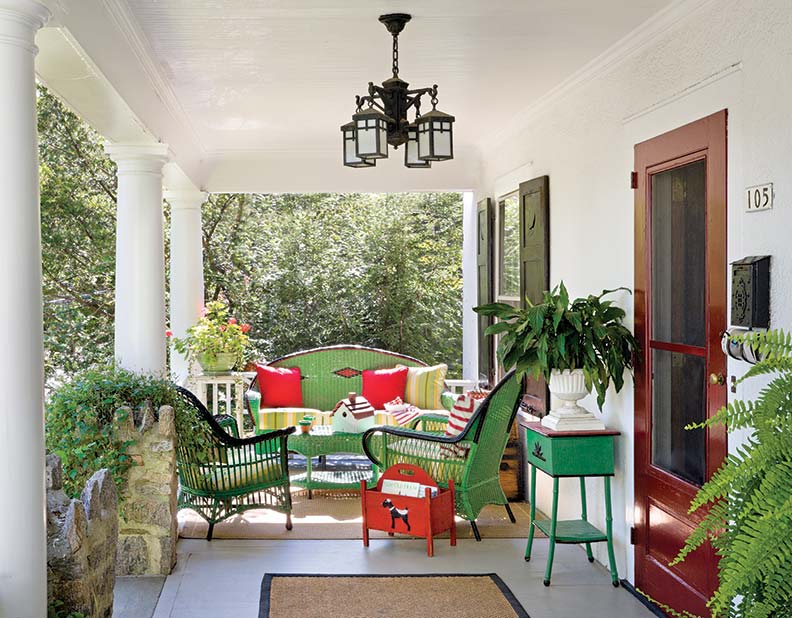 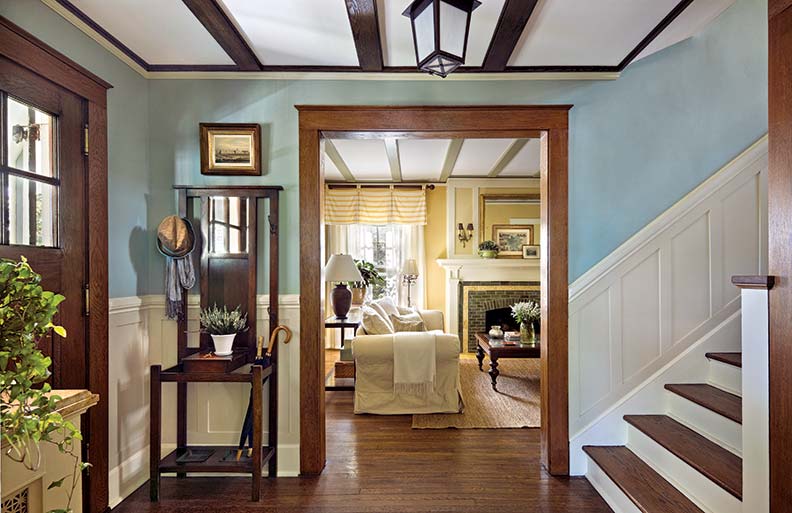 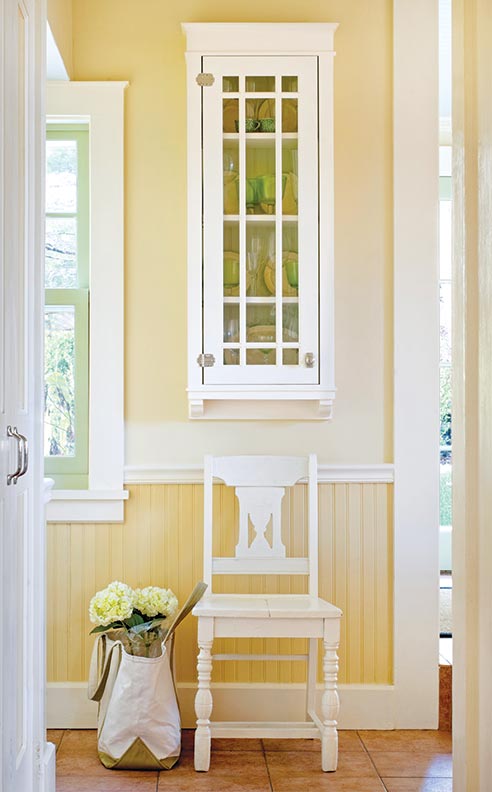 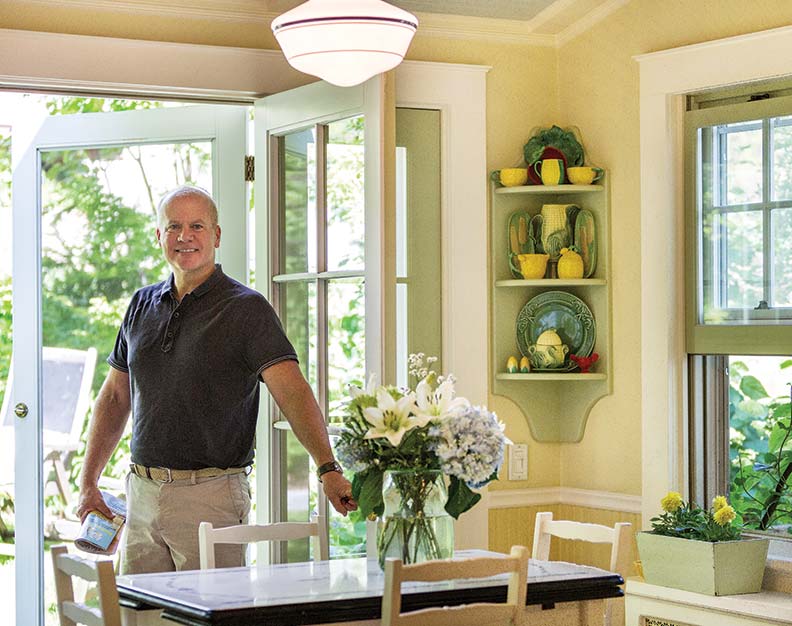 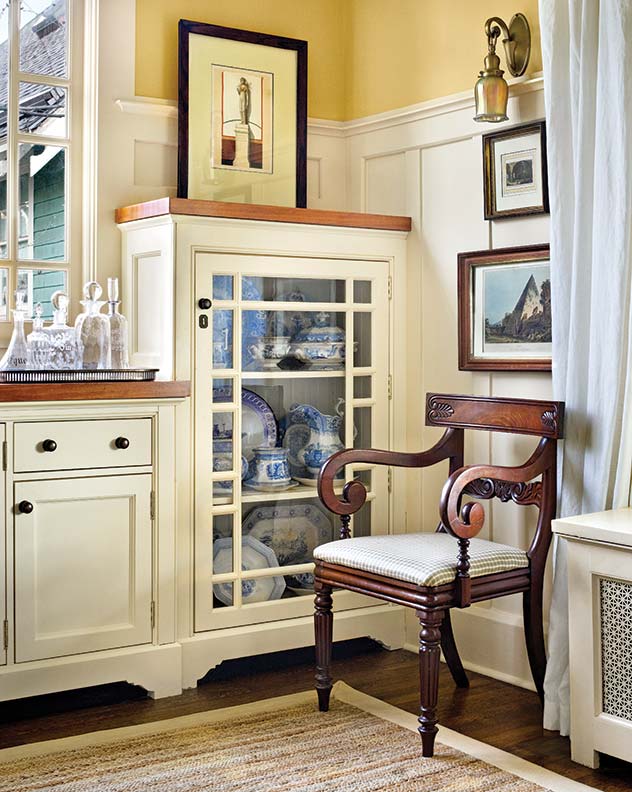 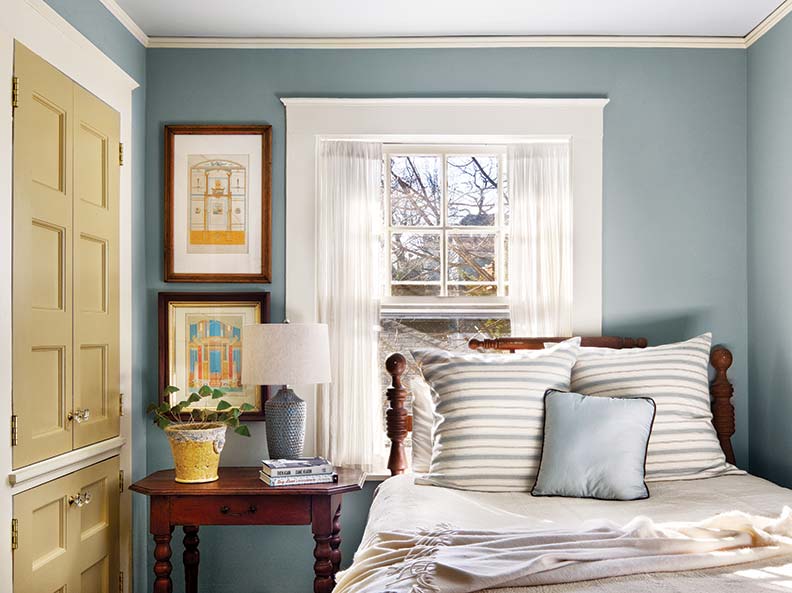 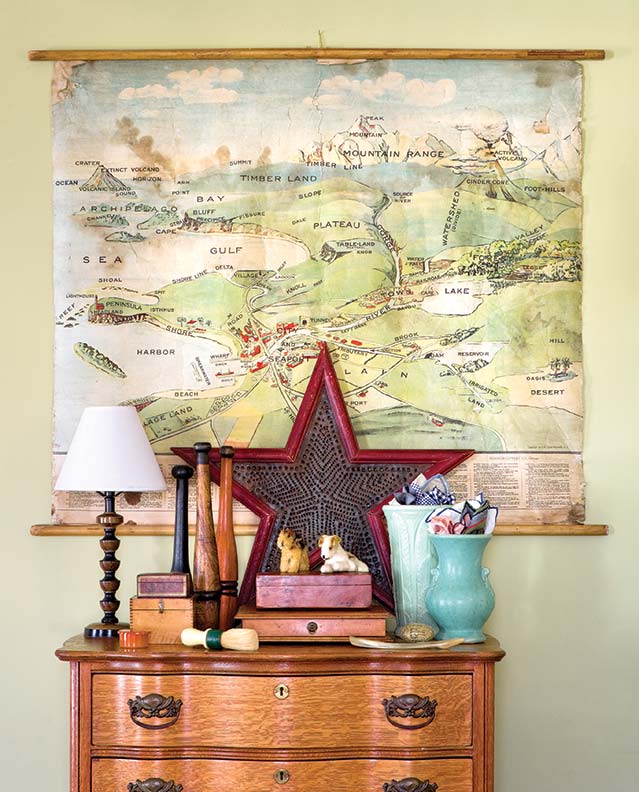 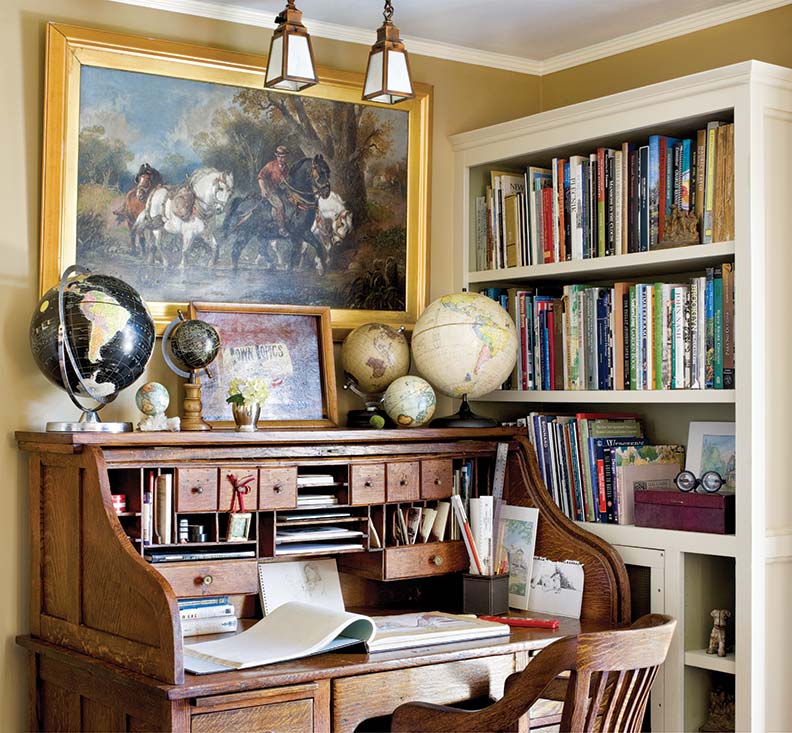 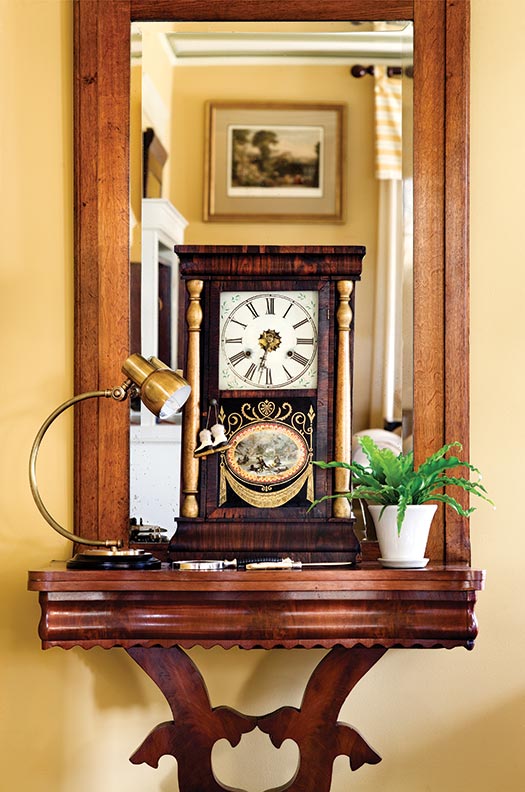 Just as in any new relationship, the house came with a past. “The inside was a wreck,” Brewer says. “It had wall-to-wall shag carpeting, and the kitchen was a disaster.” Add to this rotting front porch columns, a crumbling chimney, and a second floor porch that was in need of a new roof.

Brewer counsels his clients to have a master plan and follow a sequence of work phases, but he proceeded to do the opposite, approaching the renovation of his own home more organically: “I ticked through projects in no particular order, except that I was working on whatever I could not bear to live with.”

He started with the landscape. While the hilly lot had some lovely old trees and a stone retaining wall, he added further interest by replacing concrete walkways with bluestone and creating a terrace with its own stone wall off the kitchen. He replaced the front columns and gave the porch a new painted floor, new handrails, and a new Azek soffit and crown.

Brewer then shifted his focus inside. He knew a bit about the American Foursquare. Its boxy, straightforward hipped-roof design was embraced as a correction to the ornate excesses of the Victorian period. But just as Victorian architecture borrowed from many styles, so too did Foursquare designs. “The outside can be Colonial, Arts & Crafts, Mediterranean,” Brewer says. “Mine is a bit Arts & Crafts, but the clay tile roof is more Mediterranean.” His goal for the renovation was “to make it more period appropriate, more of what it was.”

One way he made the house “more of what it was” was by adding beams like those found in the living room to the entry and dining room. While his initial thought had been to strip the home’s casings, trim, and the floors to uncover their natural features, Brewer quickly discovered the labor was not worth the result, so he elected instead to repaint the baseboards, trim, chair rails, and wainscot white (adding woodwork where needed) and refinish the quarter oak floors.

Another key architectural interior element he updated was the living room fireplace: “Everything was exposed dark brick,” Brewer recounts. “And the first thing you saw when you entered the house was a drab, dark oak mantel.” Brewer replaced the brick with green Waterworks tile, adding Soho custom woven rope tile as an accent. A new white mantelpiece with pilasters replaced the original Arts & Crafts oak mantel. “Since some of the house has classical elements, I could do classical here.”

The dining room underwent more extensive changes, which included a new picture window; a built-in buffet, which joins an antique hutch in displaying Brewer’s collection of 19th-century transferware; and new sconces and a hanging light fixture from Rejuvenation.

The room that saw the most dramatic transformation was the kitchen, last renovated in the 1970s. The intention for the new kitchen, Brewer says, was “to make the room feel like a porch because it opens to the backyard and the landscape.” To that end, the bamboo and butterfly wallpaper was stripped from the walls and ceiling, and the walls were painted a bright cream. Terra cotta tile replaced the linoleum floor, and the ceiling was clad in beadboard, painted blue and framed in white beams. In painting the ceiling, Brewer is calling attention to a typically neglected space, he says. “Most people forget that the most important part of the house is the ceiling because walls are covered by furniture, the floors with rugs, while the ceilings are exposed. Painted ceilings add interest.”

Rather than gutting the kitchen cabinets, Brewer kept the existing boxes and had his carpenter refit the lower cabinets with doors found online and the upper cabinets with restoration glass and crown molding. The appliances, Carrara marble countertop and island, and Daltile backsplash are all new, as are the Marvin windows—a particular boon for the breakfast bay, which originally had only three tiny windows and now welcomes light from three sides. The imagined narrative for the kitchen, Brewer explains, is that it should appear to be a mid-1930s-to-’40s-era update of the original 1906 kitchen. The mid-century dishes, salt and pepper shakers, and other accessories help further that illusion.

Choosing paint colors was one of the biggest decisions Brewer faced during the renovation. Daunted by the possibilities, he narrowed his search to traditional Farrow and Ball paints, selecting different creams and beiges for the main living areas. For the rooms upstairs, he added to the palette, with the guest bedroom dressed in blue–gray, the library in Cat’s Paw, and the master bedroom (created from two of the original bedrooms) painted Ball Green. “The house is on a hill with trees,” Brewer says, “and from the master bedroom, we look into a canopy of trees, so I chose a green to play up the connection to nature. It’s a bit like sleeping in a treehouse.”

The house certainly came into the relationship with a past, but Brewer, too, brought baggage with him—literally. One product of his favorite pastime of visiting antique stores and flea markets was a collection of vintage suitcases, two stacks of which now stand in the master bedroom. “I started buying suitcases because I thought they were beautiful,” he says.

When collecting suitcases became increasingly popular, he switched to globes. A cluster sits atop the roll-top desk in his library. “I think it is charming that people had globes to look at to see maps in the past, as opposed to today, when we look maps up online.” As for the desk, he sees it as a late 19th-century version of a laptop, offering compartments to organize papers, projects, and tools, and locking for safekeeping. Brewer also collects landscape paintings, both by artists associated with the Hudson River Valley School and by mid-20th-century amateurs, and these are seen hanging throughout the home.

Just as Brewer likes artifacts from the past, so too does he love renovation: “I like being an architectural archaeologist, trying to uncover what was there in a home before or what was there in a time period.” Of his own home, which he shares with wife Barbara and Scout, his wire-haired fox terrier, Brewer says, “I love living here. I drive up and look at the house and think it’s amazing the way they used to make houses, the craftsmanship, the care, the proportions.” Part of his goal with the renovation was to create “a piece of art or a testament to homebuilding. I wanted to show people you can renovate a modest-sized house without its being wildly costly.” He also likes to highlight quality over quantity: “When people build new houses, they think they need more space than they usually do. Sadly, they are often willing to trade quality and detail for size.”

In the case of this Yonkers Foursquare, the home with the great curb appeal turned out to have soul as well. It just needed the right suitor to release its inner beauty.

The House That Passion Built