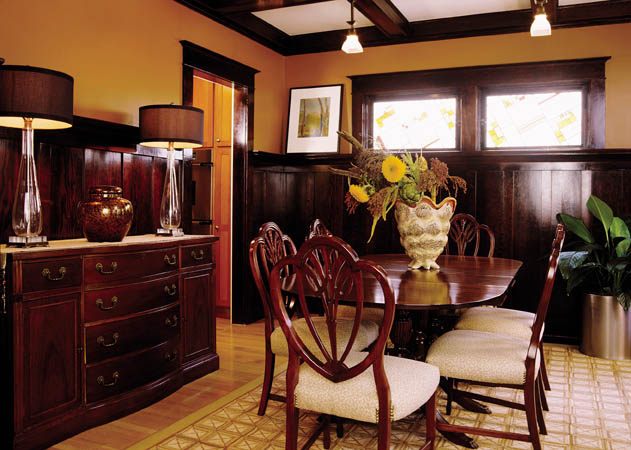 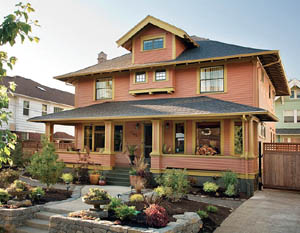 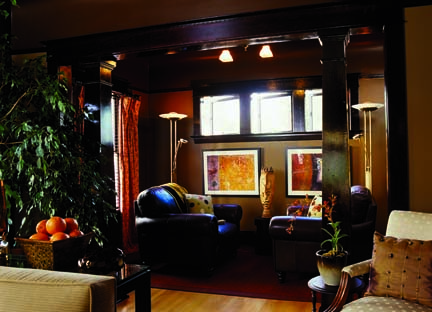 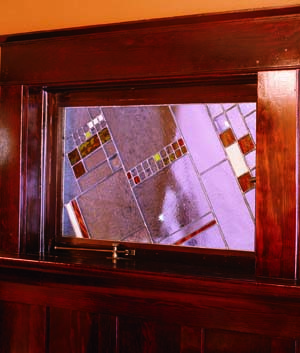 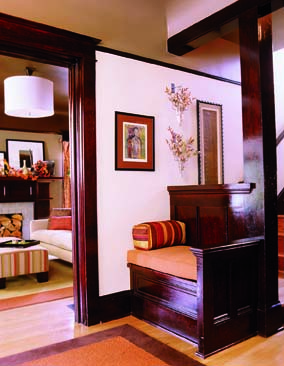 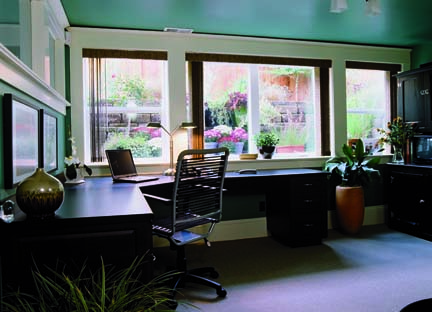 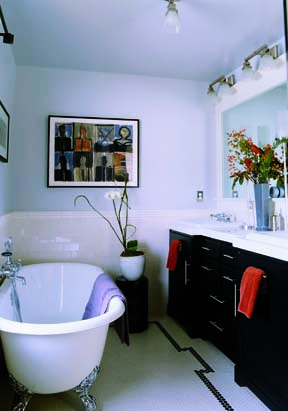 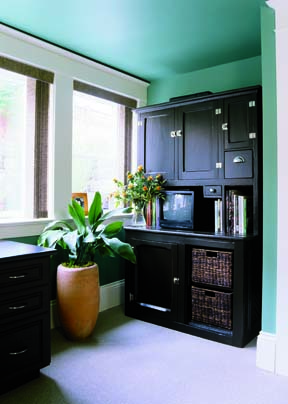 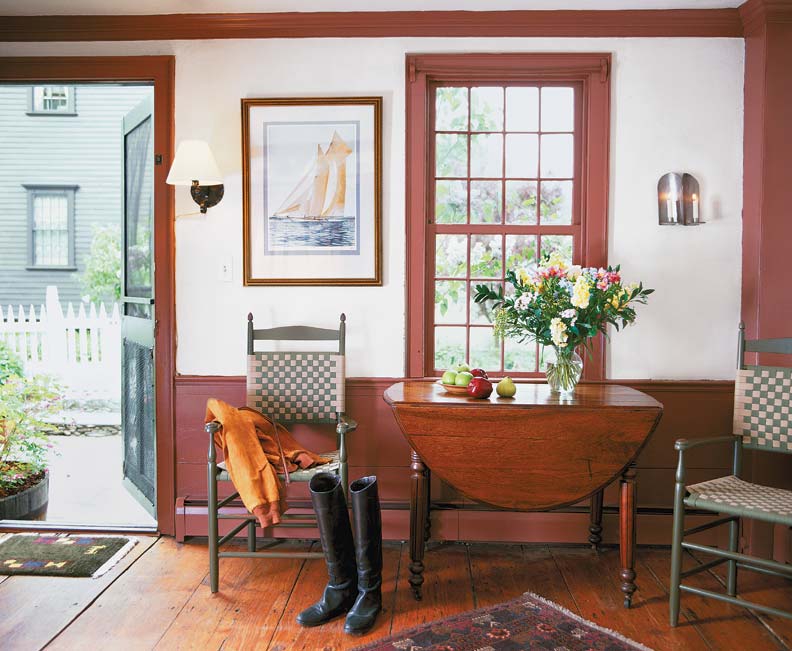 With the glut of cookie-cutter tract homes and the slow disappearance of fine architecture in today’s housing market, one can only cheer when a pair of preservationists appears on the horizon determined to carry forward architectural references from the past, whether strictly for historic purposes or simply as a tutorial for today’s homebuilders.

Garrison Hullinger and J Jones became preservationists rather reluctantly. Drawn by a dilapidated Foursquare, which was nearly razed to build condominiums a few years ago, the pair had no intention of coaxing this house back to its former glory-not after having painstakingly restored a 1912 Edwardian flat in San Francisco prior to moving to Portland, Oregon.

“We only wanted to consider houses built after 1975,” says Hullinger. But after viewing 11 homes in this category, the men were swayed by an impromptu visit to the charming tree-lined Irvington neighborhood and the recently rescued 3,500-square-foot 1909 Foursquare.

At first glance, all the necessary renovation work seemed to have been done, including the basement, which consisted of an expansive office, family room, laundry, and newly installed downstairs bath. Jones, owner of a small, IT consulting firm, was particularly attracted to the office space.

The kitchen, on the other hand, presented a number of drawbacks, especially for Jones, who loves to cook. The cabinets were too small to house dinnerware, the 12″-by-12″ Chinese green tile countertops clashed with the cheap backsplash, storage space for food and pots and pans was insufficient, and the tiny blue country-style island was out of keeping with both the architecture and the room’s proportions.

Hullinger, a retail consultant with a flair for interior design, went into overdrive, searching for ways to resolve the kitchen’s visual and spatial deficiencies. In the end, it was his finding a suitable pot rack and an idea to redesign the island with an oversized terrazzo concrete countertop that prompted the purchase of the house in December 2004. “That is when I knew the house would be ours,” says Hullinger.

Information about the history of the house began to trickle in from myriad sources—delivery men, a neighboring historian, and a host of elderly women no longer afraid to stroll down the north side of the street in fear of chained rottweilers that once guarded the then-dilapidated home.

The house was originally built by the architectural firm of Roberts & Roberts, for W. H. Dimmick, at a sale price alternately recorded as $3,000 in one set of records and $2,500 in another. According to neighbor James S. Heuer, the Roberts firm operated a design/build company in Portland from 1909 to 1910 building a variety of houses whose architectural styles ranged from Foursquare to Colonial.

Over recent years the house had been neglected. One passerby had been moved to snap an impromptu photo of “the scariest house he’d ever seen.” The ghostlike image recorded porch pillars pitched sideways, siding full of gaping holes, and a porch roof teetering on collapse, with only a curtain of black plastic to act as its safety net. The then-homeowners had fallen on hard times, and a development company subsequently took over the house, with plans to raze it.

Heuer and another neighbor, Robert Mercer, prompted the Irvington Neighborhood Association to write a letter urging the developers to save the old house. The company eventually complied and spent one and a half years on the restoration, during which time they rebuilt the front porch, added two baths, as well as powder room beneath the formal staircase, updated the kitchen, refinished the original first-floor woodwork, and created a new fireplace surround.

The driveway is the only space that separates the Foursquare from a neighboring condo. To maintain privacy while entertaining in the dining room, Hullinger designed a pair of stained-glass windows to crown the original woodwork-the stained glass was a gift from a friend in Elgin, Illinois. Hullinger hand-cut the artisan glass dating from the early 1900s that had once belonged to his friend’s grandfather.

“I wanted to stay with the Craftsman elements of the Foursquare,” says Hullinger, “but since I don’t like things to be symmetrical, I began playing with the idea of slanting the glass, a design inspired by Mark Levy, a Southern California glass artist.”

To make the house more intimate, the owners chose warm tones to paint over the renter’s white. These hues were inspired by the 1895 Roycroft community, part of the original American Arts & Crafts movement. “Normally I use a flatter paint,” says Jones, who painted the living room with darker ceilings and lighter walls, “but I chose a satin finish for the living room ceilings to give some sheen at night when they’re illuminated by lights.”

The colors for the living room décor all sprang from an impromptu purchase of a striped ottoman. “We loved the orange and apple green,” says Garrison, “but we were afraid to move on until we found the carpet.” They stumbled on a bonanza at the Mill End Store in Milwaukee, Oregon, where Garrison designed the living room and entry carpets from remnants, which the company bound for them.

The owners found themselves rapidly transitioning from one redesign project to the next. They launched into a months-long landscape project shortly after tearing out the kitchen—the remains of which shocked the neighborhood as they lay exposed on the freshly laid sod, now uprooted to accommodate a Japanese maple. Pete Wilson of Stone Works installed a stone wall for which Jones drew an undulating concrete path freehand in the dirt from the sidewalk to the front steps. The path spills into serpentine garden paths for which Hullinger hauled all the gravel and laid the flagstone borders.

“We tried to balance evergreen and deciduous plants,” says Jones, who was raised on a farm in Texas, “so we would not just have sticks in wintertime.” Having once planted a garden for his mother so that she would always have something beautiful blooming year-round, Jones was already well acquainted with the general care of plants. The move to the Pacific Northwest, and this Foursquare in particular, however, has opened up a broad new spectrum of plants he’s never encountered before. “One of my favorites,” says Jones, “is the smoke bush. I fell in love with the rich color and the texture of its leaves.”

Indeed, the transformation of the fallen Foursquare has not only impacted Hullinger and Jones’s lives, and those of their rescued greyhounds, Darby and Presley, but also the entire neighborhood. One need only stand on the sidewalk to hear a passersby offer kudos to know just how deeply a comprehensive restoration can affect the soul of an entire neighborhood.