The old house on the corner lot had had a major redo (or a modernizing) in the 1950s. So when my parents purchased it in 1963, it was not an architectural gem, but just an aging house that needed lots of work. Even as a child growing up here, I was intrigued by the house. Sunlight flooded the rooms, it was warm and welcoming, but some of the spaces just didn’t make sense.

I found my younger self investigating, looking for clues to uncover the original configuration. Ghosts of missing windows and old doorframes were hidden beneath layers of wallpaper; edge lines from old shellac made shadows on the remaining woodwork, suggesting elements had been removed. 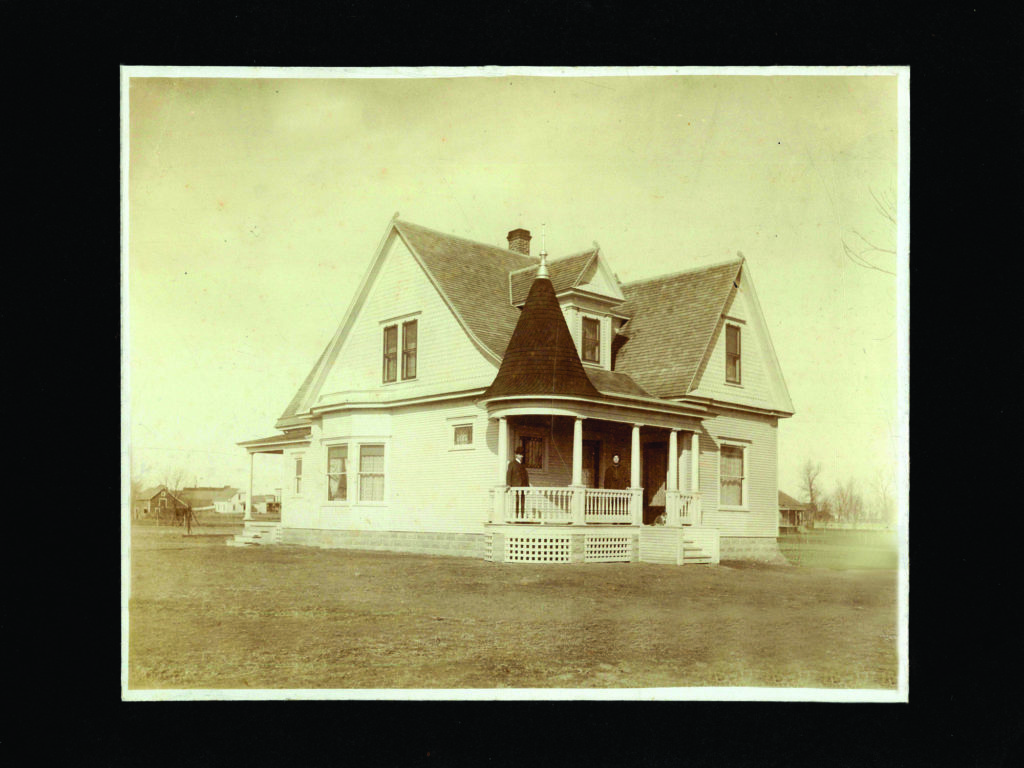 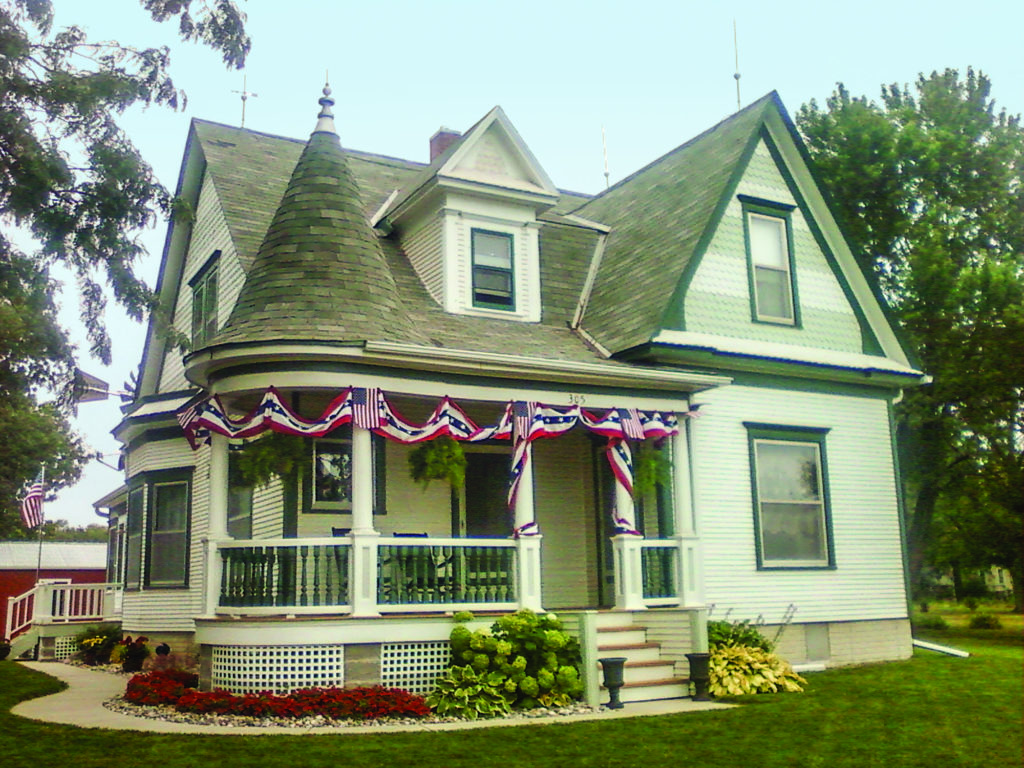 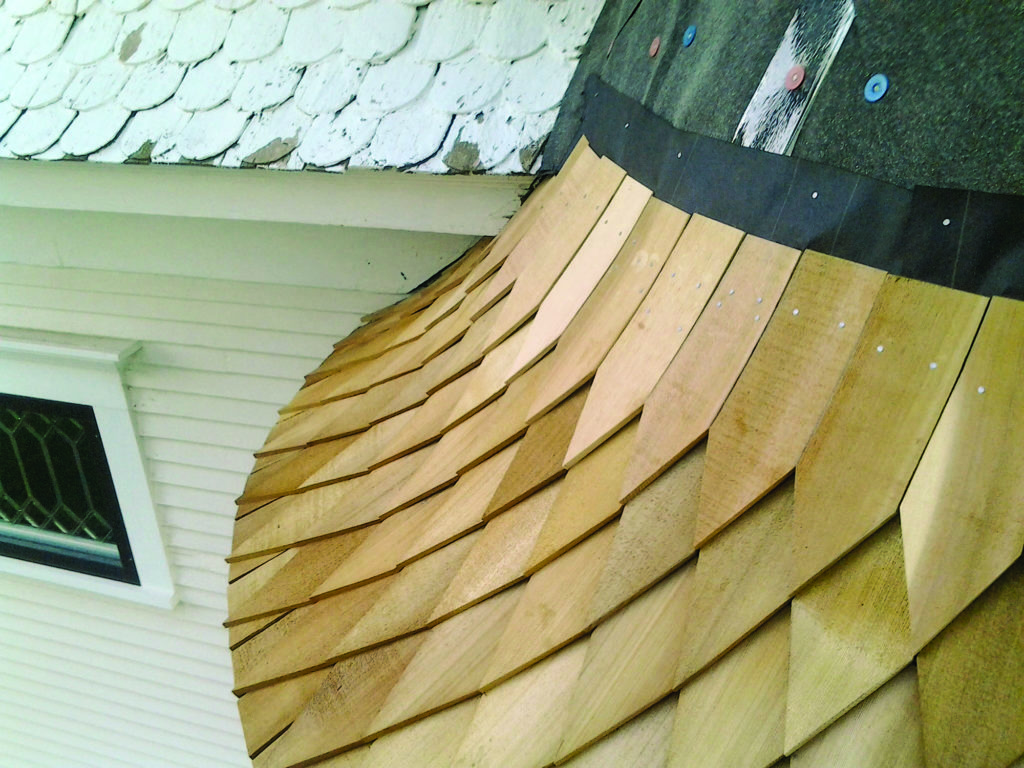 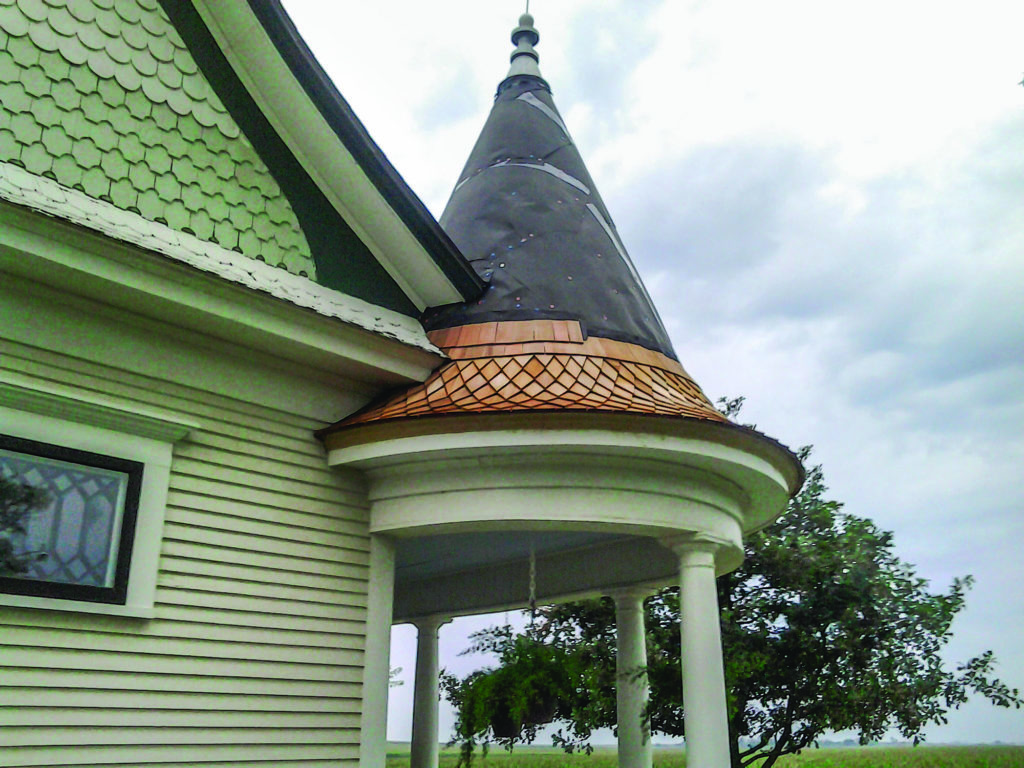 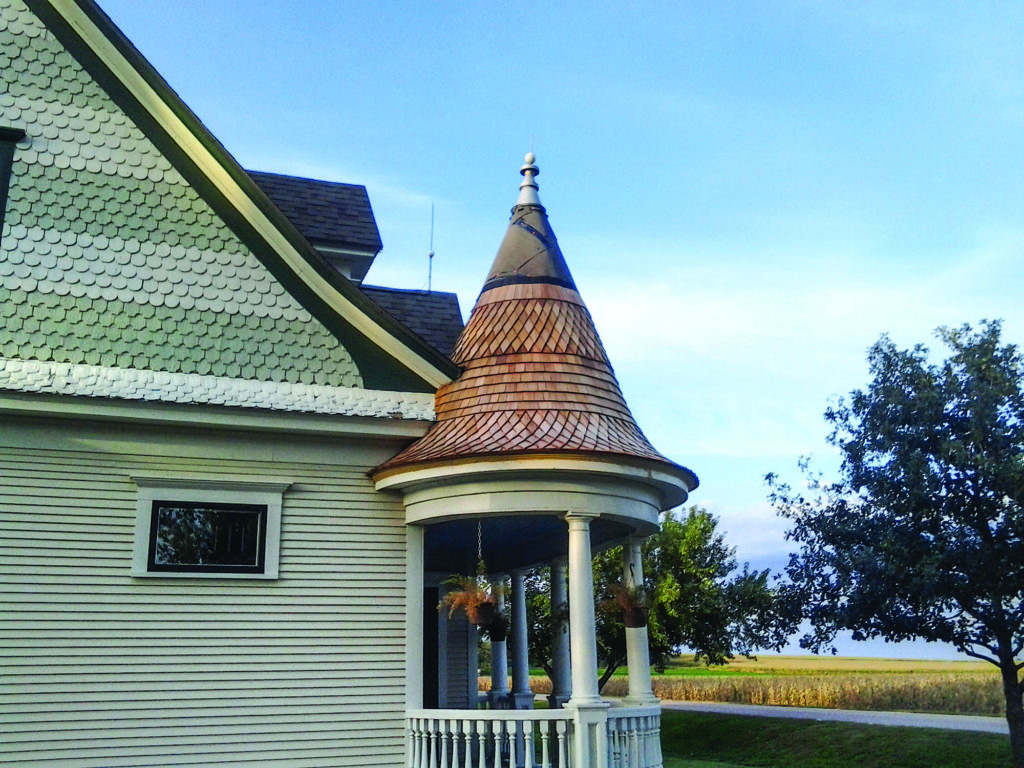 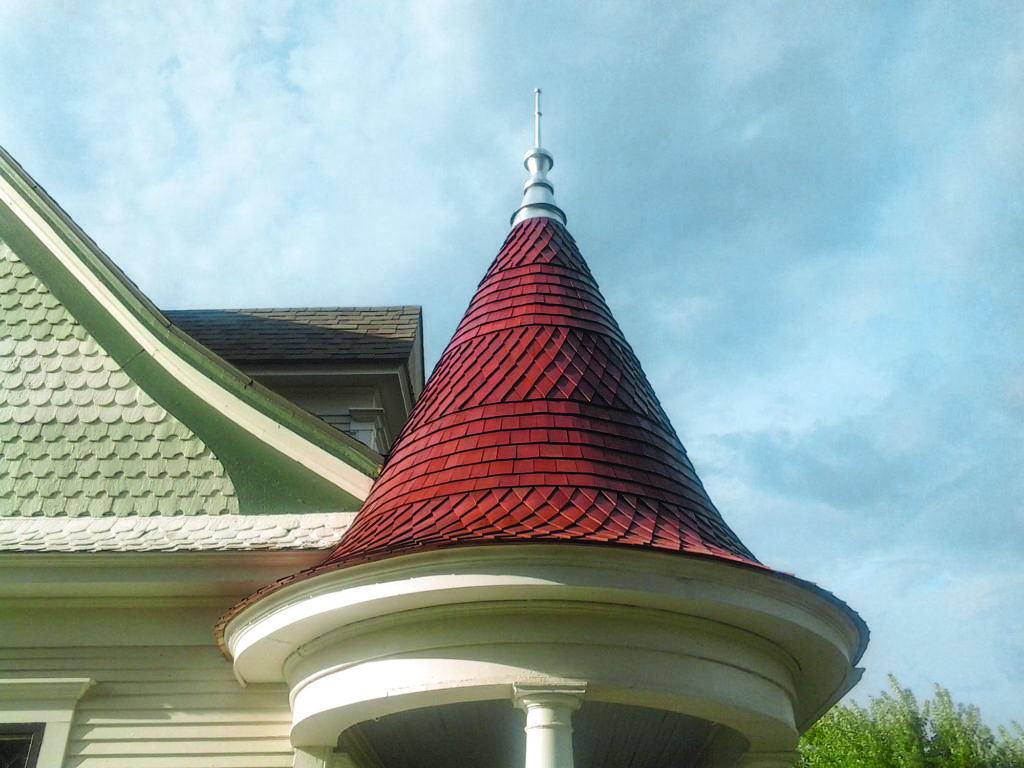 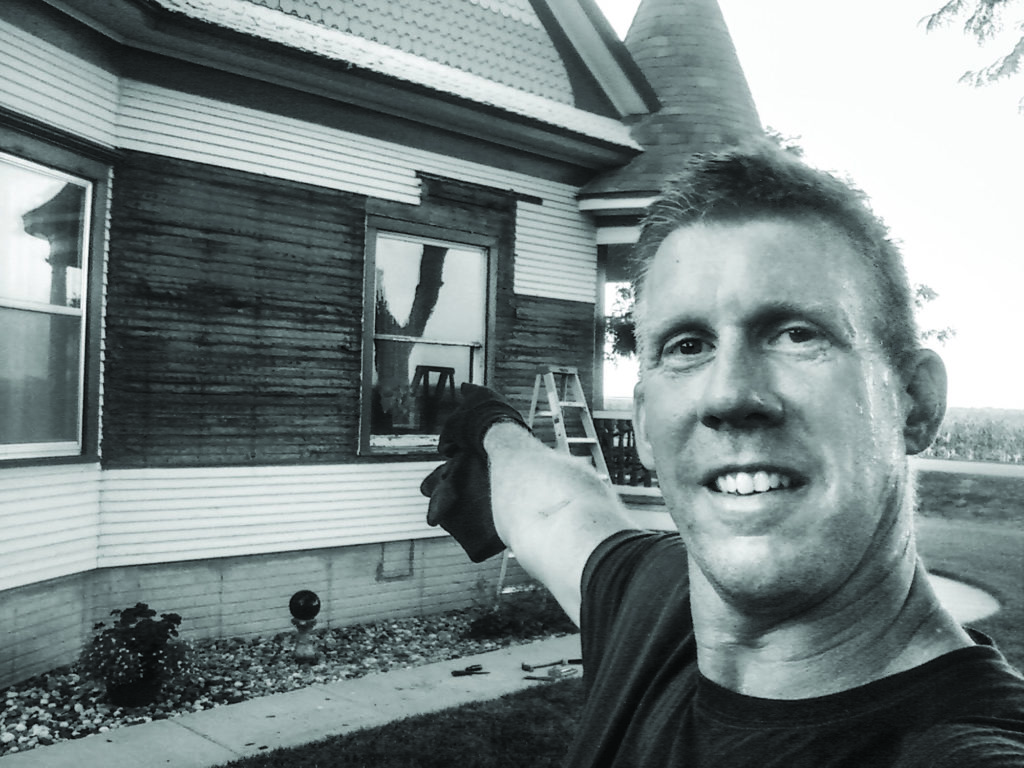 I purchased my parents’ home in 2010 and since then I’ve slowly been taking it back to its original floor plan and details. Every summer I work on one side of the house: scraping, priming, painting, and also reglazing windows. As near as I can tell, the whole roof, including the conical witch’s cap, has been covered over with asphalt shingles since the late 1940s. My parents had had the roof stripped and re-shingled in 1990. That’s when I saw the original details in the deteriorated shingle pattern—buried underneath layers of asphalt. The cap had been roofed in wood shingles, some with fancy butts and laid to create patterns; the shingles were stained dark. But, at that point, my parents had no interest in putting cedar shingles back on the roof.

It wasn’t until after a tornado and hailstorm two years ago that I decided to restore the tower and porch roof. (Damage, insurance concerns, and finances dictated that the main roof be composite shingles, for now.) From the ground, the tower job didn’t look that daunting—I had no idea how many shingles would be needed. I didn’t care, actually; I wanted the house to have this detail back.

The cap took over 1,200 shingles. Of course, I hadn’t realized that the cone was not quite symmetrical; I had to run up and down the ladder to the street and look back, checking that the rows appeared level. The finishing touch was adding a coat of dark redwood stain. Finally, I re-created a finial to match the one that had been installed in 1908. Two friends helped: one laid out the design and cut the sheet steel; the other showed me how to weld it together. My restoration won’t be complete for a few more years. Putting back the open staircase—matching its layout and trim—will be a challenge!

A Labor of Love

DISCOVERY
A meeting with the original owner, an old photograph, and physical evidence (under the asphalt) all pointed to a fancy pattern in cedar shingles, stained red.

FIRST STEPS
A roofing company reshingled the main roof and did prep work on the tower roof. Cedar shingles, included those with diamond-cut butts, were purchased locally.

DIFFICULTY OVERCOME
It took several different-size ladders and over 1,200 shingles to complete the cap. Even with pre-cut butts, three to five cuts per shingle were necessary to follow the taper of the cone.

THE FINIAL FINISH
The tower roof got a deep redwood-color stain. The owner fabricated a new metal finial patterned after the 1908 original.

PHOTOS SHARED
During the late 1970s, I had the opportunity to visit with the original owner of this house. Her name was Jewel, and that she was: sharp-witted, worldly, and an artist. She and her husband, George, a local and very successful hardware-store owner, had the house built in 1908. They paid two carpenters 35 cents each, per day, to complete the project. Though it has some classical flourishes, the house is essentially a late-Victorian Queen Anne cottage, with steep roofs and a witch’s cap topping a rounded porch in a kind of open tower arrangement. Jewel told me the cap had been stained dark red.

Jewel was able to tell me about the original layout of rooms. (As it turned out, George and Jewel lived in the house for only three years. In 1911, they built a smaller house in an Arts & Crafts style.) Later, her family shared photographs of the interior and exterior. The photos have been an incredibly valuable resource during my ongoing restoration. —M.B.

A New Georgian Revival in the Suburbs