“In 2000, when our children were still little, the house my grandparents built on Lake Oswego was not for sale,” says Kasey Holwerda. While they waited for it, she and husband Steve and their three kids were living in a Roscoe Hemenway 1929 Tudor-style house in Portland, Oregon. Then the Mulder–Lake House, also lakeside, caught Kasey’s eye. At the time, the 1927 house was identified as a landmark home by Richard Sundeleaf. “OK, we can go look at it,” Steve warned, “but we’re not going to buy it!” Oh but the house was so attractive, with its original stonework, casement windows, steep rooflines, and cottagey shingles. “This is our home!” shouted Kasey, the minute she walked in the door. If they bought the house, the children could attend the Lake Oswego district schools until the grandparents’ house went on the market. So that’s what they did.

As it turned out, Richard Sundeleaf’s granddaughter, architect Hilary Sundeleaf Mackenzie, told them her grandfather had not designed the house. (In 2006, the Holwerdas hired Mackenzie to design a compatible boathouse.) Research turned up a 1927 Oregonian article confirming that this is instead a Wade Hampton Pipes house. Pipes, an Oregon native known for designing English Cottage-style houses, left Oregon only to study architecture in London, from 1907 until 1911, at the Central School of Arts and Crafts.

Kasey, who has been an OHJ subscriber since 1996 and now chairs the Lake Oswego Historic Advisory Board, went on a quest for authenticity. Convinced by an OHJ cover story about restoration guru Karla Pearlstein’s own historic kitchen in Portland, Kasey tapped into Karla’s network, beginning with Karla’s firm, Restoring History, Inc., and including designer Matthew Roman of Roman Design, LLC.

In conversations with former owners that included the Lake family, Kasey had been looking for old photos of the since- (and often-) remodeled kitchen, but her search proved fruitless. So “we hired Matthew in the fall of 2015, to draw up plans for a period-inspired kitchen.”

“I was the new guy on the team,” says Matthew, who worked with contractor Richard Yung, president of Dearing & Yung in Portland, along with custom cabinetmaker Chris Jones of Hawthorne Woodworking in Gresham. Kasey had previously worked with both Yung and Jones.

“I knew I wanted simple, painted cabinets,” Kasey explains. “I also knew I wanted a tiled countertop, with period sage-green trim, a popular style in 1927.”

Melamine cabinets had been introduced in the 1980s. Four years later, the cabinets were faux-painted and granite countertops installed. A wall separating the kitchen from the breakfast nook had been removed.

“Kasey didn’t want to change the footprint of the original house,” Matthew recalls. “Separated only by an upper cabinet, the kitchen and dining nook bled into one another. To give it definition, we put back a portion of wall but with a wider opening, trimming it to match the rest of the house.” Their model was a large, original, built-in linen cabinet upstairs.

At this point Kasey told Matthew that she had an addiction: thus her basement was filled with antique lighting. The three green light fixtures over the sink, which echo the red and green accents found in the kitchen, come from her collection. “But I have four of them,” she says, “in case one breaks.”

Then Matthew suggested adding a built-in bench to the nook, eliminating some chairs for better traffic flow. He added that he would design storage drawers under the bench and inset shelves for the walls, for the display of Kasey’s pottery collection.

The Dutch windmill border paper comes from Karla Pearlstein’s collection of historic wallpapers, and was picked by Kasey. Pushdot Studios would scale and print it—but with no field paper accompanying the border pattern, Pushdot used Photoshop to replicate the small field found between the double borders.

Other restoration projects included the fireplace in the living room. “It had a marble surround with a Federal-style dentiled mantel that really bothered me,” Kasey says. When they removed both, they found the shadow of the original floating mantel designed by Pipes, one of his signatures. Using the intact master bedroom fireplace as a guide, Kasey selected a Pratt & Larson tile similar to tile remnants found under the marble.

The knotty-pine family room was once a garage. Its fireplace was added in 1933, when the space became an indoor room. “When we removed the brick box insert that protruded into the room,” Kasey says, “we found the original brick and cleaned it. But the fireplace did not draw properly, so we added a gas insert.”

Also in the 1930s, a detached garage was added with attic space above, later made into an au-pair apartment. Kasey located ca. 1930 green bath fixtures at Hippo Hardware, to replace the late ’70s bathroom fittings.

Steve and Kasey Holwerda have been in their “temporary” house for 18 years, lovingly restoring it and learning the skills they’ll need if Kasey’s grandparents’ house ever comes up for sale. In the meantime, Sina, Kisky, and Gunnar have grown up and found homes of their own!

Research confirmed that the house was designed by Wade Hampton Pipes, a London-trained Oregon native known for his English Cottagestyle houses. The garage became the knotty-pine room in the 1930s.

Elements of the Period Kitchen

A purist at heart, homeowner Kasey Holwerda says she has loved working with kindred spirits who shared her vision: to create a period-inspired kitchen that better fits the 1927 house. The highlights:

• The period windmill theme is repeated in the wallpaper border, replicated from a 1920s document.

• The stove only looks old; it’s a reproduction by Elmira Stove Works, meaning it has a large, self-cleaning oven the next owners may appreciate.

• Brackets beneath cabinets and the mudroom shelf echo a motif found in the upstairs hall.

• Tile countertops are very 1920s, and are trimmed in the era’s sage green.

• Original hardware was salvaged from torn-out cabinets and reused.

• The vintage kitchen sink faucet was found on eBay. 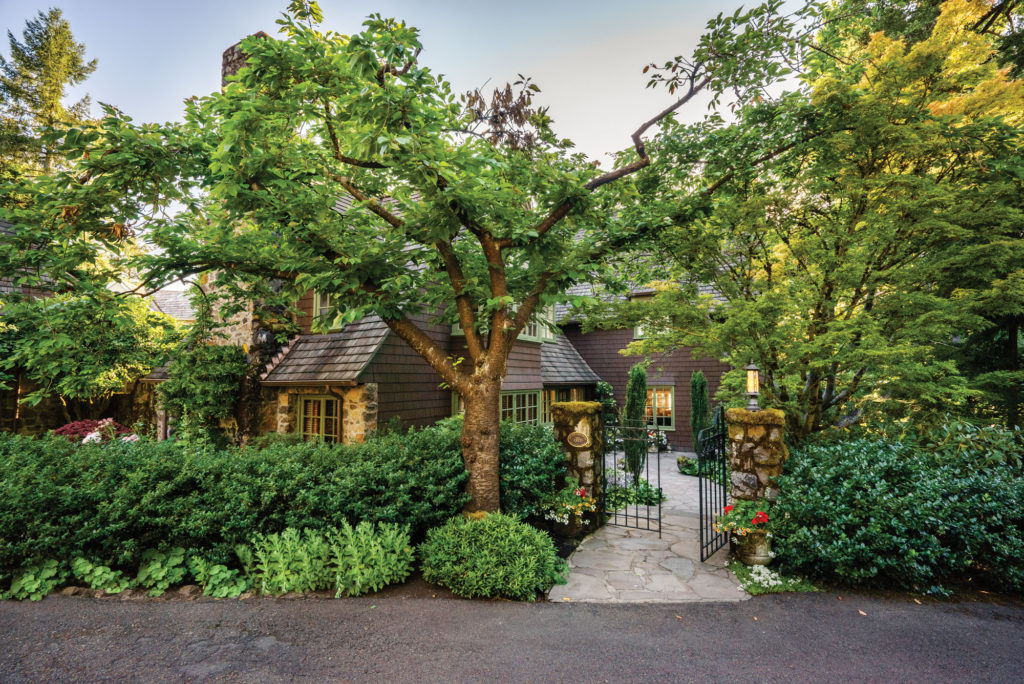 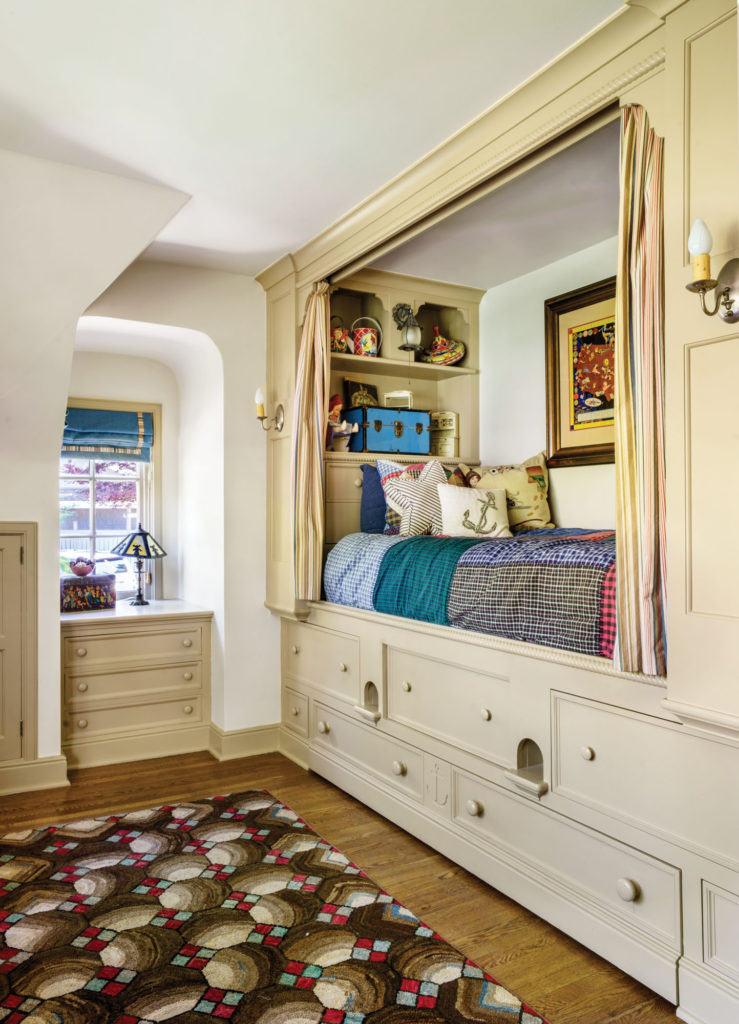 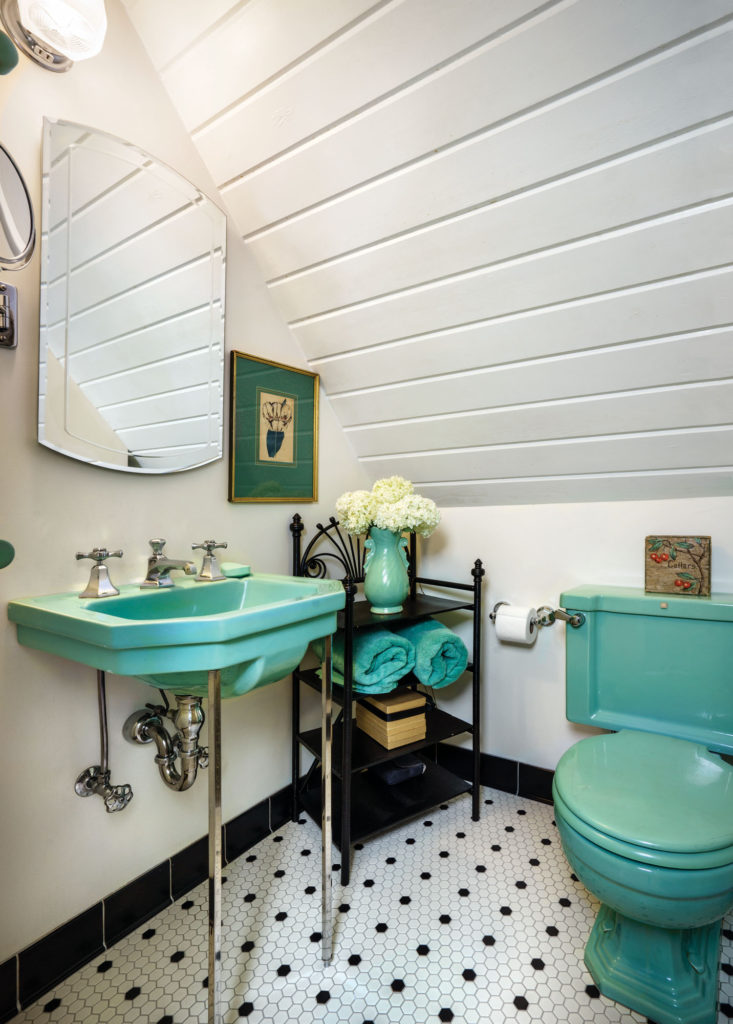 10 Charming English Cottages to Stay In