The son of artistic parents, Coviello grew up in Connecticut reading such authors of literary Naturalism as Emile Zola. “The style of certain 19th-century novels has always drawn me,” he says. “The very detailed descriptions of daily life, and the domestic surroundings in which their characters move, evoke a feeling I try to re-create for myself”—with a bit of Edith Wharton thrown in for good measure.

The four-bay house was built in a vernacular Greek Revival style in 1840; the Victorian porch came somewhat later. Originally the house belonged to a shoemaker who worked in his small shop next door. Two additions date to the late 19th century. When Coviello was house-hunting 20 years ago, this was the first property he looked at. He says it met all his requirements, the main one being that it was “spared from vinylization in the 1960s.” Nothing too ghastly had happened to the interior.

The house is painted in Coviello’s preferred ocher, accented with black shutters. He has replaced the dilapidated asphalt roof with cedar shakes, and upgraded the picket fence to cedar as well. With the help of a good restoration carpenter, Gabe Shaftlein, Coviello rescued the living room’s Greek Revival mantel, which had been stored in the barn. Shaftlein skillfully reworked it to fit the fireplace added sometime in the 1920s. He also made the built-in bookcases with pilaster details to match the style of the mantel. 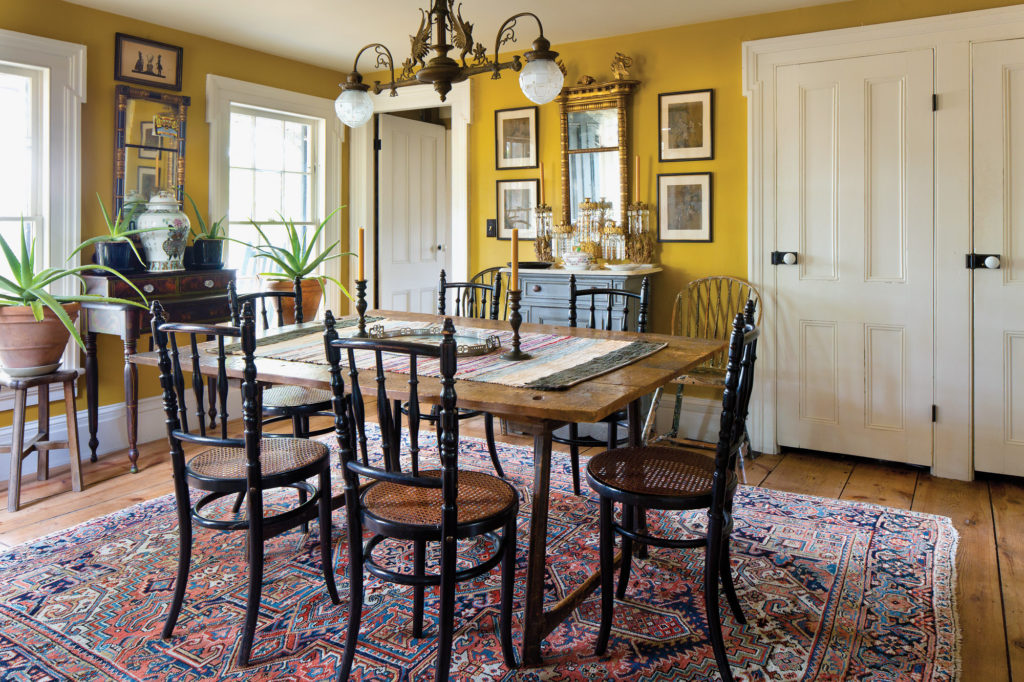 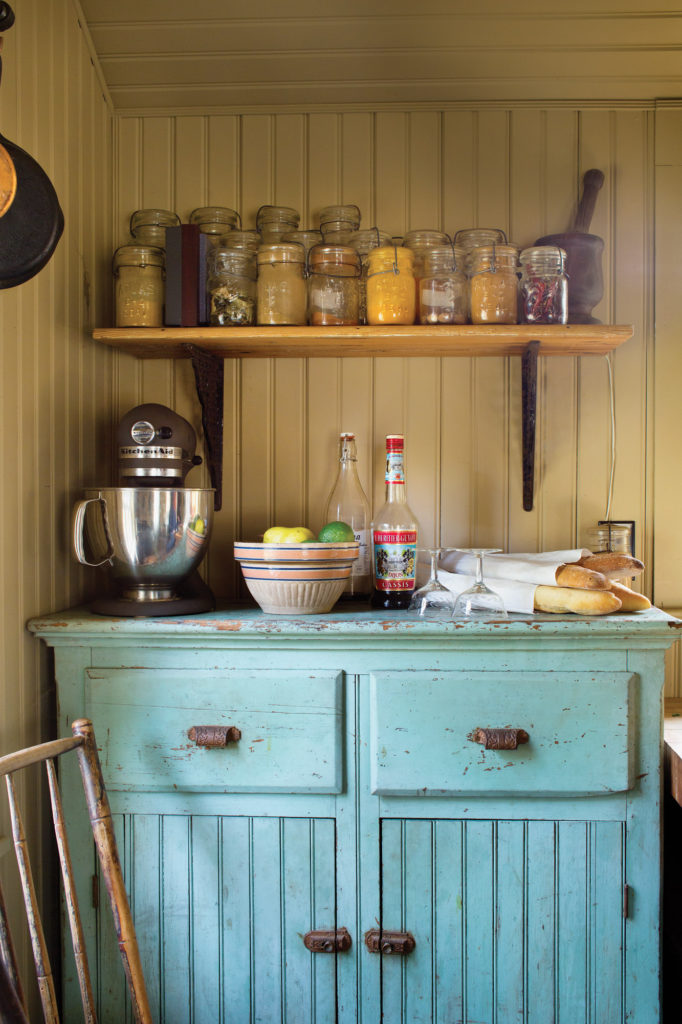 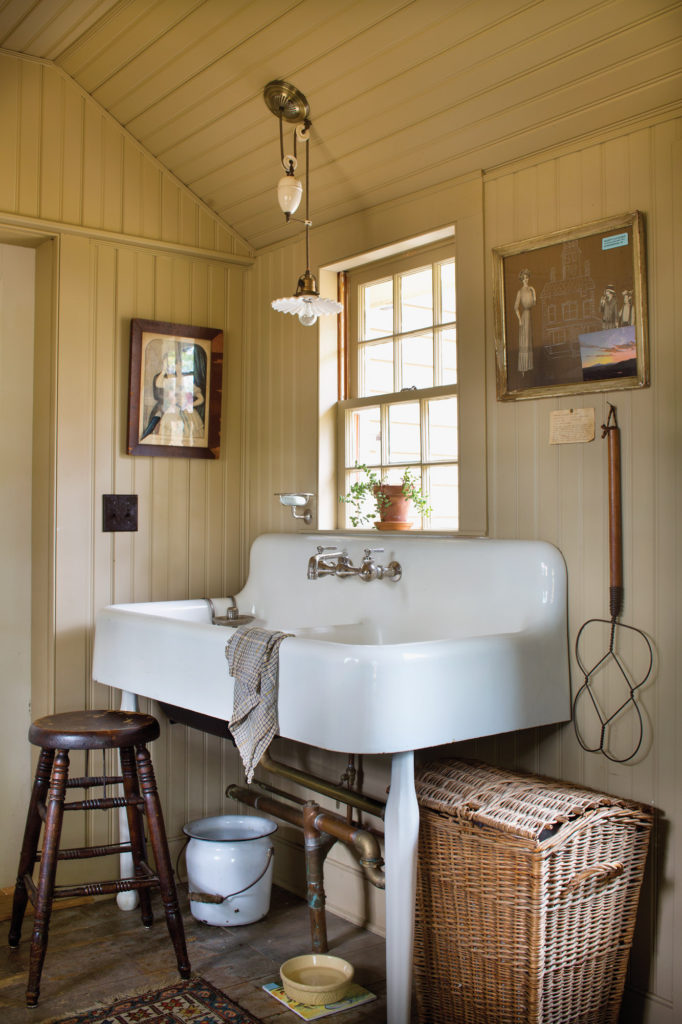 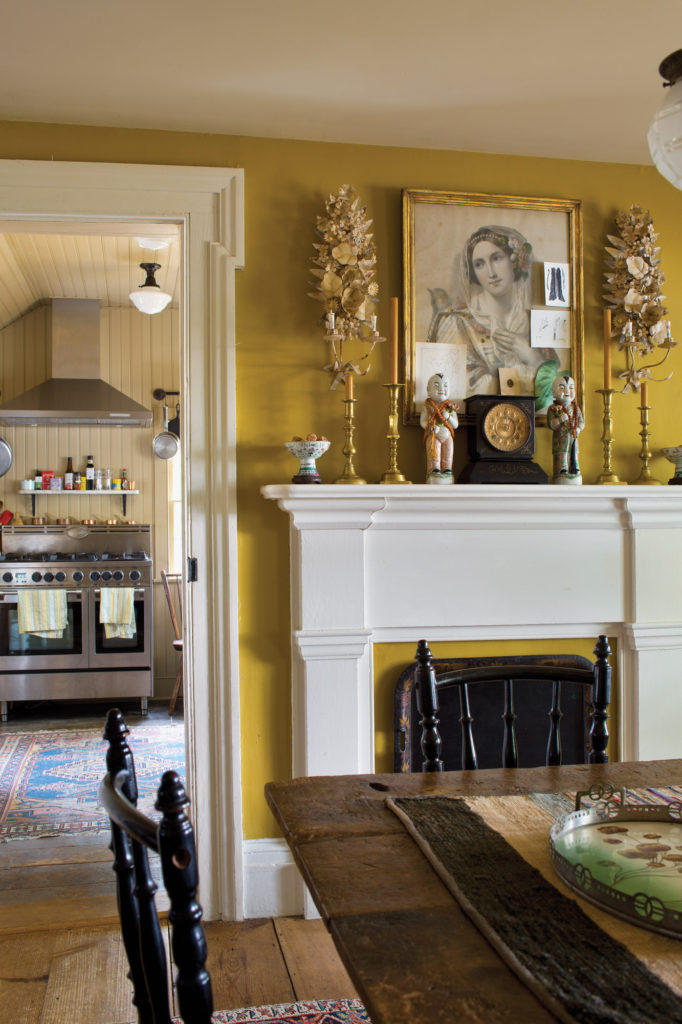 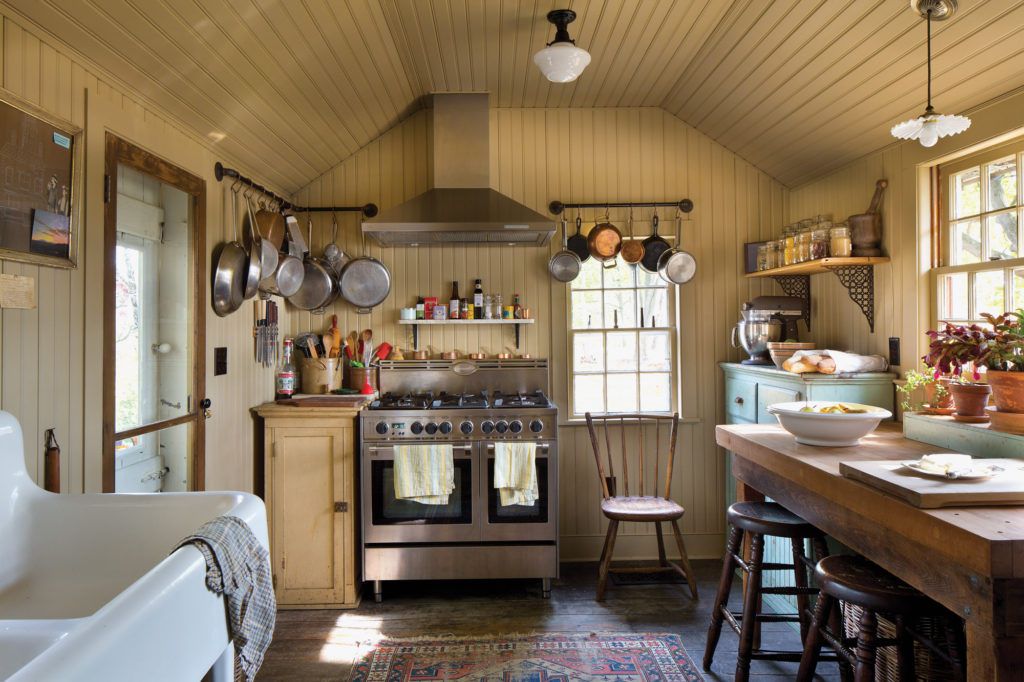 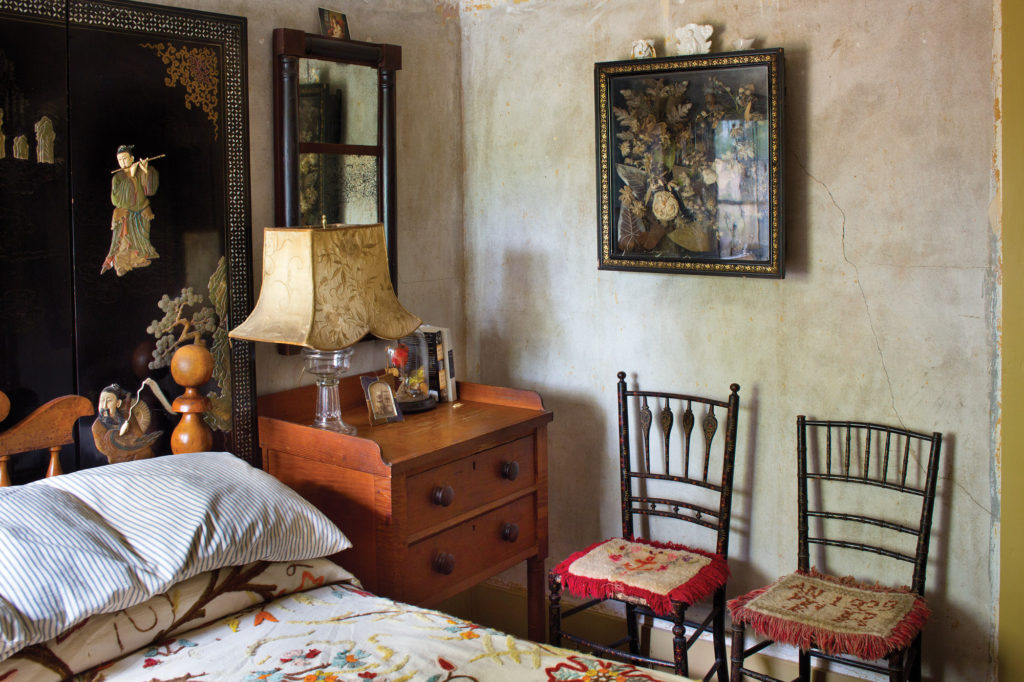 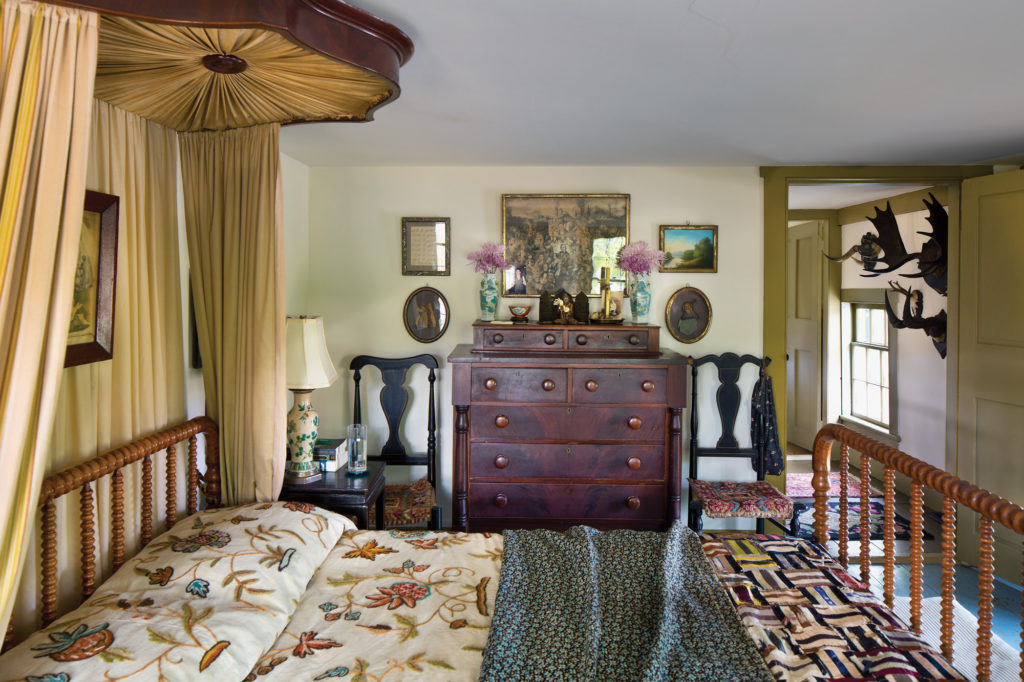 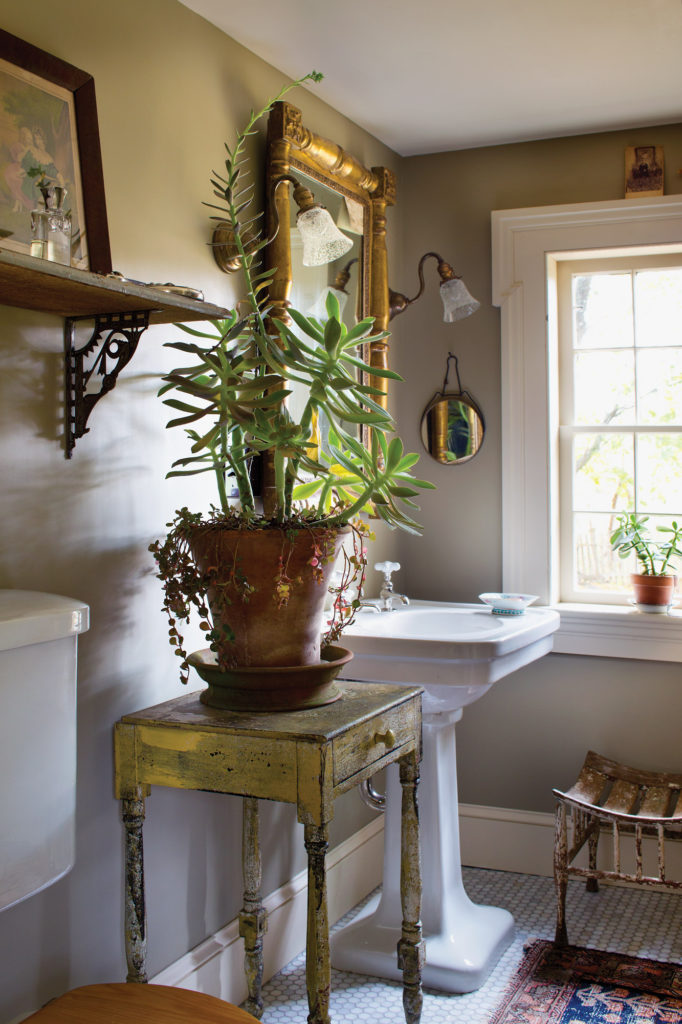 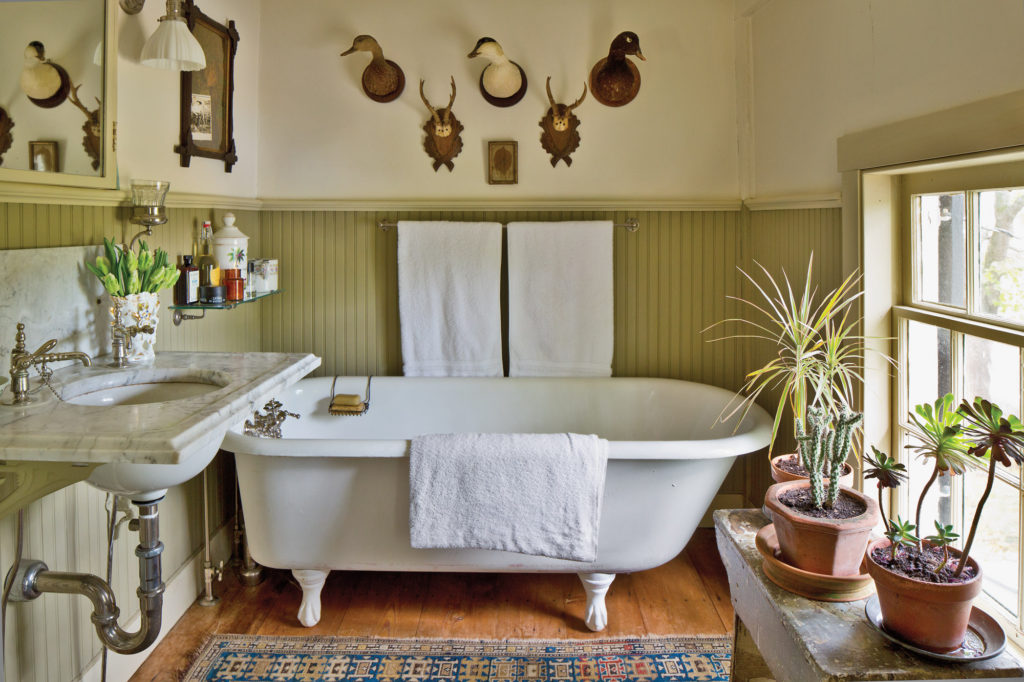 In tackling the kitchen addition, which was last remodeled in the 1950s, Coviello decided to gut it and raise the height of the 6 ½’ ceiling. He added the 19th-century beadboard to walls, and used old-fashioned, stand-alone cupboards instead of cabinetry. Painstakingly, he unearthed the blue-painted wood floor that had been buried under three stubborn layers of resilient flooring and plywood. Coviello sorted out plumbing that dated from the 1930s, updating the system, even coming up with inventive ways to incorporate vintage bath fixtures (found at salvage yards) with the new plumbing.

The kitchen addition attached to the main house was last remodeled in the 1950s. Coviello gained space by lifting the low ceiling and replacing cabinets with unfitted furnishings and shelves.

Furnished with velvet-upholstered couches laden with cushions, gently worn oriental carpets, framed mirrors, and talismanic objects from his far-flung travels, the rooms reveal an aesthete’s deep delight in the luxuries of the past; the interior is, Coviello says, “ a cocoon for my spiritual essence.”

He’s added lacquered Coromandel screens, Old Paris vases, Chinese porcelain, and girandoles with big glass drops. In a bathroom, spiky antlers and taxidermy co-exist with soothing plants in big, terra-cotta pots. Pictures hang over mantels, with faded notes and cards tucked into the frames. Rooms are deeply layered, maintaining the fiction that this was all built upon the accumulations of generations. The eclectic mix is a truer evocation of reality than an academic purity would be. At the same time, it feels like a return to the neo-Victorian decorating trends of a generation ago.

Born with a sixth sense for scoping out interesting finds, James Coviello began collecting when he was 12 years old. A habitual shopper of flea markets and auctions, he has treasure-hunted in Paris, London, China, and Peru—as well as in the Gowanus neighborhood of Brooklyn and in Hudson, New York. He’s selectively chosen quirky items along the way, including a dozen cuckoo clocks he picked up for next to nothing, which hang on one wall. A 19th-century, dragon-embellished chandelier found in Lima was a must-have, and somehow fit in his suitcase.

Besides gleaning decorating ideas from old novels, Coviello visits historic-house museums for study. “The first decorating style I really recognized was Aesthetic Movement,” he says. “For me, it has all the bells and whistles: It’s dark and Gothic, stylized, ebonized. It is aesthetic sophistication—the opposite of what I call Abraham Lincoln Style… that 1860s American look with big globe lanterns and crystal chandeliers, a stuffy White House look.”

Small details are often overlooked in restoration, but not by James Coviello. He uses only old, period glass to replace broken window lights, buying old windows as salvage so that he has the glass on hand. The plumbing fittings of a vintage bathroom sink have been nickel-plated.

“I’ve made it my life’s mission to seek out interesting and beautiful objects. The care is telling,” he says.