For this neat white-clapboard house with a blue door and irises abundant, little has changed since 1840. Its state of preservation seems remarkable—we are not all that far from New York City. But the farmhouse has never been modernized, and thus has not been subjected to the disruption that comes from adding bathrooms, a great room, or decorative excess. In fact, with the potbellied kitchen stove currently disconnected from its chimney, the house has no heat.

Yet original plaster-on-lath is in excellent condition. So are the lyrical staircase and all the doors and trim; the old pine floors are tight and smooth. “For two years I read the New York Times country-property listings,” Jack McGroder recalls. “I just read them; I never made a call or went to see anything. Then one day I came across ‘1840 Greek Revival/mountain views’ and I thought, ‘This is ridiculous: I’m going to see it.’ Only house I looked at. It was love at first sight.” 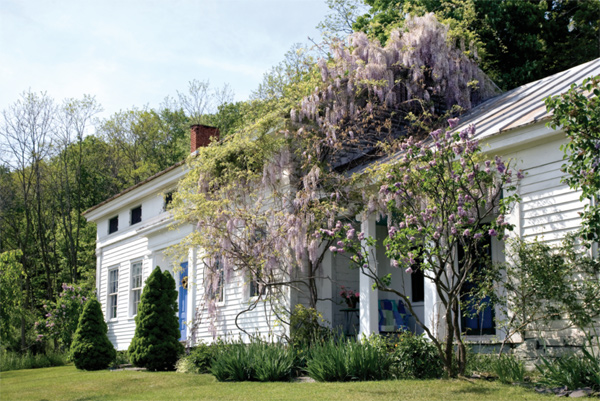 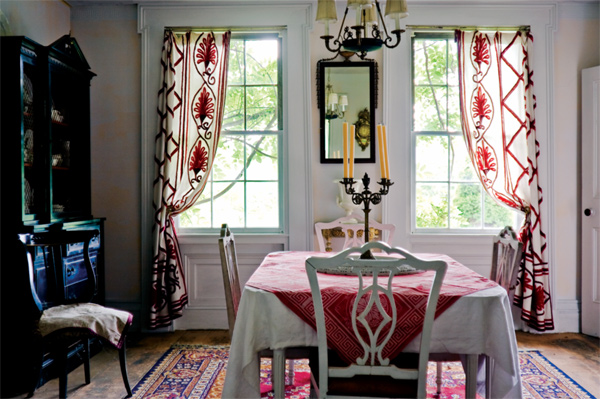 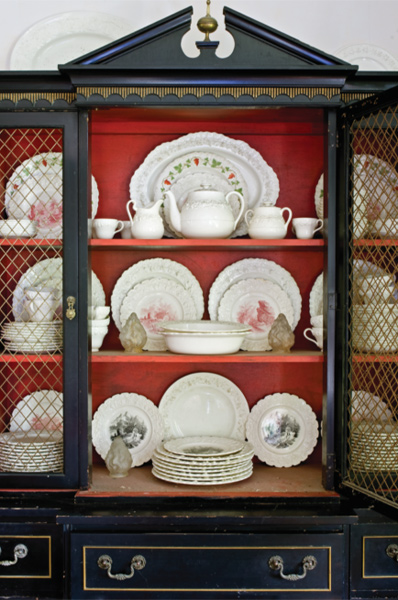 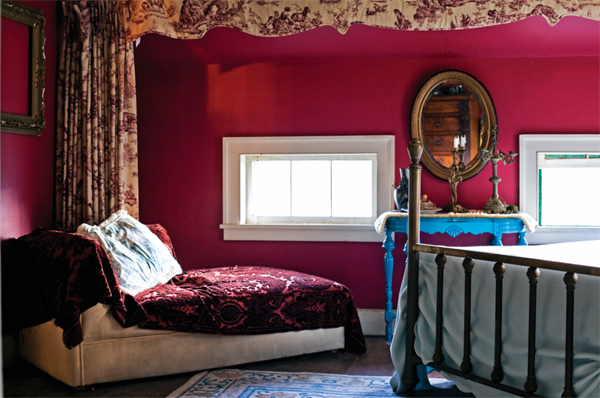 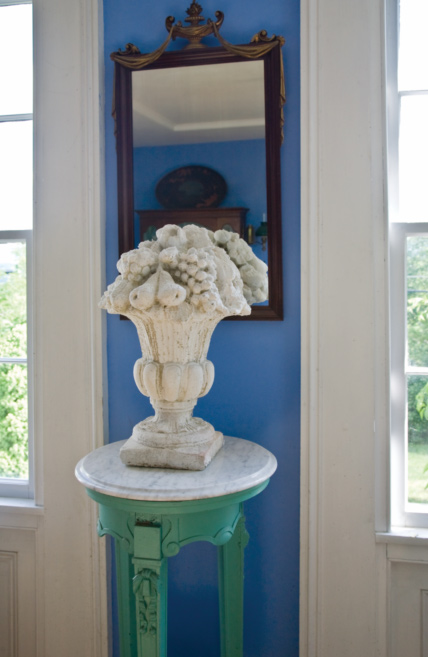 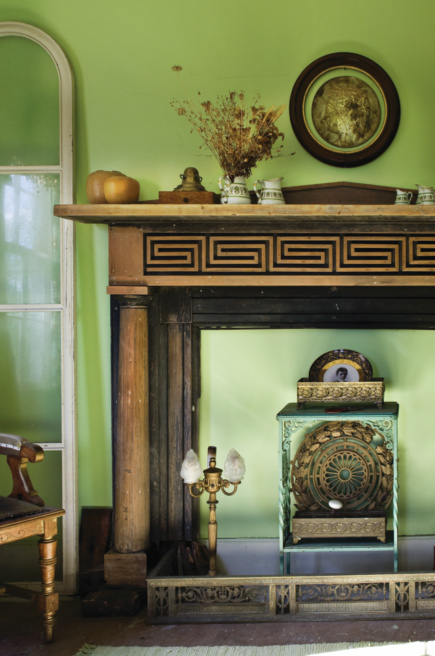 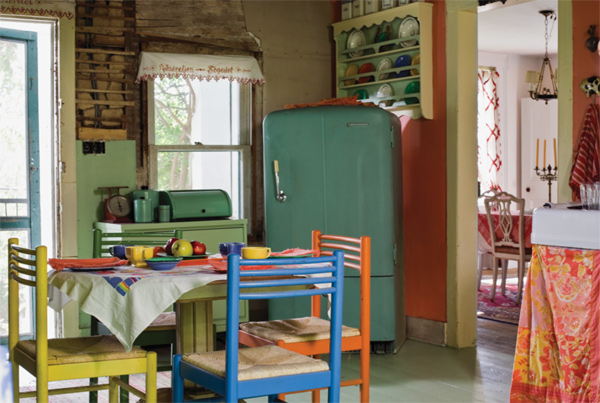 Back in 1990, Jack recalls, the house was surrounded by waving fields of grain—rye grass, grown to three feet tall. “I didn’t mow it for a couple of years, it looked so good.” He planted the wisteria, which took five or six years to bloom and now worries him with its weighty presence. So far no damage is evident (“I think it’s just lying on the metal roof, not invading”) and after each spring display, he can’t bear to cut it.

Inside his summer-only house, “I wanted a classical look, but not all the way with formal Empire furniture,” Jack explains. “I find things that give an illusion—I don’t have a lot of cash.” His bits and pieces have come from flea markets, salvage yards, Dumpster dives, even an iron shop in the French Quarter of New Orleans. And he went to an auction, once. “I wanted those torch sconces [now in the dining room]. Bidding started and my paddle went up. I had no willpower.”

The interior sparkles, regardless of budget. The kitchen has a salvaged wall cupboard, filled with Wedgwood china, perched on a chest. It and the little rush-seated country chairs got new life painted in the colors of Homer Laughlin’s ‘Riviera’ dishware, another collection displayed in the kitchen, which also inspired the painted floor.

Curtains in the dining room, which is currently between paint colors, have chenille embroidery in an anthemion pattern, very Greek. The curtains were a lucky find at the 26th Street flea market, “back when they had the parking lot.” The broken-pediment china cabinet in the dining room cost $150 at an East Side thrift shop. Jack painted its interior Pompeii red.

Classical inspiration, too, led to the formal paint colors. The saturated blue in the parlor comes from the strong blues of Wedgwood china. Then Jack painted the entry hall and staircase wall aqua as a complementary lead-in: “I seem to recall that Benjamin Moore called it something like ‘Greek Temple’ in the ’90s, and that clinched it,” he says.

More daring is the chartreuse-y green chosen for a long room (probably built as three small support rooms) running the width of the house to the rear. Jack McGroder has always had a developed sense of color. He trained as a fine-art painter, later ending up in scenery and costume design, starting as a dresser for City Opera. He’s been at Radio City Music Hall for many years, as a wardrobe supervisor now—specializing in shoes.

“Think about it: hundreds of people, each with seven or eight pairs,” he says—shoes custom-colored and hard-working. (He also personally sewed all the white collars for the Rockettes’ Santa outfits.) Indeed, his attention to detail comes through in the house.

The mahogany stair newel, with a scroll or lyre design, is particularly fine for this vernacular house. Always on the lookout for another like it, Jack says he’s seen only one that is similar, in a South Carolina house restored by Dick Jenrette. [See Adventures with Old Houses, Wyrick & Co., 2000.] Perhaps the carpenter chose the design from a pattern book.

Upstairs, bedrooms are intimate, with sloping ceilings and small frieze windows set in the low walls. In one, the wisteria blocks the view: “Just like for Miss Havisham, the outside world doesn’t exist,” says Jack. He bought the bedroom’s impressive set of toile drapery panels and valance years go, in a Columbus Avenue shop, for about $30. Hung to graze the floor from the sloped ceiling, they create a nook within the room, and inspired the fuchsia color of the walls. French Victorian cut velvet—probably from a porti`ere—covers a chaise. The substantial brass bed is one Jack slept in as a child, on the porch of his grandparents’ summer place near Niagara Falls. It had belonged to his great-great-uncle.

Preservation, rather than renovation or even restoration, is apparently in store for the future, too. Commenting on the mantel leaning against a wall, the missing wallboard in the kitchen, Jack McGroder says: “I do things to a certain point, then look at it as a set piece, I suppose. I squint, it looks good; I can’t obsess about what’s not done.”