When Jill Chase found the home where she and Bill Ticineto live in southern Connecticut, she liked the house but was more enthusiastic about the land, about an acre that sloped gently down to a picturesque pond. The house, at least 90 years old, had some period charm, but it generally lacked a defining style. It may have been a caretaker’s cottage moved from a property nearby. “We had an architect come look at it,” says Bill. “He called it ‘higgledy-piggledy’.”

Since moving here over 15 years ago, the couple have gently nudged many of the plainer aspects of house toward the Colonial Revival style. Through it all, they’ve always considered how an element in the house or garden would have looked had it been done when the house was new. 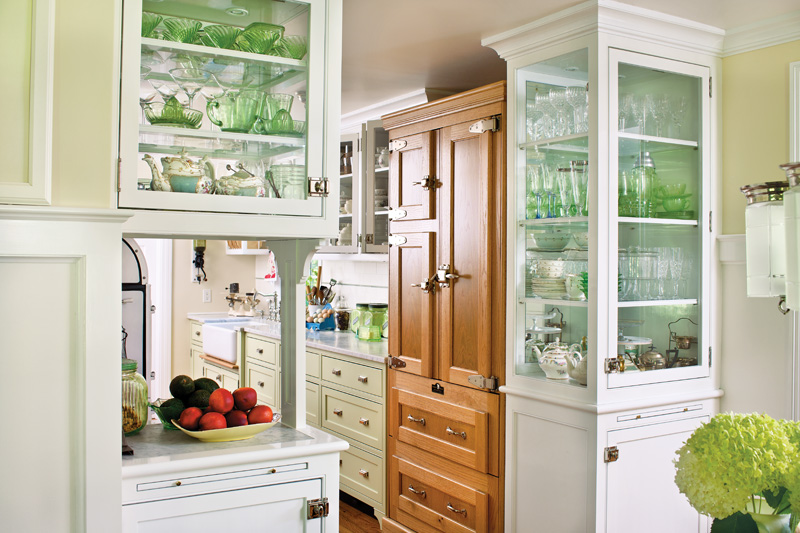 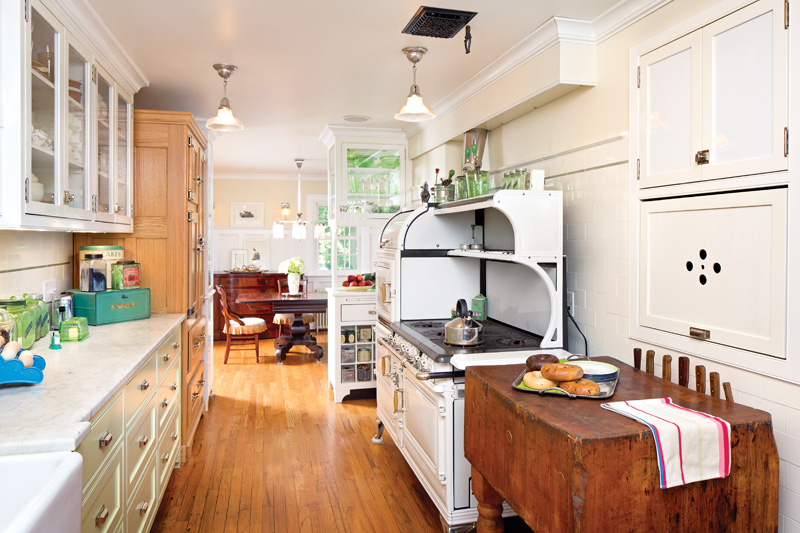 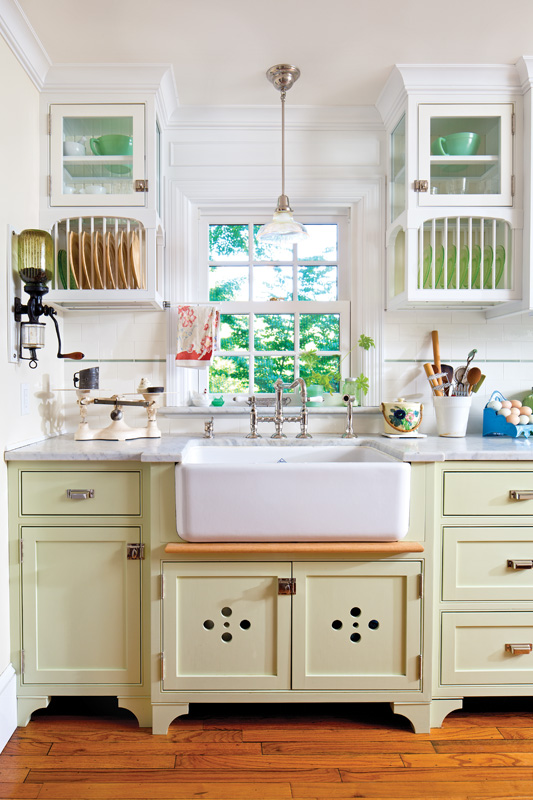 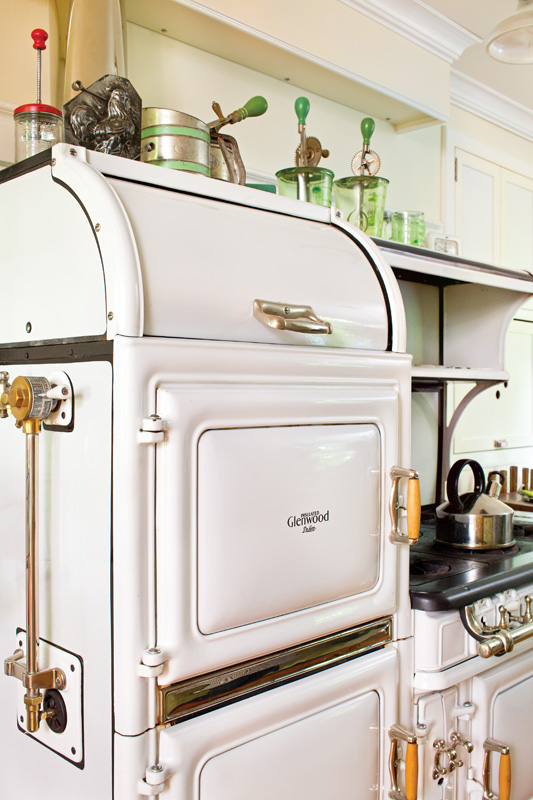 The most noticeable change is a step-back addition for an office wing (Bill and Jill are graphic designers who work at home) with a dramatic Palladian window at one end. A close second is the large verandah that ties the addition to the main house, creating architectural character and helping it merge into the landscape. “The porch is really where we live whenever the weather is good,” Jill says.

The landscape has changed even more dramatically. To help screen the house from the sometimes busy street, they added a raised terrace that is the setting for a bocce court. (They call their place “Bocce Hall.”) The terrace is supported by an impressive stone wall that Jill built by hand of dry-laid stone, using reference materials and trial and error as her tutorial.

In the backyard, they built two facing pergolas overlooking a frog pond graced with a water-spouting amphibian. Bill and Jill conceived and constructed most of the garden elements themselves. Not all is gracious formality: the backyard grows wilder as it wends toward the pond, and Bill and Jill have a moveable chicken coop with six resident hens, all named for P.G. Wodehouse characters. “A couple of my girls are in ‘henopause,’ ” Jill says—“they don’t produce eggs.” 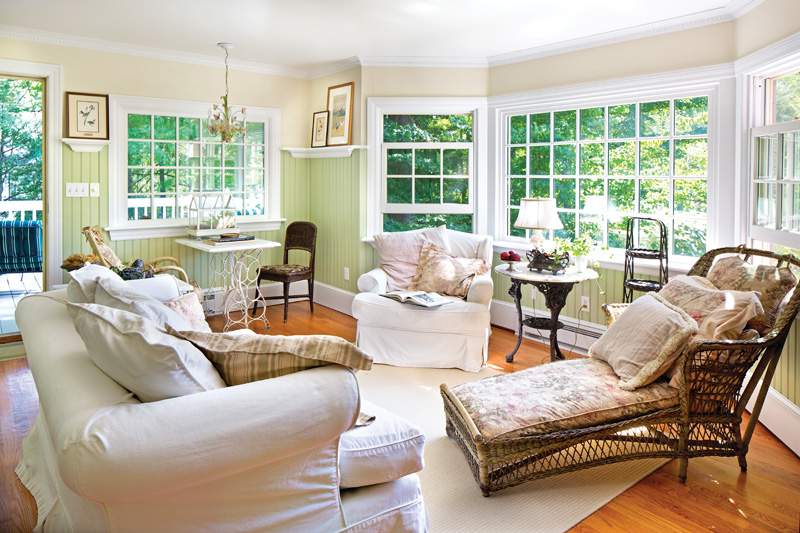 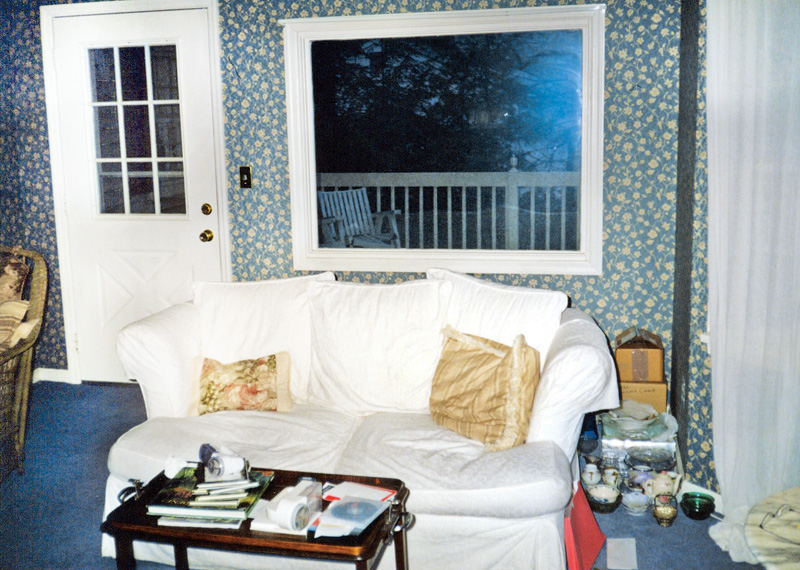 Indoors, the showstopper is undoubtedly the galley-style kitchen, which the couple envisioned and built with attention to the smallest details. The end cabinets, which create a transition to the dining room, are backlit to play up a collection of uranium or Vaseline glass. The sculpted feet on the cabinets are attached by magnets so they can be removed for easy cleaning. There are even rollout drawers tucked away in the toe-kicks. “There’s no wasted space in this kitchen,” says Bill, who built all of the cabinetry in his well-used workshop.

Wanting a clever pattern for vents in the doors under the sink, Bill hit upon the idea of using four circular cutouts in a diamond pattern with a smaller hole in the center. “When you play bocce,” Jill explains, “you use four balls and there’s one little ball.”

Bill and Jill scoured the internet along with old books and magazines to seek out the kinds of appliances most typical in the 1920s. When Jill fell for a hard-to-find style—a vintage two-oven, six-burner Glenwood Deluxe SNJ—they searched until one turned up on eBay. Bill and Jill took their prize to David Erickson of Erickson’s Antique Stoves in Littleton, Mass. All of the old nickel was removed and replated, the enamel gleams once more, and the interior works were brought up to modern code.

Wondering what to do about the refrigerator, the couple discovered that other old-house owners had hidden the fridge beneath an icebox façade. “The scale on new hardware we saw seemed wrong to us,” says Bill. “So we assembled salvaged hardware until we had a full set.”

Bill shipped the old nickel hinges and latches off to Erickson for replating. Together, the couple looked at vintage iceboxes in antiques stores and at swap meets, and sifted through magazines published in the 1910s. They were especially impressed by old designs for refrigeration units from the McCray Refrigeration Co. of Kendallville, Indiana.

Ultimately they settled on a five-panel design that fit the side-by-side Liebherr refrigerator they’d ordered. “You’d never know a 21st-century refrigerator is underneath all that oak,” Bill says.

As much as possible, they’ve furnished their property with antiques—the living-room sofa was made in Boston in the 1830s—while many of the garden furnishings are vintage pieces picked up in unexpected places. “I go to the town dump,” Jill says, “and I come home with more than I brought.” 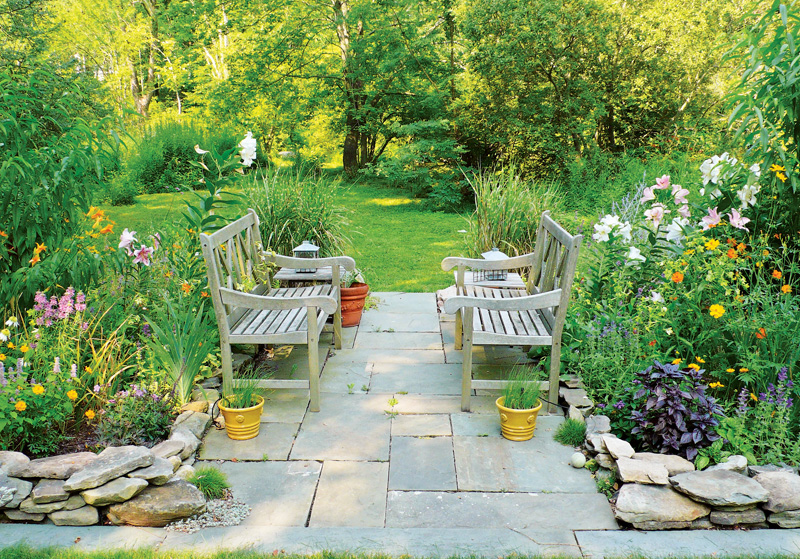