Surviving since colonial days, the Hall Christy House is a vernacular Dutch dwelling built in 1747. Lynne Denton had wanted the house for years, and finally got it when a club acquired the property but had no interest in the structure. Even after the sale was underway, years went by before the building could be dismantled, moved, and re-erected in New York’s Hudson Valley. Lynne and Kevin Denton sited the house in the middle of the field rather than at the roadside, in anticipation of gardens and a long approach that would leave the modern world behind.

“We found the house without its ‘Dutch kick’ or flared roof overhang,” Lynne says, “but I knew it had had one. Sure enough, when the carpenters dismantled the house, they found an original rafter, which we used as a template for the overhang.” Wasting nothing, holding on to the dynamic history of the house, the Dentons repurposed that old rafter as the handrail for the cellar stairs. Roofs were redone in cedar shakes. The siding reproduces the original riven-oak siding, but in cedar. Boards are all hand planed, and rose-head nails were placed over modern nails used during reconstruction.

Like most old houses, this one had evolved. An addition was added around 1760, with a large room downstairs, a buttery connecting parlor and dining room, and a master chamber upstairs. Today the downstairs room—a multipurpose large room or grootkamer—is the formal dining room. Window sashes were meticulously reproduced with the original profiles, and refitted with the old glass. (One pane in the dining room is etched with W H, for first owner William Hall.) 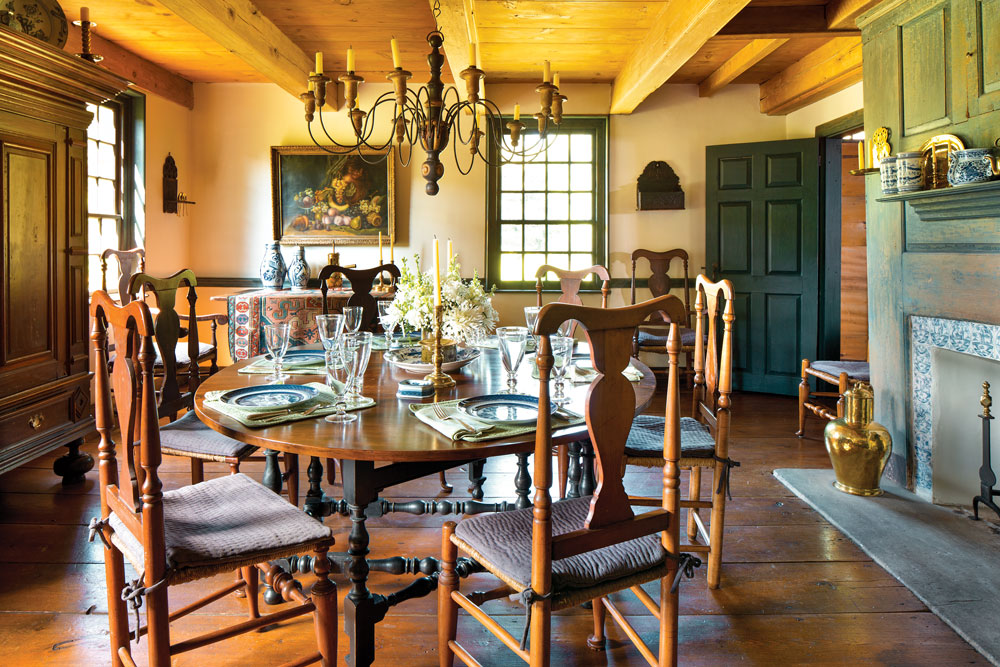 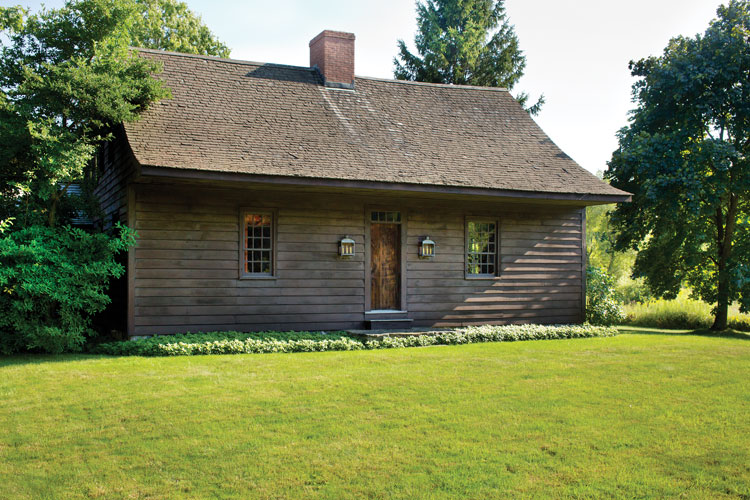 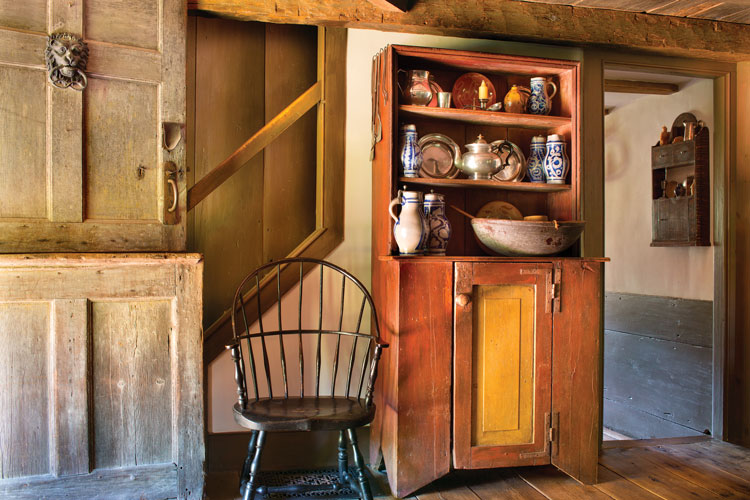 In the late 18th century, a recycled keeping room was bolted with iron straps and pins to the 1747 section of the house. The space used as a kitchen was added in the early 19th century. The Dentons added five feet to the kitchen, using locust wood posts salvaged from a later porch.

The Dentons knew they would need authentic parts for restoration, and so they acquired the 1750s Skidmore House, an old gambrel. The restored shell became a garage below, and a guestroom and potting shed above. Floorboards were salvaged for use in the kitchen and library of the Hall Christy House. The gambrel house also supplied the fireplace for the keeping room. When the Dentons added a boxed (closed) back stair up to the second-floor hall, they lined it with sheathing from the Skidmore House.

A dogleg staircase from the 1747 parlor to the loft is original. “There was a trap door to the loft,” Lynne says, “but the building inspector would not allow it.” The loft area above now holds a bedroom and a bath.

Jars displayed on the closed back stair were made at the Wingender factory in New Jersey in the 19th century; the makers hailed from Westerwald, Germany. Furniture in the living room reflects 45 years of collecting. A black Windsor chair came from Maine; a cherry wingback chair with fluted legs from the Hudson Valley. The dining-room table is a reproduction of one at Van Cortlandt Manor. The Dutchess County (N.Y.) kas or large Dutch cupboard, still in its old stained finish, is unusual for the stop-fluting on the sides. The chandelier is an 18th-century piece from a tavern in Fishkill, since razed. The hanging candlebox dated “1806” is from Greene County, New York. Delftware (antique, found in Amsterdam shops) and most of the brass is Dutch.

A modest kitchen was built in one corner during restoration. The partial wall with a pass-through is meant to look like an old tavern room. (Plumbing added for the bathroom above hides in the upper wall portion.) The wood lintel over the cooktop came from one of the old firebox interiors; building codes had not allowed its reinstallation during reconstruction. The kitchen’s cherry countertops were made from large boards found stored in the attic. 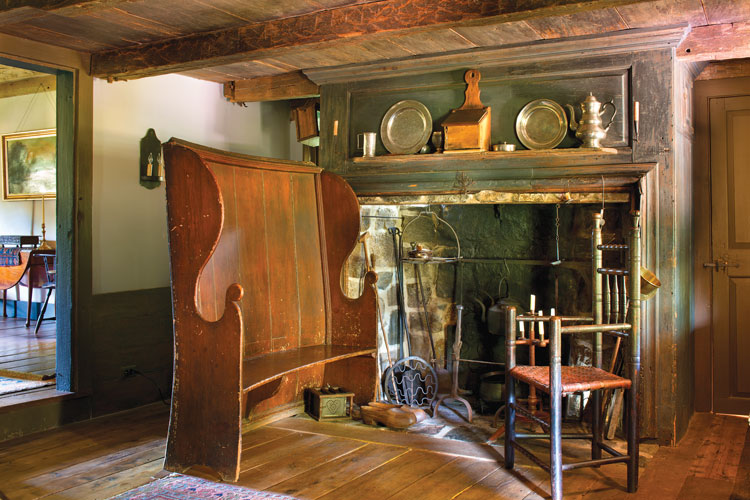 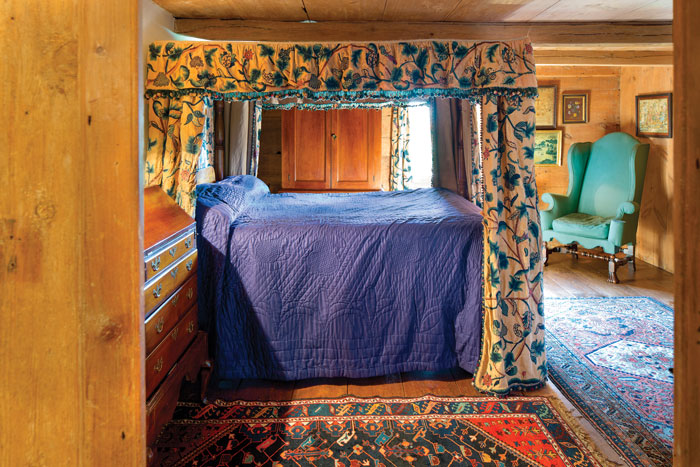 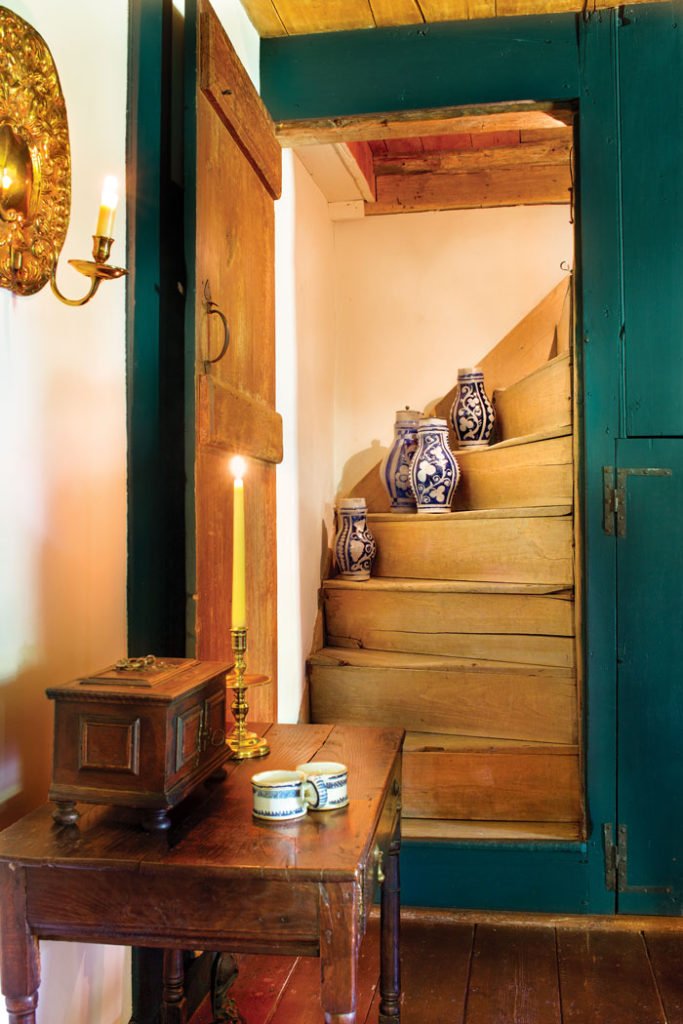 Lynne wanted the garden plan to reflect the interior spaces of the house. With modifications over the centuries, the house had step-ups and narrow hallways. Lynne took that arrangement and translated it for the landscape, using brick and stone walls and wood fences, paved walkways, and patios to create room-like spaces, albeit with more sunlight than the ancient rooms admit.