Mid-century Modern is not one style; instead it describes a design movement of the middle decades of the 20th century. It often refers to the postwar era, ca. 1945 to 1965, but, in many discussions of architecture, antecedents are included, moving the time frame back to the 1930s or even the 1920s. MCM comprises several house types and styles. The importance of this period is magnified by the sheer number of houses built as the country rebounded from the Depression and World War II.

History professor George Marcus recently wrote a book entitled Total Design, Architecture and Interiors of Iconic Modern Houses. What’s on the cover? Not a house by Schindler or Neutra, Gropius or even Wright. No, it’s Greene & Greene’s Gamble House in Pasadena, an American Arts & Crafts exemplar built in 1908. Marcus’s lineup of iconic modern houses starts with the Prairie School and work by Charles Rennie Mackintosh—that is, proto-modern houses, followed by those of van der Rohe, Saarinen, and Aalto. In her updated A Field Guide to American Houses, Virginia McAlester broadly classifies Prairie and Craftsman houses as “modern” architecture. The link has been made, a continuum established.

The genesis of Mid-century Modern houses is easy to trace to the preceding Arts & Crafts movement and houses of the Prairie School. Substitute concrete for its carefully laid Roman brick, and plate glass for the leaded windows, and Wright’s Robie House is recognizable as a precursor of International Style. Arts & Crafts and American Modern styles share a dislike of overt historicism and ornamentation. The forms are low, the distinction between indoors and outside is blurred. Built-ins help assure that the interiors are uncluttered. A simplified hearth is the focal point in an open plan.

With a tremendous building boom starting in the 1920s, California was a hotbed for mid-century residential design. Important names include Joseph Eichler, a philosophical developer who brought modernism to family homes in the San Francisco Bay Area and Los Angeles. Architect Richard Neutra (who spent time at Wright’s Taliesin in Wisconsin) designed striking residences for the southern California landscape. More than 2,500 MCM houses were built in Palm Springs by one builder alone, who worked with prominent architects.

Mid-century Modern enclaves are found all over the country, however, many of them with architect-designed houses. The drawing at the top of the page, for example, is based on a house by architect Ralph Haver, who practiced in the Phoenix, Arizona, area starting in 1945.

What about Ranch houses? As developed by Cliff May as early as 1932, the California Ranch is a recognized style under the Mid-century Modern umbrella. The postwar ranch, the split-level, and the A-frame are forms, not necessarily styles. Many ranches embodied 1950s modernism, but others were “traditional.” The term Atomic Ranch is used for somewhat streamlined, space-age ranches with futuristic references and an embrace of new materials like plywood and laminates.

The best houses reveal what the lesser suburban houses were trying to emulate. Inspiration lies in amoeboid pools and generous patios, flat masonry fireplace walls and raised hearths, low-slung furniture, monochromatic carpeting, and open architecture. Restoration-minded householders are buying up Ranches and MCM houses (not all of them stellar examples) to remake them, with the gift of hindsight, to be better than they were. That’s just what happened with Arts & Crafts Bungalows. 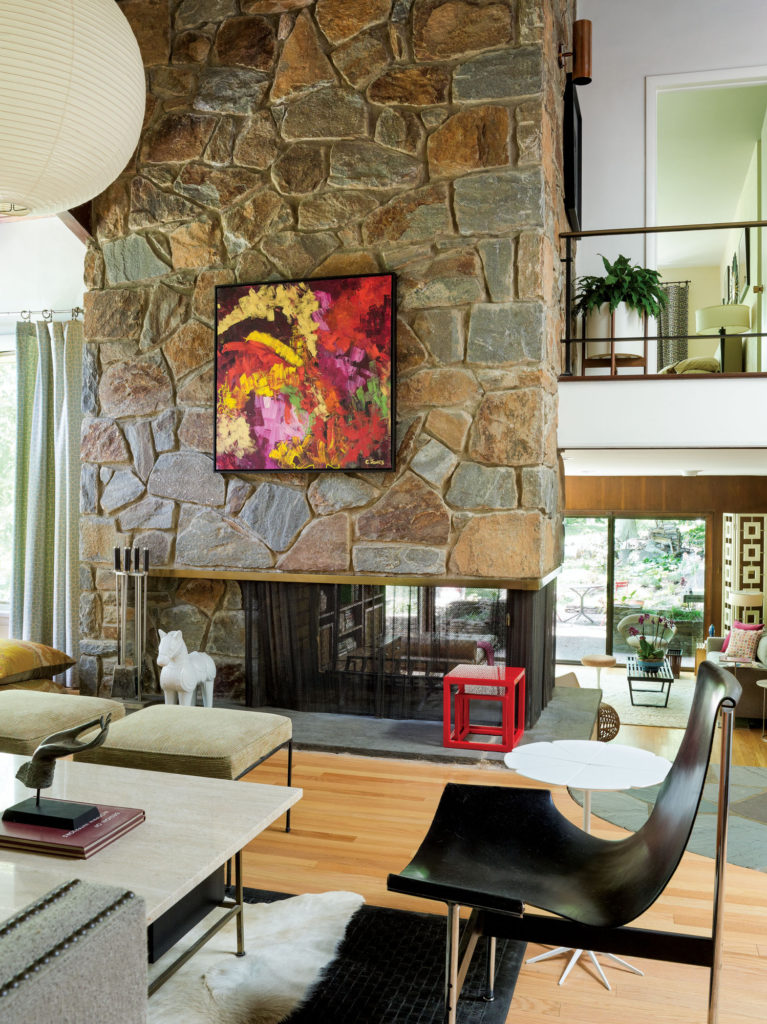 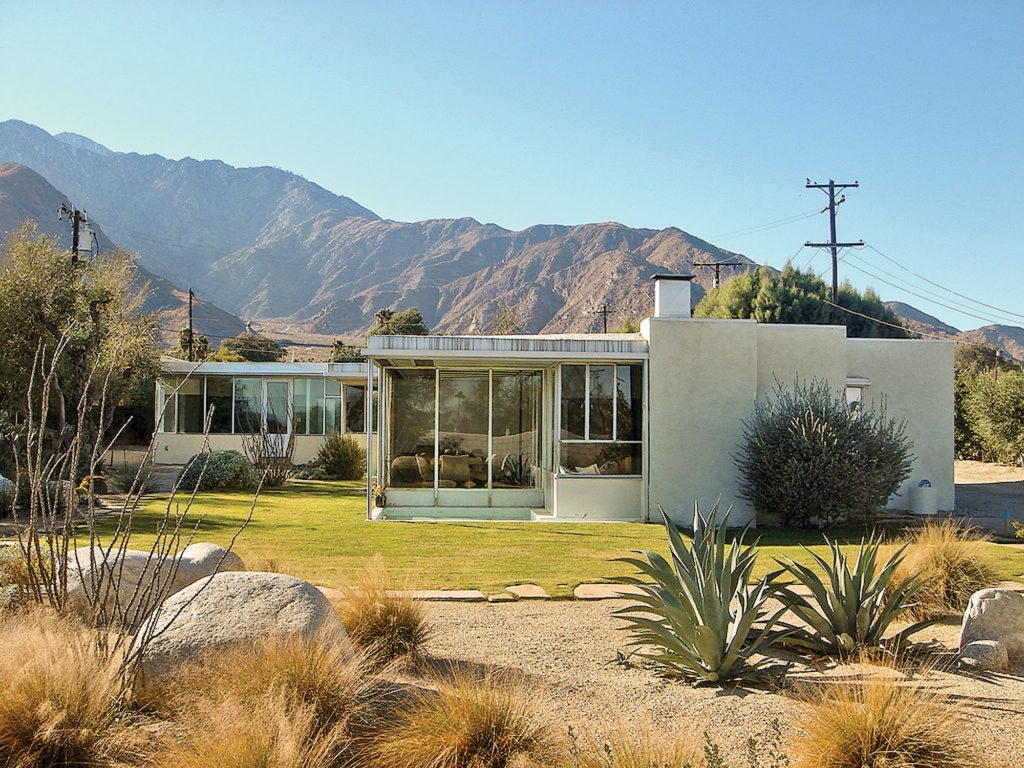 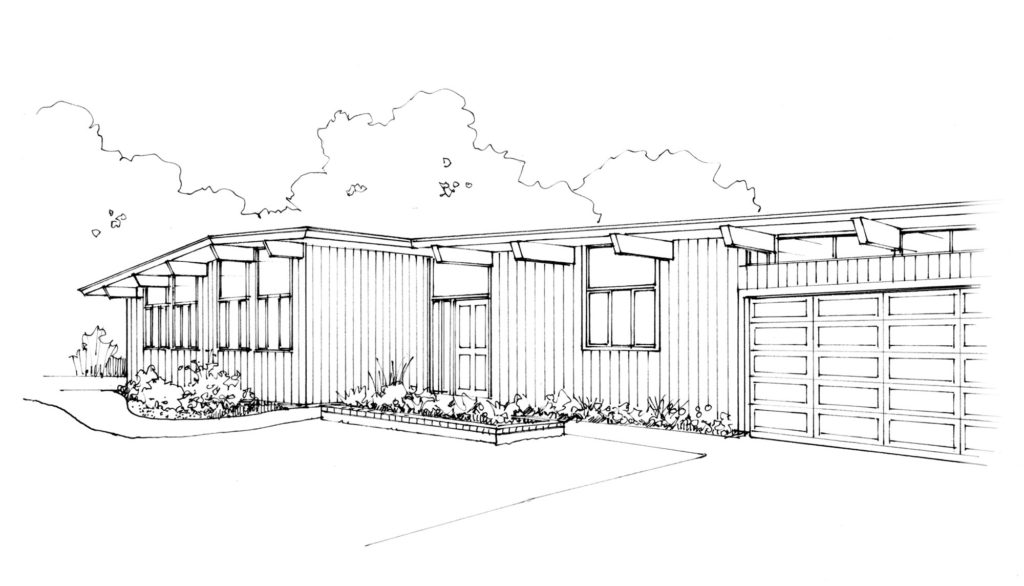 Modern Styles
Bypassing types such as the split-level, the ranch, and the A-frame, consciously Modern-design houses seem to fall into three broad stylistic categories by mid-century.

• GROUND-HUGGING massing and horizontal lines, seen especially in windows, follow the flat or low-pitched roof free of dormers. Tucked into the landscape, many houses appear to be one level. The sheltered entry is downplayed.

• LARGE WINDOWS and generous glazing are common: consider the glazed gable in Contemporary houses, the window walls and ribbon windows of International Style, and wide “picture windows” in suburban examples.

• DESIGN AUSTERITY, though most pronounced in the International Style, is apparent in Modern houses and even postwar ranches. Casings are absent or unadorned, no turnings are seen in porch parts, wall surfaces are plain.

• MODERNITY shows up in a more open interior plan, which often segregates the public area from bedrooms, and also in the adoption of such postwar materials as plate glass, plywood, concrete, and laminates.

Spanning 40 years and with so many houses, decorating is bound to be varied: academic, traditional, atomic kitsch. Today’s owners can choose from the best design of the era; start with the decade when the house was built. In the Forties, for example, traditionalists leaned toward French design; Modernists took a cue from Italian, Scandinavian, and British innovators. Some interiors have a sumptuous Hollywood feeling, while other houses are spare and austere with Modern furnishings. The Fifties and Sixties are familiar still, with their grasscloth, laminate countertops, and mosaic tile. Unadorned wood paneling and furniture might be pale (maple, beech) or dark (teak). MCM furniture is available as still-affordable antiques and as reissues by Herman Miller, Knoll, and others, with catalog companies such as Design Within Reach selling direct to consumers. Furniture by Bertoia, Breuer, the Eameses, Le Corbusier, Platner, Saarinen, and more remain in production.

MANY MORE RECOMMENDATIONS at oldhouseonline.com/modern-bookshelf