George Washington was seven years old in 1740, when the Porter family of Virginia built a one-room log cabin on a 300-acre plot just east of the Blue Ridge Mountains. Nine years later, Lord Fairfax, who owned most of the land in the region, employed 16-year-old George to survey the surrounding community. In 1795, this town would be the first of 28 in America to be named or renamed after the prestigious surveyor.

As Washington, Virginia, grew, so did the Porters’ family, and so did their little house. They added a second floor and then other small additions. In 1810, a two-story manor house was constructed next to the original cabin, and the two structures were connected. Even as much of the original acreage was sold off to neighboring farmers, the house was primarily under the ownership of two families, the Porters and then the Strothers, for two centuries. With the exception of a kitchen and living room add-on in 1990, most of the construction on this house dates to its first 70 years. John and Beverly Sullivan bought it, and the remaining 21 acres, in 2004.

John is the group publisher of The Atlantic, founded as The Atlantic Monthly (magazine) in 1857, and Beverly is a longtime collector of folk art, so it’s fitting they would love this house. Friends and grandchildren visit regularly, and the couple’s four rambunctious spaniels love the open space. Historic, graceful, yet unfussy, it’s the ideal family home.

Careful owners had assured that original elements were retained and the character of the house remained constant, despite additions, renovations, and practical updates that changed the house. (Still standing are three stone outbuildings.)

Rooms inside boast nine fireplaces, with some original mantels. A few are 20th-century “make-dos” that Beverly plans to replace: “We’re on the lookout for two identical or similar period mantels for adjoining parlors in the 1810 manor portion.” One of her favorite features in the house is the 12′-wide hallway, with original wide pine planks for flooring, which runs adjacent to the parlors and up the stairs. 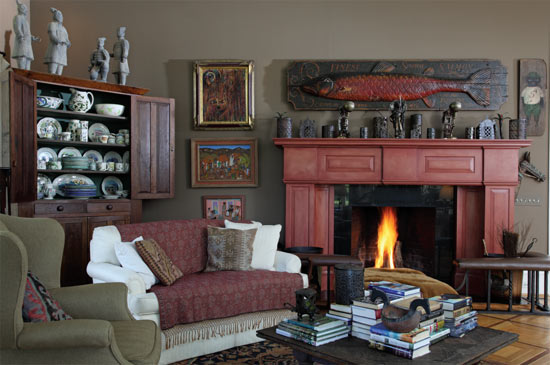 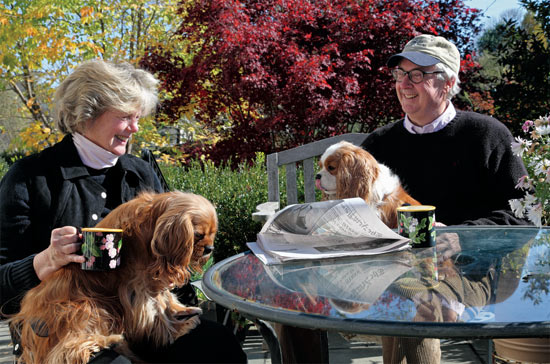 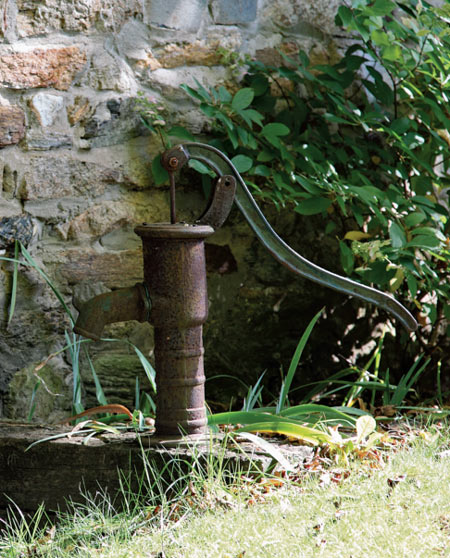 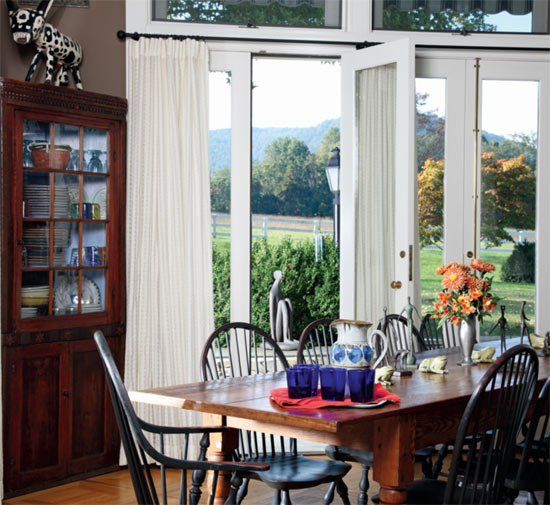 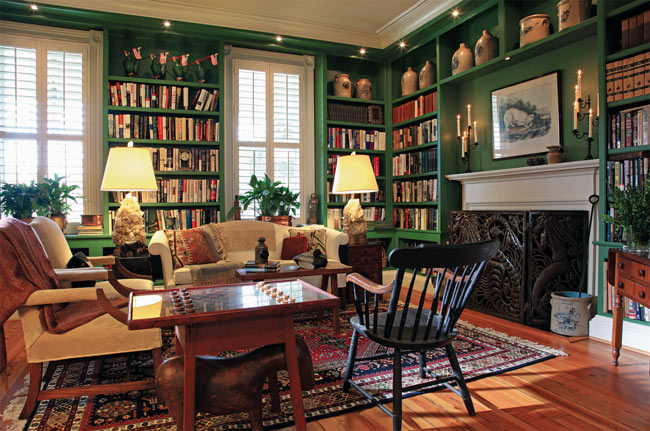 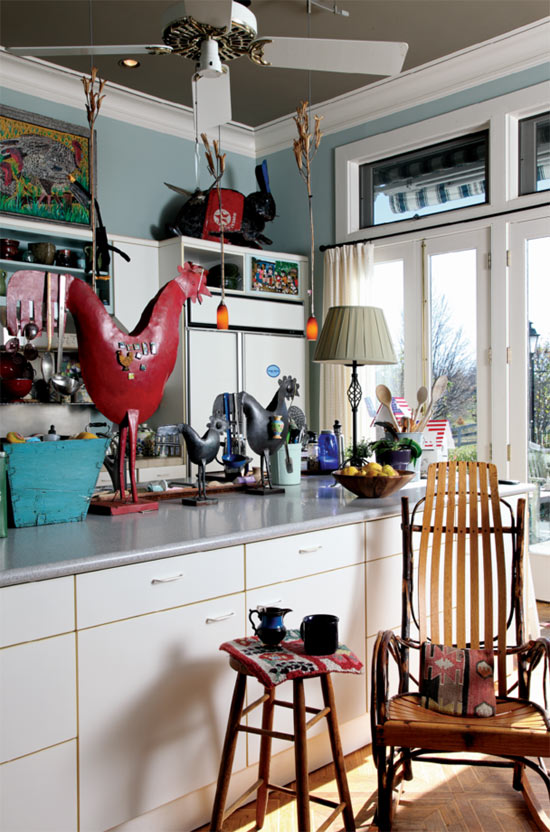 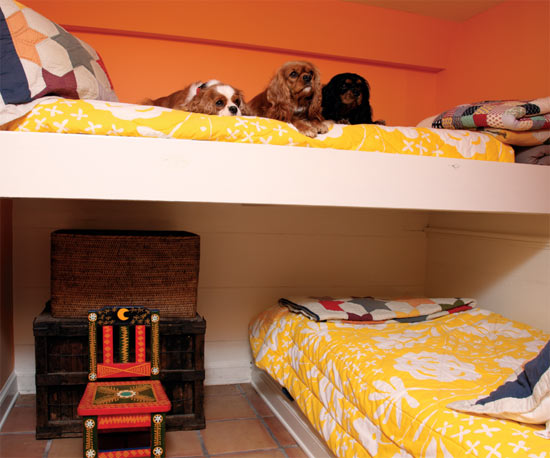 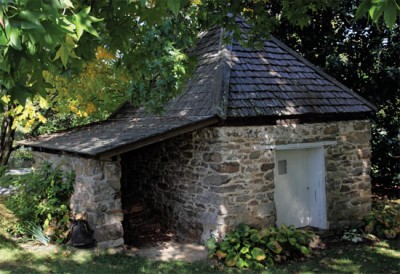 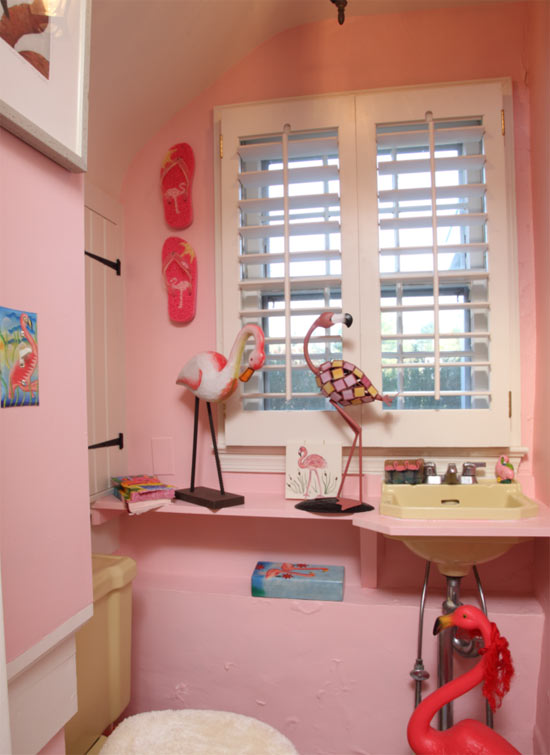 Old orientals cover wide-plank pine floors original to the 1810 section of the house. The chair in the corner is a fine piece from the early 19th century. A traditional Queen Anne desk is at home with an American quilt dated 1938 and more recent Haitian folk art.

“When we bought the house,” Beverly recalls, “virtually the entire interior was painted dull gray, and that had to change, immediately.” A dealer with expertise in Haitian art, she’s no stranger to a bold palette. The interior was soon painted in bright, but historically appropriate, Sherwin-Williams colors. “It brought the large-scale rooms to life,” she says.

The couple saw no reason to back-date functional rooms like the 1990 kitchen and renovated bathrooms. The Flamingo Bath, in fact, is something of a folk-art piece itself, and a favorite of children. On the exterior, plain white clapboards and a standing-seam metal roof are simple reflections of the vernacular.

The dining room adjoins the library in the 1810 section. The tall chest at right is a centennial piece by Hitchcock.

Given the changes and additions, the Sullivans’ approach has been more eclectic than curatorial. Old World design, rather English, and traditional furniture mix with more modern rooms and art.

Oddly, some of the newest improvements evoke history. For example, banks of contemporary French doors in the 1990 addition suggest a classical conservatory. Furniture has come from family members (generations of whom have been collectors), and the couple also has bought local antiques for years. An expansive array of American quilts, dating from the 1880s and also the 1930s and ’40s, is part of Beverly’s textiles collection. Antique oils, prints, and folk art tie rooms together with color and a bit of whimsy.

Esther & Franklin Schmidt are writers and photographers specializing in interiors, art and antiques. The Schmidts have had a number of books published on interior design, including Passion for Primitives: Victorian Kitchens & Baths, Folk Décor for Interior Design and Cabin Kitchens & Baths.