Glenn and Connie McAlpin had strong motives for wanting to move to this unpromising house. The falling-down structure wasn’t just any 19th-century Indiana farmhouse. A Folk Victorian with Queen Anne details, the house at Pleasant View Farm was built by Glenn’s great-great-grandfather, so it was a family legacy. Plus, “We’d been living down the road, in a bungalow that we remuddled,” Connie admits. “We wanted an opportunity to do another restoration, and this time do it right.”

It was in the fall of 1990 that McAlpin cousins decided to sell the land—throwing in the house for free. The house had been rented out since 1958, and it was in tough shape. “The tenants stopped paying rent in 1980, and they trashed the place,” Glenn says. “It reeked of old cigarette smoke, the walls were filthy and mold- and water-stained, and windows were broken. We spent days literally shoveling out junk, clothing, appliances, rotten food; one room was chock full of garbage that was never hauled away.”

Connie had peeked into those windows. “I saw the woodwork,” she remembers. She was smitten. The couple didn’t have to fight for the house; no one else wanted it. 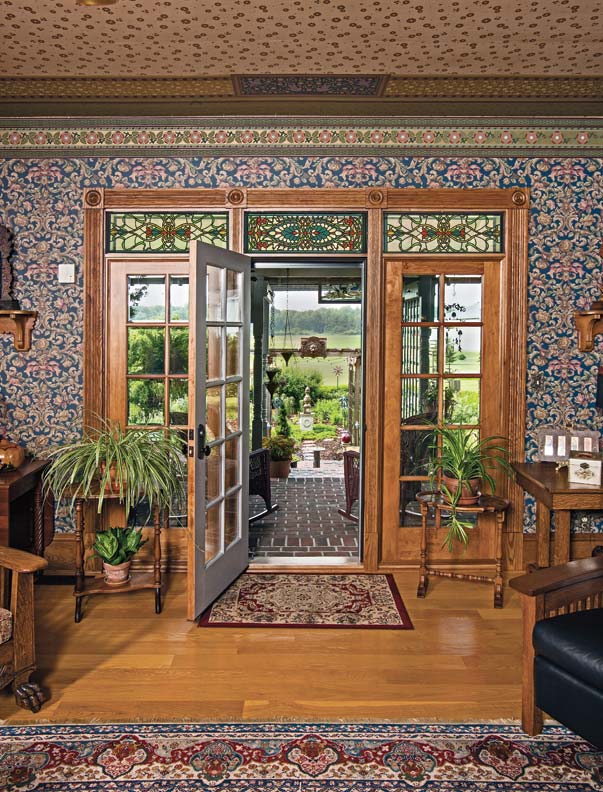 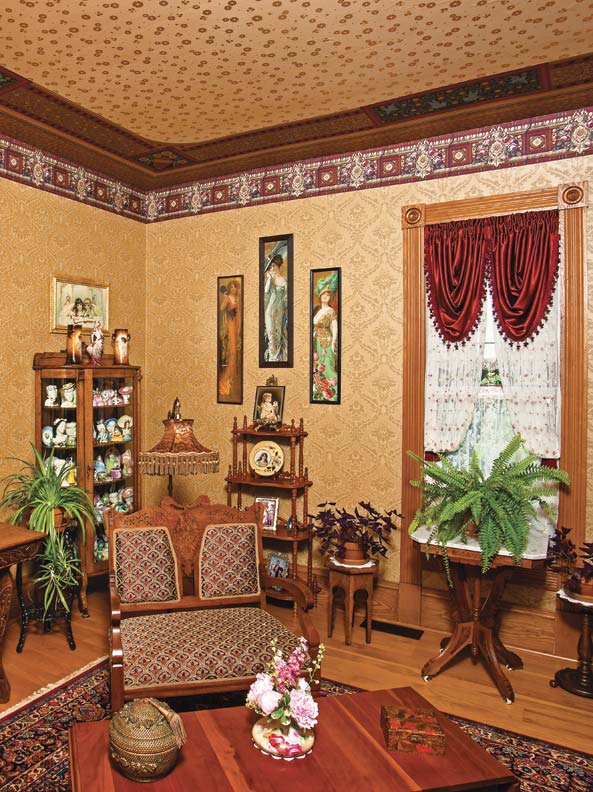 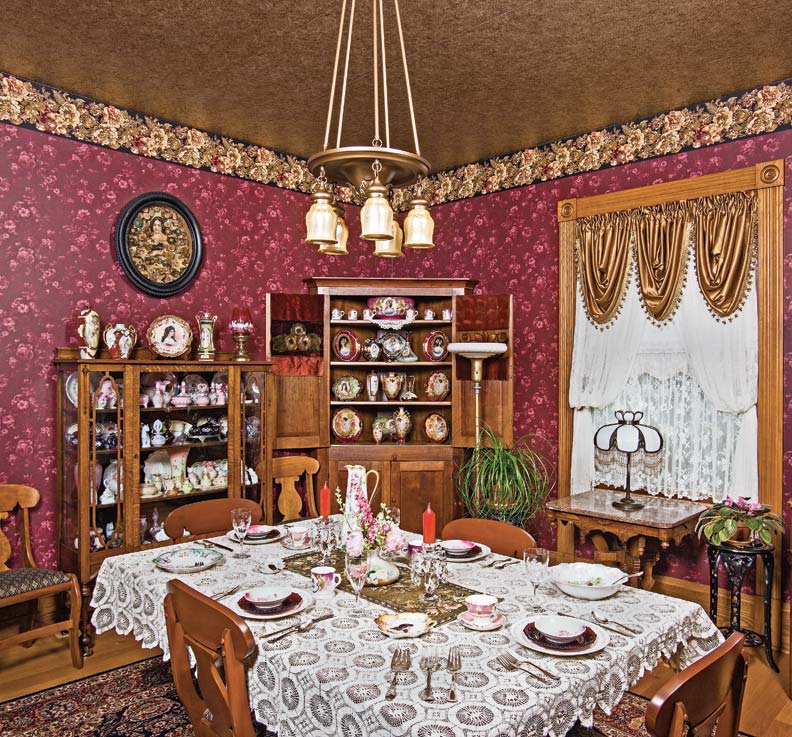 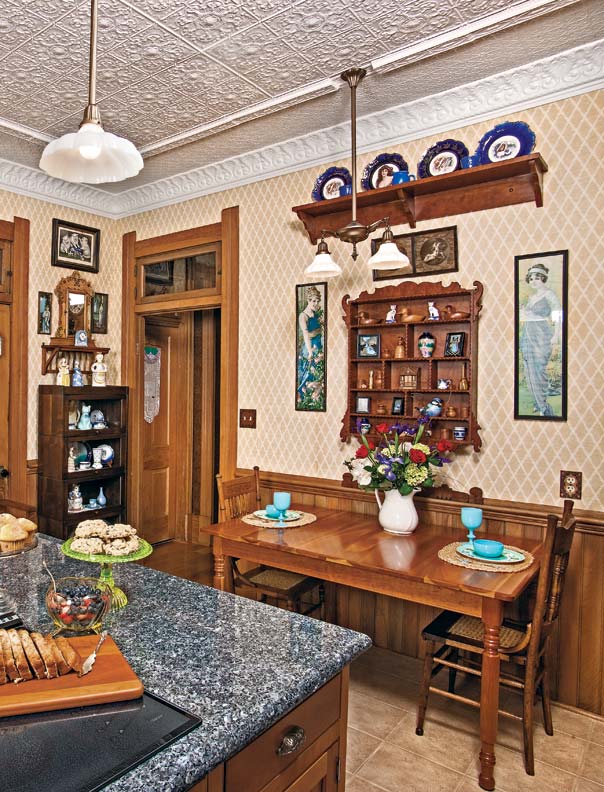 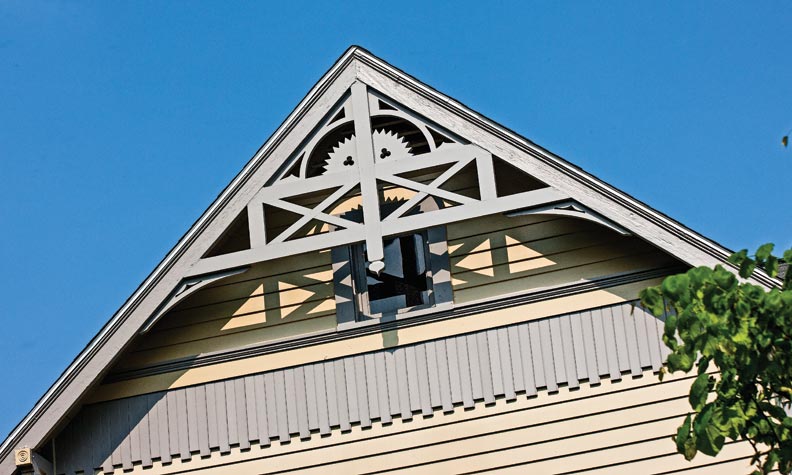 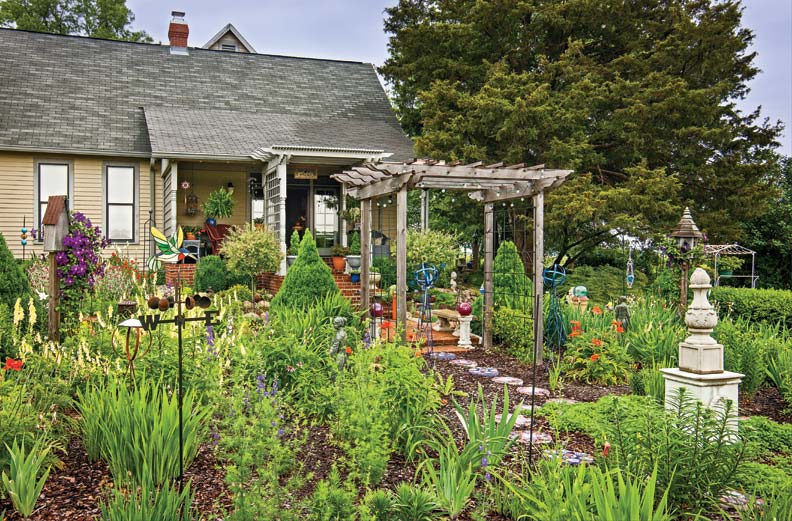 They faced structural issues. “You walked downhill in all the rooms because the floor joists were rotted,” Glenn says. “They rotted because the gutters were gone.” During the next two years, Glenn replaced the joists and most of the brick foundation. Thus began his old-house building education: “I dug down five feet to do the foundation, then went straight to the library for books on concrete and brick,” he laughs.

While farming 600 acres, Glenn reroofed the house, and removed the failing plumbing, wiring, and flooring. In 1992, the family moved in. “We had no running water,” Connie says. “Living conditions were so rough, our daughter lived with her grandparents for over a month . . . frankly, she could have stayed with them for a few years!”

Glenn replaced 15 windows and the transoms, laid new flooring, and replaced the exterior siding and the porch. He copied the new porch from an original photo of the house, replicating posts, trim, and lattice. Exterior trim and other wood ornaments are authentic, too: “Our daughter blew up old photos of the house, big enough so that I could see the details [to replicate them].”

As for the interior trim, “Everything had been painted white,” Glenn says. “It took Connie five years to strip and refinish the woodwork.” They started by removing all the original trim and doors, labeling each piece by room and location, and stacking everything until it could be stripped.

Meanwhile, the McAlpins filled the house with period furniture and wallpaper. They spent five years acquiring authentic reproduction and vintage lighting fixtures. Today the house is most likely far better furnished than it ever was: Glenn says his ancestors didn’t have access to Bradbury & Bradbury wallpapers, for example.

The floor plan is unchanged, but rooms on the main floor have been reallocated. The breakfast room, for example, was the original dining room. Today’s dining room, with its handsome fireplace mantel stripped and refinished by Connie, was once the Victorian sitting room. Over two decades, Glenn and Connie added a new family room and garage wing, bringing the overall size of the house to 3,250 square feet.

“We had no real kitchen until 2000,” Connie recalls. “Just a fiberglass laundry tub for washing faces, brushing teeth, and doing dishes. A card table held a dish drainer. We knew this project would take a long time, and we were OK with that.

“There’s something to be said for taking your time and not getting in a hurry,” she continues. “Fewer mistakes are made if you have plenty of time to think things through. I also believe in doing it once and doing it right. [Before we added the kitchen], people would suggest I get some temporary cabinets. But why waste money when you’ll tear it out and redo it? Use the laundry sink until you can do it right.”

Contractors framed out the family room, but the McAlpins completed the rest of the work. Connie designed the new addition. In the kitchen (enlarged by sacrificing a small bathroom), she specified a massive granite-topped central island with a wood base that, like other new cabinets, matches the original wainscot in the house. Glenn duplicated the kitchen’s original 7/8″-thick wainscot for the adjacent family-room addition.

In 2000, Connie started to wallpaper, and hasn’t stopped yet. “First I papered the walls, then the ceilings,” she says. “Because I bought and applied paper as time and the budget allowed, it was a challenge to match ceiling papers to wallpaper that was already hung.”

Now all of the downstairs ceilings, a generous 10′ tall, are embellished with pattern. Papers are from Bradbury & Bradbury, Schumacher, and Jaima Brown Home. Connie says she plans to paper upstairs ceilings, too. “I might be done after that.”

Some work is on its second round. “One of the first things we did was replace the front doors,” Connie says. “But the glazing is failing and hardware isn’t appropriate, so we’re going to do it over.”

Glenn gives credit to his wife for all the aesthetic elements of their home. “She should have been an interior designer,” he says admiringly. For her part, Connie says her design knowledge came from studying countless magazines, including Old House Journal. “I eat, breathe, and sleep magazines,” she says.

Besides Pleasant View Farm, the McAlpins own a 1904 American Foursquare inhabited by their daughter, as well as a third house looking for the right owners. It was Glenn’s grandmother’s uncle’s house, “built of brick in 1868, never plumbed or wired. We are looking for someone who will treat the house with respect.” Connie laughs, “It seems that we’ve added Realtor to our list of job descriptions.”

Online Exclusive: Check out our guide to period reproduction wallpaper.