“I wanted my next house to be a Victorian,” says Donna Neff, who grew up in mid-century suburban housing outside of Detroit. As young students, she and her husband, Courtney, fell in love with Chicago brownstones; then they lived for decades in an 1821 center-hall Georgian house north of Boston. “After years in simple Colonial rooms, I was drawn to the high ceilings and vertical proportions of 19th-century architecture.”

Donna, a retired art teacher, and Courtney began to search for their Victorian when he retired from his career as a radiologist. The couple had spent years restoring the 1821 house and felt ready for their next—perhaps final—old-house project, which took them to the coastal college town of Brunswick, Maine.

The 1881 Italianate was built by Amos O. Reed, a local developer, then belonged for 70 years to the local Rexall Pharmacy owners. When Courtney and Donna bought the house in 2011, the then-130-year-old house had had just five owners, who mostly were good stewards. It had, however, suffered the indignity of a 1980 caboose-like rear addition, which the Neffs promptly removed. “The tax assessor’s office staff laughed,” Courtney says. “They said that nobody ever undertakes a renovation to make their house smaller.”

A garden is in the space the addition had occupied. The rear wall has a new three-window bay modeled on the original bay that projects from the front of the house. Next, the couple set about creating an appropriate interior for the two storey, hipped-roof house that, as it did originally, measures 2,800 square feet.

The Neffs installed new wiring and plumbing and attic insulation. They removed asbestos from the basement, rebuilt a precarious upper floor in the barn/carriage house, and finally installed a new kitchen and bathrooms. Still, the house was relatively intact, with rooms in their original locations and trim and crown mouldings still there. Steam radiators had never moved; to remove thick layers of paint, the Neffs had them sandblasted and powder coated, then put them back into service. The house boasts its original two-over-two windows and, found under layers of carpeting and linoleum, old hardwood flooring.

“In the kitchen, the old floors are Michigan birch,” Courtney says with a laugh; like his wife, he’s from Michigan. The pale birch flooring, pocked with generations of nail holes, now occupies the new kitchen designed by Donna along with Jeff Peavey, a Maine kitchen designer and co-founder of The Kennebec Company nearby in Bath, Maine. With quarter-sawn oak cabinets, slate counters and an old slate sink, and centered on a 1920s stove retrofitted for natural gas, the kitchen combines function with an unassuming and very pleasing period aesthetic.

The Sub-Zero refrigerator is located behind an oak panel and isn’t visible to someone entering the kitchen. The oak dry sink came from the original Rexall Drugstore in Brunswick and dates to the early 20th century. While Donna uses the green Belmont stove for cooking and baking, a Bosch wall oven and prep area are tucked around the corner to accommodate the Thanksgiving turkey and other big meals.

The contractor for this house was Brunswick’s G.M. Wild, a company specializing in restoration: “We do remodeling and renovation, no new construction,” says president Mark Wild. “Working with the Neffs was a pleasure . . . they are very accomplished renovators while also being patient and considerate.”

A passionate and informed collector, Donna made ample use of salvaged materials. A particular point of pride in the kitchen is the pair of repurposed stained-glass windows installed at the sink wall. The slate slabs behind sink and cookstove and on the floor under the stove are reconditioned blackboards from the old Brunswick High School. An oak cabinet beside the refrigerator was an icebox used in the drugstore owned by the former homeowner. Holophane shades of the late 19th and early 20th century are used in the kitchen and elsewhere.

Donna scoured area antiques shops for Aesthetic Movement or Eastlake-style furniture that suits the late-Victorian period of the house. She and Courtney planted the flower garden outside the kitchen bay at the rear. In the carriage house, Courtney set up a workshop. When he and Donna found a three-foot “Rexall Drug” sign there, they cleaned it and hung it in the barn’s interior. Its electrical illumination still works.

“We are in the Northwest Brunswick Historic Neighborhood,” Donna explains, “and our house is just two blocks from the main street, which is called Maine Street. I walk to the market, the shops, and the library. I always end up in conversations with people I just met.” The community appreciates the Neffs as much as they appreciate it. In April 2018, the couple was awarded the Downtown Preservation Award by the Brunswick Downtown Association, in part for their efforts in rescuing one of only a few remaining carriage houses in town.

Many years ago, when the Neffs lived in Chicago, they bought a stained-glass window with two horizontal panels. “It was during the ‘urban renewal’ of the 1970s, and historic neighborhoods were being torn down,” Courtney says. “We salvaged the windows from a tear-down because we thought they were probably really nice, even though the glass was completely painted over in opaque brown. We could see that there were faceted jewels and beveled glass, so we thought there must be something special under all that paint.” In the decades that ensued, the Neffs brought the window with them as they moved to other houses. Donna spent countless evening hours picking the paint off with a scalpel, gradually revealing the beauty beneath. When they bought the Italianate house in Maine, the double window finally found a home. “This is the first house we’ve had where the window design fits in,” Courtney says. “Now, the afternoon sun casts rainbows on the ceiling.” 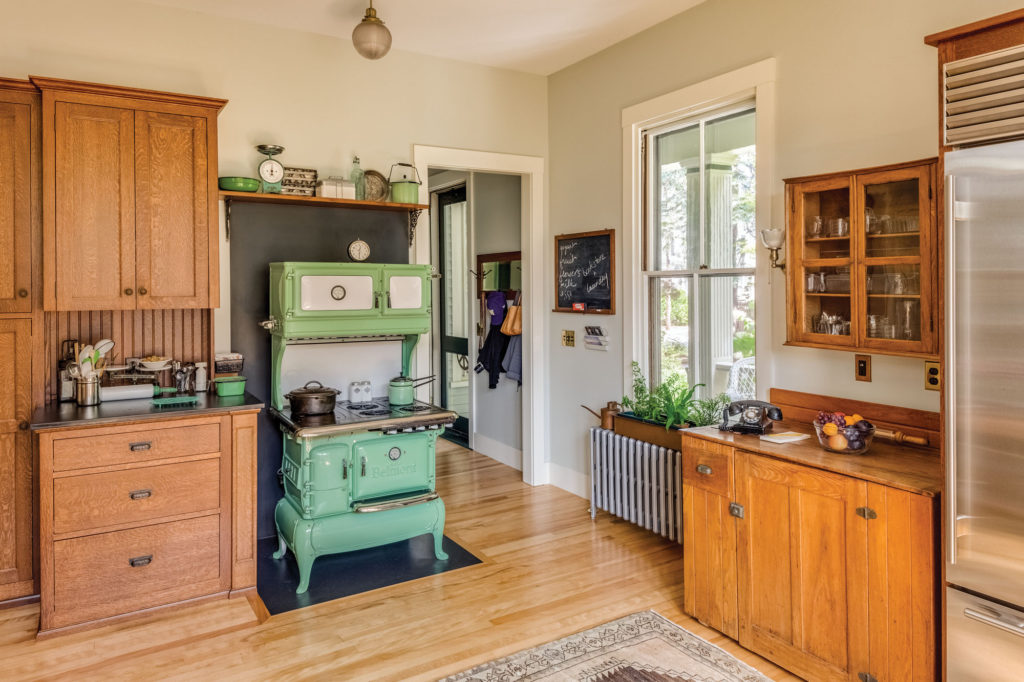 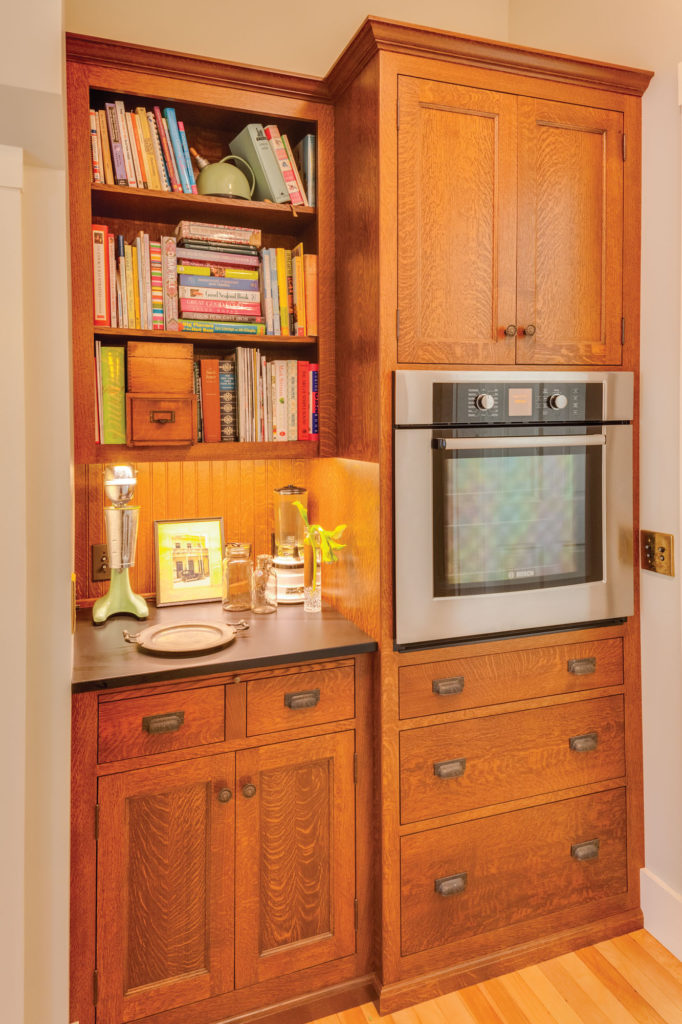 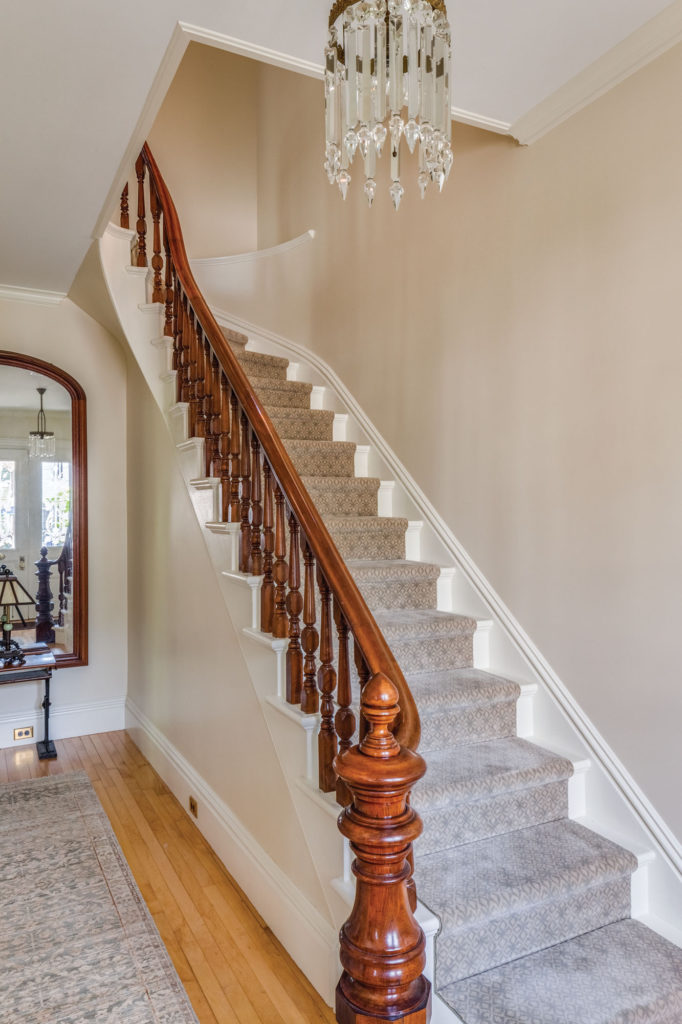