Architecture—and, more specifically, rescuing houses—has been a lifelong interest for Patricia Wood Rosengren. Her father, an architect, designed the house she grew up in, and brought her to the job site to explain proportion and the quality of workmanship. “I was privileged to buy that house when my parents passed away,” Pat says. She renovated it in keeping with its mid-century style. But that wasn’t her only previous project: Pat also has restored two Dutch Colonials and three English Tudors (mostly on the East Coast, though she is a third-generation Californian who’s come home).

Always drawn to the state’s Spanish-style design, she bought this property in San Marino. “I primarily restore houses,” she says. “I think remodeling is somehow disrespectful to the architect.” With white stucco walls, long hallways, and views through arches, the house was perfect for displaying her collections of folk art, Catalina Island and California pottery, and tile. 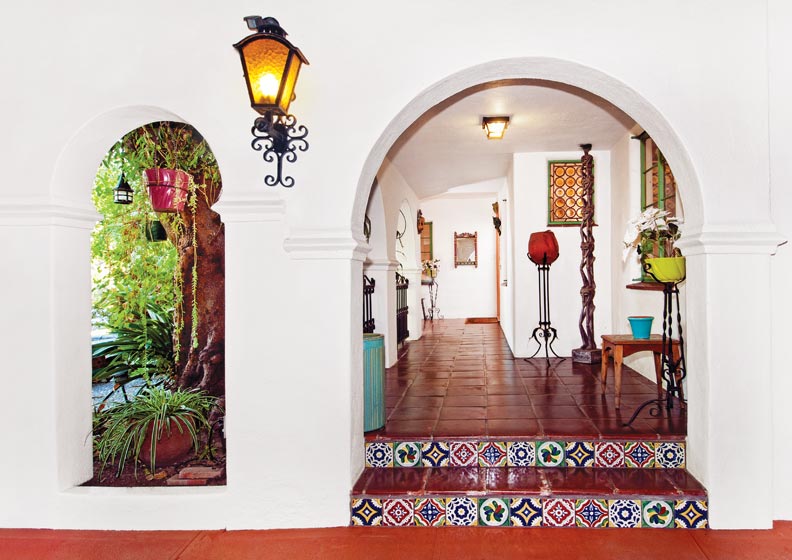 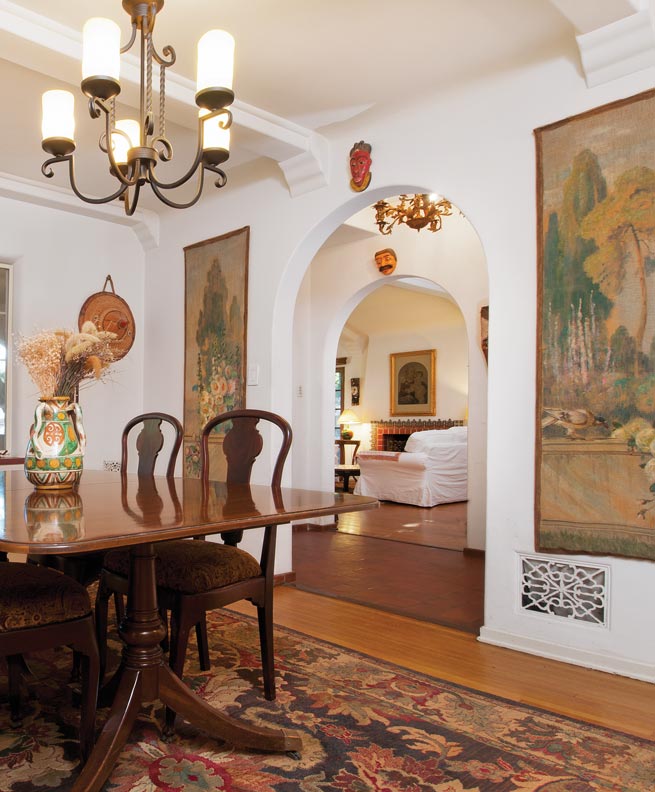 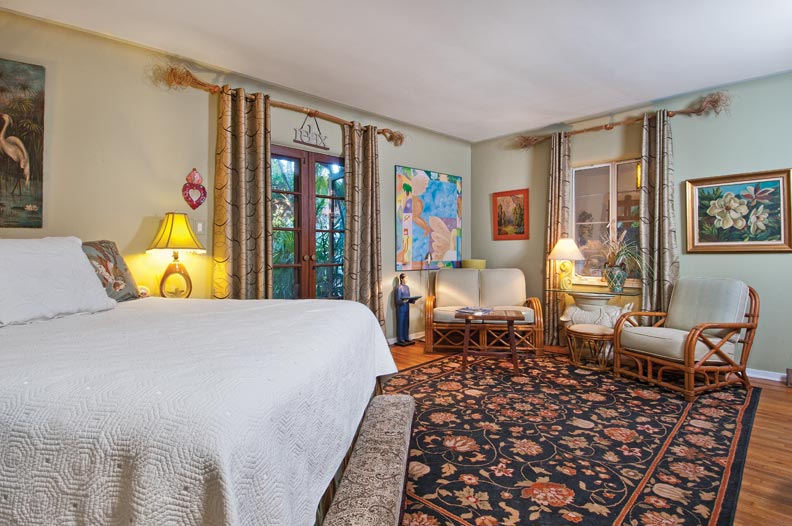 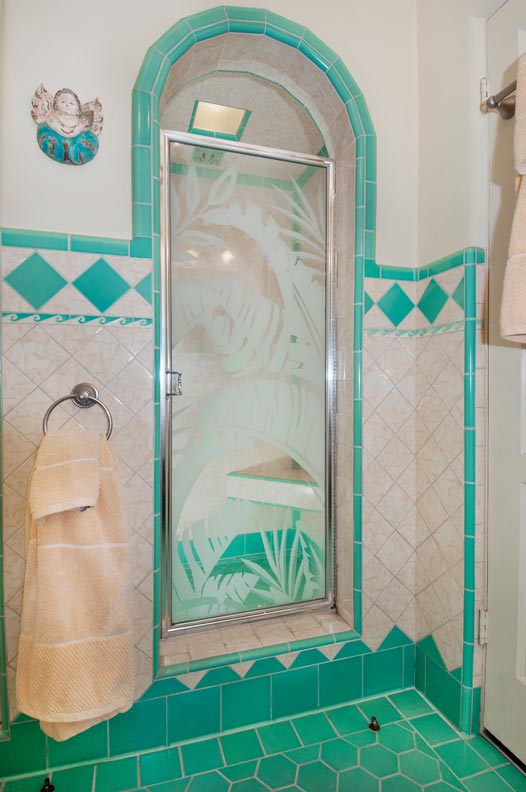 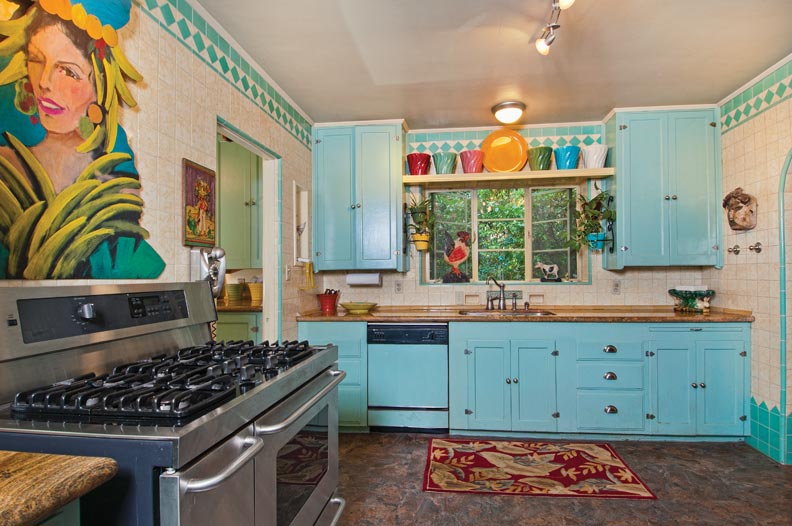 Although her career was in public relations—she eventually launched her own ad agency, which is now run by her daughter-in-law—Pat is a writer and artist. With an eye for interior and landscape design, she’s an expert at editing herself. For example, in the living room, at first she considered painting a design on the plaster beams, but now she’s happy she did not. “I feel one is often tempted to over-furnish a big room,” she says, “but instead, I move acquisitions in and out over the years.” When there’s a party, she adds temporary seating.

The enhancements she did make have been just right. For the living-room fireplace, she designed two rows of custom-colored decorative tiles to enhance the plain square tile border that was there. “It’s a big room that seemed to warrant more interest around that focal point,” Pat explains. And, after researching hundreds of Moorish and Spanish fountains, she designed the beautiful tile fountain in the entry yard.

Pat’s interests and decorating approach are evident in the spare living room. In front of a large window hangs a glass panel depicting colorful parrots; it was salvaged from El Encanto, a 1933 building on Catalina Island. Antique carved cornices punctuate the tall French doors. Furnishings are mostly antique and very eclectic: a rug from a trip to Fez in Morocco; a 1930s rattan bar and a Federal-period sideboard purchased from an estate in Rye, New York; a heavy 1940s bent bamboo chair with an art-tile coffee table
from the 1950s; an early Herman Miller side table. Brass lamps are Mexican; the petit-point over the fireplace is 16th-century French. Her own paintings hang in the room. “Many years and many trips—often to flea markets on both coasts—have given rooms character,” she says.

The Hacienda, as the house is called, was built in 1934 by architects Pierre & Sons. Their wealthy client, who was building it for his spinster sister, was hands-on, making decisions about lines of sight so that his sister would feel secure living alone. Just four blocks from the home of railroad industrialist Henry Huntington (now the Huntington Library and Botanical Gardens), it’s a house of relatively modest size with thoughtful design and details.

When Pat and her family moved here in 1992, the house had been a rental for many years, owned by someone overseas. “Everything was original—which was both good and bad,” she says. “Truthfully, I felt a deep connection the moment I came through the front door.” She ignored animal-stained shag carpeting, water-damaged ceilings, and 23 broken windows.

One bedroom has a sleeping porch. Artistically set tile made in South Pasadena lines the walls in the kitchen and bathrooms. Ceilings are coved, and windows are set into curving stucco. Roof tiles are original but for a few replacements. They were made by hand: “You can see fingerprints pressed into the clay as the worker formed each piece over his thigh,” Pat says. Arches are visible from everywhere in the house, “even sitting on the loo.” Thick stucco walls and a tall hedge on the east and west sides keep the house cool. “I kept discovering small, custom details,” Pat remembers, “like a round terracotta tile depicting a rabbit, inset into the roofline of the carport. The house is simply charming.”