You might think that imbuing historical New England design with the upstart spirit of Australia would be like trying to catch lobster with a hook and line: no chance. But consider a new home, situated in a historic Boston-area community, which perfectly strikes this unlikely balance. With an aura of the Regency style beloved by the homeowners, the house still suggests the deep history of its bucolic location—rolling woodland that was once owned by Ralph Waldo Emerson, and where Henry David Thoreau wrote in his journal.

The homeowners have been in love with New England for many years. But several features of the houses they grew up in half a world away—one in Australia, the other in New Zealand—had become part of their style DNA: high ceilings, tall French doors and windows, and voluminous rooms.

Their architect, Patrick Ahearn, FAIA, of Boston and Martha’s Vineyard, remembers the moment when the couple approached him. “They basically wanted the ‘new old house,’ Ahearn says, “a house that reflects the property it sits on, from the 1700s.” The conundrum, Ahearn recalls, was “how do we take a New England Colonial or Federal-period house and add features they want, like volumetric scale, while still preserving the integrity of the house?”

Working with Bryan Sweeney of Sweeney Custom Homes & Renovations in Holliston, Massachusetts, and Dan Gordon Landscape Architects in Wellesley and Martha’s Vineyard, Massachusetts, Ahearn definitively succeeded. The house won the prestigious Bulfinch Award, given by the New England Chapter of the Institute of Classical Architecture & Art, earlier this year; it is the sixth Bulfinch for Ahearn. Surrounded by gracious Colonial homes that include a 1700s farmhouse, a classic New England landscape, and ancient stone walls, the new house only enhances the area’s rich history.

The house’s massing is broken into a main block with connectors and wings, both to minimize the structure’s scale and to imply a previous history of additions.

“This land is right out of the Paul Revere era,” Ahearn says. “We took the history of the location and the overall site to heart. The script was, ‘Let’s pretend this was the original 1700s house, which was added onto over time; and then we came across it and restored it.” The homeowner says that, in fact, guests often ask her and her husband about the age of the house and when it was restored.

To carry it off, Ahearn reached deep into his bag of tricks, with the intention of giving the structure spaciousness while retaining a cozy farmhouse feel. Setting the floor joists into the foundation, rather than over it, allowed Ahearn to pick up another foot of ceiling height. Cottage-style sashes on the first-floor windows in the main mass create volume and height. Wide Greek Revival corner boards frame the four-bedroom house, evoking a modest tone. 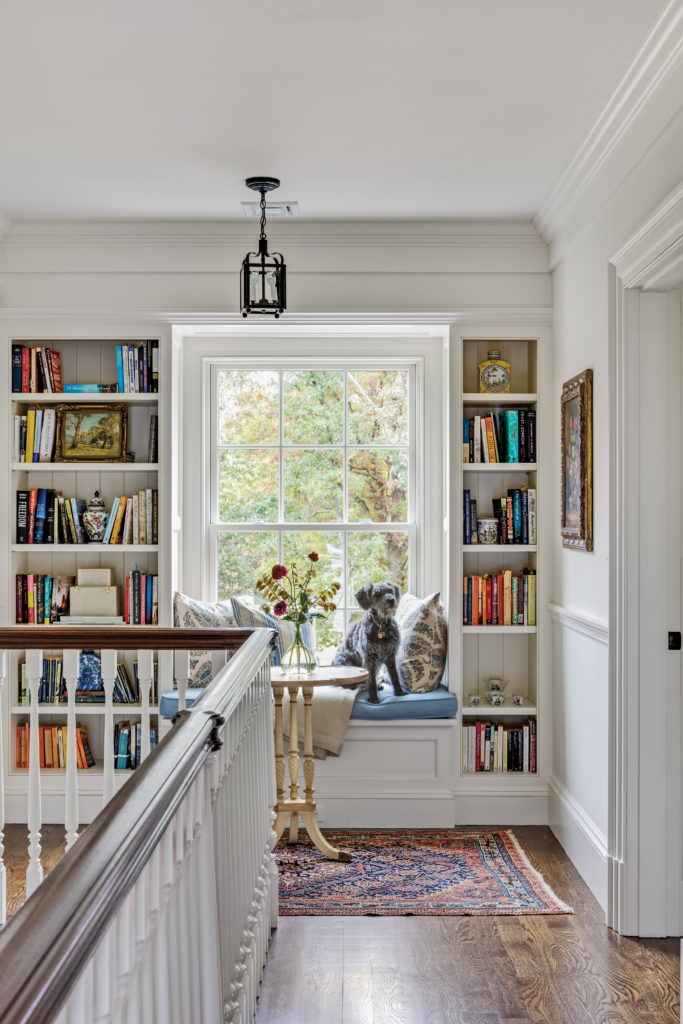 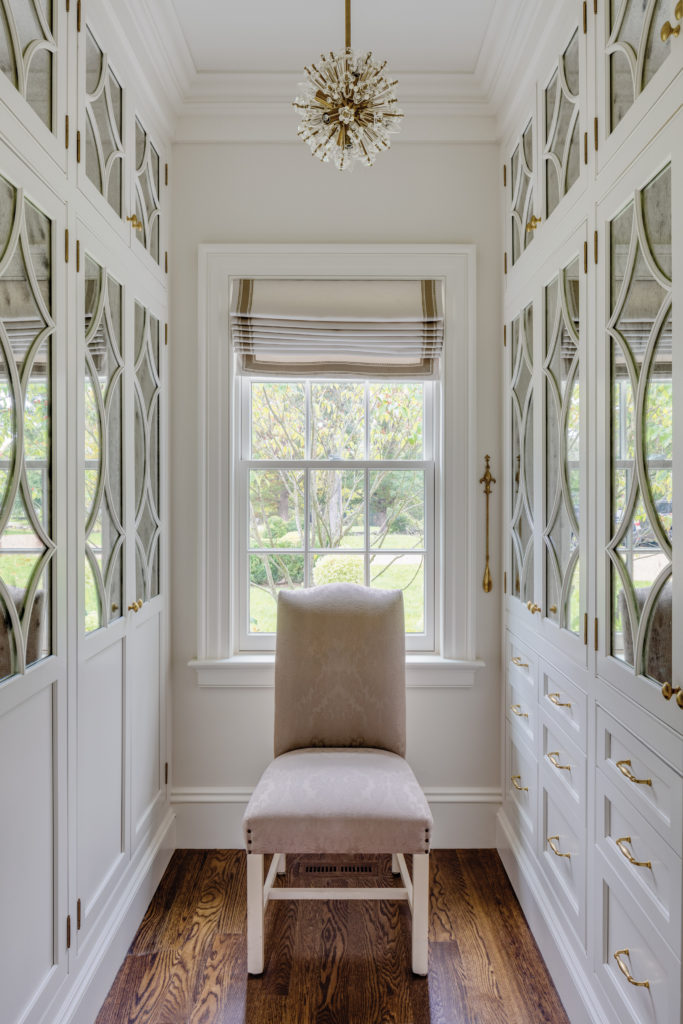 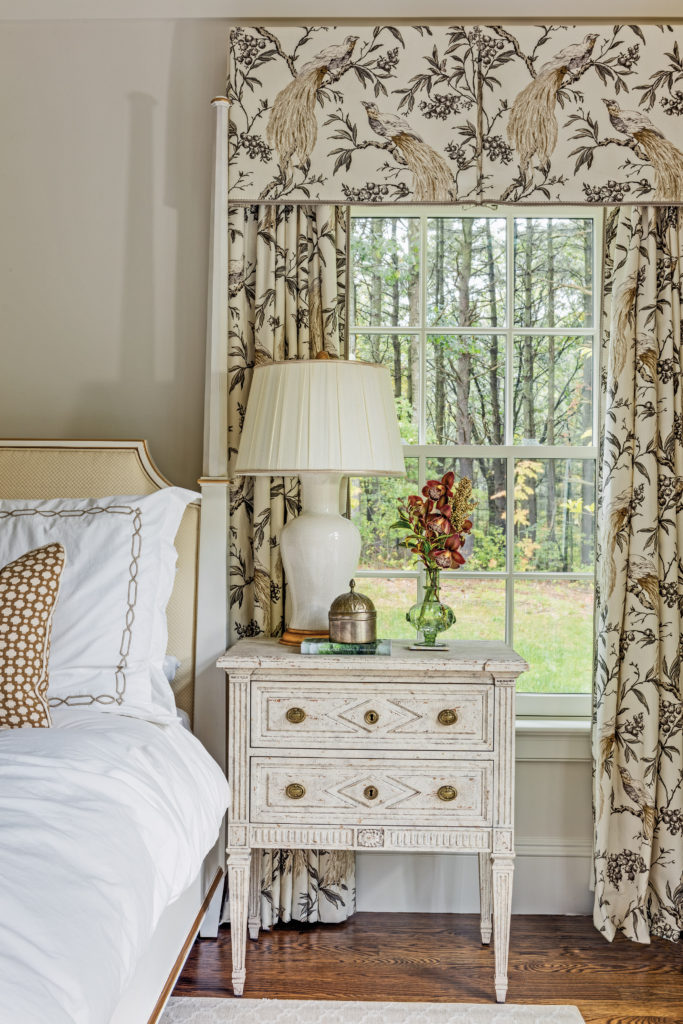 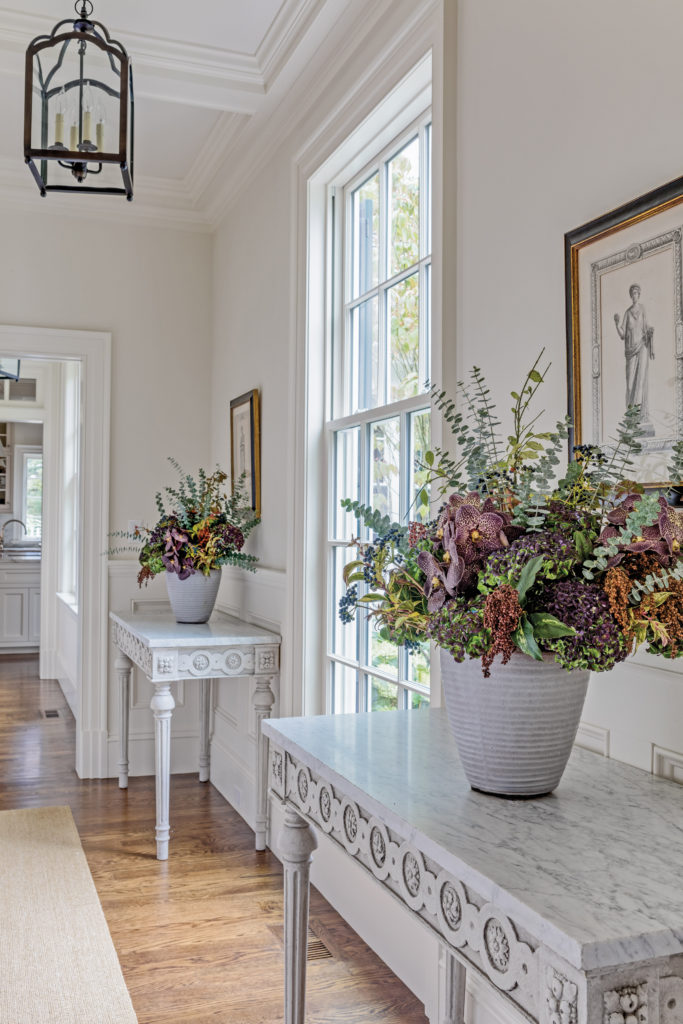 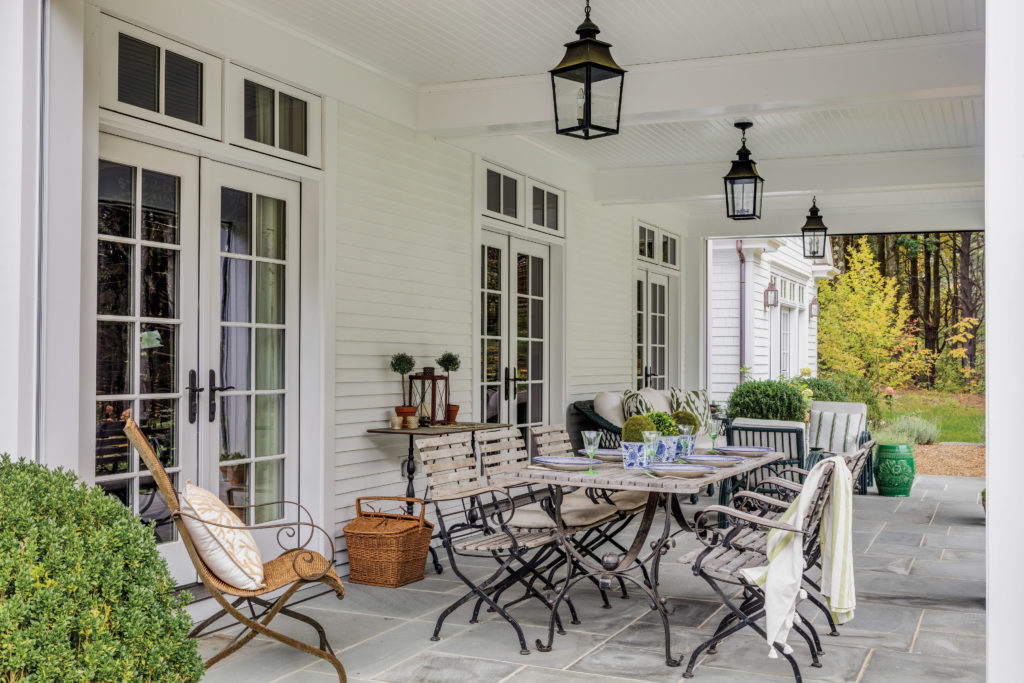 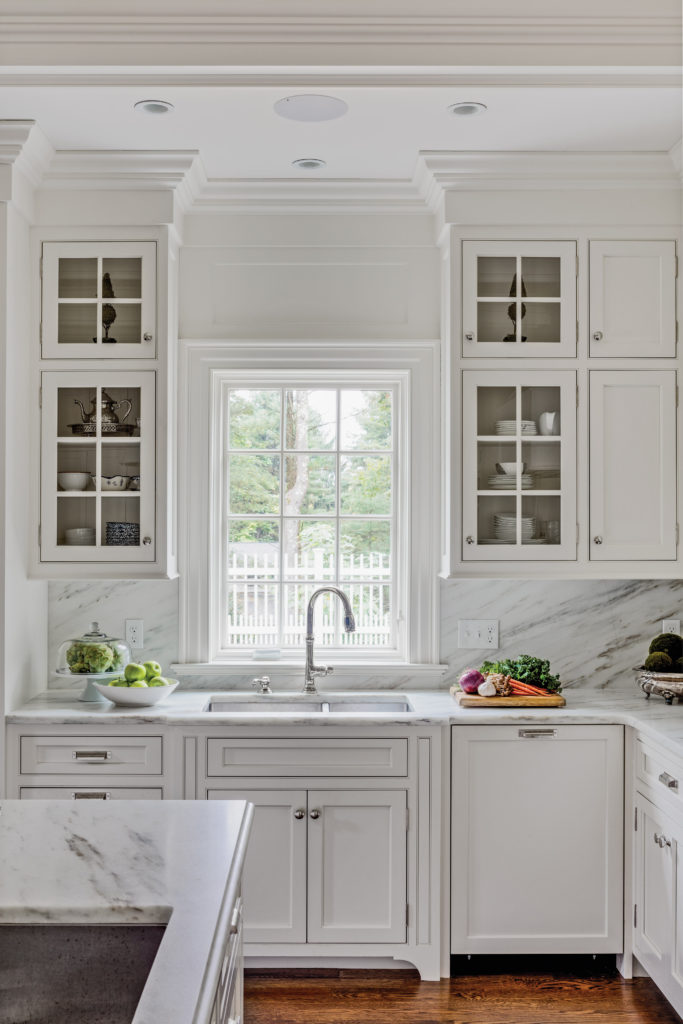 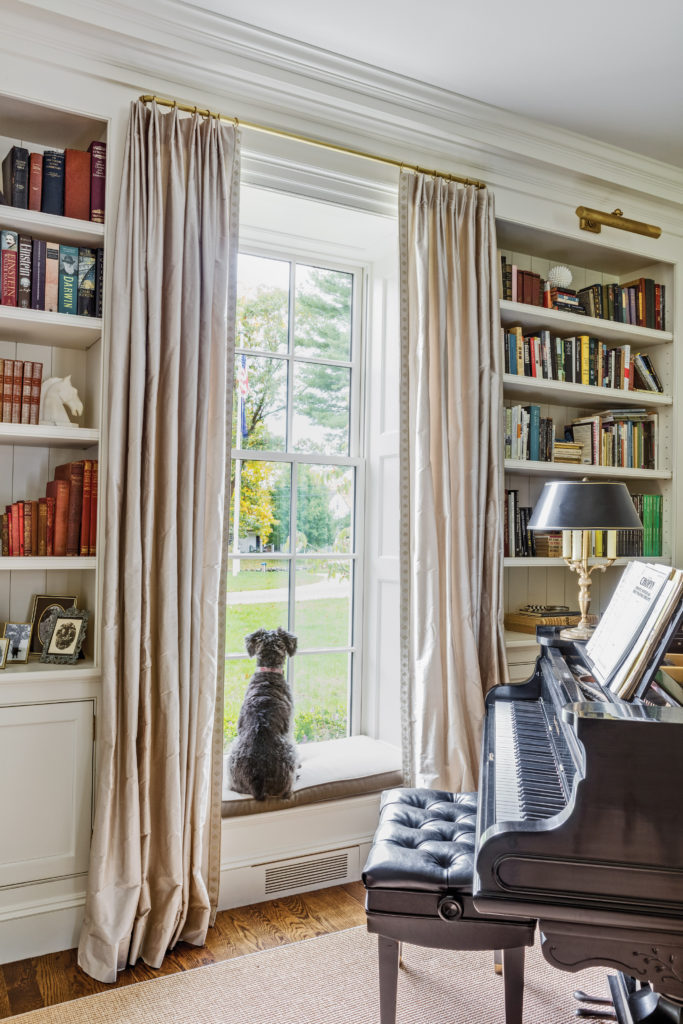 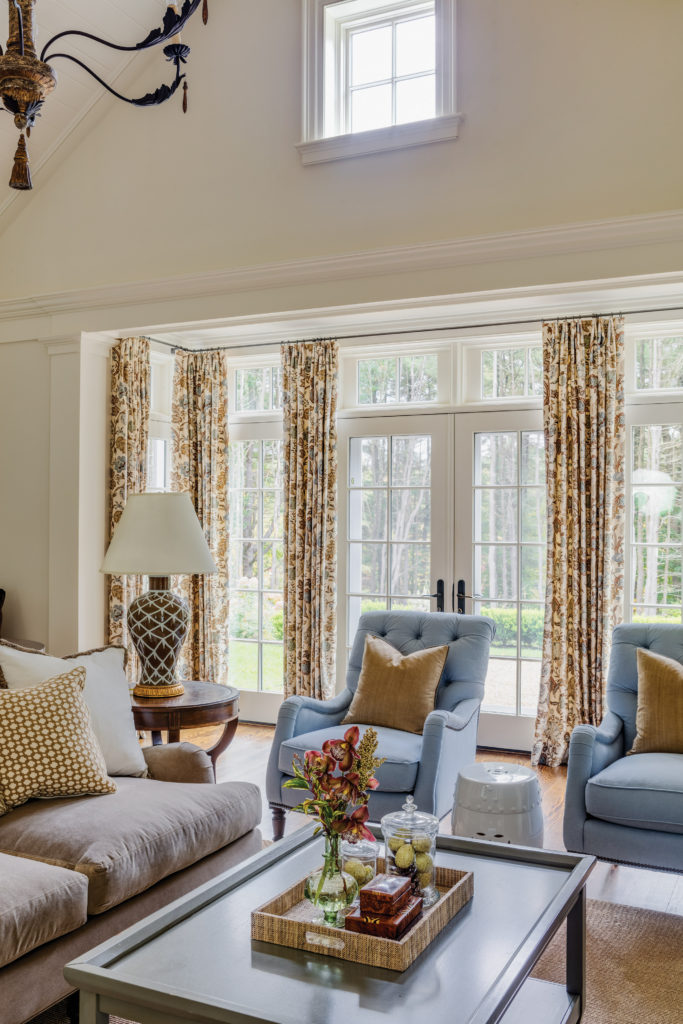 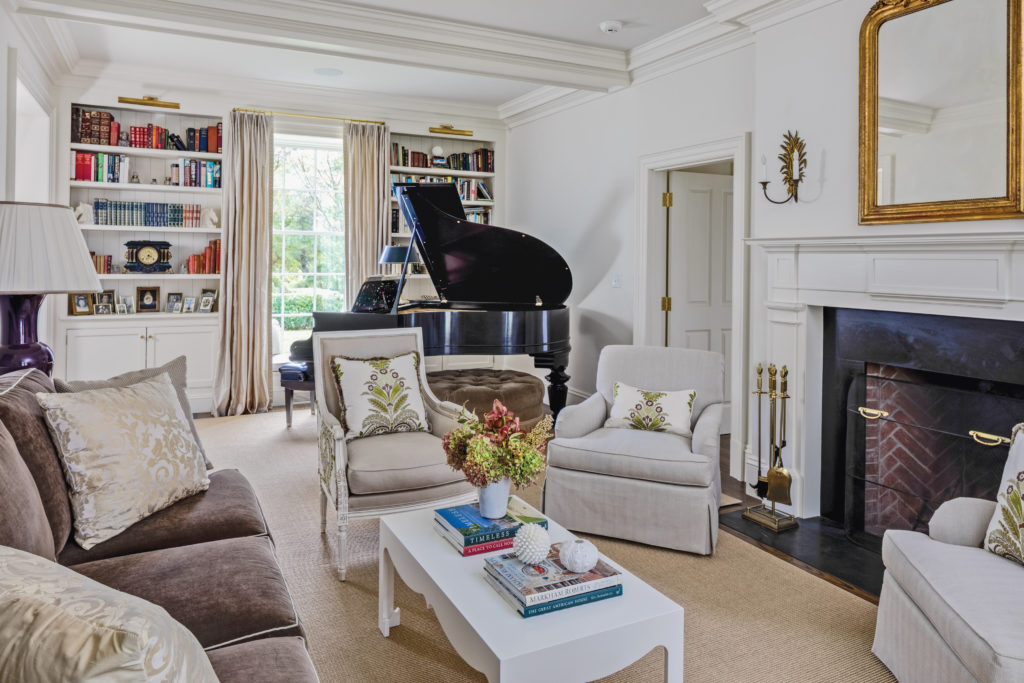 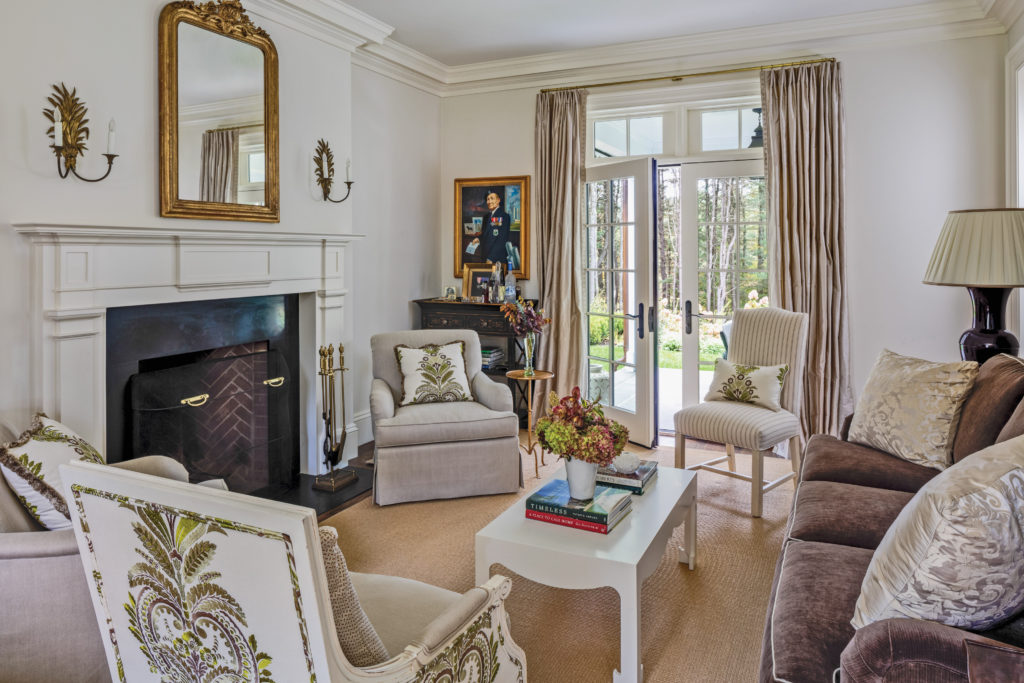 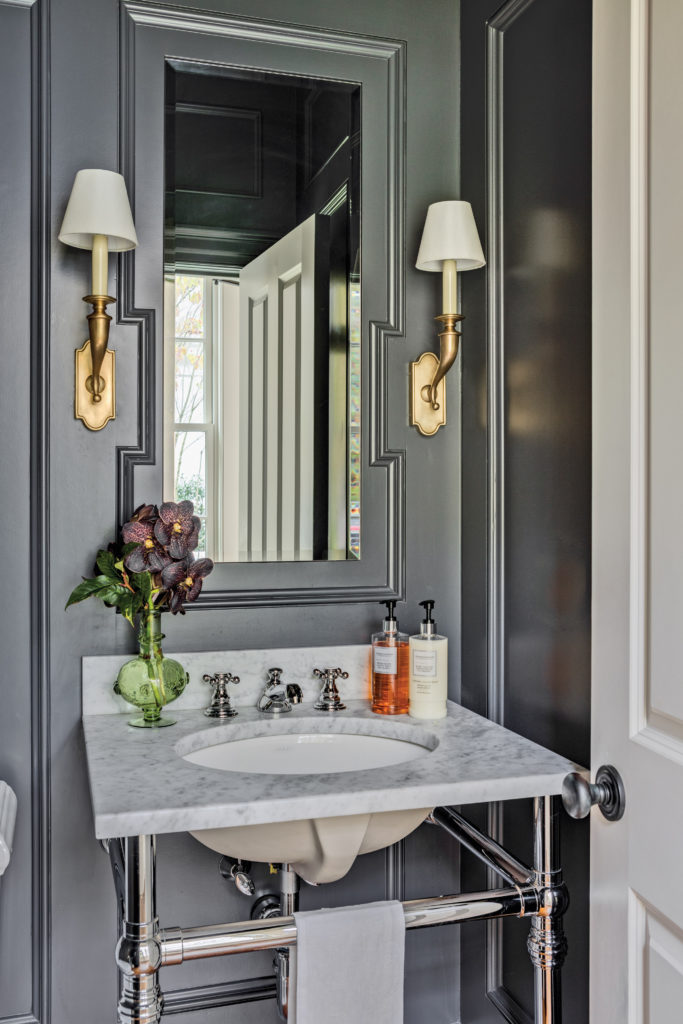 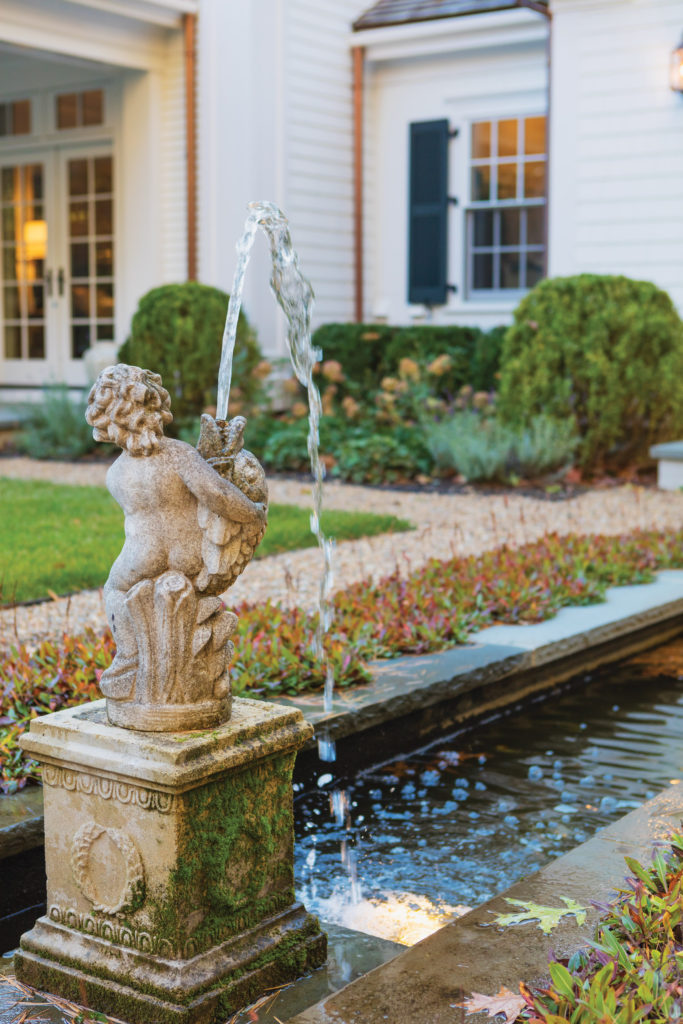 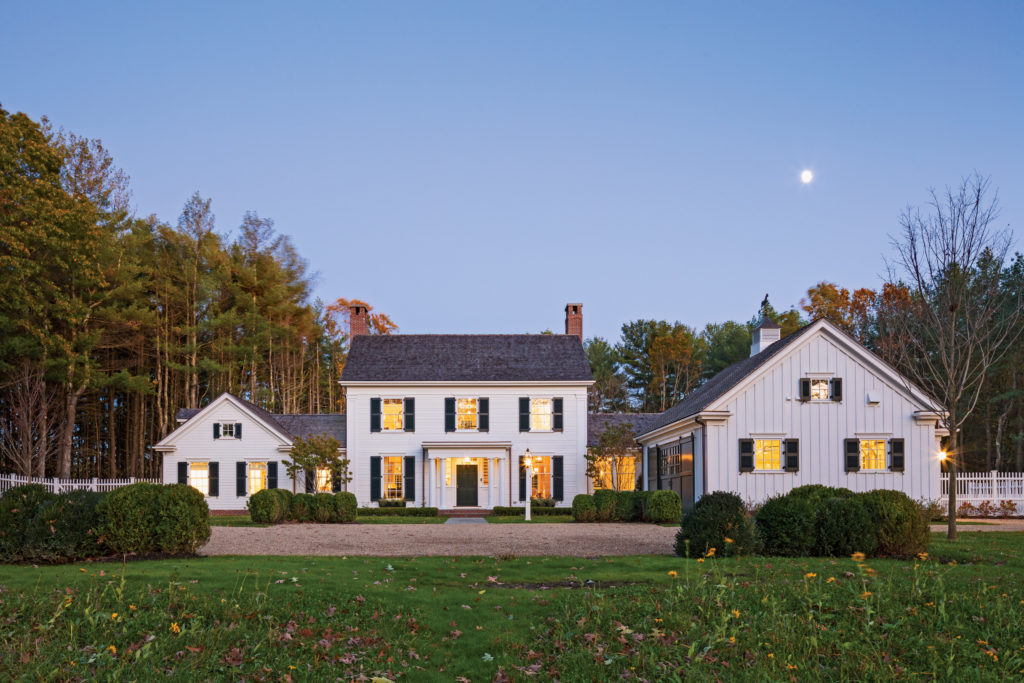 The first order, though, was to establish a sense of New England history. Ahearn designed the house as an assemblage, to suggest the journey an original farmhouse likely would have taken: to start, a symmetrical, three-ranked Federal box with simple lines and Greek Revival overtones. Other pieces give the impression of add-ons as the family changed; even the garage mimics a beautiful barn that would have been connected to the farmhouse centuries ago, with sliding barn doors in the front and a hidden entry for cars.

On the exterior, clapboards, which usually are laid four to four-and-a-half inches to weather, were laid with a three-inch exposure, to adjust the eye to a smaller scale. A brick veneer laid over the foundation, which also details chimneys that bookend the main gable of the house, signal elegance.

The front entry is warm and inviting, with single windows, top and bottom, on each side of the double-column portico centered in the main body of the house. The extra-thick, chunky front door, framed by a glass transom and sidelights, sports an old brass doorknob.

It is the highest form of praise, says architect Patrick Ahearn, when first-time visitors to the house ask, “When did you finish the restoration?”

Stepping into the house reveals, through a set of French doors, a covered porch in back. The wings, a family room on the right and master suite on the left, also have French doors. The second-floor hallway reveals a door to the upper deck, allowing access without walking through a bedroom.

A combination of Ahearn’s architecture and the homeowner’s interior design skills—she did the entire interior herself—give the house a subdued ring of history. Wood floors throughout the house are oak with the sheen of an English chestnut stain. In the master suite’s dressing room, high glass doors are framed in a Regency pattern. A coffered ceiling in the study is a suggestion of Greek Revival style. Beamed ceilings in the kitchen and a cathedral ceiling in the family room—with beams that follow the roofline—seem to suggest eras the evolving house would have come through. The kitchen is the only room with recessed lighting; the other light fixtures, chosen by the homeowners, retain the historical mood.

Other details, such as the dining-room wallpaper, show the homeowner’s skill in art and design—impressive, especially considering that she and her husband are both techies. The covering appears to be silk chinoiserie, but it’s a reproduction wallpaper. To furnish the house, she used a variety of sources: online information, Pinterest boards, and individuals who offered help.

The owner–designer has an innate sense of what distinguishes an interior. The furniture is a “high-low mix,” she says, which includes beautiful tables discarded by their owners, and Bunny Williams lamps, a splurge for the family room.

The effect is snug, warm, and welcoming. Ahearn says it’s one of his favorite houses. “It’s the scale, sensibility, timelessness, and how the house lives; getting the tall volume without it looking out of scale.” The couple couldn’t be happier.

“I think of this house as the great American dream,” says the homeowner. “New England is home, and to be able to build this house is a dream. We keep pinching ourselves.”