American Tudor Revival is among the most recognizable styles of domestic architecture. These picturesque houses, usually of brick or stone, fill entire suburban neighborhoods. English architecture had long influenced American taste, of course, from the Colonial houses of New England and Virginia, through the Gothic Revivals of the 19th century. But never was Anglophilia more apparent than during the Tudor craze. In the first wave, the wealthy asked their architects to build stone manors replete with Jacobean parapets and oriels. As the style peaked during the 1920s and ’30s, streetcar suburbs sprouted pitched-roof cottages with masonry veneer and decorative half-timbering. Mansion or cottage, the Tudor Revival house is usually asymmetrical and dominated by a steep, multi-gabled roof

The revival dates back to late-Victorian interest in medieval times. From about 1895 to 1915, picturesque half-timbering was rare; the stone buildings tended more toward Flemish gables and Renaissance façade ornaments. Tudor took hold after 1905, coincident with the American Arts & Crafts movement—another medieval revival. By the 1920s, Tudor was more popular than even the Colonial Revival style, in some upscale towns. Steep roofs and half-timbered gables appeared on small planbook houses and stockbroker manors alike. Most houses were well built but not opulent; the style hinted at deeper “roots” and lent an illusion of Anglo aristocracy to the middle and upper-middle classes moving to new suburbs.

Construction was uncomplicated: stucco or brick veneer—a new technology—covered an affordable wood frame. Builders freely mixed late-medieval details derived from thatched cottages and stone manors. (Though “Tudor” covers most English Revival houses of the 20th century, subsets include the Cotswold cottage and the Elizabethan town house.) Unlike the “Jacobethan” style favored by architects between 1895 and 1915, postwar examples were informal and even storybook, though landmark examples continued to be built into the 1930s. The style was out of fashion by 1945.

The revival of late- and post-medieval architecture started with designer William Morris and architect Richard Norman Shaw in England during the 19th century. The American Tudor Revival became an Anglophile phenomenon in the suburbs of the 1920s and later. The term Stockbroker Tudor is a pointed reference to bourgeois houses built by conservative new money.

Tudor refers to the reigns of the Tudor monarchs [1485–1558]: Henry VII, Henry VIII, Edward VI, and Mary I. Tudor falls between the Perpendicular Gothic before it and the classical Palladian style that would follow the Jacobean period. Mullioned (divided) windows and oriels, flattened Tudor arches, brickwork combined with half-timber construction, tall gables, and decorative chimneys predominated.

Elizabethan connotes the “golden era” of the reign of Queen Elizabeth I [1558–1603], the time of Shakespeare and the English Renaissance. Our style designation “Tudor” is often assumed to include this period’s influence. Jacobean refers to the reign of King James I [1603–1625]. Jacobethan is a word coined in the 1930s to refer to “baronial” English Revival architecture that combined elements from the Elizabethan and Jacobean periods..

House exteriors ran from somber to whimsical—but the interiors were thoroughly modern for the times. A less formal living room had replaced the parlor. The kitchen had electric appliances and an eating nook; the first floor boasted a powder room. Tudor sentiment might show up only in windows, a Tudor-arch fireplace mantel, or a “medieval” staircase newel.

The early wave of English Revival houses was upscale, often featuring two-storey Great Halls with baronial fireplaces and expensive paneled walls. Rich suburban examples might have a high-ceilinged (or step-down) great room, perhaps with a timbered ceiling. Many spec-built models ca. 1925–1945, however, had generic interiors much like those in late bungalows, Dutch Colonials, and Spanish Revival houses. Arched door openings, French doors, and coved ceilings were popular in all of these. 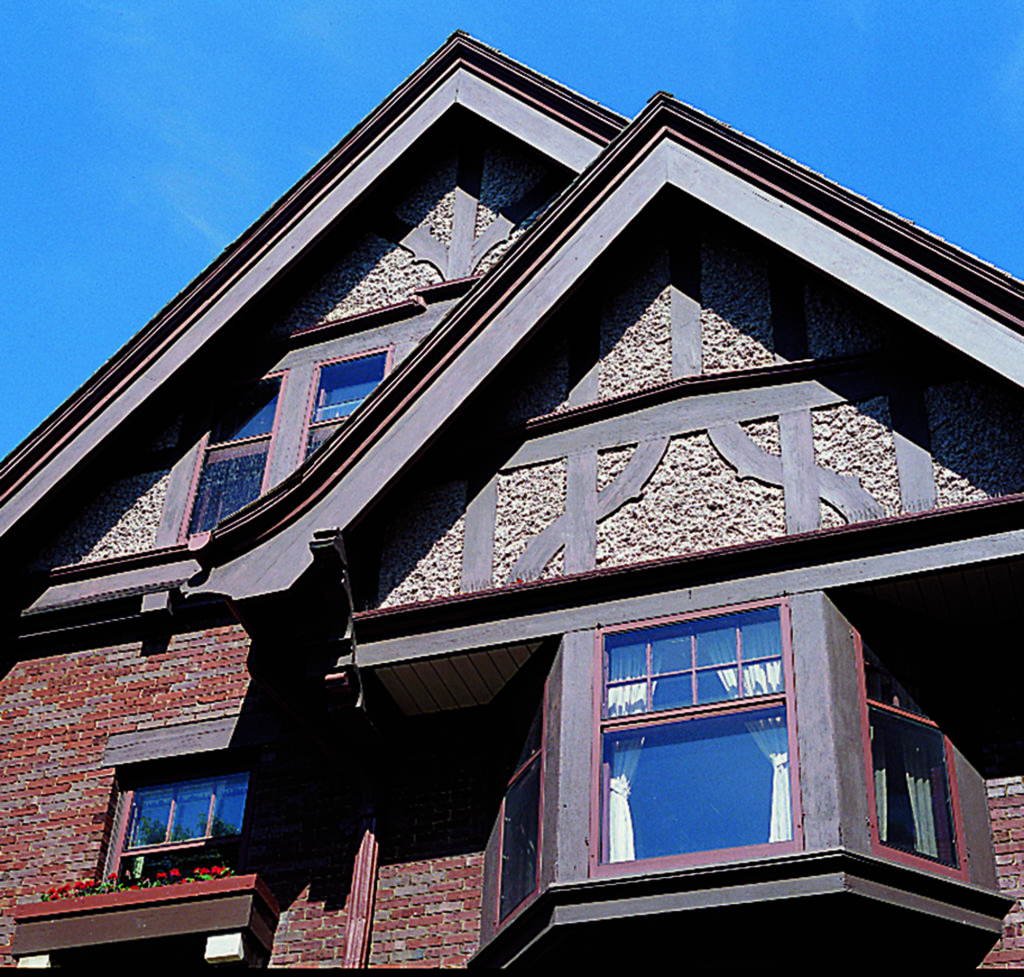 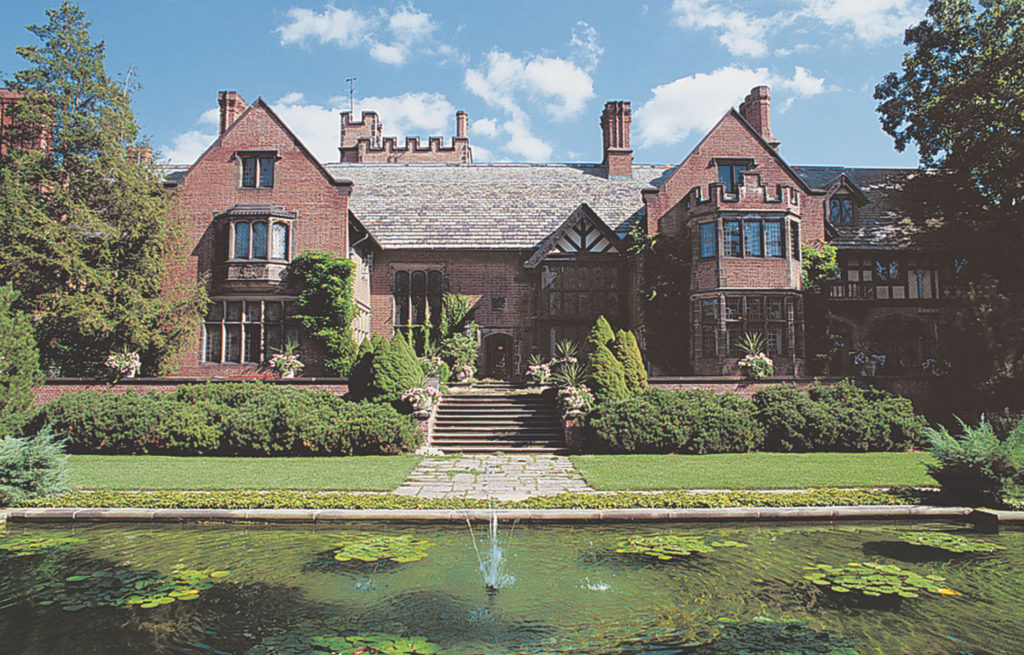 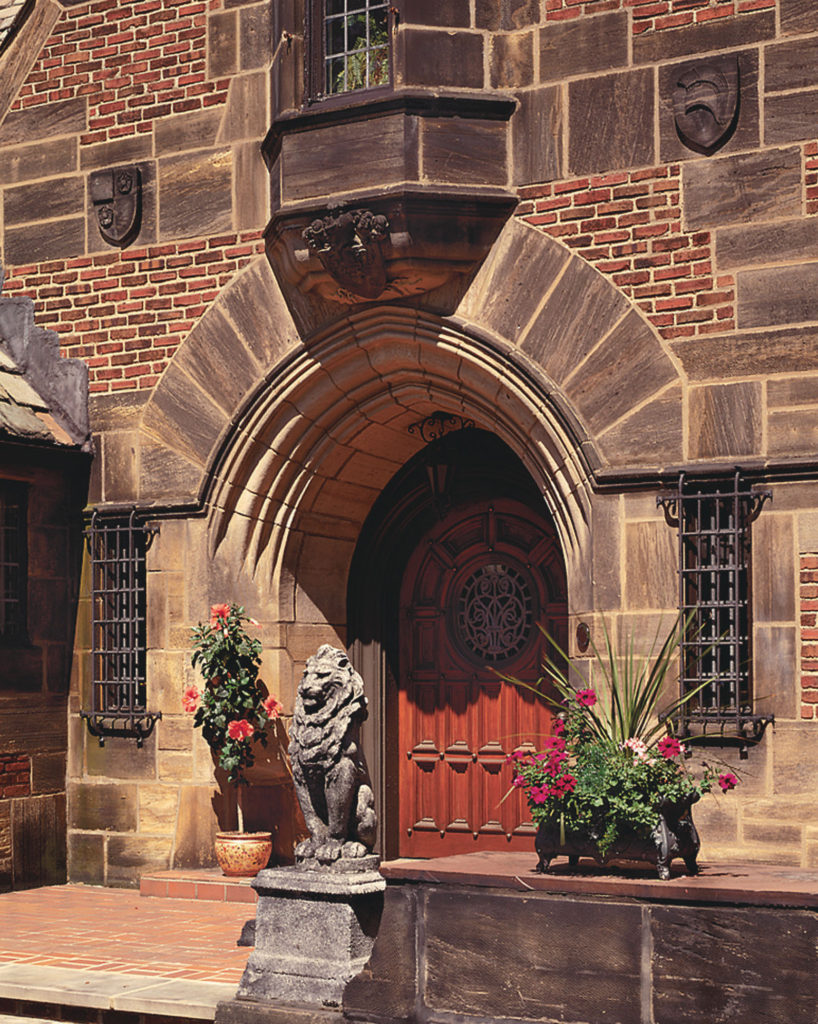 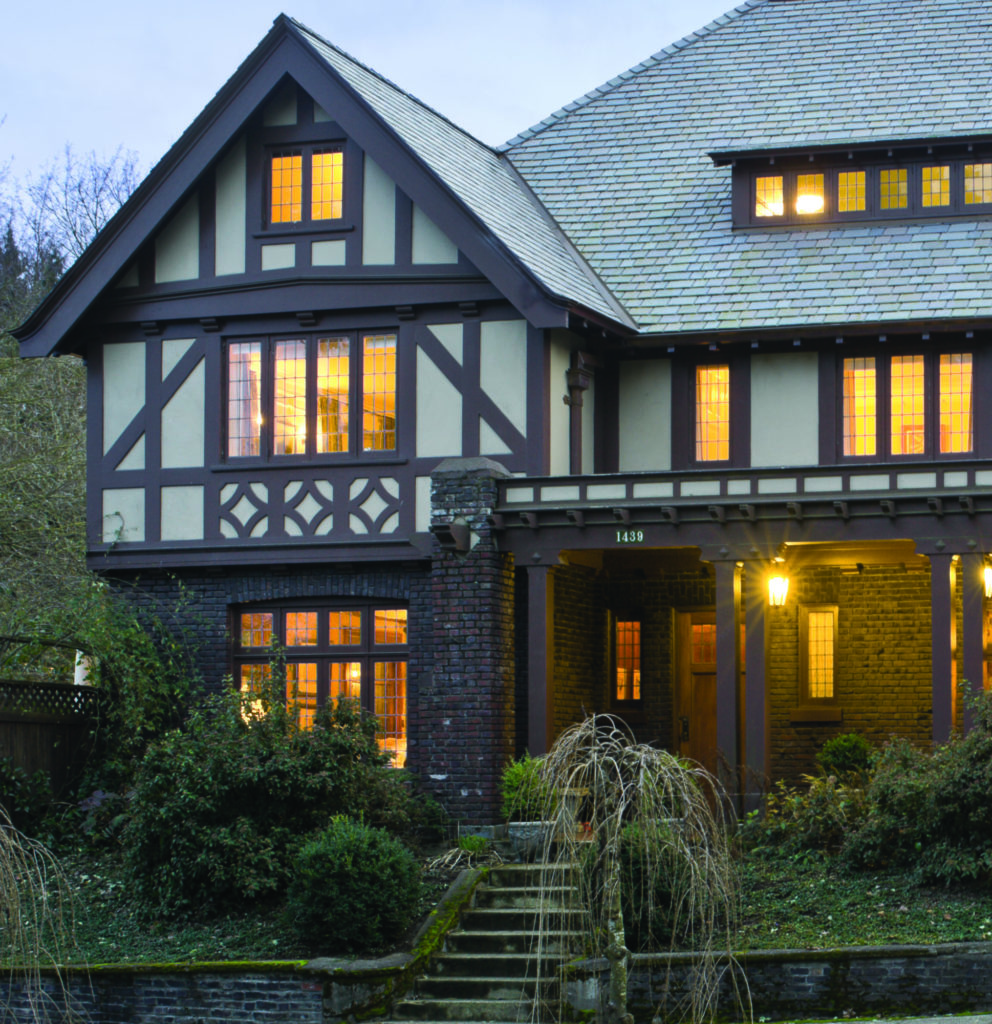 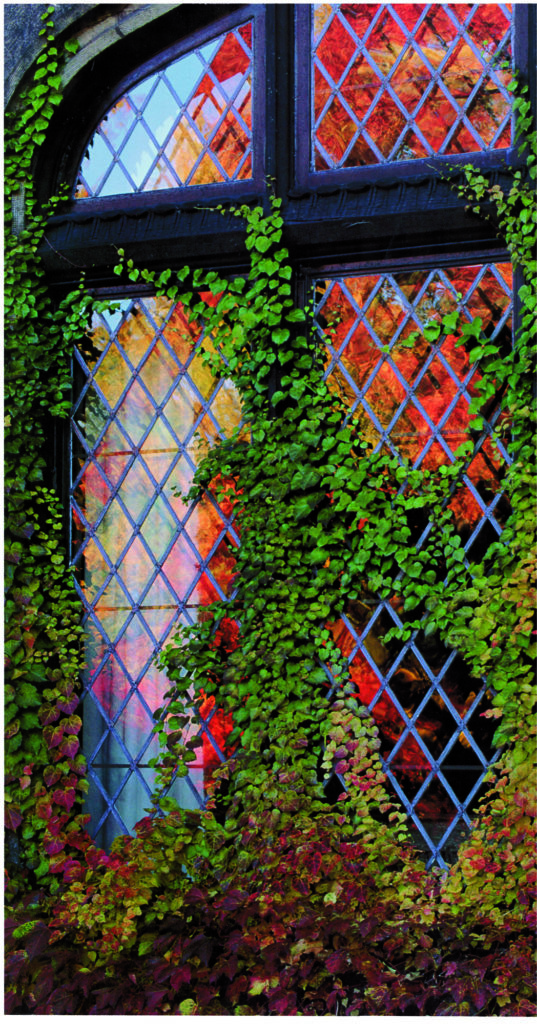 Steep gabled roofs: A typical cross-gabled builder’s house plan, even wood-framed houses, could be tweaked toward Tudor with a steeper roof pitch and an articulated entry house or front door.

Elaborated chimney: Another indicator of Tudor style: a large or tall chimney, often prominently featured on the front or one side of the house. It may have patterned brick or stone.

Old English forms: The hallmark of suburban Tudors is decorative half-timbering, as on the second storey of this house. Asymmetry and catslide roofs are common.