At one time not so long ago, most Americans lived on farms. To modern folks in city and suburb, a farmhouse may seem remote. Perhaps it’s the abandoned house on the side of the interstate: a lonely relic of another time. Or maybe it’s idealized, like a rural home created by a movie-set designer. Old farmhouses were built in many different architectural styles: I-house, Cape Cod, Greek Revival, American Foursquare, even bungalow. They range from rustic one-room dwellings to elegant plantation manors. Materials (wood, brick, or stone) often come right from the surrounding land. Plain and austere, occasionally ornamented with gingerbread, these houses rarely were designed by professional architects. Instead, they were built in true vernacular fashion by carpenters following age-old patterns and customs. 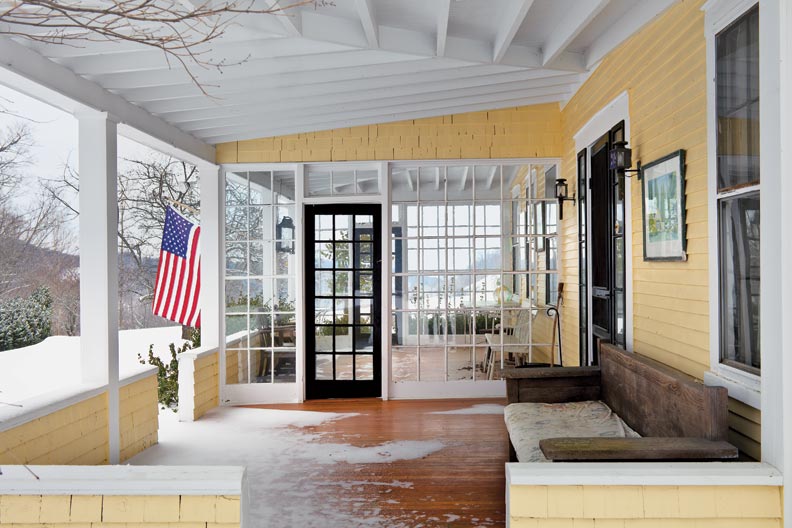 As farms often remained in a family over generations, it was assumed that the house would change and grow. Here, for example, a small house built at the beginning of the 19th century was altered in 1908. The old house is on a glorious country road that climbs above the town of Woodstock, Vermont. Here, on the thousand acres of Cloudland Farm, Bill and Cathy Emmons raise roughly a hundred head of Angus cattle. The farm dates to the 1760s; Bill’s grandfather purchased the property in 1908.

The main farmhouse, known still as Mother’s House, started out as a simple late 18th-century Cape Cod dwelling, but in 1908 underwent a substantial remodeling inside and out. A large front porch, dormers, and cedar shakes were added, along with upgraded interior woodwork that includes the high wainscot and a modified newel post on the old winder staircase. In fact, at first glance, the yellow house appears to be a ca. 1910 bungalow and not the much older building that it is.

The kitchen is iconic. Two modern stoves sitting side by side enable preparation of large meals and come in handy during canning season. The spectacular Magee cast-iron stove dates to 1908. The room is awash in the soft yellow of the cabinets, charming with its wallpaper of entwining strawberries. Open shelves hold kitchen utensils, and the country chairs are crafted of rock maple.

The couple has furnished the rest of the house with a comfortable variety of heirlooms and memorabilia, including the portrait of Bill’s mother wearing a string of pearls that presides over the dining room.

Bill explains that although his family has farmed the land for three generations, he and Cathy are the first to live here full-time. “Vermont winters are harsh, so folks moved back into the town during the off-season. It wasn’t a year-round house.” He says the place—one of the bigger farms in New England—was managed as a business. “There was a steam-powered sawmill, the butchering was done on-site, and a lot of butter and maple syrup were made here.”

Besides cattle, today the farm raises turkeys for Thanksgiving. To help keep it profitable, the family has recently added a 50-seat dining room in a post-and-beam building made from lumber harvested on the farm. The restaurant is heated by wood and serves food grown locally. This Emmons generation has taken great strides to keep Cloudland a working farm.

Steve Gross & Susan Daley are photographers specializing in architecture, interiors, gardens, travel and lifestyle. They shoot assignments and produce stories for numerous magazines as well as photograph projects for architects and designers. Their books explore the rich architectural and cultural heritage of the many regions of the U.S.