Artist and interior designer Jenny Blanchard has an uninhibited aesthetic that developed in the far-flung places she has lived. Rooms in her old Vermont farmhouse show her penchant for creating spaces that grow and change over time. The new takes its place alongside the historic, without regard for what is “proper” or “in good taste.” Jenny calls the result The Aesthetic of Joy.

“As an interior designer,” she says, “I market color. People are scared of color, afraid that things won’t match. But when clients come into my shop, they sometimes weep in response to the joyful colors.”

When she was in her twenties, Jenny worked as a refugee-camp nurse. Over the years, she’s lived in the Sudan, Burundi, Malawi, Ethiopia, the Philippines, and India. She met her Parisian husband in Khartoum, and they and their children made their home on the southern coast of France for 16 years.

“In 2002, my husband and I moved our family from France to the United States. We wanted our children to live in a place that is very American. We also wanted to be near Montreal and near skiing and boating,” she says. She recalls how the family spent a week trooping through real-estate offerings until, one gloomy day, they visited a farmhouse atop a hill in Charlotte, Vermont.

“As we entered, the sun came out and flooded all these rooms with beautiful light. We could see the views . . . all of us fell in love with the house then and there.”

Ever since, this has been home. The 4,600-square-foot farmhouse was built ca. 1892, overlooking Lake Champlain. Accompanied by several barns and outbuildings, it was an active dairy farm. The house itself used to be a half-mile closer to the lake. The owners don’t know when or why it was moved. The building was a duplex for some time; one section held the family and one side was for the hired hand. Before Jenny Blanchard’s family bought it, the house underwent a renovation that married the two sections and installed a functional new kitchen in what had been the apartment.

Drawn to art and design since childhood, Jenny runs her business, called Chez Boheme, out of one of the barns behind the house. “When we first moved to Vermont, I managed an antiques shop in Shelburne, where I was encouraged to ‘add my flair’,” she recalls about the time before she became a design professional. “I began to import exotic vintage textiles like Suzanis from Uzbekistan, African batiks, and Asian silks. I upholstered antique chairs in unusual fabrics—cowhide, Indian saris, Asian tapestries—and painted the odd dresser or desk in vibrant hues. Then, in 2010, I opened a boutique across the street, finally moving it here into one of our barns.”

Painting furniture continues to be a hallmark of her style: “I look for pieces with curves and dimension, and I love popping color against color.” In her house, a fuchsia dining room adjoins an emerald-green living room, while the walls of the den are painted a saturated blue. Furnishings include the carved bed that originally belonged to her great-grandfather, a pair of chairs that belonged to a Congolese chief and his wife, many pieces of 19th- and 20th-century country furniture brightly painted, plus Turkish tribal rugs and individualistic lighting fixtures. “I love vintage lamps with a sense of humor; they show you don’t take yourself too seriously. 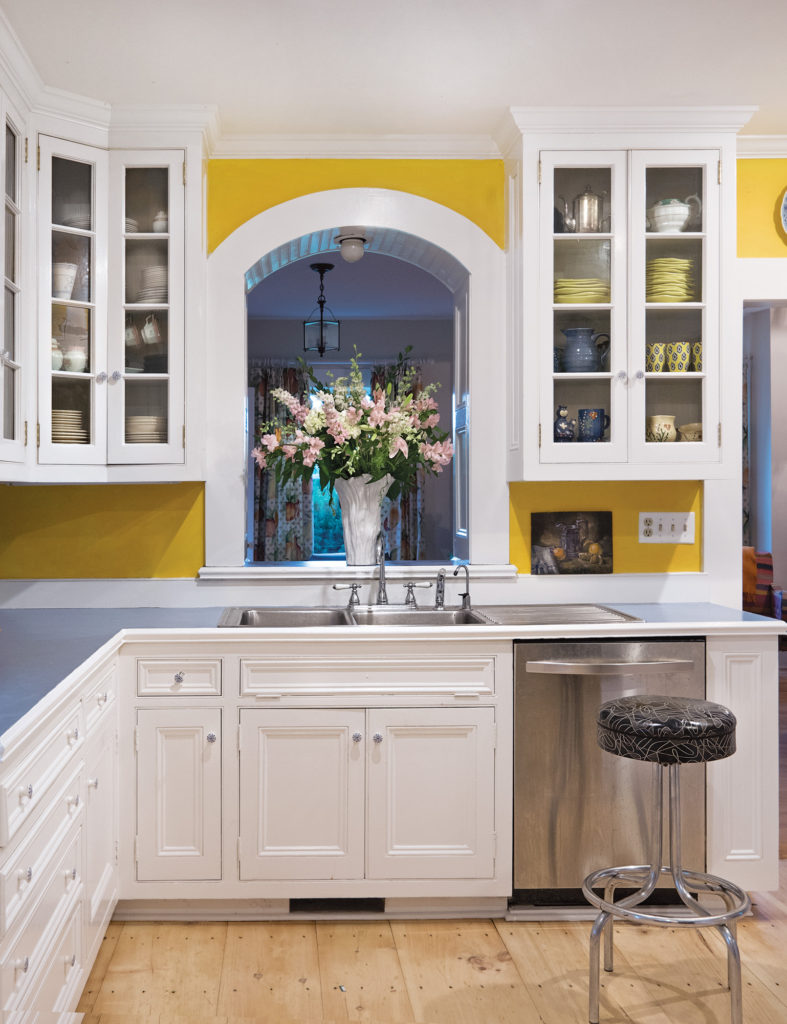 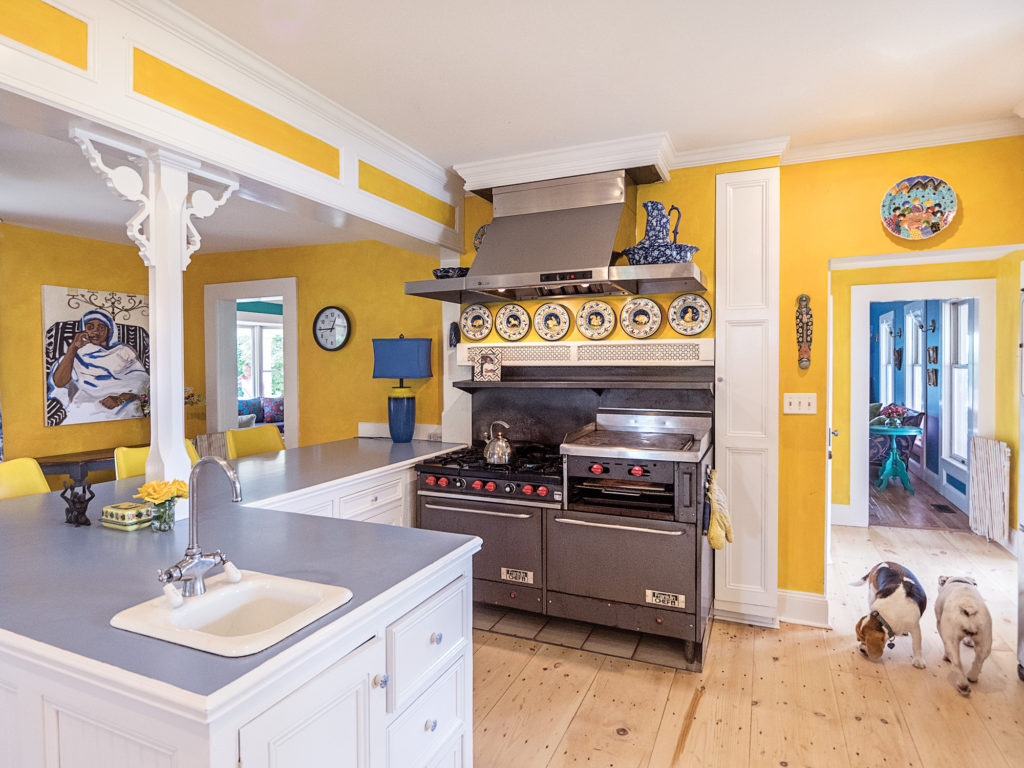 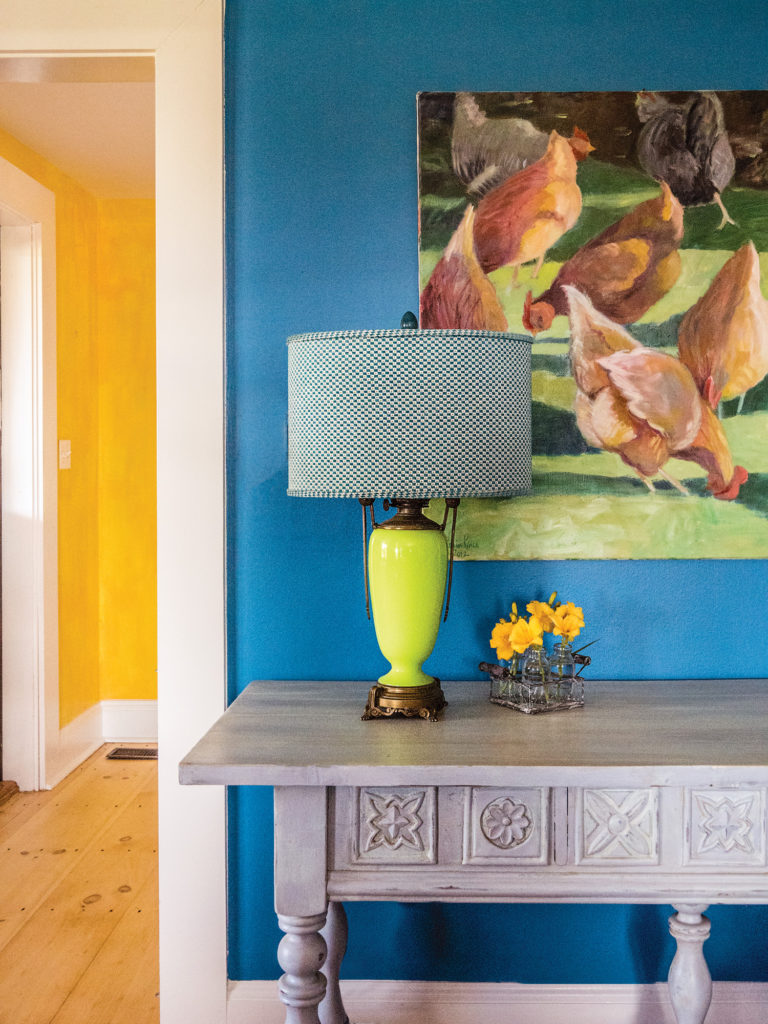 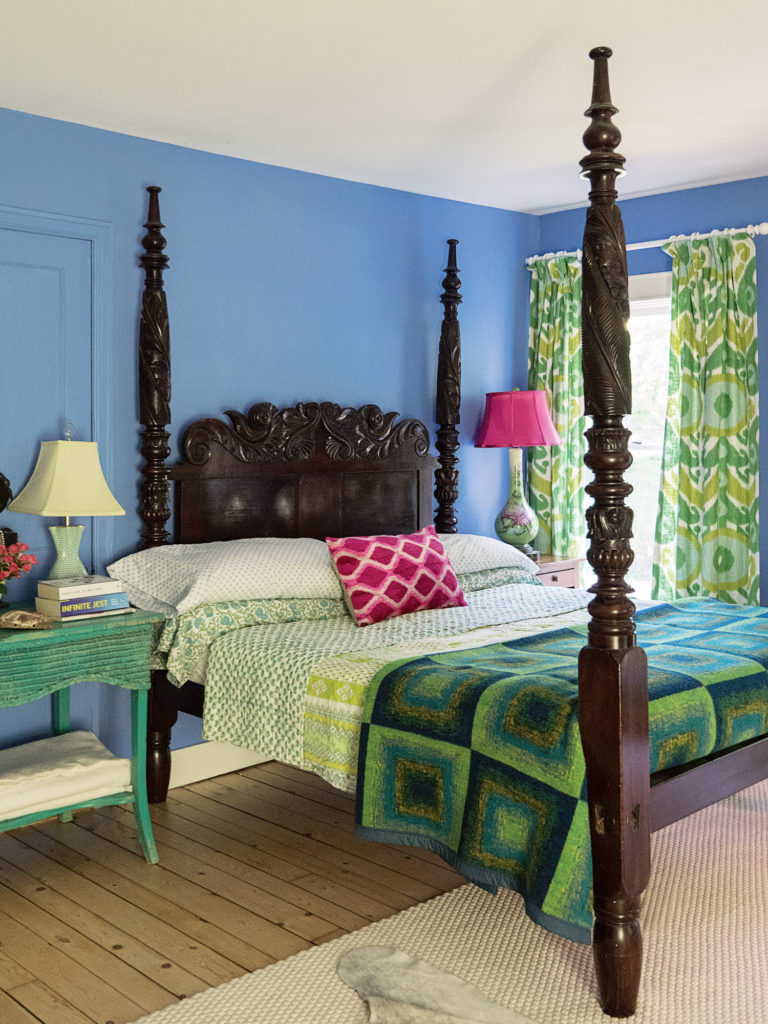 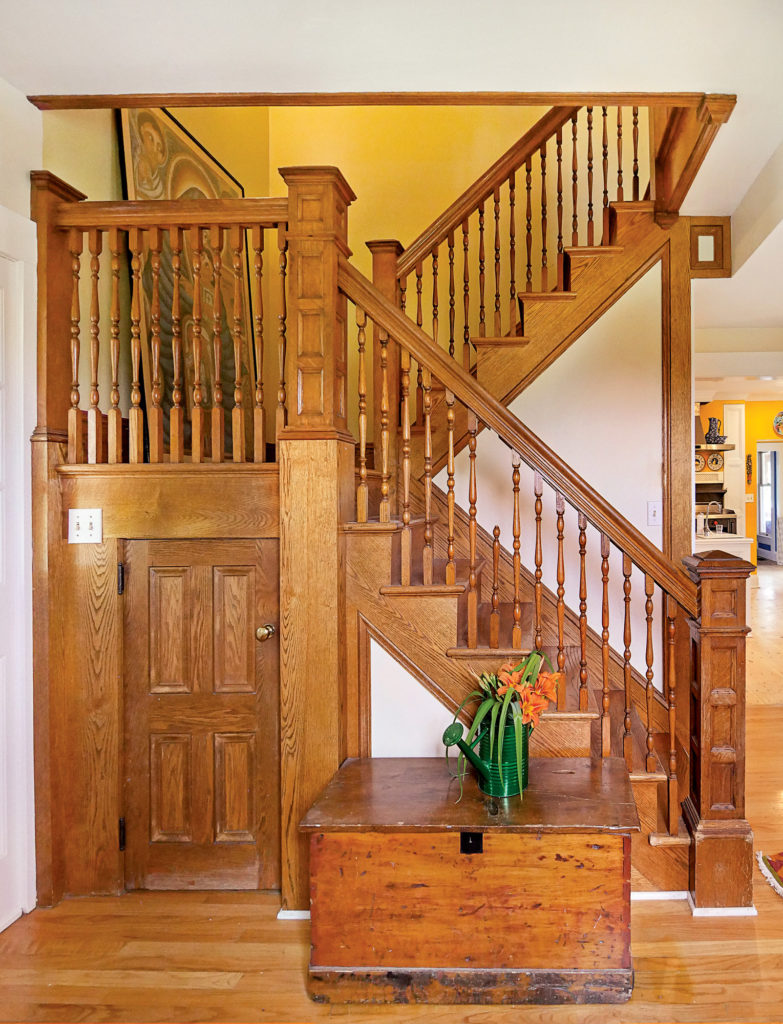 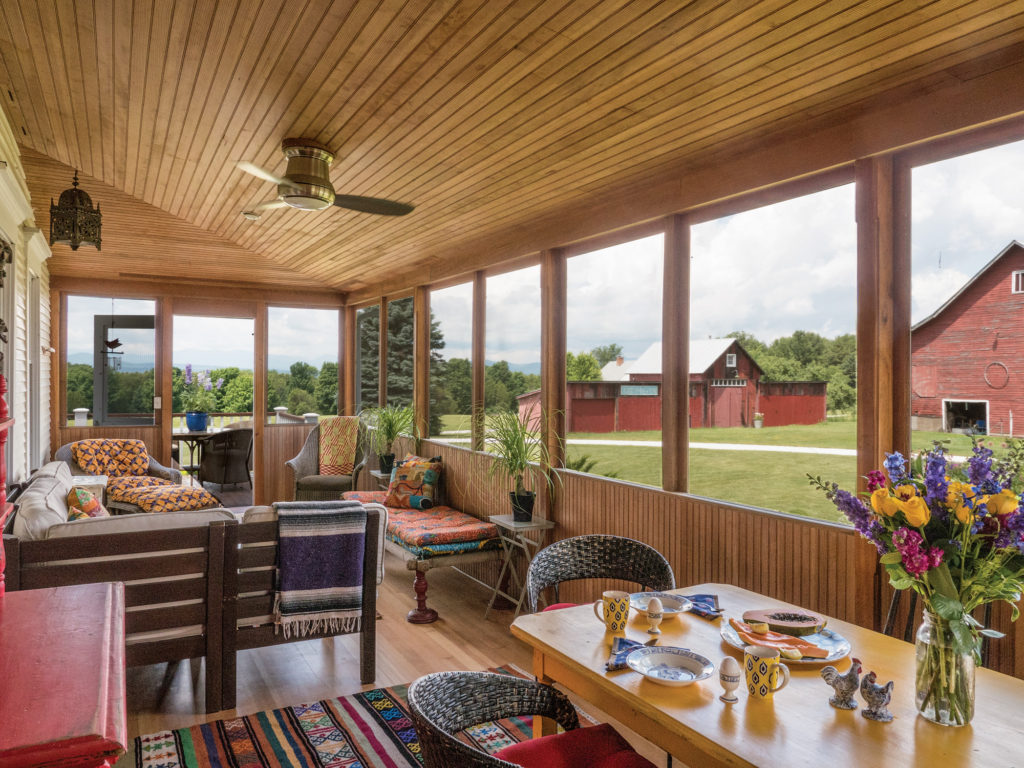 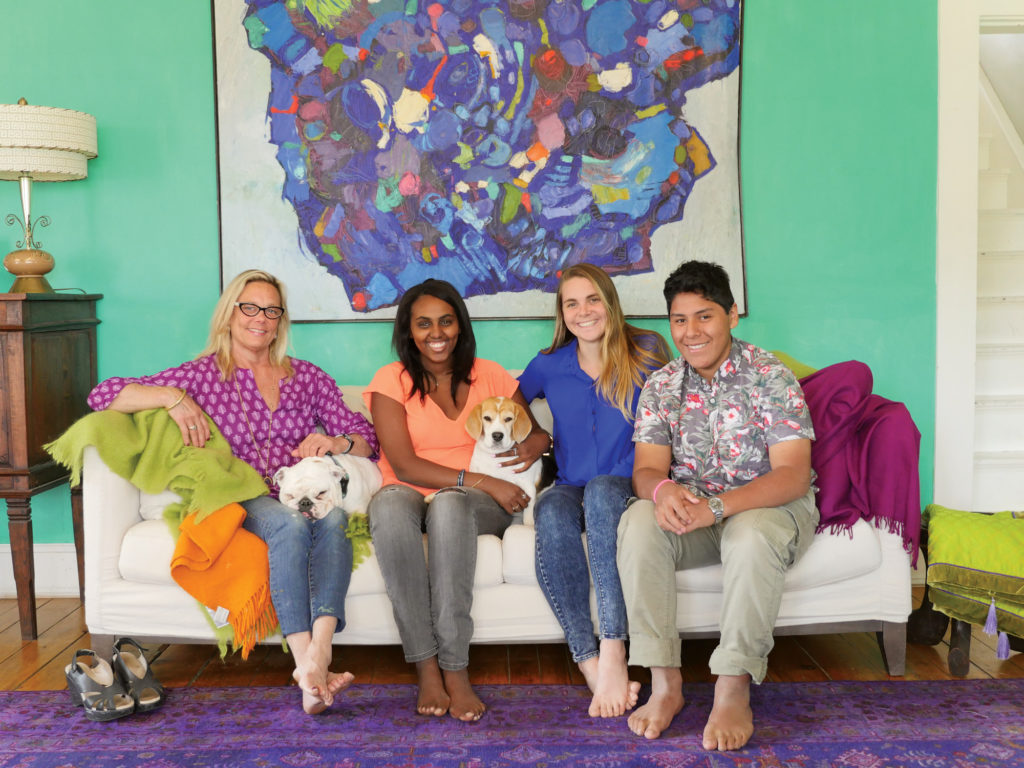 “A lot about this house is traditional,” Jenny muses. She thinks it may be that its age, its adaptability, and its simplicity encourage personal expression. Since moving to Vermont, Jenny has taken up painting; portraits of her children and of a Somali refugee woman who lives in Burlington are intrinsic parts of the farmhouse interior.

While they did little major work on the house, the family did extend and screen an open porch at the back. With new flooring, ceiling, and beaded-board walls, it functions as a family gathering place: “In summer, it’s our dining room, living room, and sitting room.” The mix includes an Indian rope bed upholstered with African fabric, and a fire engine-red sideboard next to a yellow table. “My kids are mostly away at school now,” Jenny says. “But when they get home, they say, ‘This is such a happy house!’”

The Joy of Color

Growing up in Connecticut, Jenny Blanchard learned that “a beautiful home typically has fine heirloom antiques, polished silver, coordinated designer fabrics, plush furniture, and no clutter or dust. Impeccable taste was tantamount to a social grace. But, as an artsy child with a rebellious nature, I privately cultivated an attitude of irreverence for convention in favor of the whimsical, the unexpected, and the adventurous.”

Blanchard’s home is full of saturated, unapologetic color, influenced by the hues and patterns that surrounded her in Africa and Asia. “Color is very liberating,” she says, “and a source of endless pleasure. It is amazing to see how things will go together, the more color you add. People need to be guided through that process.”

Her own preference is for jewel tones. “I never go for rust or brown or beige . . . earth tones don’t do it for me.” When she paints furniture or a wall, she uses a brush, preferring imperfection to the smooth finish of a roller, and points out that anyone can affect huge change with a can of paint. “With children who are adopted from different parts of the world, I wanted to make a home gushing with joy.”