Windows may be the eyes of the house, but that doesn’t mean that they are always in the right place or that we like everything they show us. That’s why a good designer or architect considers sight lines not only when building new but also when renovating historic houses.

“If the view is the painting and the window is the frame,” says David Heide, a Minneapolis architectural designer who works extensively in historic restoration, “think about what’s beyond the opening that still aligns with the rules of the house but also makes sense experientially when you’re inside looking out.”

Just as it makes sense to add glazing (if it had been limited) when the view is of a lake or a mountain, it also makes sense to remove or otherwise conceal a window that gives a prospect of, say, a building topped with concertina wire. Transparent or translucent glazing in doors and windows will bring light into a dark interior; opaque glass or panels minimize too-bright sunlight in a hot climate.

Another consideration is existing additions to an older building. Rather than going with the window style of the oldest part of the house, it’s usually better to work with the period and style of the addition. For example, an addition to a Colonial-era Georgian house during the early 19th-century Federal period would have had windows with the larger lights (panes) and delicate muntins typical of Federal. Today, it’s perfectly acceptable to use the same trick—introducing more modern glazing—provided it’s done well, says Massachusetts architect Mat Cummings, who specializes in historic restorations. If the new glazing is on the back of the house, further liberties may be taken, especially if the house has had many modifications throughout its history.

Fenestration (the arrangement of windows and doors on the elevations of the building), however, must stay true to the underlying design of the structure. Such elements as sills, mullions between windows, and the muntins separating divided lights (panes) should be in keeping with original details, if not an exact match. That’s true of all the new glazing shown on these pages.

A house that has survived for a century or more has had the benefit of many adaptations by its occupants, some for the worse, but usually many for the better. “I find,” says Cummings, “that the oldest houses in the country are far more functional than new ones.”

The owners of a smallish Second Empire house on Boston’s North Shore had requested a sitting area off the new master bedroom on the second floor, preferably with a beautiful prospect. Architect Mat Cummings answered with a cupola-like tower that includes broad banks of operable sash windows that not only bring light into the suite, but also afford a coveted vista. “The tower has beautiful views of the water over the rooftops of Marblehead Harbor,” Cummings says.

Crowning each bank of windows is an elliptical arch, overlaid with a grid of simulated divided lights—a nod to high-style window details dating to late 19th-century Queen Anne and Shingle Style dwellings. The windows are purposely different from those used elsewhere in the renovation, though they maintain the essence of the historic house. “I wanted the room to stand out,” says Cummings.

From this vantage point, the eye sees from the yard below into the infinite blue.

Long neglected and in disrepair, the 1924 Mediterranean-style villa in a landmarked historic district was otherwise perfect for an extended family looking to convert it into two separate living spaces. A key element in the work, designed by David Heide Design Studio, was returning the building’s signature arched casement windows to their original size and shape.

In the more traditional downstairs unit, the team recast the dining room space as a new, period-appropriate kitchen, linking it directly to the living room. The passage is a stunning set of arched, double French doors with wavy Art Nouveau muntins near the top, found during the careful “forensic demolition” of the house. A small addition—the breakfast room flooded with light—replaced the dining room eliminated by request of the clients.

Heide likes to convert any single-glazed windows to double glazing by adding a layer of vintage storm-window glass: “You get the old, wavy glass without compromising energy efficiency.”

FOOL THE EYEPatterned after the arched windows on the exterior, the French windows aren’t operable. “These are actually fixed, designed to look like doors, but the doors don’t open,” says designer David Heide. “The room’s too small.”

When a house dates to 1790 and has made it through at least one fire and had modifications in every century since, most people would throw up their hands on choosing a window style. But to architect Mat Cummings, the house’s diverse history gave him permission to play with multiple influences. “We didn’t want to play the Match Game because there was too much to match.”

Consider that the main part of the house has Federal windows with large glass panes and thin muntins. A boxy addition at the front is a full-on Arts & Crafts sunroom with folding French doors and leaded- and stained-glass windows. (See gallery lower below.) The old kitchen, with crumbling vinyl flooring and appliances that had stopped working, had no windows at all.

While doing exploratory work in the kitchen area, Cummings discovered that a dropped ceiling concealed evidence of an old timber-frame barn with large trussed beams. The architect decided to expose them and add more where sections were damaged or missing, establishing a farmhouse theme.

To bring light into the kitchen and the adjacent sitting room, he used a mix of divided-light windows: sash windows in the kitchen over the sink and taller casements in the sitting room. Around the corner in the mudroom is, in the words of the architect, a “wicked cool” round window with a keystone motif at each of four points. The room connects to yet another sunroom through a pair of refurbished sliding barn doors that are three-quarters glass. “There’s not too much we didn’t touch in the house,” says Cummings.

Despite having French doors on two sides of the room, large double windows, and a white-painted ceiling, the dining room in this 1897 Tudor Revival appeared dark and two-dimensional. A garage hard by the house meant the blinds on the window facing the table were kept closed, keeping the room perpetually dim.

David Heide Design Studio completely reconceived the wall, deepening the existing arched recess to accommodate a new, period-style buffet with art-glass cabinets and a beveled- mirror backsplash. Heide replaced the windows over the buffet with a three- panel art-glass window featuring clear and pastel translucent and bull’s-eye glass. Period double sconces on either side of the triptych play up light and the sparkle of the existing crystal chandelier. All of the extra glazing reflects and amplifies the light coming into the room.

While the rhythms of the buffet add another three-dimensional element, Heide further enhanced the room’s architectural lines with a favorite paint palette: soft cinnamon brown on walls and pale rose on the ceiling. “It makes the white on the woodwork pop,” says Heide. “You see the architecture in a different way when there is contrast between the wall and the casing.”

Before and AfterYou’d never know that the built-ins in the dining room’s niche are not original to the 1897 house. Both the delicately colored triptych window and the period sideboard witih leaded-glass doors were added. 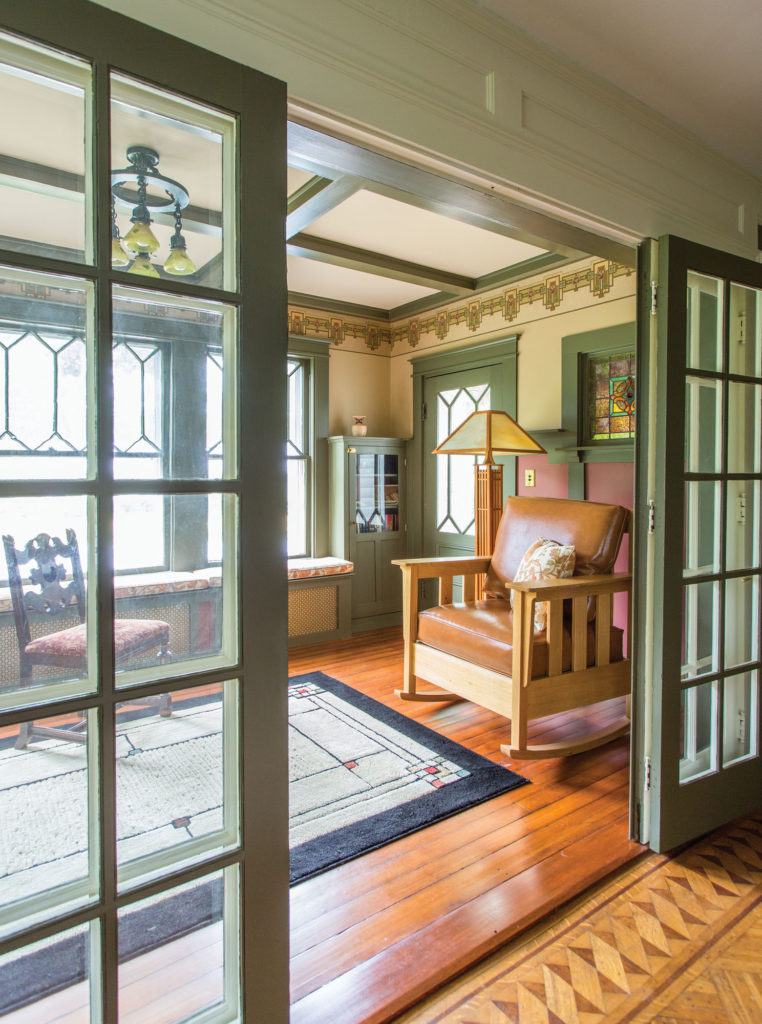 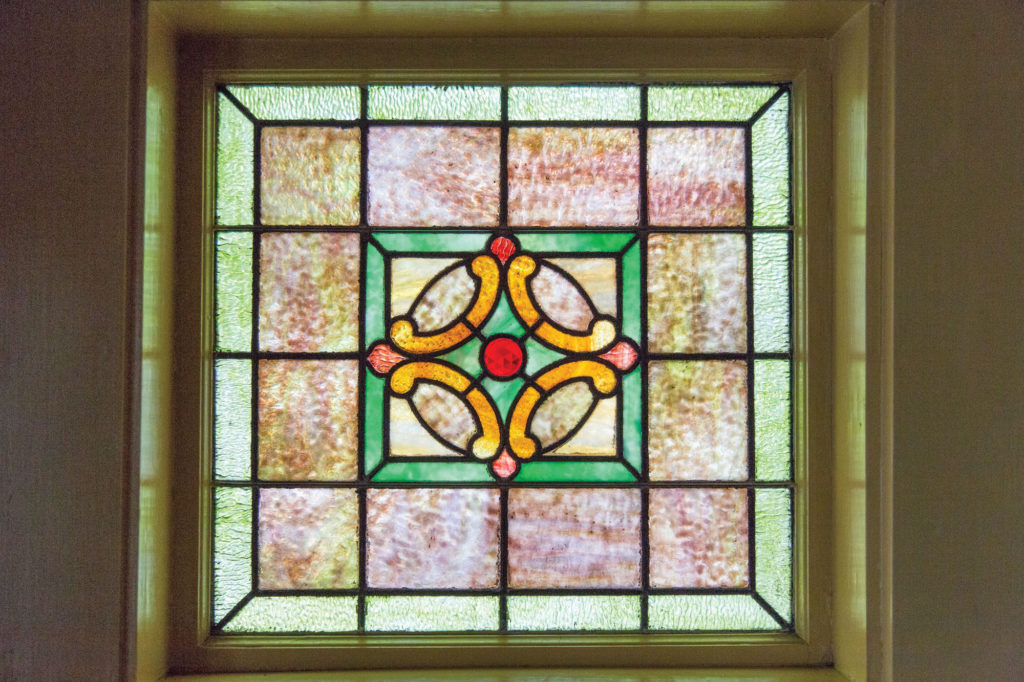