Houses built before about 1880 were lucky to have indoor plumbing, much less a bathroom exclusively for the “master” of the house. Fortunately, those with older houses have discovered many ingenious ways to include en suite baths, whether sumptuous or modest, in their homes.

Two options present themselves: conversion of existing space, or building an addition. While some conversions do indeed swallow an entire bedroom or even a full floor, other baths are chiseled out of “found” space, as under the attic eaves, or from closets, even placed in hallways.

Whether it’s tucked in or added on, treating the bathroom as an extension of living space makes the transition from the bedroom seamless. Use a complementary wallpaper pattern or related paint colors, don’t skimp on trim details, add a sconce (or chandelier), and hang pictures.

Add On or Expand

In an 1892 Queen Anne with three and a half stories, David Heide Design Studio enlarged the area adjacent to the master bedroom with a period-style bath and adjacent dressing room. Details include a roll-rimmed Roman tub, dual pedestal sinks, and a his-and-hers dressing room.

As part of the renovation of a Shingle Style house in coastal Massachusetts, the owners created a master suite filled with period details that meld effectively with the age and style of the house. Like a window seat, a Roman pedestal tub is recessed into the light-filled alcove, and built-in drawers, cubbies, and cabinets abound. Next to a marble-topped vanity with double sinks, a pair of sliding doors with leaded glass insets admit natural light from an adjacent hallway. 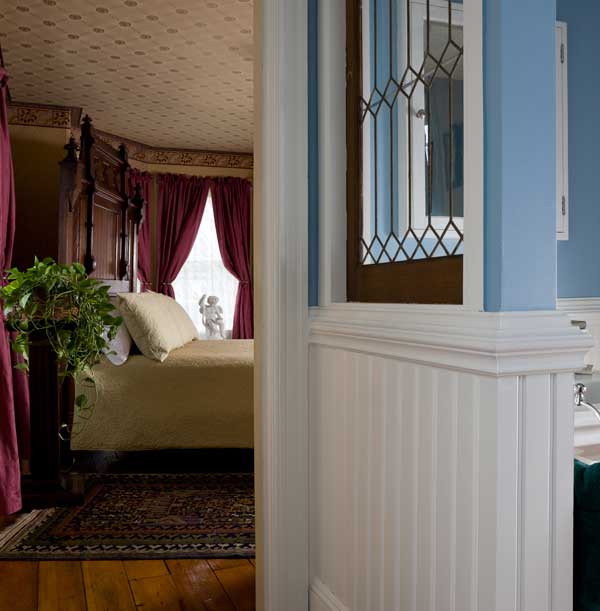 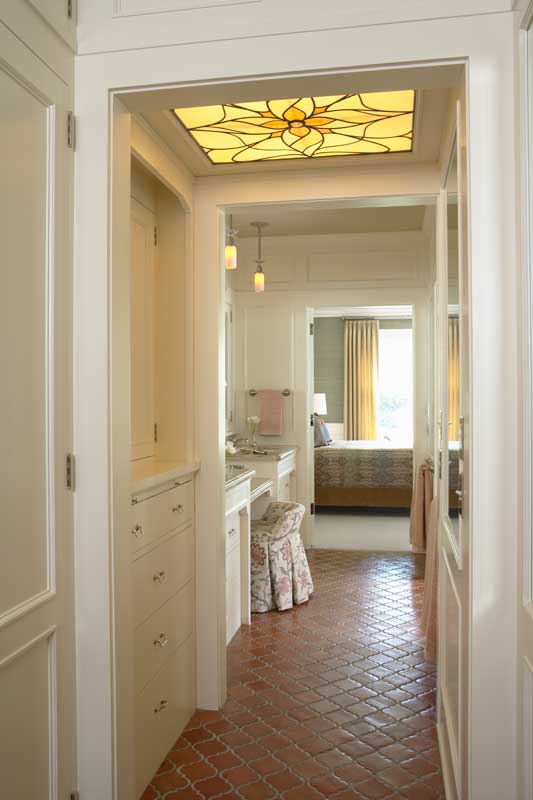 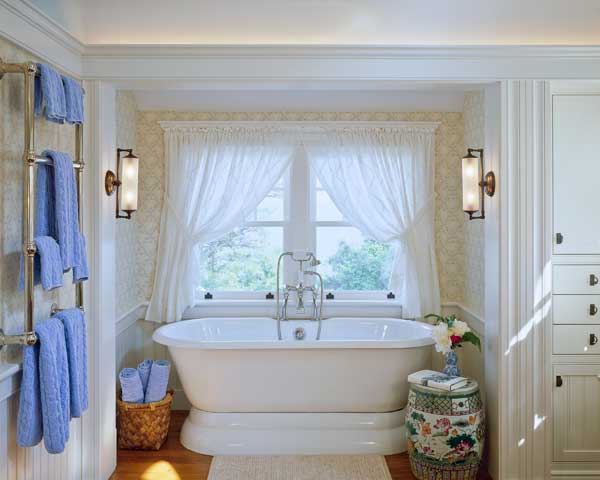 Put It in a Hallway

In a historic 1913 building with Tudor details that had been converted to condominiums in the 1970s, the goal was to return architectural integrity to the interior spaces (which included a later wing addition) while restoring period details. In remodeling the wing to create a bedroom suite, architect David Heide created a “master hallway” between the bedroom and the main bathing area. Along the comfortably wide linear space is a mirrored vanity with dual sinks, a built-in dresser, and other storage. In the tub room, decorative moldings around the mirror give tribute to a Jacobean plaster relief ceiling in the apartment’s living room. In other words, the bathroom is treated as another room, not a service area.

On the top floor of a Sears bungalow in Minneapolis, the owners turned two smallish rooms and a cramped bathroom into a miniature suite. The bathroom is tucked between the bedroom and a walk-in closet. There is one old-house compromise: access to the bath is from a short hallway off the master bedroom. Because other bedrooms are guest rooms, the owner sacrifices privacy only when visitors are sleeping in the house.

Similarly, the owners of an 1887 Queen Anne in New Jersey converted the bedroom next to their own room into a new master bath, skillfully packing it with amenities that include a shower for two and a walk-in closet. They also managed to cadge enough space for two new closets: one for linens in the hall, and a tiny one for the bedroom on the other side of the new bath. Contractor Jeff Loux removed and re-used the original floorboards and incorporated salvaged tiles, a pedestal sink, and a leaded-glass window into the retrofit.

Today's Use of Tile in Classic Kitchens

Revival Kitchen in a Queen Anne