This house is in Dunstable, Massachusetts, a hamlet with a still-rural air. Built as a traditional brick-end Federal very early in the 19th century, it grew with a gabled ell extension to the east and several screened porches added early in the 20th century.

By the time Mary and David Dacquino found the house, a side door and windows had been added to the street side, throwing off its classic symmetry. Interior partitions and extra doors divided the stately old house into a warren of spaces. But its colonial simplicity, fireplaces, and early moldings beckoned.

Mary especially liked the kitchen—a long, somewhat curious room extending half the length of the first floor. In the center sits a handsome brick hearth, a reminder, perhaps, of this space having been two rooms during the house’s time as a travelers’ inn. The large kitchen boasted three sinks and 36′ of countertop space, promising plenty of homemade pasta primavera for the couple’s army of nieces and nephews. A separate mudroom entrance at one end protects the house from any incursion by the harsh New England winter. 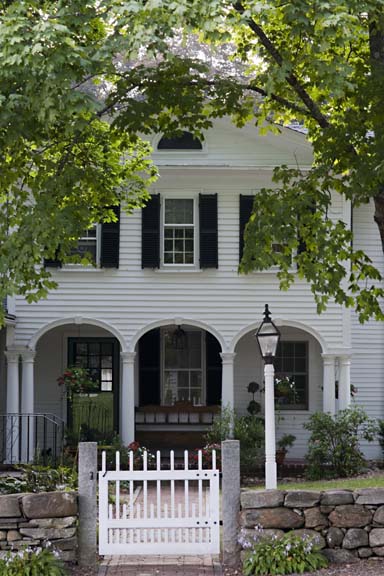 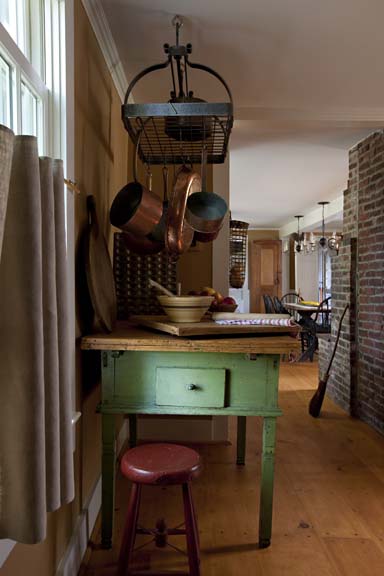 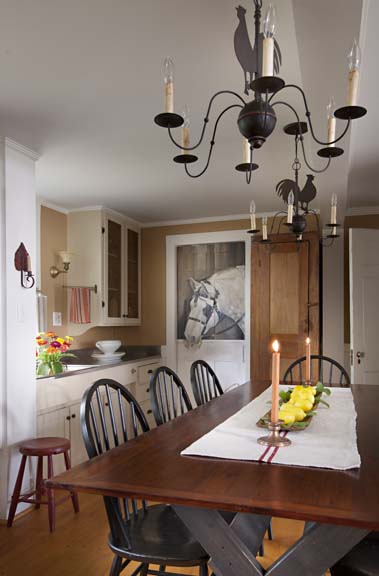 The promising room needed significant restoration. Ignoring colonial precedent in search of Tuscany, previous owners had faux-finished the walls with a yellow glaze and applied trompe-l’oeil paintings of roosters, pigs, and horses on cupboards and doors. The navy-blue ceramic tile floor was out of character and out of plumb, with tiles cracking. Mary and David began work with the floor; after removing additional layers of asbestos tile, linoleum, and vinyl, they found the underlying wood floorboards unsalvageable. A new floor of wide pine planks was properly laid. Particleboard cabinets were replaced with simple, Shaker-influenced units made in ash by a local cabinetmaker and painted in historic colors.

Countertops now are a practical combination of soapstone and reclaimed 200-year-old chestnut. They kept the old sinks of stainless steel and copper. Mary, an accomplished cook, insisted on a commercial Viking stove. To keep the ventilation from looking too modern, a new soffit with an antique pediment camouflages the vent above. Behind the range, a veneer of antique-style brick integrates with 19th-century English mosaic tiles, which continue above the counters.

Architectural salvage and antiques furnish the room. An 8′-long sawbuck table was custom-made from old barn boards on the property. A mid-19th-century pine worktable with apple green legs became a perfect workstation by the stove. Ironstone and yellow ware; vintage copper pots, pans, and chocolate molds; a rusty bread sign from an old bakery; and café curtains made from mangle cloths create the look and feel of an early New England kitchen.

The mudroom at the north end likewise needed a total makeover. Housed in a two-story ell added by previous homeowners, the addition had a hipped roof that didn’t belong. Mary and David reconfigured it into a larger, more functional addition, making room for a pantry and powder room as well as a 16′ x 8′ mudroom downstairs, and a bedroom and bath upstairs. The back porch now has a flat roof and decorative balustrades milled to match those on the front porch, which ties the addition into the main house.

8 Ways to Design a Kitchen for an Early House

Friendly Kitchen in a 1912 Foursquare