What happens when traditional architectural details blend with modern-day amenities? You get a homestead with tons of old-house feel without any of the Old World antiquity—exactly what the owners had in mind when purchasing land to build their home-away-from-home. Today, nestled in the hilltop pines of east central Vermont sits their authentic reproduction farmhouse.

“The isolation creates a sense of removal from the world around us, a sort of stepping back in time,” says Doug Gest, president and owner of Doug Gest Restorations of Hartland, Vermont. He and his staff were asked by the owners to make their dream home come true. Finished almost three years ago, the project took one and half years to complete. “Not too bad for a custom-designed, hand-built farmhouse just under 5,000 square feet in the middle of nowhere,” says Gest.

Yet it’s in the heart of the house where a new old kitchen lies that sets the house apart. Doug and his team, which included co-designer Mark Head, created a comfortable space that is both functional and beautiful, thus complementing and completing the home’s new old house style. 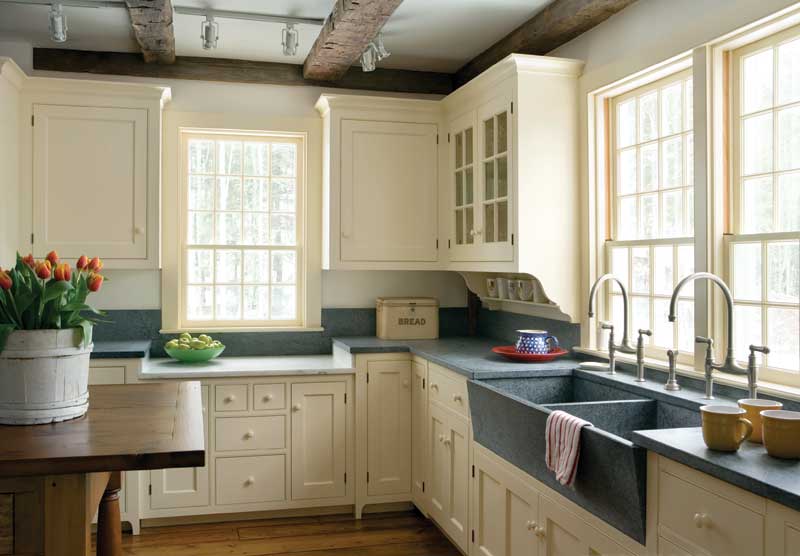 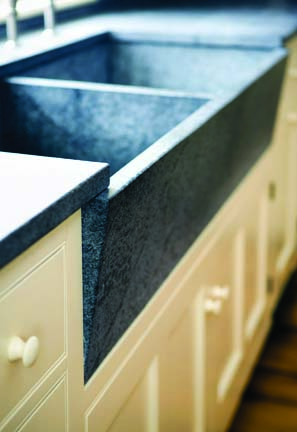 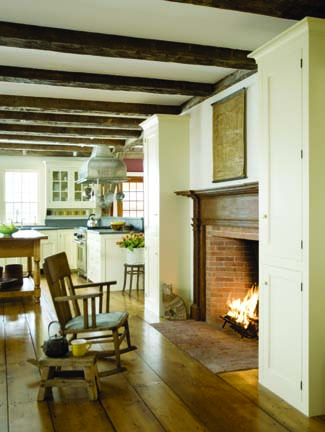 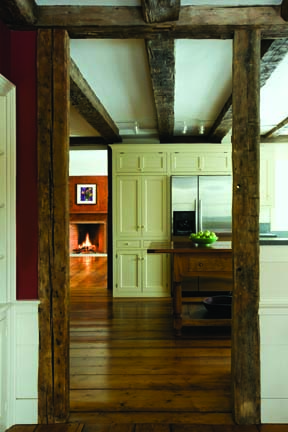 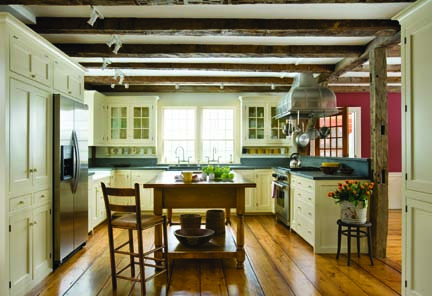 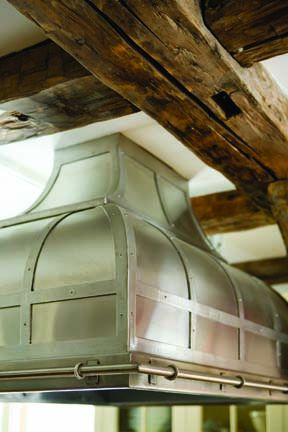 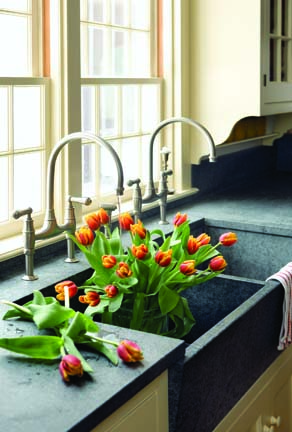 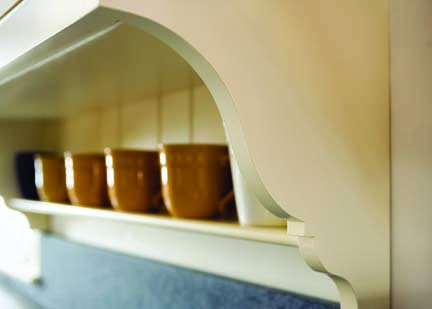 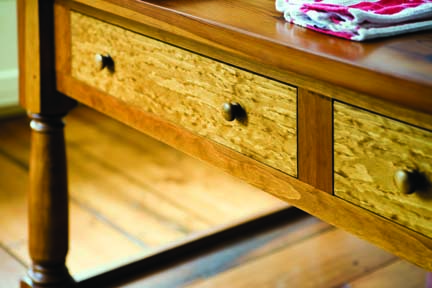 At the start of any project, Doug likes to think they’re building not just a house but a home. “It should be more like a retreat where one feels secure and settled—a place to rejuvenate and regenerate.”

To create that old-home feel, the initial design centered around the frame of a turn-of-the-nineteenth-century Cape house found in Sunapee, New Hampshire, which was dismantled and then reassembled at the new building site in Vermont.

All that was missing were some of the interior details. Again, this was accomplished by purchasing some original late-seventeenth/early-eighteenth-century millwork—including pine mantels—from a home being demolished in northern Massachusetts.

Blending the larger wood elements of the first house with the classic details of the second house helped re-create, in a sense, a home with an old-house “patina.” “Specific color and aesthetic qualities when mixed create a sense of place that is believably older,” explains Doug. He summarizes, “The idea was to create a welcoming home through the right combination and balance of space, colors, light, and materials.”

Design in the Details

In the design planning phase, which lasted just short of seven months, Doug questioned everything the owners planned to do with the kitchen space—what kind of living, working, cooking, baking, and entertaining.

“The fact that one owner really liked to bake led us to incorporate a baking prep cabinet at a lower working height, covered in marble of her choice,” describes Doug. “That particular workspace is located under a window looking out over the patio area, creating a special feature.”

Little did they know how many special features would be added. As the lot was cleared, sight lines over the treetops exposed glimpses of Smarts Mountain in Lyme, New Hampshire. Naturally, the owners asked Doug and Mark to create some additional windows to accommodate the panoramic views.

As the size of the home grew, so did the number of windows, many for just the kitchen alone. Almost 40 reproduction windows were built—all with mortise-and-tenon joinery, true divided panes, and more than 30 percent original period glass retrieved from the originally demolished home.

Despite the positive progress and everyone’s mutual input, the project was not without some difficulty. “The owners were very involved in all the design work—especially the kitchen—wanting it to not only look good but function well,” recalls Doug. “The only unexpected impasse was their desire for modern appliances with a stainless steel finish.” The resulting design challenge was to fit the old farmhouse theme with new-house amenities.

“In all reality,” concedes Doug, “we needed to let go of any preconceived ideas that modern stainless steel doesn’t belong. In this particular project—because of the ‘old-house’ materials and the larger scale of the room—the stainless steel finish was a nice enhancement.”

From the reconstructed windows came small design elements for the kitchen cabinet doors, fabricated out of maple by head carpenter Ken Grace in the company’s workshop (The Joiners Shop, in Hartland, Vermont). All the countertops were made of soapstone quarried from Vermont; the smooth, dark finish complements the commercial-grade six-burner range by Wolf. In the center of the kitchen is a farmer’s worktable, built from old planks from a barn floor and finished with an oil pigment stain and wax mixture and covered in satin polyurethane.

But the cornerstone of the space is the center chimney fireplace, book-ended with floor-to-ceiling storage cabinets that match the rest of the kitchen (and one of three fireplaces that help add heat and ambience to the adjoining dining room and den). “They are finished with antique brick and the old pine mantels we procured from the old Cape,” says Doug.

Reflecting on the completion of another custom-built project, Doug stipulates that it’s not just the day-to-day choices challenging builders and owners alike but a far more grave undercurrent of confronting concern.

“Unfortunately, architects and builders have tended to oversimplify details through suburbanization. What we’ve tried to do is get back to preservation of traditional design features through thoughtful and sensitive respect of classic details. Part of the craft is to reinterpret where modern amenities meet Old World charm and where aesthetics meet utility and function.”

In this new old Vermont homestead’s kitchen, a warm fire reflects light on that successful accomplishment.