There are few features in old houses more underappreciated than the stairs. We might admire their handsome balustrades and swoon over their spiral forms, but we’re also likely to abuse them without so much as a second thought—tromping up and down them like stampeding elephants, or tugging heavy items over them one step at a time. It’s no wonder that after 50 or 100 years of daily wear, stairs often creak and groan, and can even begin to come apart at the seams. But with a brief primer on how to approach common problems, you can repair your stairs and make them good as new.

Many things can go wrong with your stairs. They can squeak or loosen between treads, and stairwells attached on only one side—known as open stairs—can even begin to separate from the wall. To diagnose problems, start with a visual inspection for gaps, and a walking test to feel out any movement (or give) and to identify the location of squeaks. The good news is that most problems are familiar to a competent carpenter. The bad news is that the plaster or paneling (or whatever else covers the underside of the stairs) must be removed in order to reach the problem. Frequently, the 2x4s at the sides that hold up the ceiling (the underneath part of the top stair) must also come off; save them for putting the ceiling back. Once the cover is removed and the stair’s innards are laid bare, repairs won’t seem so daunting. (Repairing the hole you’ve created usually isn’t too difficult, either). 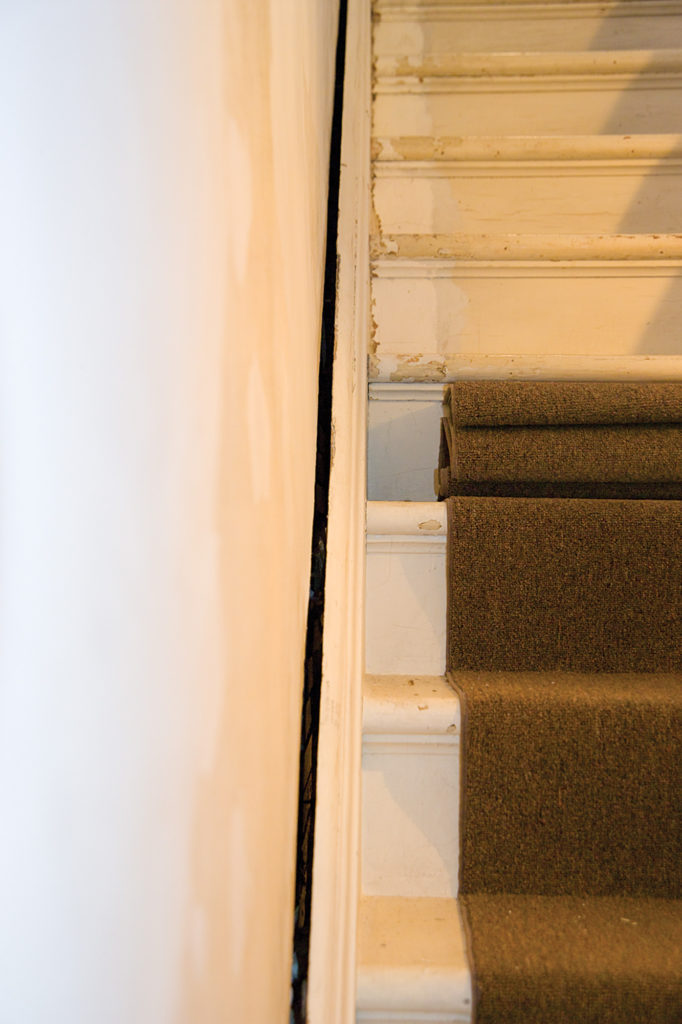 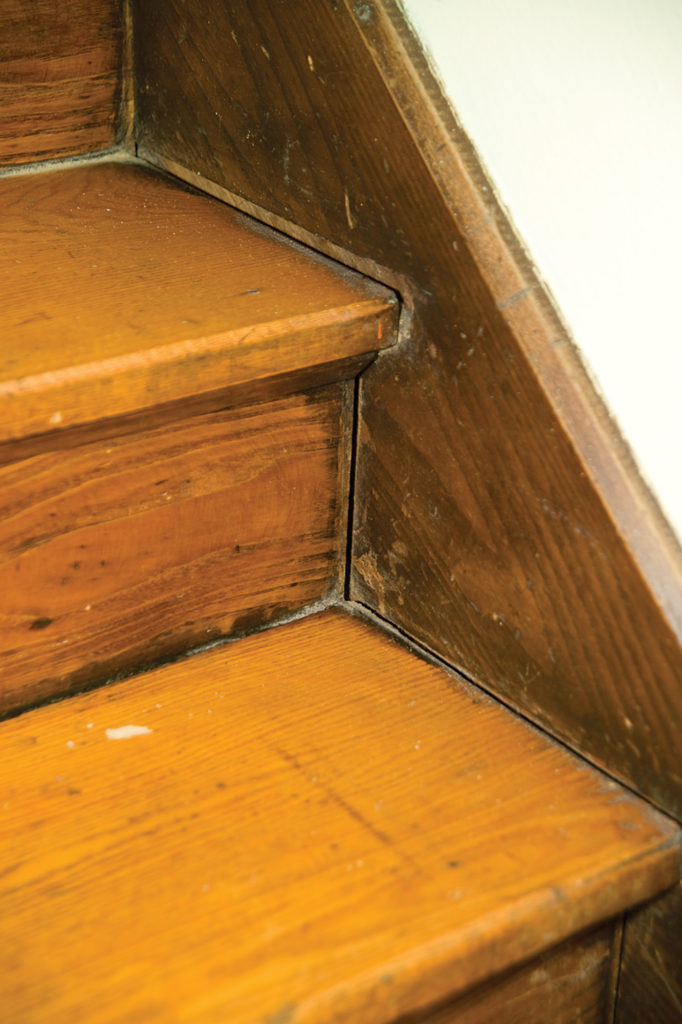 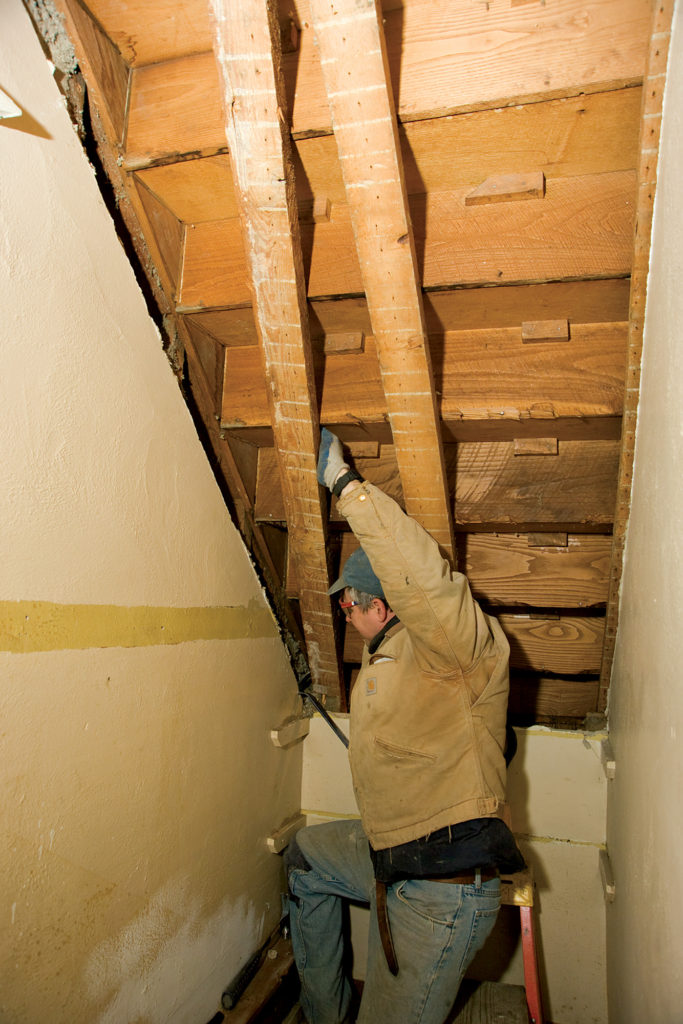 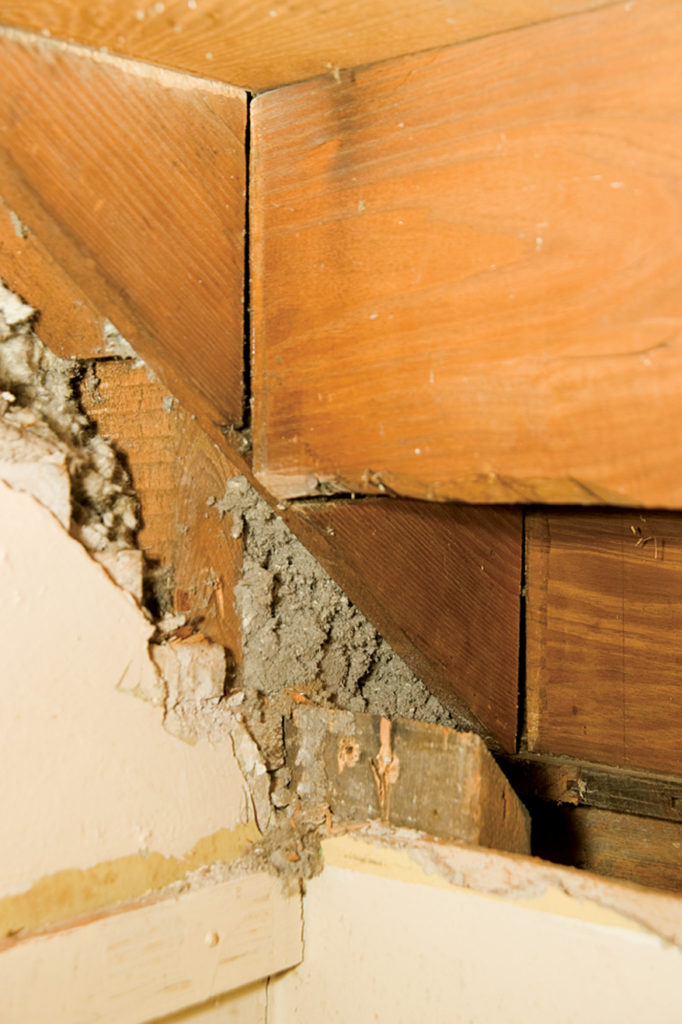 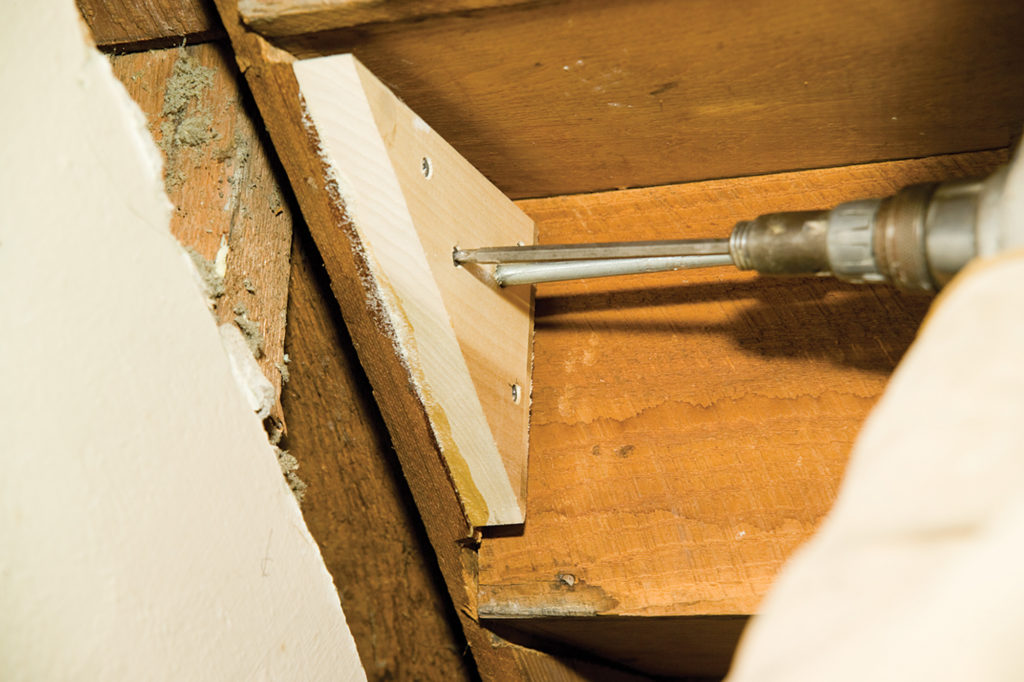 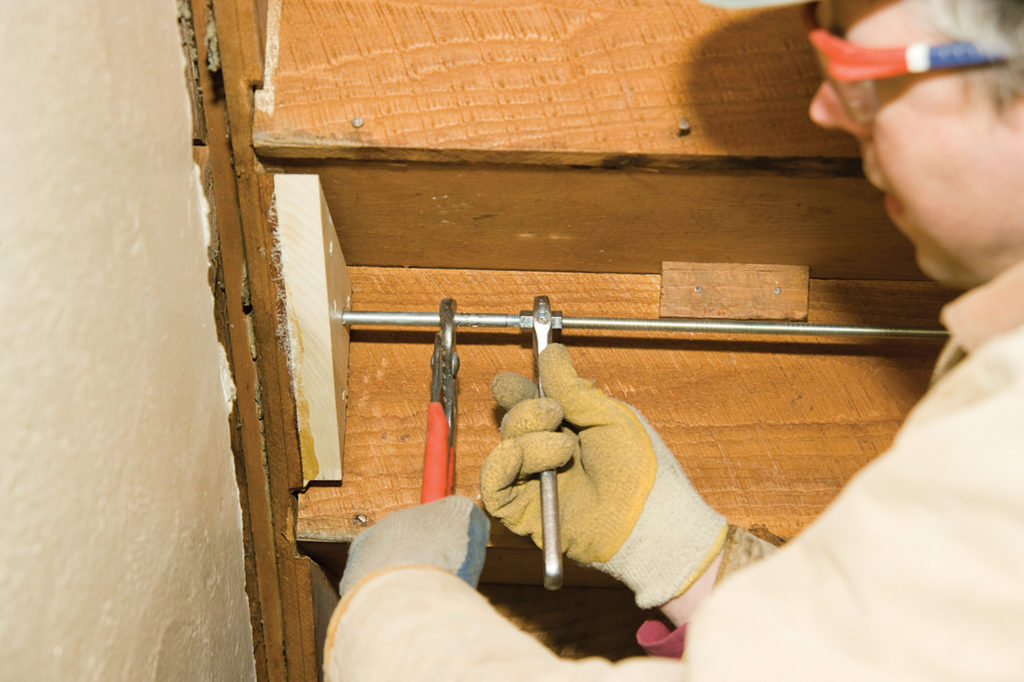 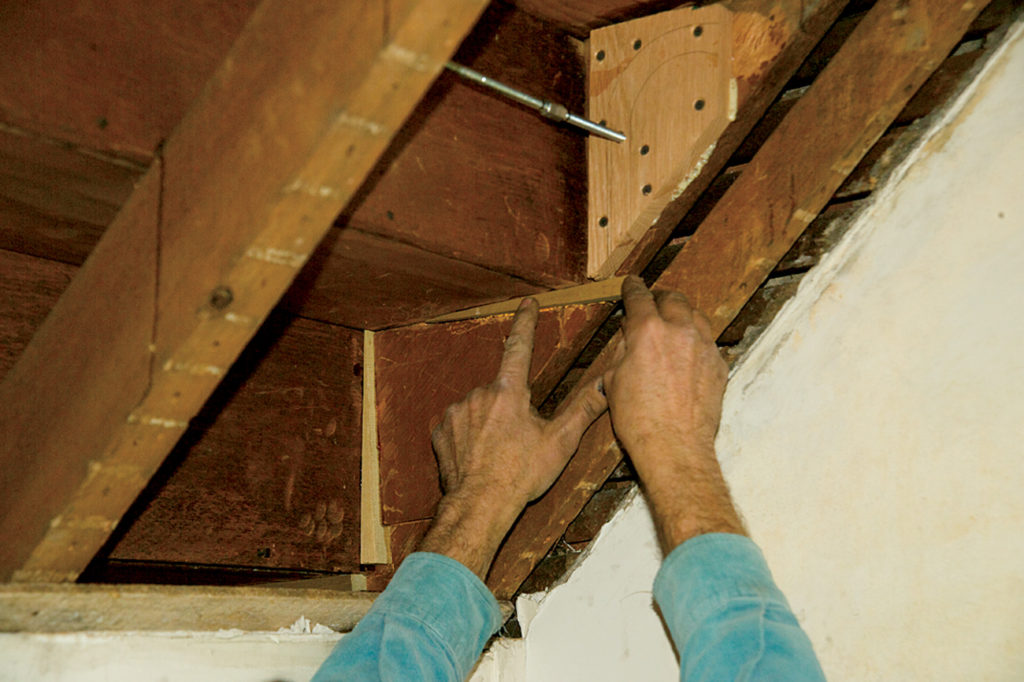 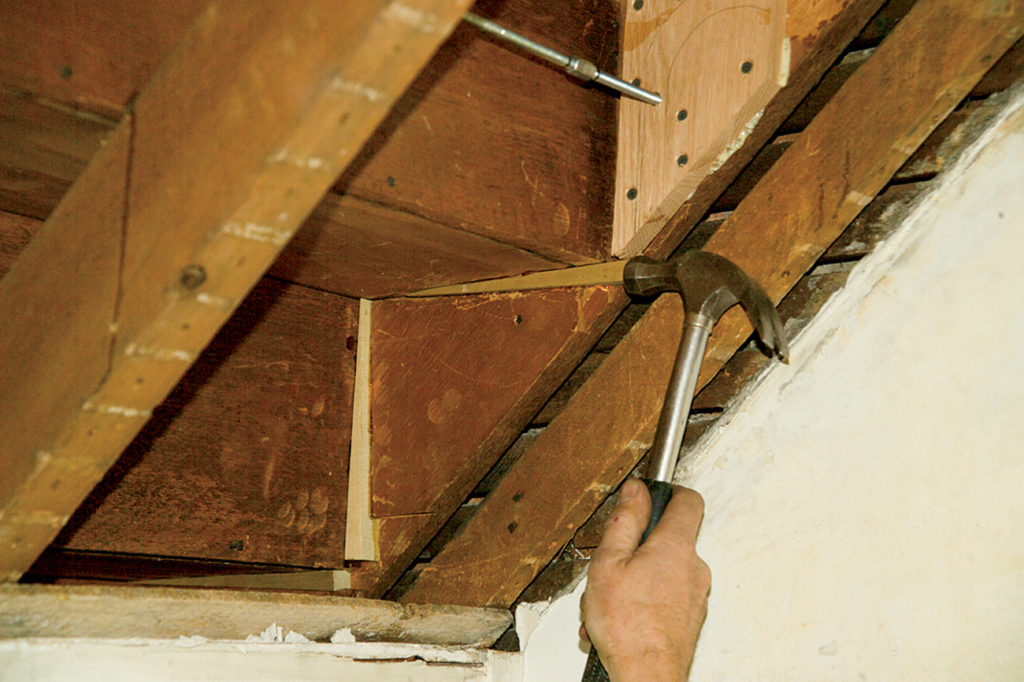 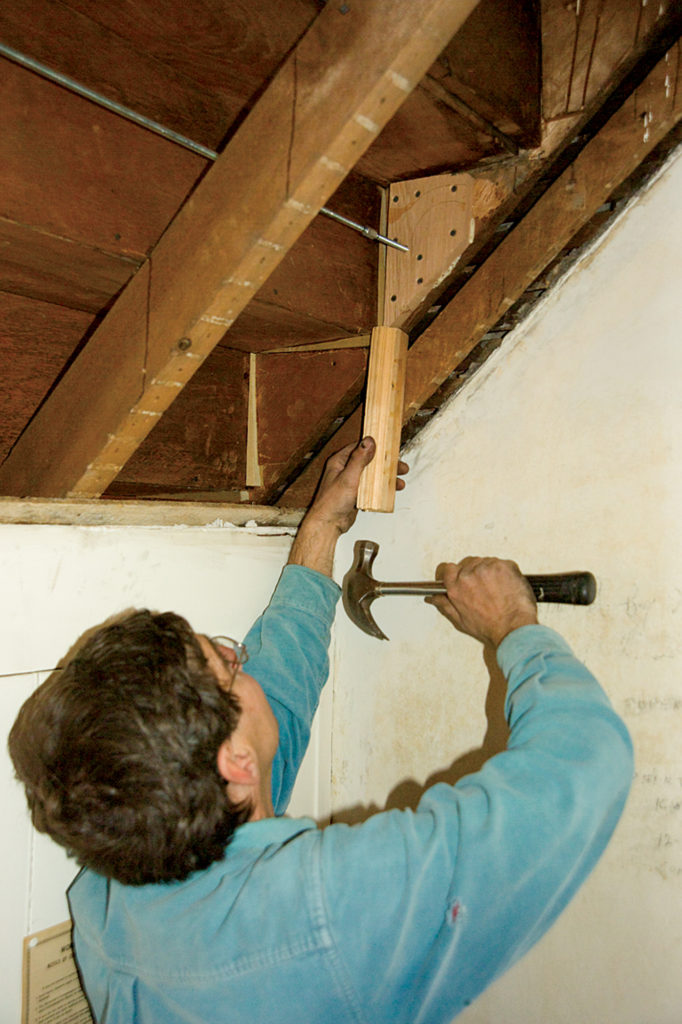 Stringers are the diagonal members of the stairs abutting the treads and risers, and while it’s not usually obvious, both treads and risers are slotted into a pocket inside them. If for any reason the stringers spread apart, the treads and risers will loosen and, in some cases, pull out of their housings. This doesn’t happen very often on closed stairwells (stairs with walls on both sides), but open stairwells can experience stringer spread for a number of reasons: House settling, wall movement, inappropriate repairs, and poor original workmanship are all common culprits. The trick is to pull the stringers back together and keep them that way.

To close gaps caused by stringer spread, start by cleaning debris from the stringer housings (the dado or groove where they fit). Remove nails, wood splinters, paint chips, or glue from the lower and upper sides; finish with a blast of compressed air. You’re now ready to pull the stairs back together using 3/8″ threaded rod, carriage bolts, and threaded couplings. Start by drilling a 3/8″ hole in a block of hardwood. Next, counterbore a hole large enough to accept the carriage bolt head at the block’s backside, where the rod will terminate. Determine the original (or appropriate) width of the stairs, and calculate the length of the threaded rod and bolts, leaving enough room to tighten the threads into the coupling. Insert the rod through the block into the countersunk bolt, then attach the block to the wall-side stringer using polyurethane glue and screws. At the opposing spot on the open stringer, attach the block and bolt, taking care not to allow the screws to penetrate the visible side of the stringer.

For the next step, you’ll need two people: one to tighten the bolts and rods into the coupling, another to guide the stairs and risers into their housings. Use a wrench to turn the coupler and visegrips to turn the carriage bolt. It might take several attempts and some vigorous pounding before the loose elements can be pulled back together.

Stair treads and risers generally aren’t nailed into place. Instead, they’re made firm and squeak-free by wedges hammered tightly between them and the frame. Once you can see the underside of the stairs, you might find wedges that have fallen out or are loose and easily dislodged (a likely source of squeaks). If these wedges seem intact, they can be reused. Clean off dust and old glue as best you can, apply a layer of polyurethane glue, then hammer them into place. If wedges need replacing, find replacements that match the originals in size and shape. Hammer wedges tightly; you can also use a short, thin nail to secure them. If the connection of the stair tread to the riser is loose or not joined, screw them together by first drilling a pilot hole and then installing the screw. Before replacing the ceiling, be sure to walk, dance, or bound up and down the stairs to be sure you’ve cured as many of the squeaks as possible.

Up Against the Wall

Once the stairs are more or less intact and wedges secured, stairwells that have pulled away from the wall will need to be reattached. Typically, a few lag bolts will do the trick, but if the walls have bowed or have moved out of plumb, the attachment will be trickier. You’ll need to shim between the stringer and the studs in order to firm up the stringer-to-studs attachment, then attach the lag bolts through the studs. Cover any remaining cracks at the wall stringer by filling them in with caulking, or hiding them with a piece of quarter round or cove molding.