The seller was the Austin, Texas, home’s second owner. The first had been the renowned mid-century architect Charles Granger; this was the home Granger had built for himself and his family in 1952. Fortunately for Mark and Jeff, they had seen that PBS special. They would become the home’s third and current owners. 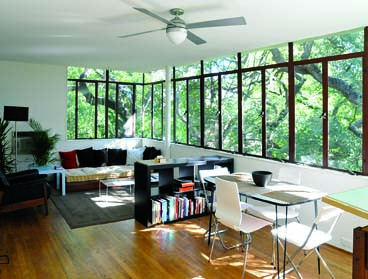 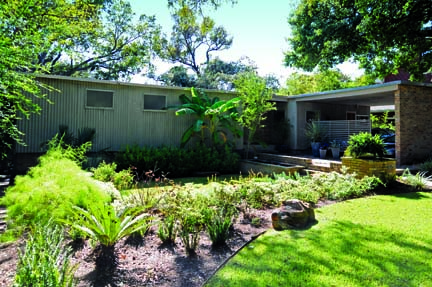 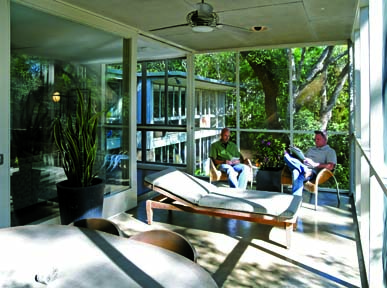 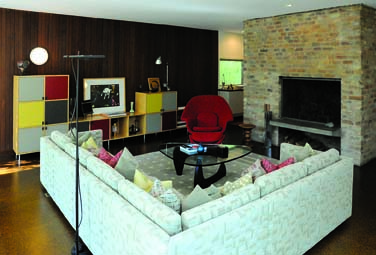 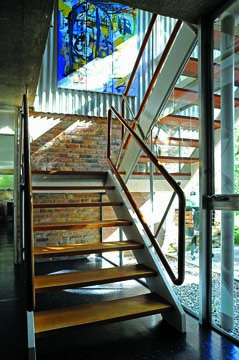 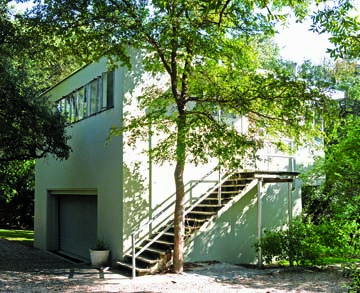 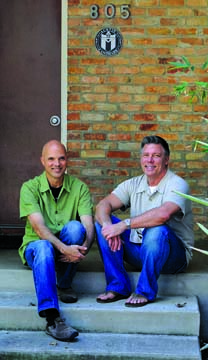 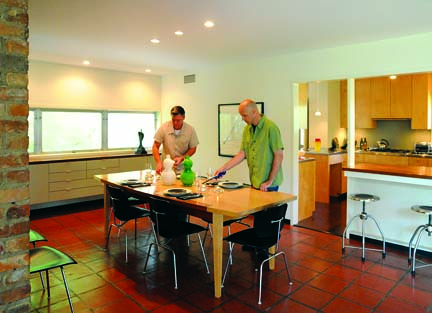 Truth be told, Mark and Jeff didn’t buy the house for its impressive pedigree. They bought it because it was a cool house. Viewed from the street, the house is unassuming, almost drab. “But the minute I walked in the doors…” Jeff says. The front door is like a portal from drab to dreamy, and the effect can render a person speechless. On the inside, a back wall of second-story windows feels celestial. Live oaks filter the Texas sun and, even at rush hour, the songs of birds whizzing by at eye level drown out the downtown traffic. It’s like being in a treehouse in the middle of the city. Jeff, an electrical engineer by trade and architecture aficionado by passion, and Mark, who manages interpreting services for deaf people, were smitten.

Today, their love for the house runs deeper than its artifice. Shepherding the home into old age is a responsibility they take seriously. “We’re stewards of it,” says Jeff. That responsibility motivates careful decision-making. “What might Granger have done if he was alive today?” asks Mark.

Soon after purchasing the house, Jeff and Mark did their homework. They took a trip—“a pilgrimage,” they call it—to Los Angeles, “a hotbed of this type of architecture,” says Jeff. Back home, he and Mark researched Granger’s work at Austin’s history center, noting which other buildings around town his firm, Fehr & Granger, had designed. They also hired an expert, Jay Farrell, an Austin architect whose personal interest in mid-century architecture had inspired him to rent the home’s garage apartment for six months, years ago.

All of the information they gathered informed their decisions about how to restore their own Granger design. Ultimately, they have updated some of the home’s features and refurbished others. With every decision they’ve made, Granger’s spirit and, more broadly, that of the mid-century modern aesthetic have been foremost in their minds.

A key tenet of the period was, as Jeff describes it, “the whole outside-in concept, the outdoors flowing into the inside.” Granger applied this idea throughout the house, notably in its entryway, where the large, corrugated asbestos tiles that form the exterior siding extend inside the windows flanking the front door. But the home’s previous owners had painted the gray tiles in thick white paint on the inside, creating visual separation between indoors and out. “Those walls absolutely had to be stripped of paint,” explains Jeff.

It’s a good thing he was motivated, because the stripping didn’t come easy. “Stripping lead paint off asbestos walls?” he laughs today, though it seems unlikely that he found the situation laughable at the time. Not wanting to scrape the asbestos, he relied on chemical strippers, experimenting with many different ones. In the end, he patiently stripped one square foot at a time, using multiple products and carefully shielding the floors from drips.

The mid-century aesthetic again provided guidance when Jeff and Mark addressed the home’s kitchen. With a shuttered pass-through window and a swinging door separating it from the dining room, it was decidedly closed-off; opening it to facilitate today’s less formal entertaining style was tempting. “And then we realized, well, no,” Jeff recalls. “That’s not what this house is.” So while they removed the door and shutters and modernized most of the kitchen’s interior workings (installing new appliances and adding custom maple-veneer cabinets, stainless steel countertops, and dark cork flooring), the feel of the isolated 1950s kitchen remains intact.

Even seemingly tiny design decisions merited lengthy consideration, as Mark and Jeff strived to remain true to Granger’s intended aesthetic. “See the frame around the window?” Mark asks, pointing to a thin strip of wood separating drywall from glass. “That decision took probably two hours.” Unable to replicate the house’s original wood paneling, they had installed drywall in its place. The edges of drywall, however, aren’t clean like those of cut wood. “The panel just came right up to the edge, and there was no trim,” explains Jeff. They called in Jay, the architect, for consultation on issues like these. “If we didn’t have Jay working with us, we probably would have ended up with something clunky,” Jeff says.

Another important player in the home’s revival turned out to be the son of Granger’s partner, Arthur Fehr. Having read about the home’s new owners in a newspaper article, the younger Fehr visited Jeff and Mark at home. During Fehr’s visit, conversation turned to the obvious absence of one of the corrugated asbestos tiles from the house’s front façade. (Jeff and Mark have no idea what happened to it; it was already gone when they purchased the home.) The tar-paper layer behind the tile made a black square on the house’s otherwise featureless front wall. Fehr’s own childhood home, designed by his father, had borne the same siding. His mother had always hated it, though, so when his father passed away, she promptly replaced it. A couple of weeks after his first visit, Fehr returned with a piece of the siding he’d salvaged from a scrap pile. “Our contractor fit it in,” says Jeff. “You’d never know. It was pretty serendipitous.”

In 2006, with the help of a University of Texas architecture student, Jeff and Mark successfully petitioned to have their home listed on the National Register of Historic Places. In celebration, they hosted a cocktail party, inviting Granger’s three living children, all still Austin residents. (A fourth child died along with Granger and his wife in a car accident in 1966.) They brought their own young children to see their grandfather’s work. “I think they were really thrilled,” says Jeff, smiling. The younger Grangers’ satisfaction is the closest thing Jeff and Mark can hope for to approval from Charles Granger himself. And his approval would be, to them, the ultimate reward for their efforts.