“After I bought this house in 2011, I panicked,” admits Jan Blomstrann. As chairwoman and CEO of Renewable NRG Systems, she knew that her home had to be energy efficient. (“We make support tools for the wind and solar energy industries,” she explains.) The house she’d fallen for was a drafty folk Queen Anne built in 1894. All the windows were rotted. “I was warned against using the furnace, lest the house explode.”

Situated on a steep hillside above Lake Champlain, Jan’s old house is two and a half stories, about 3,200 square feet inside with a wraparound porch on the front and side. In a late Victorian neighborhood in Burlington, Vermont, this house boasts its original slate roof and fish-scale wood shingles in the attic gable.

“I had never owned an old house; most recently I’d been living in a condo,” Jan explains. “But I knew I wanted a real home where my children could visit, with a small garden. When I walked into this one, I fell in love. Afterwards, I realized that it leaked air all over the place. The wiring was original, which was not so good.” 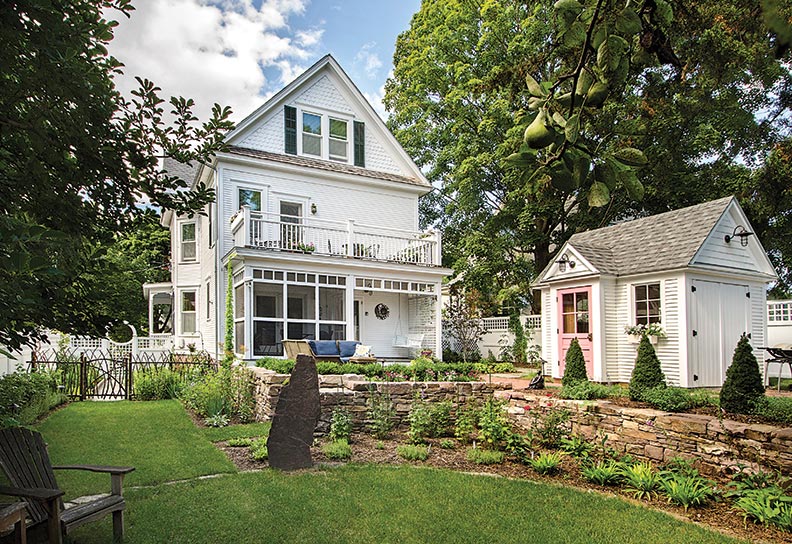 Fortunately, Jan knew professionals who appreciate old houses. She assembled a team that included architect Bill Maclay, interior designer Cecilia Redmond, and landscape architect Cynthia Knauf. Together, they introduced 21st-century comfort and function into the 19th-century house without obliterating its integrity or its personality.

“Jan’s house just needed some TLC,” recalls Cecilia, who trained in Ireland and London before she moved to Vermont 14 years ago. “She has great appreciation for Victorian design, but she is also a 21st-century woman.”

Jan explains that Bill designed the LEED-certified building that houses her company’s headquarters. “It’s incredibly important to take the good buildings in our historic neighborhoods and make them efficient,” says the Vermont architect. “If we don’t insulate them, people can’t afford to heat them, and they’re abandoned.”

In the case of Jan’s house, the historic exterior was in fine shape. So the inside walls, where little original plaster remained, were taken down to the studs, and foam insulation was sprayed into the double-stud cavity. “We kept all the original trim and hardware,” Bill says.

Spray foam was added to existing cellulose insulation at the roof, and the existing stone foundation got spray foam insulation, along with improved drainage. Rotted windows were replaced with wood-clad R5 triple-pane versions. The “deep energy retrofit” brought the heating Energy Use Index from 54 kBTU a year to just 23 kBTU.

“We did not tamper with the scale and proportion of rooms downstairs,” says Cecilia, who chose muted shades of gold, green, and blue for the interior. For the dining room, she found block-printed Zoffany wallpaper in a lovely aqua that reminded Jan of a dining room she’d seen in a French chateau.

Burlington landscape architect Cynthia Knauf transformed the backyard into a garden sanctuary: “In an area of not even a quarter acre, we created different flat levels and outdoor spaces,” she says. “The upper-level brick patio is an extension of rooms inside.”

“I love everything about my house,” Jan smiles. “Its warmth comes from the juxtaposition of historic preservation and energy efficiency.”