There are more First Period houses—dating from about 1650 to 1725—in New England than anywhere else in the U.S. That doesn’t mean finding the right one is easy, particularly if one’s standards are high, and if the house must be in a town on the coast. It took Peter Scala and George Irving seven years of hunting to find this one.

“At the time, we lived out of the area . . . whenever our agent told us a house with good potential was on the market, by the time we got there, it was sold,” Peter recalls. “One morning in 1997, I got a call: Our agent had found exactly what we were looking for in Essex, Massachusetts.” She suggested Peter take a look at the exterior. “When I saw it and the lake behind it, I knew—without having been inside—that this was the one.” 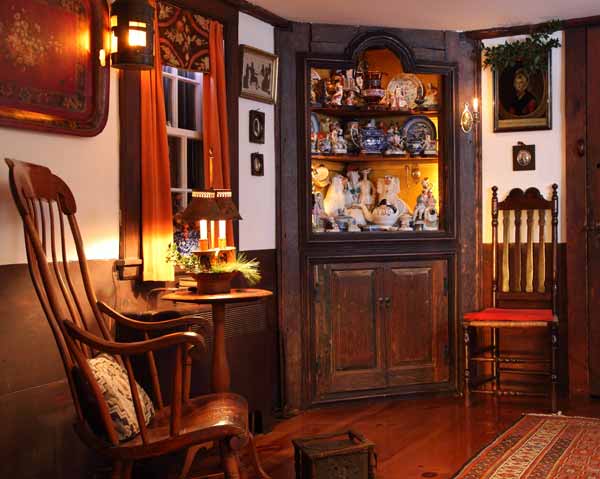 It was George and Peter’s lucky day, as the 1684 Saltbox on nine-plus acres remained unsold, and it was in move-in condition. Former owners had almost completed its restoration and maintained the house well, leaving mostly cosmetic tasks. “The first thing I did,” Peter says, “was pull up the wall-to-wall and install wide-plank pine flooring.”

Peter already had been a long-time collector of early English furnishings and art, which would be appropriate and beautifully displayed in this house. Acting as the primary interior designer, Peter placed his antique collections throughout the Saltbox and its extensions. He chose richly textured, warm-colored fabrics for upholstered pieces, warming the English colonial house with a touch of Colonial Revival comfort.

Much of the elegant wall paneling is original to the earliest part of the Saltbox. Peter added what appear to be built-in cabinets, all made of reclaimed wood and pieces of early furniture. For example, in the main hall (or great room), he’d coveted a corner cabinet that came up at auction—a perfect fit size-wise, historically, and aesthetically. But the bidding started at $32,000, well above his budget. Peter came home thinking, “If I can’t buy it, I’ll make it.” Using wood found in the attic, he made an almost identical cupboard to the one lost. He’d never been much of a carpenter before, but, Peter says, “I was furious that I couldn’t get the piece I wanted, so I was determined to have one just like it.”

An antique cupboard that Peter already owned was right for the living room, but it was too tall for the low-ceilinged old room. Peter carefully removed and stored the feet to make the piece fit.

On a cold and blustery evening in December, with two feet of snow forecast, the historic house glows from within as candles are lit and fires laid. Rooms appear unchanged over the centuries. Peter and George have no need to be anywhere else.