Bill Barker is a true time traveler. One day he’s jogging along in sweats and sneakers, and the next he’s strolling down a 1740s street in handmade silver-buckled shoes to a tavern he calls home on Duke of Gloucester Street in the heart of Colonial Williamsburg, Virginia.

A professional actor with an uncanny resemblance to Thomas Jefferson, Barker makes a living portraying his 18th-century look-alike at Colonial Williamsburg. He is among the approximately 80 employees who rent living quarters in houses, shops, kitchens, and laundries that are either some of Williamsburg’s 88 original restored Colonial buildings, or, in Barker’s case, structures painstakingly reconstructed from information found in early records. 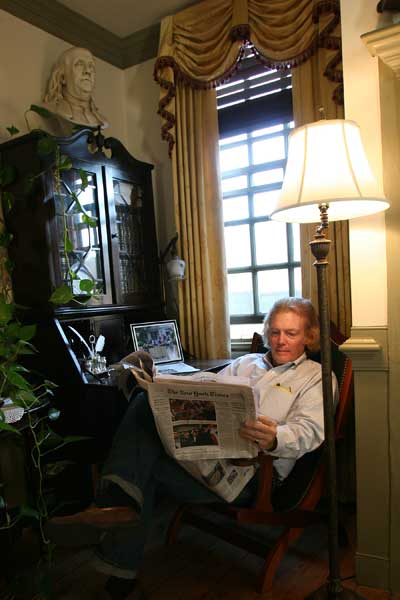 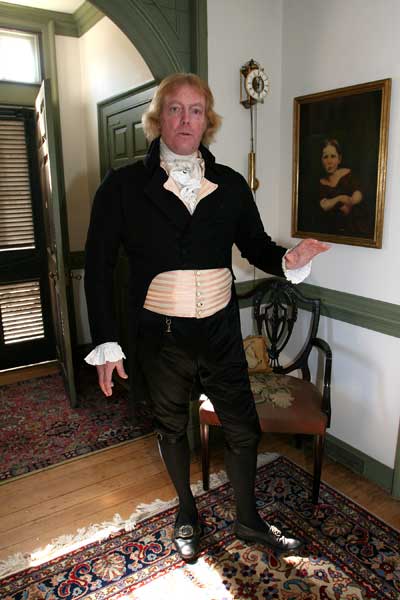 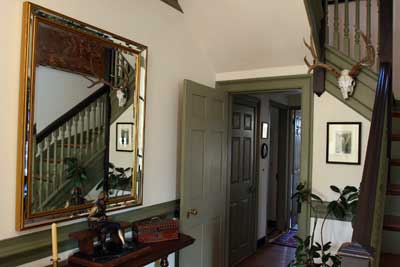 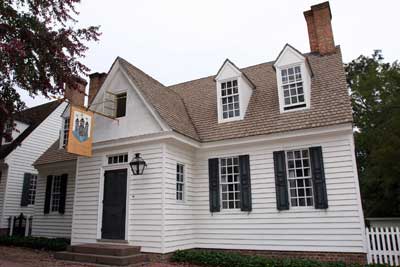 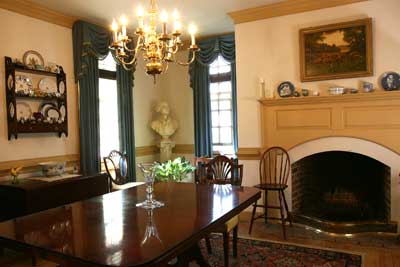 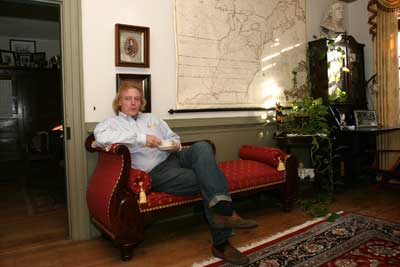 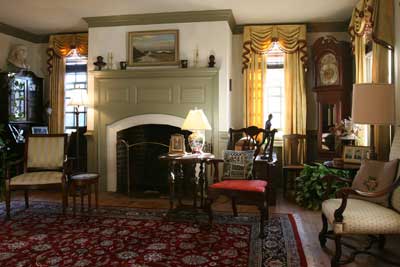 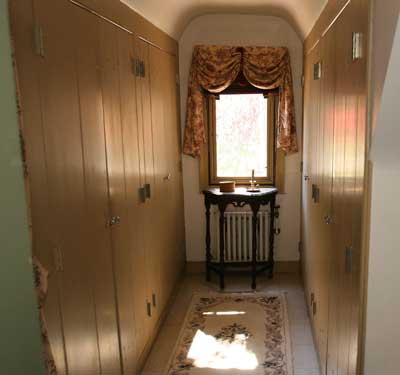 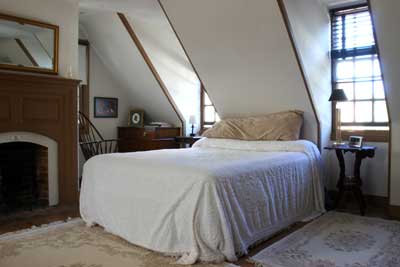 At Home in a Castle

Barker’s home is literally a castle, according to the swinging sign out front, which reads “Edinburgh Castle.” As an 18th-century common tavern, the building offered its patrons gambling, drinking, food, and lodging. Located only yards away from the capitol building, its ten beds probably were in full use in April and October, when the legislature and courts met, bringing people of every stripe to Williamsburg. The tavern was rebuilt on its original foundation in 1941. Thanks to a property-line dispute between John Burdett, the tavern’s original owner, and his neighbor, a detailed sketch of the building—including its unusual projecting front porch chamber—remained in Colonial Williamsburg’s possession. This surviving document made accurate reconstruction possible. Like many of Williamsburg’s reconstructed buildings, a number of the pieces used were salvaged from derelict buildings across the Chesapeake region dating to the same timeframe.

“It’s an incredible privilege to live here,” says Barker, lounging comfortably on an antique settee. “The beauty of Colonial architecture is the utilization of space. I really admire its efficiency and intimacy. You can close off spaces for specific uses and, of course, in cold weather for efficient heating. I had never lived in a house with a fireplace in every room.” Barker also notes that looks can be deceiving in these well-thought-out old houses. “When you step inside these buildings, they are twice as big as they appear. The nooks and crannies and benches and uses of space are just brilliant.”

Barker seems destined to be here. He grew up as the eldest of three boys and traveled with his family on road trips from their home in Philadelphia to historic sites. “We often visited Mount Vernon, Monticello, Williamsburg, and Jamestown. My family was devoted to history and fascinated by Jefferson.” A history major at Villanova, Barker’s professional persona as Jefferson has turned him into a scholar on the life of the man who was educated down the street at The College of William & Mary and lived in Williamsburg as Virginia’s second elected governor until he moved the capitol to Richmond in 1780. After college, Barker became a professional actor, working on stage and as producer and director in Philadelphia and Washington, D.C., until an actor friend who role-played as William Penn told him, “You should do this. You look like Thomas Jefferson.” Barker was astounded. “Never in my wildest dreams did I think that, nor had anyone else ever said it!” But he portrayed Jefferson at a photo shoot at Independence Hall, and the calls started coming in.

In 1993, Barker was hired to portray Jefferson in a summer program series at Colonial Williamsburg commemorating the 250th anniversary of the former president’s birth. Two years later, he moved into Edinburgh Castle.

Since he arrived, Barker has always been conscious of being the caretaker of the building. While the maintenance on Colonial Williamsburg’s buildings is carried out by a team of technicians, tenants serve an important function. “Renters are our eyes and ears on maintenance issues,” says Keith Johnson, director of property management, who oversees the rental program. Tenants are always on the lookout for any problems, and are asked to report them immediately to help keep larger repairs at bay. In addition, management meets with tenants twice a year to discuss the building. “Keith comes and sits with me and asks how it’s going,” explains Barker. “Usually, I prepare a list before he arrives, then we walk through the home and check everything out together.”

Renters living in the center of town also have a checklist of dos and don’ts; most involve keeping up historical appearances. The top three rules, according to Johnson, are: Put away modern toys, wagons, and bikes when not in use; store plastic lawn chairs; and position televisions so they can’t be seen through windows by people walking down the street. “I always make sure the building looks nice from the outdoors,” says Barker. “Keeping the building looking clean, and conforming with Williamsburg taste and ethics of architecture, are important.”

Tenants are free to furnish their homes however they choose, and Barker’s love of antiques has brought together an eclectic collection. “Antiques help me touch the past within my family and make me more appreciative of our own history,” he says.

The eldest piece in his collection is a small campaign chest from 1730-40. It is supplemented by period tables, seating pieces, his family’s dining room furnishings and memorabilia, and mid-Eastern rugs. His interest in antiques and his fascination with Jefferson have overlapped during his time here, as indicated by a copy of a Houdin bust of Jefferson. There also are some large framed pieces, notably a copy of the Frye-Jefferson map created by Jefferson’s father, Peter, and Joshua Frye, a William & Mary professor. Other items relating to Jefferson’s era are deer, antelope, and elk horns reminiscent of the collection accumulated by the Lewis and Clark expedition.

Barker’s love for all things historical—including old houses—was an advantage in being selected to live as a tenant on Colonial Williamsburg property. “It is a factor for people to have a background in historic houses, conservation experience, or experience living in a turn-of-the-last-century farm,” says Johnson, “because it helps them understand the issues around old houses.”

Barker finds living in the restored area invigorating. “There’s always something happening out there. The Fife and Drum Corps comes down the street, the ox cart rumbles past, and visitors stroll along, chatting together.” Or maybe the Queen of England rolls by, as she and Prince Philip did during their visit in 2007, providing Barker a photo of the couple in a carriage with himself standing on his front porch in the background, dressed as Jefferson, waving his tricorn hat in greeting.

“History helps us understand the past intellectually and gives us an understanding of where we are in the present,” he says. “I’ve always had a curiosity and fascination with old buildings—it’s wonderful to get to live in one.”

Patricia LaLandis a former Colonial Williamsburg employee. She lives, writes, and gardens in the town of Orange, Virginia.