More than a century ago, this artist’s family from New York began summering in a town later famous for a concert (which actually took place 90 miles away). Even then, Woodstock, New York, was a magnet for the artists, actors, and musicians of the avant-garde. | Now she is the owner of a compact, transitional folk Victorian/Arts & Crafts house on the side of a mountain nearby. She always knew she would return. “There’s no other place like it,” says the bright, energetic Midwesterner. “My mother would say, ‘First there were Bohemians. Then there were the Beatniks. Then in the Sixties it was the hippies.’ So Woodstock has been this way for a long time.”

When she began searching for a permanent home 12 years ago, her only desire was a small house on a pretty piece of land. “This was the only house I saw that really met that criteria.”

No one had said anything about a view. When she first arrived at the house, however, she wasn’t sure she even needed to see inside before making an offer. Picturesquely set on a level lot that slopes gently down to pockets of meadow and woodlands, the house commands an extraordinary 50-mile swath of countryside that encompasses the vast Ashokan Reservoir, the water supply for New York City, as well as a local landmark, Skytop Tower at Mohonk Reserve, 25 miles to the south.

Sited on property in a bowl with sweeping south-facing views, the house is filled with sunshine. Light pours into almost every cranny. “There are huge light shifts in every room,” says the owner, noting that a paint color that looks brown in some lights turns purple in others.

Trim colors were especially challenging, with tints that work in some lights clashing in others. “I seem to perceive more color differences than other people,” she says. Painting the exterior has been a multi-year exercise in painstaking trial and error. “I had to test at least eight different colors in order to find one I could live with.”

Inside, all of the rooms are small but nicely proportioned with high ceilings. The house has a typical turn-of-the-20th-century layout. There’s a side hall entry with the main parlor to the right and a staircase in its original unpainted chestnut leading up at the left. The parlor connects to a kitchen last renovated in the 1940s or ’50s—the cabinets are Lustron- era steel with shiny recessed pulls—which in turn opens onto a dining room that doubles as a music room. 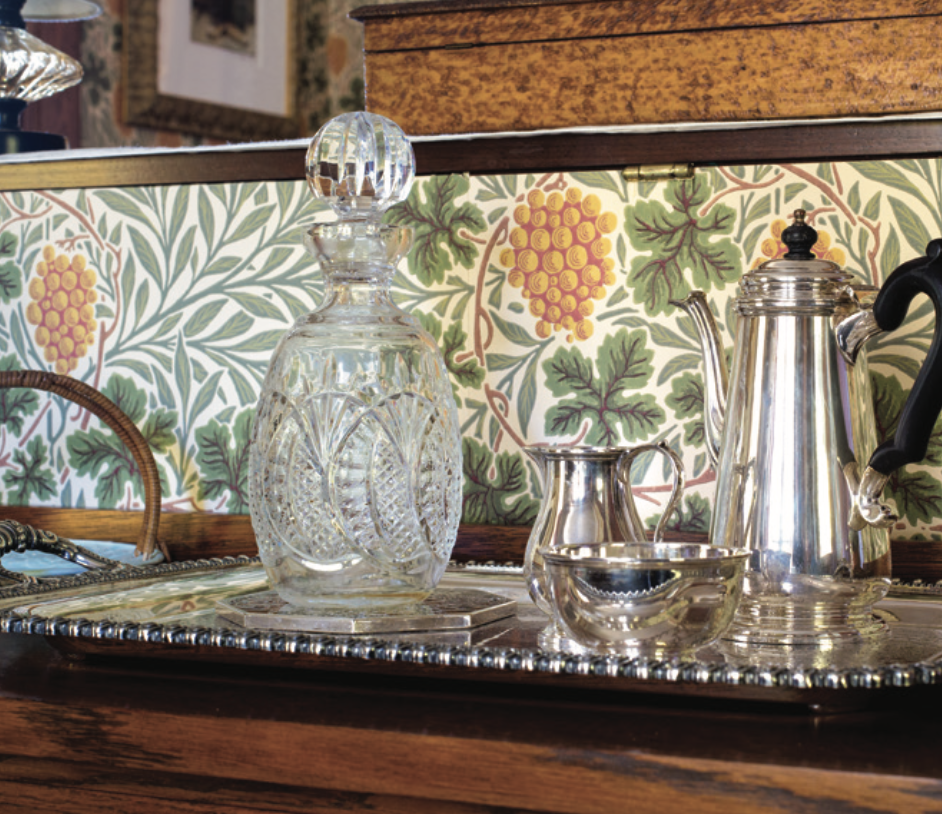 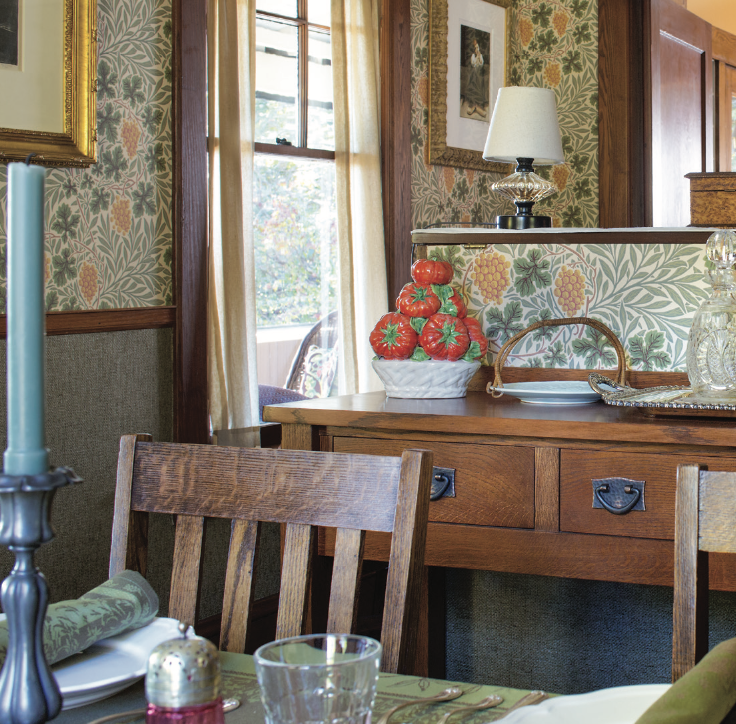 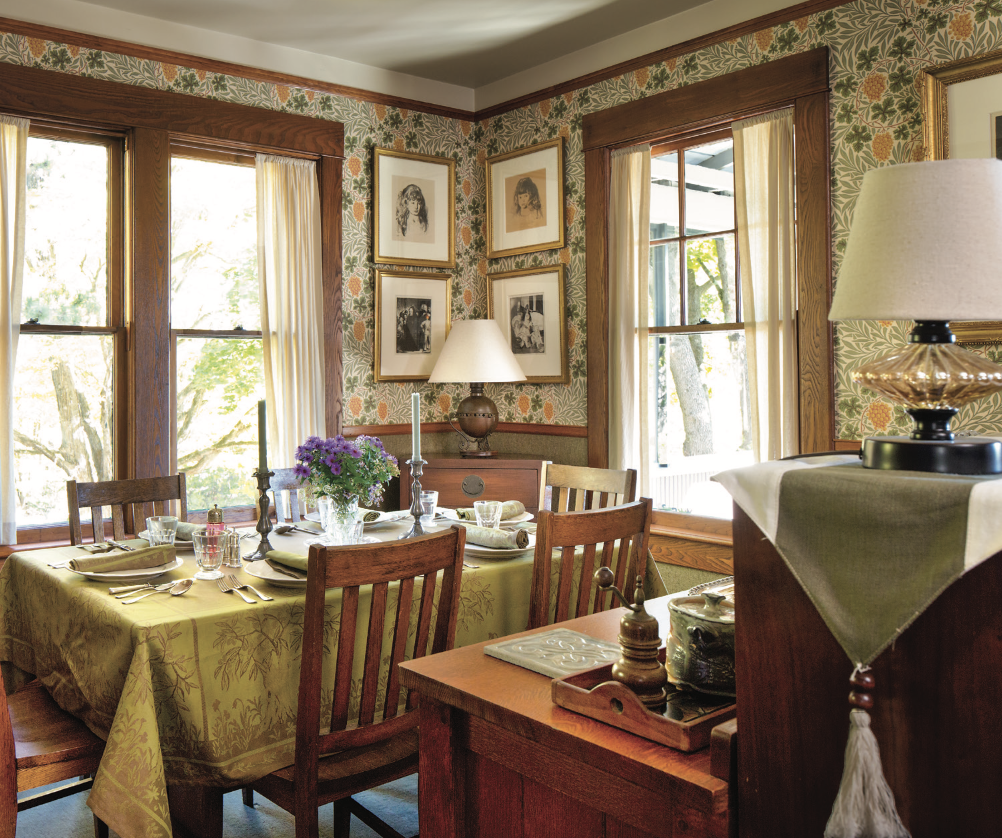 “Most people assume anything old is really well built,” says the owner. Though this house is at least a century old, it was constructed as a summer house. Parts of it are cobbled together with materials that came easily to hand. The walls are an older form of drywall, which was a plus after she stripped wallpaper: they were easily repaired with a skim coat.

The front porch roof sheathing was also original, but no beauty: it had been put together with mismatched pieces of scrap wood, tree branches, and sheet metal. The ashing over the kitchen win- dow is an old Quaker Oil sign. “The house may be old, but they wasted nothing.

“When I first bought the house, all the walls were white. I really wanted mid tones to dark to complement the woodwork.” Saturated colors on the walls play up the rich tones of the original chestnut and fir woodwork and collections of paintings and family pictures. Apparently, there were a lot of artists in the family, and it’s easy to mistake a family portrait photo in the upstairs hall for Myrna Loy in one of her “Thin Man” movie concoctions of the 1930s and ’40s.

Speaking of Myrna Loy, the owner was startled while watching TV one night to see an awfully familiar-looking kitchen in one of the series’ later movies. “My kitchen came straight out of ‘The Thin Man Goes Home’, from 1945!”

She had previously lived in St. Louis, Missouri, in a three-storey architect designed townhouse. That one was perfect for her role as a single mother: “It looked old, but it wasn’t,” she says. “I loved that.”

A long exit from her career in the Midwest gave her time to consider what possessions, if any, she would bring with her when she finally made her move. Ultimately, “the only things I moved from St. Louis were paintings and books. The first night I was here, I slept on the floor with a blanket and pillow.”

With an eclectic yet discerning eye, she furnished the house with vintage treasures that fit specifically into the compact floor plan. Most were acquired inexpensively. An exception is the chestnut living room coffee table, which is French. “I just instantly knew I should buy it.” The top slides out for impromptu meals.

Many, many items came from eBay, and quite a number were acquired at the local dump. There are a few family pieces, notably a purely decorative ceramic piece crowned with tomatoes resting on the dining-room sideboard. Her father, she says, was a bit thrifty, even when it came to buying his wife presents. “My mother’s strategy, whenever she wanted something, was to buy it for him.”

Besotted with the tomatoes, she bought the colorful piece as a present one December. “When my father opened it on Christmas morning, we all—my brothers and I—burst out in gales of laughter.”

She’s able to laugh at herself with just as much glee. The ‘Strawberry Thief’ pillows on the sofa in the living room came from Red House, the home Philip Webb designed for William Morris in Bexleyheath. The pillows were reasonably priced, “but it probably cost me $200 to ship them,” she says. “So I call them the world’s most expensive pillows.”